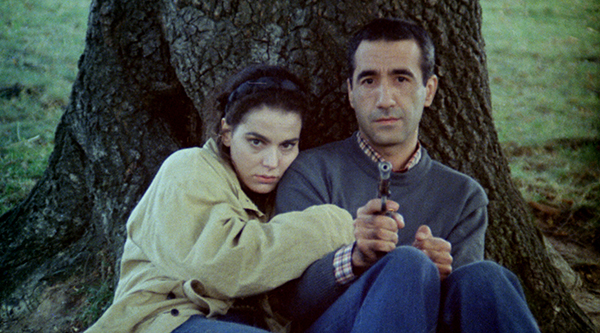 Washington premiere of the restoration

After the fall of communism in Romania in 1989, Pintilie returned to Bucharest and became director of national film production for the Ministry of Culture. The Oak, his first film after returning home, follows Nela, a young schoolteacher, after the death of her father, an official with the country's secret police. On an uneasy odyssey through Romania, she carries his ashes in a Nescafe jar. After many surreal moments depicting the end of Nicolae Ceauşescu's regime, Nela meets a doctor named Mitica. His anti-authoritarian nature makes them instantaneous comrades in arms, but a sequence of surprises works against them, and for a while, nothing seems to go right. "A dada couple in a dangerously absurd world." — J. Hoberman (1992, subtitles, 105 minutes)