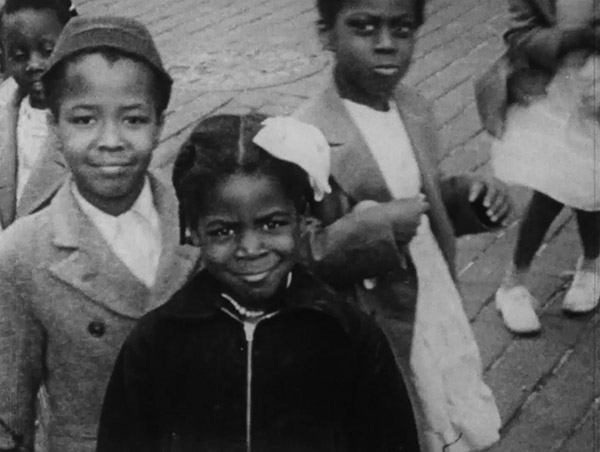 In the Street and Figure and I

Photographer Helen Levitt’s iconic 1948 short film In the Street is coupled with artist Lynne Sachs’s Figure and I, a new work inspired by the exhibition The New Woman Behind the Camera.

In the Street
In the Street was originally a silent film, filmed and edited in Spanish Harlem (New York City) by well-known photographer Helen Levitt, with some footage by Janice Loeb and James Agee. A piano score by Arthur Kleiner was added in the 1950s and circulated with the film. More recently, silent-music composer and performer Ben Model was invited by the Metropolitan Museum of Art to create a new piano score for the film. Model says he tried to “find the human moment that was happening in the shots and brief sequences” and “aimed to create music for these moments that might help [the audience] connect with it, without reinterpreting it.” (Helen Levitt, 1948, 16 minutes)

Figure and I
“[Indie recording artist] Kristine Leschper wrote to me with a very intriguing proposition: create a short film in response to her song “Figure and I.” I knew that this deeply rhythmic two-minute song needed . . . somatic imagery. I needed to move with my body and my camera as I was shooting it.  A few days later, I went to the New Woman Behind the Camera exhibition at the Metropolitan Museum of Art in New York City.  I saw two photos by two women photographers from the 1920s whose work I had never seen before. These images guided me to a way of interpreting the physicality and the intimacy of Kristine’s song.”—Lynne Sachs (2021, 2.5 minutes)