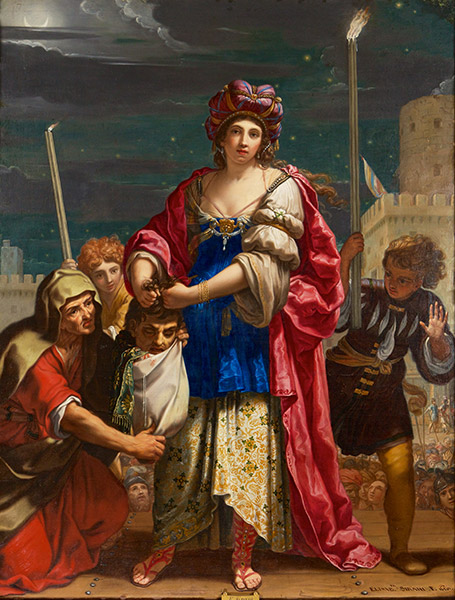 Elisabetta Sirani, Self-Portrait as Judith Showing the Head of Holofernes to the Israelites, signed and dated 1658, oil on canvas, Burghley House, Stamford, UK

“More perfect and excellent than men”: The Women Artists of Bologna

Early modern Bologna was exceptional for its many talented women artists. Thanks to a long-standing tradition of honoring accomplished women, several attentive artistic biographers, strong local interest in collecting women’s work, and permissive attitudes toward women studying with male artists who were not family members, Bologna was home to more women artists than any other city in early modern Italy. Bolognese women artists were unusual not only for their large numbers but also for their varied specializations and frequent public success. They painted altarpieces, nudes, mythologies, allegories, portraits, and self-portraits, creating sculptures, drawings, prints, embroidery, and paintings. This lecture challenges some common assumptions about women artists, suggesting productive approaches for future research.

This lecture will premiere at 8:00 a.m. on Friday, November 5, with closed-captioning, on both the National Gallery’s website and YouTube channel, where it will be archived.

The event on Friday, November 5, 1:00 p.m.–2:45 p.m., with live closed-captioning, will present the prerecorded lecture in full, followed by a live Q&A with the lecturer. Registration for this event is required.

Babette Bohn, professor of art history at Texas Christian University, is a specialist on Bolognese art. Professor Bohn received her BA from Northwestern University, her MA from Boston University, and her PhD from Columbia University. Her most recent book, Women Artists, Their Patrons, and Their Publics in Early Modern Bologna, was published earlier this year by the Pennsylvania State University Press. Her eight other books include two important studies of Bolognese drawings: Le “Stanze” di Guido Reni: Disegni del maestro e della scuola (2008), an exhibition catalogue for the Uffizi Gallery in Florence, and Ludovico Carracci and the Art of Drawing (2004). Professor Bohn is also an award-winning lecturer who has taught a range of undergraduate and graduate courses in art history and feminist studies. After many years of scholarship devoted to works on paper by prominent male artists, Professor Bohn’s interests have turned increasingly to issues of gender, studying women artists and the portrayal of women in Italian art. She has contributed to several exhibitions on women artists, beginning with a major monographic exhibition on Elisabetta Sirani in 2004 and most recently an exhibition on Italian women artists currently at the Wadsworth Atheneum Museum of Art in Hartford, Connecticut. Her current research expands into Italian cities beyond Bologna, examining women’s artistic education, their production of drawings, and the role of gender in shaping attitudes toward women artists after their deaths.

This is the twenty-fifth annual lecture offered by the National Gallery of Art in this endowed series named after Sydney J. Freedberg (1914–1997), the great specialist of Italian art.