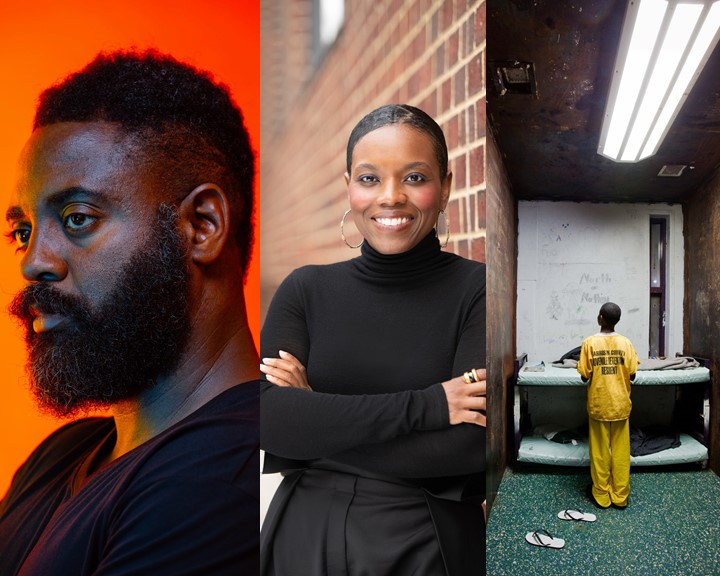 “the artifice of justice”

In a previously recorded conversation, artist Richard Ross; Candice C. Jones, president and CEO of Public Welfare Foundation; and poet and legal scholar Reginald Dwayne Betts discuss the role of the arts in eliciting, supporting, perhaps demanding social change. Together, as activists and artists, they unpack the complex interplay between art, institutions, and advocacy. An award-winning memoirist and poet, Betts has written extensively on the American legal and justice system, telling his own stories of injustice and bringing to light those of others. He conceptualized and brought to life—through a joint partnership with Yale Law School’s Justice Collaboratory and support from the Andrew W. Mellon Foundation—the Million Book Project, which will distribute a curated 500-book collection to 1,000 medium- and maximum-security prisons across every state. “the artifice of justice” is a phrase from Betts’s poem titled “When I Think of Tamir Rice While Driving,” published in Felon: poems. Prior to Jones’s work leading the Public Welfare Foundation, which aims to build a justice system that is community led, restorative, and racially just, she served as director of the Illinois Department of Juvenile Justice, pushing major reforms to reduce the number of youth in state custody. Jones, as a White House Fellow, created the strategy that restored access to Pell grants to youth and adults in correctional settings. Award-winning artist Ross created Juvenile-in-Justice, a collection of photographs, interviews, audio documents, and texts created over a dozen years, drawn from the lives of more than 1,000 incarcerated kids. The project humanizes the statistics about children in the justice system and tells their stories. Relying on their experiences, Betts, Jones, and Ross describe how art can facilitate change by shifting the imagination and enabling others to be understood anew.

This event will premiere on January 29 at 1:00pm with closed captions on the Gallery's YouTube site, and the audio and video will be archived on the Gallery’s website.