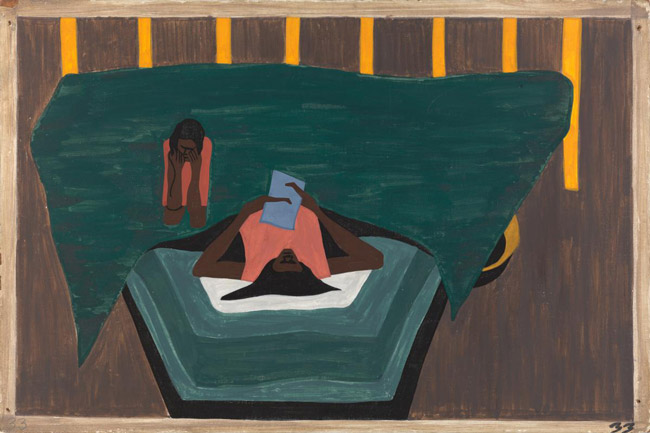 Jacob Lawrence, The Migration Series, Panel No. 33: Letters from Relatives in the North Told of the Better Life There (detail), between 1940 and 1941, casein tempera on hardboard, The Phillips Collection, Washington, DC, Acquired 1942. © 2022 The Jacob and Gwendolyn Knight Lawrence Foundation, Seattle / Artists Rights Society (ARS), New York

Register Now
From the series A. W. Mellon Lectures in the Fine Arts

This is the second talk of the six-part series Colorstruck! Painting, Pigment, Affect, presented by Richard J. Powell of Duke University for the 71st A. W. Mellon Lectures in the Fine Arts. Learn more about the series.

The Bauhaus artist and theorist Josef Albers declared that a color’s quintessence “is of less concern than what it does.” Richard J. Powell’s talk revisits this idea through the cool and relatively modern color viridian. A dark green-blue hue, viridian and its professed theatricality were not only commented upon by Albers, but also “cast” in countless paintings by artist Jacob Lawrence, a looming 20th-century figure of narrative art and visual modernism.

Registration is required to attend in person or virtually.