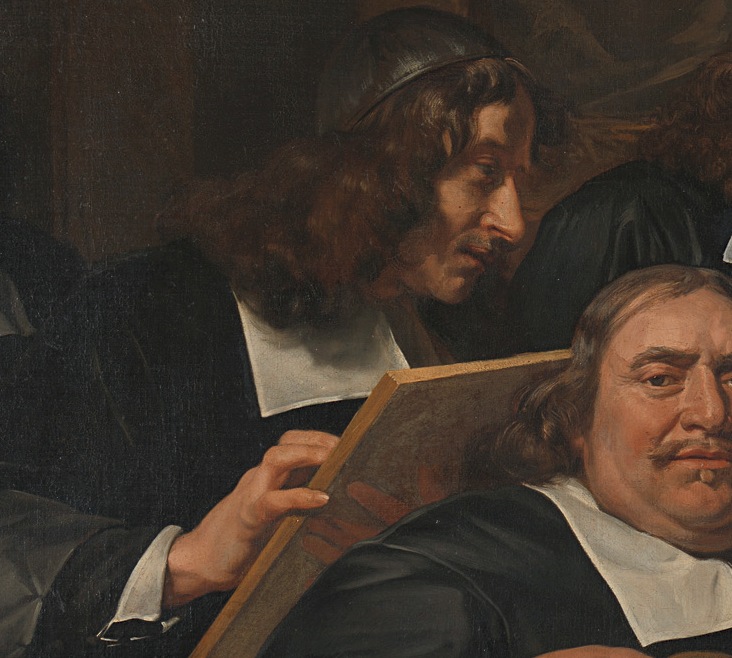 Jan de Bray was born in Haarlem into a creative, cultured family. His father, Salomon de Bray (1597–1664), with whom he presumably studied, was a painter and architect who helped establish the Saint Luke’s Guild in Haarlem in the 1630s. He was also a poet and a member of a rhetoricians' society in the city. Jan’s mother, Anna Westerbaen (c. 1605–1663), who came from The Hague, was the sister of the poet and physician Jacob Westerbaen (c. 1600–1670) and of the portrait painter Jan Westerbaen (c. 1600–after 1677), who may well have instructed Jan de Bray in the art of portraiture.[1] Two of De Bray’s brothers, and Joseph de Bray (c. 1632–1664), were also painters.

Tragedy struck the family when both of Jan’s parents, whom he represented in an imposing double portrait (see ), and four of his siblings, including Joseph, died in a plague that ravaged Haarlem from 1663 to 1664. Jan suffered further personal losses when each of his three marriages ended in the untimely death of his wife, all of whom shared the artist’s Catholic faith. De Bray lost his first wife, Maria van Hees, in 1669, the year after their marriage. His second wife, Margaretha de Meyer, died in 1673, within a year of their wedding. He married his third wife, Victoria Magdalena Stalpert van der Wielen, in 1678, but he became a widower yet again when she died in childbirth in 1680.[2]

Despite the tragedies of his personal life, De Bray pursued a successful artistic career in Haarlem, where he was named dean of the Saint Luke’s Guild several times in the 1670s and 1680s. He was one of the foremost Dutch artists working in the classical tradition, a style of painting in Holland that fused naturalism with ideals of beauty that originated in antiquity. De Bray was also an architect and an inventor, but he was foremost a painter of portraits and historical subjects. Often he blended these two genres in what is known as the portrait historié, or historicized portrait. Works of this type portrayed contemporary individuals in the guise of figures from the Bible, mythology, or ancient history and literature, thereby drawing parallels between the virtues of the sitters and those of the historical personages.

In 1686 De Bray moved to Amsterdam and helped design a freshwater reservoir near the Amstel River in 1688. A year later he suffered financial setbacks and was forced to declare bankruptcy. By 1692 his fortunes had sufficiently rebounded for him to be granted citizenship in Amsterdam. Although he remained in that city for the rest of his life, after his death his body was brought back to Haarlem, where he was buried on April 4, 1697.

[2] Although no known portraits of Margaretha exist, De Bray depicted Maria in 1668 in a portrait historié of the couple as Ulysses and Penelope that he painted in the year of their marriage. Similarly, in 1678, the year of his third marriage, he portrayed Victoria Magdalena as Mary Magdalene, after whom she was named. For these images, see Arthur K. Wheelock Jr., Jan de Bray and the Classical Tradition, exh. brochure (Washington, DC, 2004), nos. 4, 5.