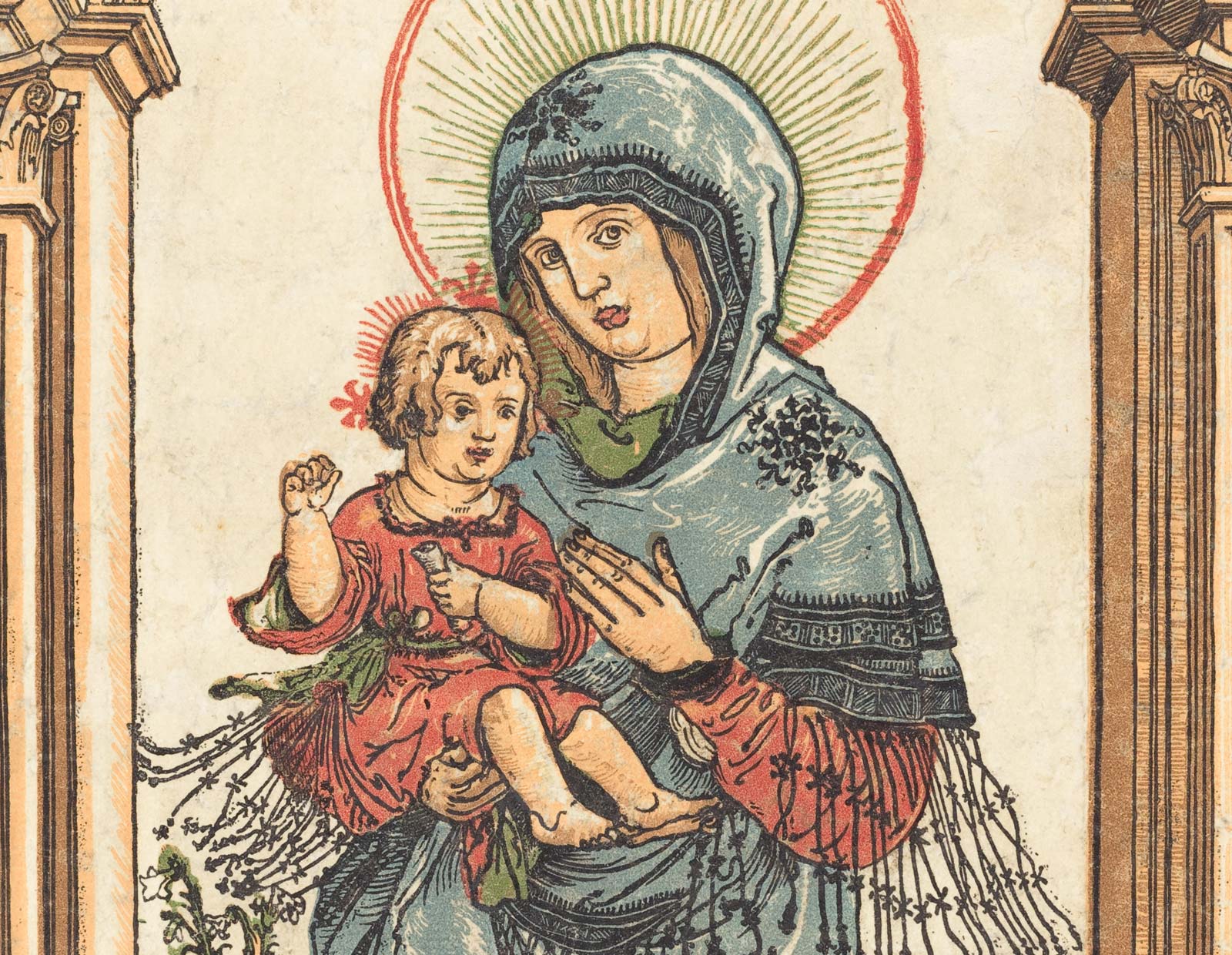 The Beautiful Virgin of Regensburg

Altdorfer’s Beautiful Virgin is an experimental milestone in the history of printmaking, but it is also an artifact of an ugly episode of anti-Semitism.

Color enlivens the Virgin and Child in this woodblock, accents their haloes, and decorates the frame that surrounds them. The shades are basic, and the registration is not perfect. Still, this is something new in color printing. It is perhaps the earliest woodblock whose color was not applied by hand, with brushes or stencils, but by printing separate tone blocks, one for each of the five colors in succession, with no overlap. Another block printed the black lines. Tone blocks let exploit the white of the paper by reserving some areas within the fields of color; he did this to render the foliate design in the green pilasters of the frame, for example, and to create highlights in the Virgin’s robe. Albrecht Altdorfer, The Beautiful Virgin of Regensburg on an Altar, c. 1519/1520

While the colored print of the half-length Virgin and child has something of the static and remote quality of an icon, other images of the Virgin created by Altdorfer have the curving grace and tenderness of what is called the German “soft style.”

Because Altdorfer colored the print with blocks rather than the less durable stencils that were commonly used, he could produce more copies and more quickly. It is this expediency that relates the work to an unsavory chapter in the history of 16th-century Europe. In the most crass terms, the was made to cash in. It was among the goods—devotional prints (including at least six others by Altdorfer), pamphlets, badges, and other tokens—that were hastily produced for sale to a great influx of pilgrims who began arriving in Regensburg in 1519. In the span of some five years, hundreds of thousands of people visited the shrine of the Beautiful Virgin, which had been built atop the ruins of the town’s razed synagogue.

Tensions between Christians and Jews had existed in Regensburg for decades. As in many places across Europe, the town’s Jewish residents were blamed for an economic downturn that occurred in the late 15th and early 16th centuries. Earlier there had been accusations of ritual murder; now disputes centered mostly on money lending and economic competition. Jews in Regensburg, which was an imperial city, were under the legal protection of the emperor (who extracted heavy taxes in exchange for this privilege). When Maximilian I died in January 1519, the town council, of which Altdorfer was a member, lost no time: in February they voted to expel the Jews. A community of about 500 people was forced from homes and businesses in a matter of days. They were ordered to evacuate the synagogue within hours. An unruly mob immediately tore down the Gothic structure—a building that Altdorfer recorded in two etchings.

These are molds used to cast lead or silver badges that, like the prints, were sold to pilgrims to the Regensburg shrine. Altdorfer produced designs for them. A contemporary account relates that supplies ran low in the first year of the pilgrimage and that people wept when they had to return home empty-handed. The next year 109,108 clay tokens were manufactured, along with 9,763 silver ones.

These two etchings of the Regensburg synagogue before its destruction are the first northern prints known that were made expressly to record a particular building. They represent the beginning of a long tradition of topographical prints that subsequent generations of printmakers would explore. Whatever motive Altdorfer might have had in recording the synagogue, beyond simply making a factual record, is impossible to know. Probably he acted quickly, perhaps basing the prints on drawings made in the interval between the council’s decision and the building’s destruction. His decision to etch them—etching is a much quicker process than engraving—argues for a hasty execution. Altdorfer did not only make print copies of the Beautiful Virgin. Earlier, he had made this reproduction in paint. Both the original icon and his painted copy remain in Regensburg today. The icon was believed to have been painted from life by Saint Luke, but was surely a product of the 13th century. It is one of hundreds of venerable images that were associated with the saint and ascribed miraculous powers. Before the events of 1519, however, the Regensburg Virgin had apparently not received much attention. It was elevated from obscurity only by the fervor generated by the new miracles—and the anti-Jewish violence. The inscription on the Beautiful Virgin print, repeated three times, emphasizes her purity: “You are of perfect beauty my love, and there is no blemish on you. Ave Maria.” Pilgrims would have understood a subtext immediately, recognizing the contrast implied between the stainless Virgin and the “diabolical influence” of the synagogue her shrine replaced. After the early 1500s, the Beautiful Virgin returned to obscurity. The 13th-century icon was only rediscovered, hidden under layers of overpaint, in the 1930s.

For those who came to venerate the Beautiful Virgin and ask her help, all the images of her—the original icon, Altdorfer’s painted copy, the prints, the tokens—were imbued with the same spiritual power. Prints were not simply mementos of pilgrimage but also devotional objects in their own right. They made the miracle-working image accessible to a wider population and, of course, were portable. A portrait by Petrus Christus illustrates a similar print as it would have been used at home. The fact that these prints were tacked to walls and handled by men and women while making their devotions made their survival fairly rare in spite of the thousands that must have been produced. Several examples of this Beautiful Virgin print are known, many printed with fewer tone blocks and some with the black line block only.

Jacob Kern, a stonemason, was grievously injured in the melee, either from a fall or by a collapsing beam. He was given no chance for survival, but his wife prayed fervently to the Beautiful Virgin, and Jacob recovered. Known in German as the Schöne Maria, this was a venerated painting of the Virgin and Child from the 13th century. Jacob had believed himself in no danger, because, he said, the Virgin had held his hand during the entire ordeal. News spread quickly about the miracle-working image. Soon there were 54 miracles reported, then 74. The pope granted an indulgence of 100 days for devotions made in front of the Beautiful Virgin, and pilgrims arrived in droves. “All sorts of people came,” one witness noted: “some with musical instruments, some with pitchforks and rakes; women came with their milk cans, spindles and cooking pots. Artisans came with their tools: a weaver with his shuttle, a carpenter with his square, a cooper with his measuring tape. They walked many miles, but did not tire from the long journey. They all walked in silence. If asked why there were going, they answered: My spirit drives me there."

Within a month, a wooden chapel was built on the site of the synagogue, and the painting was transferred to it, set within a marble frame. Outside, a standing statue of the Virgin was also erected. Both are recorded in a woodcut by Altdorfer’s younger contemporary Michael Ostendorfer. Also clear in Ostendorfer’s print is the extreme nature of the pilgrims’ devotion. Many are prostrate on the ground, others strain toward the statue. Clothing that came in contact with the statue was said to be effective in curing sick cattle. Contemporary accounts reported that parties of pilgrims arriving from outlying areas would elect one of their number to disrobe outside the town walls and approach the shrine naked.

Protestant leaders in the region viewed this level of religious frenzy with suspicion and disapproval, fearing it as socially destabilizing. Moreover, they judged it another example of cynical chicanery from Rome intended to exploit the poor and uneducated. Martin Luther expressed his opposition in unequivocal terms: “The chapels in forest and the churches in fields, is as Wilsnack, Steinber, Trier, the Grimmenthal, and now Regensburg and a goodly number of others which recently have become the goal of pilgrimages, must be leveled.... The miracles that happen in these places prove nothing, for the evil spirit can also work miracles as Christ has told us in Matthew 24.” Albrecht Dürer owned a copy of the Ostendorfer print and annotated it with his own critical opinion of the motivation behind the shrine and its promotion by the town and church: ”This apparition has been set up against Holy Scripture at Regensberg and displayed by the Bishop, and for the sake of temporal profit not abolished. God help us that we not thus dishonor His esteemed Mother....”

Altdorfer would eventually embrace Protestantism, but his beliefs at the time he was making the Beautiful Virgin are not known; religious sentiment in southern Germany was especially fluid in the first years of the Reformation. Luther had posted the Ninety-Five Theses only in 1517. Printmakers played an important role in the religious upheavals that ensued, disseminating information and propaganda, on both sides of the religious debate, but they were also businessmen who naturally gauged opportunities for profit. By 1525, the fervor of devotion to the Beautiful Virgin had subsided and the pilgrims had stopped coming. A new stone church, largely funded by the sale of pilgrim goods,  was built to replace the wooden structure but was not completed until 1542, when it opened as Regensburg’s first Protestant church.

What was the future of Altdorfer’s experimental color block technique? While the artist’s synagogue etchings and his innovative landscape prints helped launch long lines of exploration by later printmakers, the color woodblock technique did not. Inexpensive popular prints continued to be colored with stencils. Some artists, notably Dürer, eschewed color altogether in their print works. Considering the astonishing lighting and three-dimensional effects Dürer achieved in these black-and-white images, Erasmus (a great admirer of the artist) wondered, “Is it not more wonderful to accomplish [them] without the blandishments of color....” Other print artists turned to the restricted color range of chiaroscuro woodcuts, which used a single tone block. Color printing of a type foreshadowed by Altdorfer’s Beautiful Virgin would have to wait for another century. The only portrait known of Altdorfer, who himself painted very few portraits, is this engraving from the seventeenth century.

Altdorfer’s career spanned a time of upheaval in northern Europe, as late medieval piety gave way to the Renaissance and Reformation. His innovative work, in several media and in sizes that range from postage-stamp sized etchings to wall murals, responds to and is witness to a changing society.

He was a painter and printmaker, and a prosperous and influential man in Regensburg, where he became a citizen in 1505. He may have been the son of a painter and miniaturist, Ulrich Altdorfer, but nothing is known of his training. He appears to have begun to make woodcuts around 1511, perhaps influenced by those of Dürer.

NGA Images
Download a digital image of this work

Altdorfer owned several vineyards and held various city positions. As city architect, he was responsible for the construction of municipal buildings and for reinforcing fortifications when the city was threatened by Ottoman forces. He received commissions from the emperor and delayed appointment as burgomaster (mayor) of Regensburg to complete a commission for the Duke of Bavaria. This painting, which depicted Alexander at the battle of Issos (Alte Pinakothek, Munich), is regarded as his greatest work. It reveals his taste for fantasy, brilliant color, manipulations of scale, and dazzling light. The scene takes place in a cosmic landscape; the figures are secondary in importance, actually and artistically.

Altdorfer’s lasting contribution was to introduce landscape as a subject worthy of art in its own right and not simply as a backdrop for something else. He painted the first independent landscapes and created the first landscape prints that were not tied narratives with figures. Also from Altdorfer came some of the first drawings known of identifiable places. His response to nature was expressive; for him nature appears as an active, animated presence.