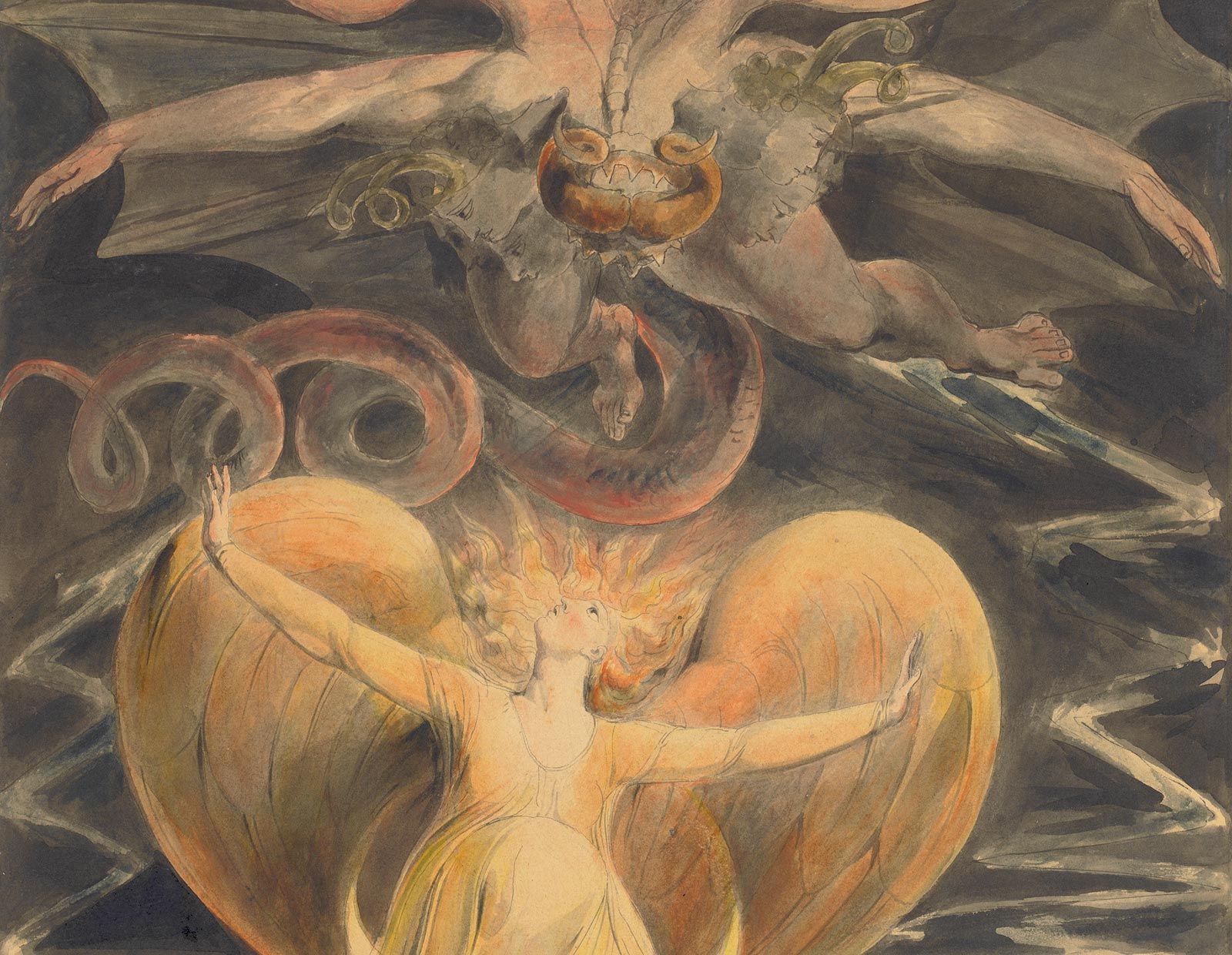 The Great Red Dragon and the Woman Clothed with the Sun

…I do not consider either the just, or the wicked, to be in a supreme state, but to be, every one of them, states of the sleep which the soul may fall into in its deadly dreams of good and evil, when it leaves Paradise following the serpent.

William Blake, “A Vision of the Last Judgement”

A cosmic battle between good and evil unfolds in this dramatic watercolor by romantic poet and visionary artist . Sweeping lines cross the drawing and evoke the zigzag flash of lightning, whoosh of a gale, and flap of wings, imbuing the scene with tension. The stakes are no less than the fate of humankind.

The book of Revelation, the final book of the New Testament, contains a series of warnings to Christians to maintain and guard their faith, then relates a series of allegorical episodes that demonstrate the consequences of spiritual defection. Blake’s illustrates passages that describe “an enormous red dragon with seven heads and ten horns and seven crowns on his heads” who descends upon “a woman clothed with the sun, with the moon under her feet and a crown of twelve stars on her head.” The dragon embodies Satan. His mission is to exact revenge on the woman who has given birth to a follower of God who will spread the Christian faith.

Sun bathes the woman’s figure and catches in the crescent sliver of moon on which she rests.  Darkness and shadow fill the sky above like a storm cloud as the dragon’s wings stir a great wind and sweep her hair upward, flamelike. Below, a rising deluge invoked by the dragon–intended to engulf the woman—overwhelms the figures of hapless souls. As the devil hovers to witness her demise, God grants her wings that carry her to safety. Yet the powerful image of the dragon’s outstretched arms and hers arcing toward each other in mirror image suggest that good and evil are a duality, like the dark and light sides of the moon, rather than completely independent forces.

The earth will open up to swallow the water, and the thwarted dragon will fly away to wage war against the woman’s progeny, the followers of God. For Blake, it is spiritual power—the purity and goodness represented by the woman—that always prevails, however horrific the circumstances.

Three other watercolors of the Great Dragon passages appear in a series of works made by Blake between 1805 and 1809 that is based on the book of Revelation. They are part of a larger group of tempera and watercolor paintings executed for Blake’s most important patron, Thomas Butts.

William Blake, The Great Red Dragon and the Beast from the Sea, c. 1805, pen and ink with watercolor over graphite, Rosenwald Collection, 1943.3.8997

William Blake, The Great Red Dragon and the Woman Clothed with the Sun, c. 1803-1805. Brooklyn Museum. The son of a middle-class tradesman in London, William Blake received vocational training rather than a classroom education. Enrolled in drawing school at age 10 and apprenticed to a master engraver of book illustrations and prints by 15, a steady and predictable print shop career awaited. Blake’s personal artistic inclinations—nourished by the importance of books and reading in his family—developed in parallel, and he began to write poetry around age 12. He later enrolled in the Royal Academy of Art to study painting but dropped out after a year, finding the teachings incompatible with the direction of his work. Gradually, Blake merged his writing with visual media—prints, watercolors, and drawings—in a uniquely expressive form of illuminated poetry. He eventually established his own commercial printing shop, which allowed him the freedom to use his own printing presses and self-publish his lavishly illustrated volumes.

Blake’s dedication to his personal art was ambitious and uncompromising. He was drawn to epic themes that gave expression to his deeply held beliefs about the fallen condition of humanity, the pervasiveness of evil and oppressive forces, and states of spiritual and moral crisis. His works make little reference to reality; they are images of a parallel cosmos held in Blake’s imagination. This alternate universe was fueled by his extensive reading of the Bible, mythology, Milton, and other literature but also reflected in his study of art history. During his training as an apprentice engraver, for example, he spent hours drawing the Gothic architecture of Westminster Abbey. There, he absorbed the lessons offered by the cathedral’s stylized forms, line, and symmetry, echoes of which can be seen in his art. Other sources—medieval illuminated manuscripts and the engravings of works by Renaissance artists such as , , and he studied—also proved important sources to Blake.

His work’s originality and sometimes graphic content as well as the eccentricity of his character led some of Blake’s peers to question his sanity and mental stability, according to contemporaneous accounts. The artist had visions of angels or spirits, the first of which occurred at age 10 when he saw “a tree filled with angels, bright angelic wings bespangling every bough like stars.” Such experiences were a source of inspiration for the artist and he recorded them in letters and writings.

Yet Blake did not live only in his own fantastical world. Much of his work responded to the events of the day. London in the final years of the 18th century had absorbed the foment of the American and French Revolutions, internal uprisings against class inequalities, and the transformations of the Industrial Revolution. Blake regarded such political and social shifts with suspicion, believing they foretold a coming apocalypse and subduing of humanity through new civic and technological orders.

Blake’s personal life was quiet. He married Catherine Boucher, who became his business partner and steadfast supporter. The couple did not have children. Blake found kinship with some artists of the day, including Henry Fuseli, Mary Wollstonecraft, and Percy Bysshe Shelley, but he had only a few steady patrons and died in financial distress. Artists later in the century, especially the British Pre-Raphaelites and later the surrealists, found inspiration in Blake’s original and visionary art. Over the course of the 20th century Blake assumed a place next to and as one of Britain’s greatest artists, his statue placed in the Poet’s Corner of Westminster Abbey on the 200th anniversary of his birth in 1957.