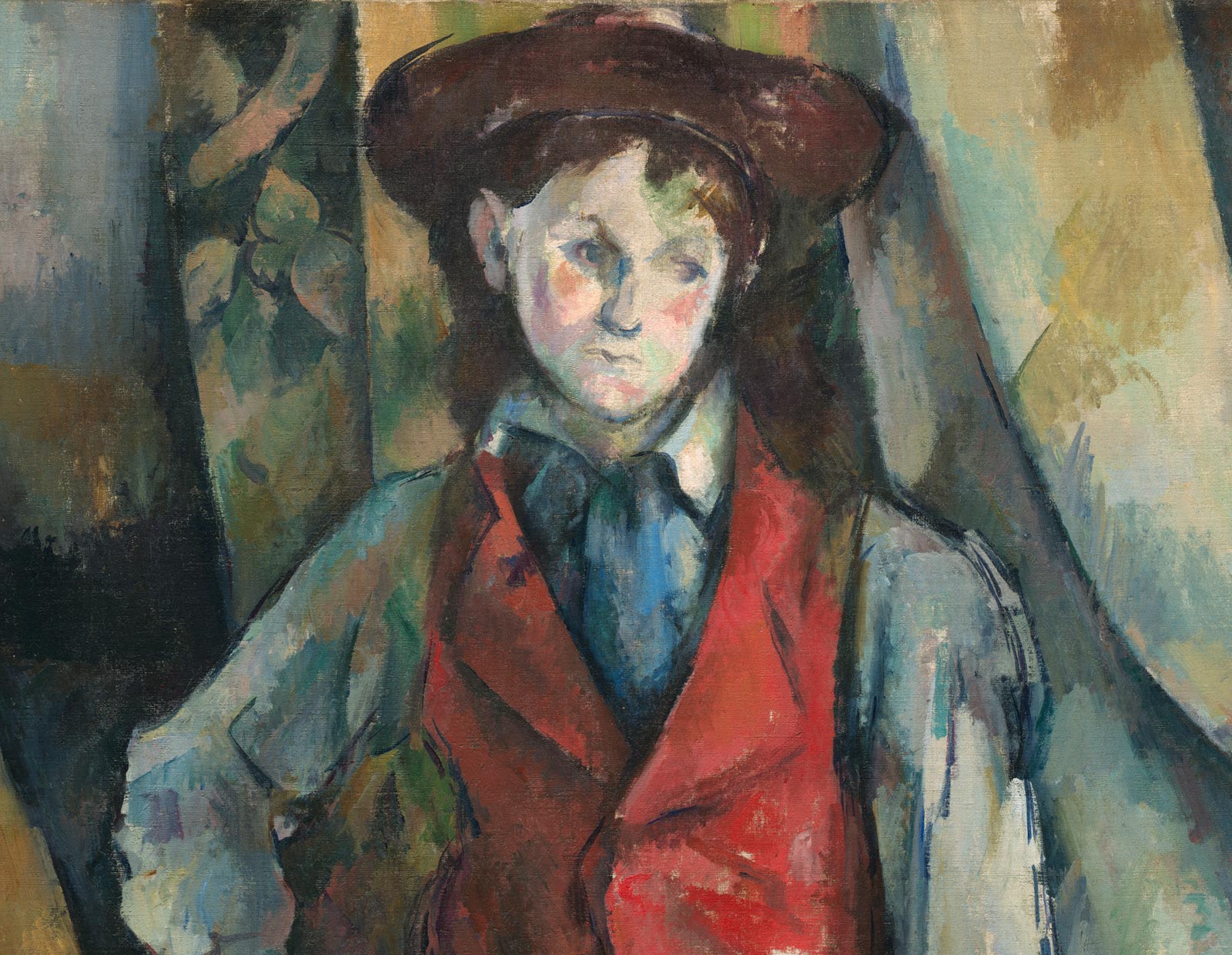 Boy in a Red Waistcoat

Cézanne’s art...lies between the old kind of picture, faithful to a striking or beautiful object, and the modern “abstract” kind of painting, a moving harmony of color touches representing nothing.

Like critic Meyer Schapiro, many 20th-century artists also saw as a sort of spiritual forbearer. Pablo Picasso called him a "mother hovering over"; Henri Matisse said he was a "father to us all." As much as it is a portrait of a wistful young man, this painting is equally, and perhaps as essentially, an arrangement of colors and shapes. We can see it as a kind of stepping-off point for modern art, one with direct links to those younger artists’ work. The greens and mauves Cézanne used in the boy’s face and hands, for example, are like the “wild” colors that won Matisse and his colleagues the title “fauve” (wild beast), arbitrary touches with little connection to human flesh. The background—it is hard even to “read” it as floral-patterned drapery—is fractured and flattened into a kaleidoscope of angles and arcs in a way that looks forward to the reconstructed spaces of the first cubist experiments by and .

Yet it would be a mistake to view this painting only in terms of what comes next.  also reflects Cézanne's admiration for and connection to the past. He said himself that he "wanted to make of impressionism something solid and durable, like the art of the museums." He spent many hours teaching himself to be a painter by studying old masters in the Louvre. This boy’s pose, with hand resting on cocked hip, and the air of languid elegance that envelops his slender form are reminiscent of 16th-century portraits by mannerist artists.

Cézanne’s orchestrations of pattern and color, despite their astonishingly modern look, did not originate as an exercise in form and abstraction. Instead, they grew out of the artist’s response to his subject. He was, he said, seeking to realize a "harmony parallel to nature." Throughout his life Cézanne stressed that he painted from nature and according to his sensations. It was through color relationships that he made visible the fundamental character and connectedness of what he saw and felt. In the boy’s face and shirt the tones are mostly cool and remarkably varied—pinks, greens, lavenders, blues, purples—a contrast to the reds of his vest. Elsewhere color is more subdued. Autumnal tones in the background, some warmer, some cooler, all lower keyed, function like a moody bass line, tempering the more brilliant accents that play out over them.

The boy, a professional model named Michelangelo di Rosa, is garbed in the romantic costume of an Italian peasant, with floppy tie to match his striking vest. The round-brimmed hat, positioned high on his head gives him a certain naiveté, and the mussed bangs make him seem young, even vulnerable. He appears pale and pensive, his small mouth formed faintly, in Shapiro’s words, like the wings of a distant bird. Cézanne painted di Rosa several times while he was in Paris between 1888 and 1900. He must have found the young Italian an appealing subject, since he usually posed family members and friends.

Cézanne was born in Aix-en-Provence, where his father, originally a hat maker, had become part owner of a bank. Cézanne received a strong classical education and shared his adolescence with Émile Zola, future novelist and critic. At his father’s insistence, Cézanne studied law but was increasingly drawn to art. In 1861 he went to Paris.

Online Feature
A Selection of Portraits from Cézanne’s Sketchbook

Cézanne’s early works were dark and heavy. He applied pigments with emphatic brushstrokes or a palette knife, and his subjects were “difficult,” sometimes violent and erotic, deeply personal. In the early 1870s, under the influence of the impressionists, Cézanne’s style changed. Working alongside his mentor Camille Pissarro, he turned to landscapes and adopted the impressionists' broken brushwork and brighter colors. He exhibited with them in 1874 and 1877 (his submissions provoking some of the most stinging ridicule). Cézanne’s paintings did not sell; in fact, they were seen by few except fellow painters. As he grew disillusioned, he divided his time between Provence and the capital. After his father’s death in 1886, Cézanne moved permanently to Provence (though he kept a studio in Paris and made extensive visits there).