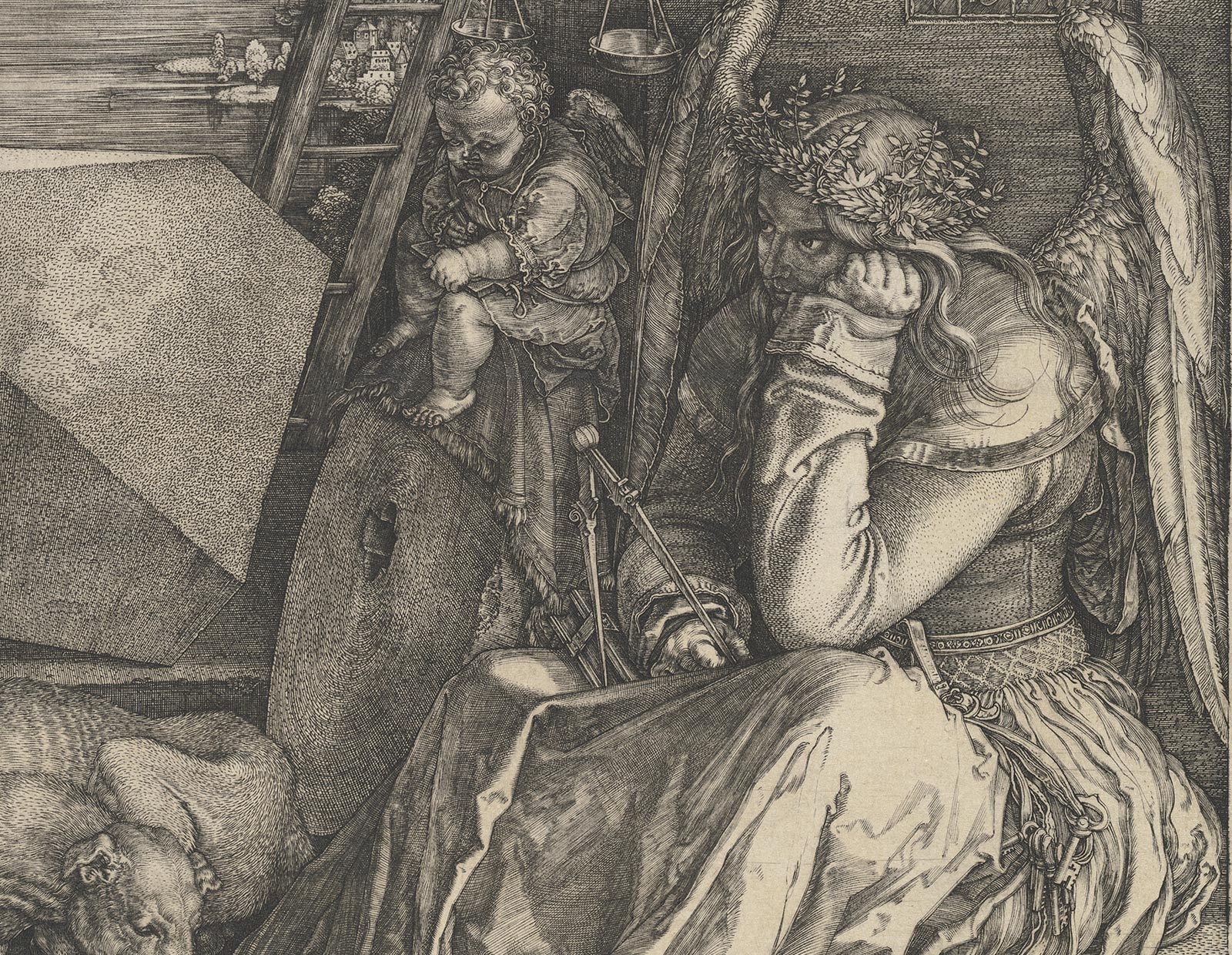 The lie is in our understanding, and darkness is so firmly entrenched in our mind that even our groping will fail.

enigmatic has inspired and provoked viewers for nearly half a millennium. The evident subject of the engraving, as written upon the scroll unfurled by a flying batlike creature, is melencolia—melancholy. But what Dürer intended by the term, and how the print’s mysterious figures and perplexing objects contribute to its meaning, continue to be debated. Simultaneously inviting and resisting interpretation, Melencolia I is a testament to Dürer’s extraordinary intellectual ambition and artistic imagination.

A winged figure sits, brooding, her face in shadow but her eyes alert. She rests her head on her left hand and toys with a caliper (resembling a compass) in her right. A putto seated on a millstone writes on a tablet while below, an emaciated dog sleeps between a sphere and a truncated polyhedron. Carpentry tools are scattered on the ground. A ladder leans against a building that supports a balance, an hour glass, and a bell. A magic square is inscribed on one wall; the digits in each row, column, and diagonal add up to 34. In the background, a blazing star or comet illuminates a seascape surmounted by a rainbow.

One of Dürer’s three “master engravings,” Melencolia I has been linked by scholars to alchemy, astrology, theology, and philosophy, among other themes. Perhaps the most prevalent analysis suggests the engraving represents the melancholy of the creative artist, and that it is a spiritual self-portrait of Dürer himself. From ancient Greek times through the Middle Ages, melancholy was considered the least desirable of the four humors that were believed to govern human temperament. Alleged to suffer from an excess of black bile, melancholics were thought to be especially prone to insanity. Renaissance thought, however, revamped the status of the dreaded humor by connecting it to creative genius as well as madness.

Dürer’s take on artists’ melancholy may have been influenced by Heinrich Cornelius Agrippa’s De Occulta Philosophia, a tract popular in Renaissance humanist circles. Agrippa classified melancholic inspiration into three ascending levels: imagination, reason, and intellect. He linked imagination (the first and lowest level) to artistic genius; this may account for the numeral “1” in the title and provide a key for explaining the frustration of the winged figure-cum-artist.

The objects she has at hand are associated with geometry and measurement, fields of knowledge that were considered the building blocks of artistic creation and that Dürer studied doggedly in his quest to theorize absolute beauty. Yet struggle as she might intellectually, she is powerless to transcend the earthbound realm of imagination to attain the higher stages of abstract thought (an idea to which the ladder that extends beyond the image may allude). She is winged but cannot fly. Despairing of the limits of human knowledge, she is paralyzed and unable to create, as the discarded and unused tools suggest. Ironically, this anguished representation of artistic impotence has proved a shining and enduring example of the power of Dürer’s art.

In 1513–1514 Dürer produced three exceptional copper engravings—Knight, Death and Devil, Saint Jerome in His Study, and Melencolia I—that have come to be known collectively as the Meisterstiche, or Master Engravings. Some scholars have interpreted the master engravings as complementary examples of different virtues—moral (the Knight), theological (Saint Jerome), and intellectual (Melencolia). Saint Jerome and Melencolia may be informal pendants; Saint Jerome’s clarity, light, and order contrast markedly with Melencolia’s brooding angst, nocturnal setting, and disorderly arrangement. Though it is not certain that Dürer conceived of the three prints as a set, they are similar in style, size, and complexity, and represent the pinnacle of Dürer’s practice as an engraver. Unlike many of his other prints, these engravings, large by Dürer’s standards, were intended more for connoisseurs and collectors than for popular devotion. Their technical virtuosity, intellectual scope, and psychological depth were unmatched by earlier printed work. Albrecht Dürer (1471–1528), one of the greatest of all German artists, was a painter, printmaker, draftsman, and theoretician. He is largely credited with bringing the Italian Renaissance to northern Europe, and he revolutionized printmaking, elevating it to an independent art form.

Born in Nuremberg, Dürer apprenticed first with his father, a goldsmith, and then with Michael Wolgemut, the leading painter and woodcut artist in the city. He worked in Basel and Strasbourg as a journeyman before visiting Venice in 1494–1495, where he became one of the first northern European artists to study the Italian Renaissance in situ. The exceptional drawing An Oriental Ruler Seated on His Throne is one result of this youthful journey.

Dürer settled in Nuremberg for the next decade, a period of explosive productivity. He executed several commissions for paintings and began to print and publish his own woodcuts and engravings. Circulated widely, these prints established his international reputation. He also rigorously studied intellectual concepts central to the Renaissance: perspective, absolute beauty, proportion, and harmony. By the time of his second trip to Italy, 1505–1507, he was the most celebrated German artist of the period. He visited Venice, Florence, and Rome, studying the Italian masters and producing important paintings of his own. Back in Nuremberg, where he largely stayed until 1520, Dürer alternated between periods focusing on painting and graphic work. At the same time, he wrote verse, studied languages and mathematics, and started drafting a treatise on the theory of art. He eventually published books on geometry (1525), fortifications (1527), and the theory of human proportions (1528, soon after his death). In 1512 Dürer came to the attention of , who became his greatest patron. In 1513–1514 Dürer produced his three “master engravings,” including Melencolia I.

Dürer spent a year in the Netherlands (1520–1521), where he was moved by the recognition accorded him by artists and dignitaries.  Despite having recently converted to Lutheranism, he attended the coronation of the ultra-Catholic Emperor Charles V in Aachen.  The new emperor renewed the pension Dürer had been granted by Maximilian I. After his return he focused mainly on portraits and small engravings. He presented his final major work, the Four Apostles (1526), to the city of Nuremberg, which had adopted Lutheranism 18 months earlier. He died in 1528.