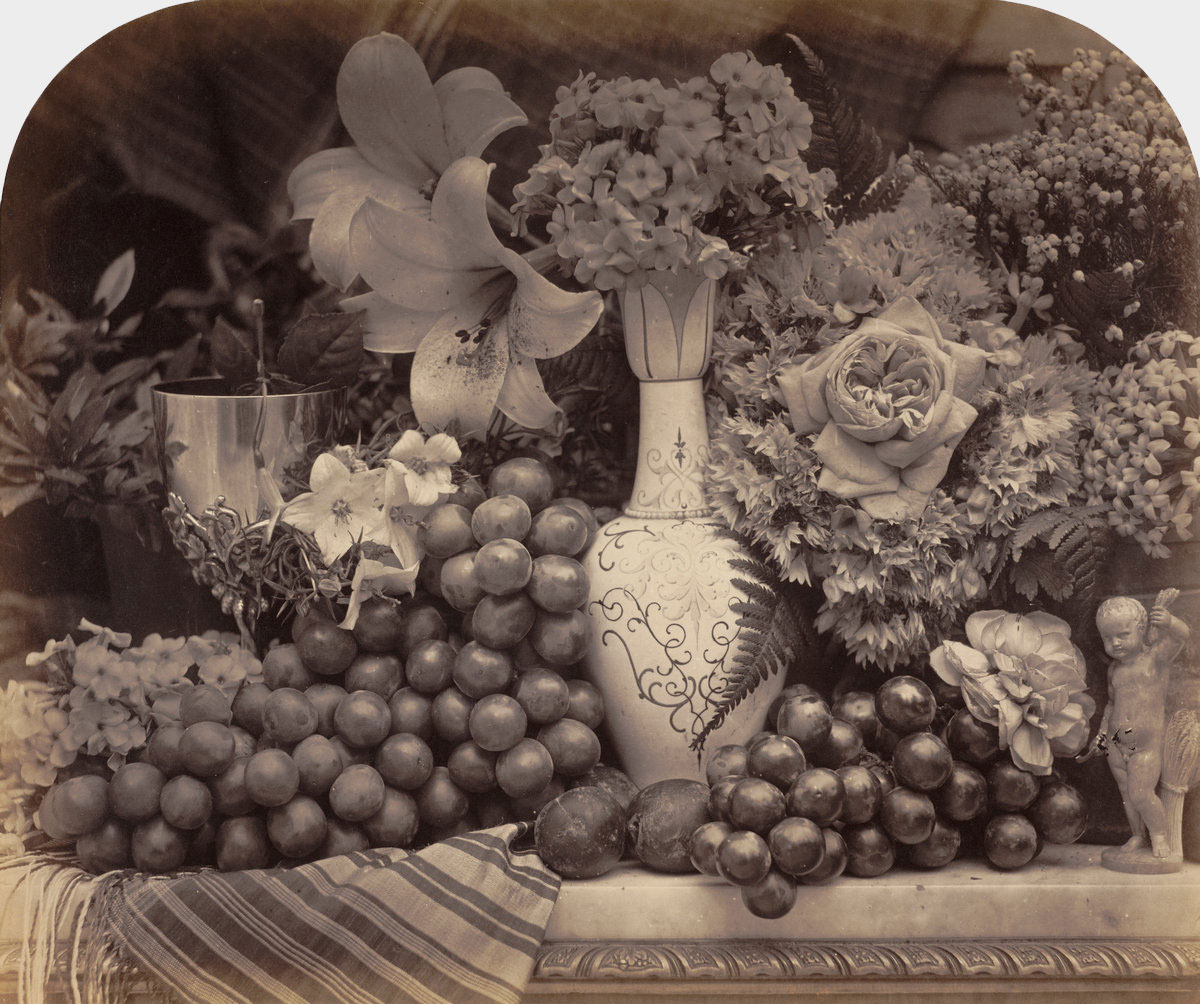 As an art, it [photography] is yet in its infancy…the uses to which it may be applied will yet be multiplied tenfold.

Roger Fenton, "On the Present Position and Future Prospects of the Art of Photography"

In tackling still lifes, gave form to his ardent belief that no subject was off limits to photography, even one intimately linked to the history of painting and seemingly so dependent on color. Faced with terrible weather in 1860 that curtailed his ability to photograph landscapes, Fenton drew upon the skills he had perfected earlier in the decade while photographing the collection of the British Museum and trained his lens on carefully balanced still-life arrangements. Cleverly massing and juxtaposing forms and tonal values, and brazenly taking advantage of photography’s ability to convey detail, Fenton quickly produced a series of unprecedented vivaciousness that convincingly demonstrated why photography should be counted as an art. is among the last images this towering figure in the history of photography made before quitting photography for good at age 41.

Fruit and Flowers is an ebullient, in-your-face celebration of summer’s bounty. Shot head on and close up, the densely packed arrangement seems ready to tumble from the large, glossy 14- by nearly 17-inch albumen print made from a collodion negative. Dozens of juicy, sensuous grapes flank a tall, centered vase decorated with a tendril pattern; the vase holds pansies at its top while plums nestle at the base. At right, a few grapes dangle over the edge of a marble tabletop, falling into the viewer’s space, as does a striped, tasseled cloth at left. Star-shaped hoyas are reflected in a chased silver goblet, and two immense lilies, their stems obscured, appear to hover untethered above. The lilies are balanced compositionally by a large rose that faces the viewer, while a second rose, near the bottom, separates the grapes and a nude figurine. Ferns and lily of the valley complete the floral medley.

The prominent roses and lilies may allude to the sacred, as both are associated with the Virgin Mary, but myriad wine references, such as the grapes, the chalice decorated with grape vines, and especially the impish figurine, whose physical attributes link him to bacchanalian Roman festivals, point decidedly to the profane. At the same time, the withering rose, drooping leaves, and tired-looking plums remind the viewer that such pleasures are ephemeral.

About Collodion Negatives and Albumen Prints

Wet collodion negatives are glass plates hand-coated with a thin film of collodion (guncotton dissolved in ether and alcohol), then sensitized with silver salts. The plate was then exposed while still wet and developed immediately. Invented by Frederick Scott Archer in 1851, collodion negatives were popular throughout the 1850s and had almost entirely replaced paper negatives by 1860. Glass negatives were ideal for printing albumen prints, the most common photographic print process from the mid-1850s through the 1880s. Invented by Louis Désiré Blanquart-Evrard, albumen prints were made using paper coated with a layer of silver salts suspended in egg white and then exposed to sunlight through a negative. Albumen prints are characterized by their smooth, glossy surface and fine detail. Most albumen prints were toned with a solution containing gold chloride, which changed the image hue from reddish brown to a rich purple.

Born in 1819 to an affluent family in England, Roger Fenton was trained as a lawyer and a painter before embarking on a pathbreaking (if short-lived) photographic career. Fenton took up the new medium after seeing England’s first large display of photographs, at the Great Exhibition in London in 1851. Recognizing photography as a burgeoning field of opportunity, Fenton traveled to Paris in October 1851 to see his friend Gustave Le Gray, a leading French photographer whom Fenton most likely met when he studied painting. Le Gray taught Fenton the newly invented waxed-paper negative process. As a successful commercial photographer who was, at the same time, committed to promoting the medium as an art, Le Gray provided a model on which Fenton could base his career.

From early 1852 until early 1855, Fenton worked tirelessly to raise the stature of photography in England and to promote his own work: he published and circulated his photographs in Europe, wrote articles on photography, helped found a photographic society, and organized solo and group photography exhibitions.

In the fall of 1852, Fenton ventured to Kiev to document the construction of a suspension bridge over the Dnieper River. The photographs Fenton made in Kiev, and later in Moscow, demonstrate remarkable competence and maturity for a new photographer.

Eager to prove photography’s many applications, Fenton in 1853 became the first official photographer of the British Museum. In 1854 his work came to the attention of Queen Victoria and Prince Albert; they purchased several of his photographs and invited him to Windsor Castle to document the royal family.

Exhibition Feature
“All the Mighty World: The Photographs of Roger Fenton, 1852–1860”

The following year, after transforming a wine merchant’s van into a traveling darkroom, Fenton embarked on a mission to document the Crimean War; in three months he made more than 350 negatives of the officers, troop divisions, and terrain around Sebastopol. He was among the first to document war photographically.

Fenton became a celebrity upon his return to England, but his widely hailed Crimean images failed to sell when packaged in expensive portfolios. Over the next six years, Fenton exhibited and marketed views of landscapes, Gothic architecture, and still lifes, but he was increasingly hard-pressed to make photography a viable and respectable undertaking. With his photograph sales plummeting amid the onslaught of crude but inexpensive stereoscopic views and carte-de-visite (visiting card) portraits, Fenton abandoned photography. Plagued by personal loss and failing health, Fenton sold his negatives and equipment in 1862. He served as a barrister until his retirement in 1865.

Roger Fenton, Moscow, Domes of Churches in the Kremlin, 1852