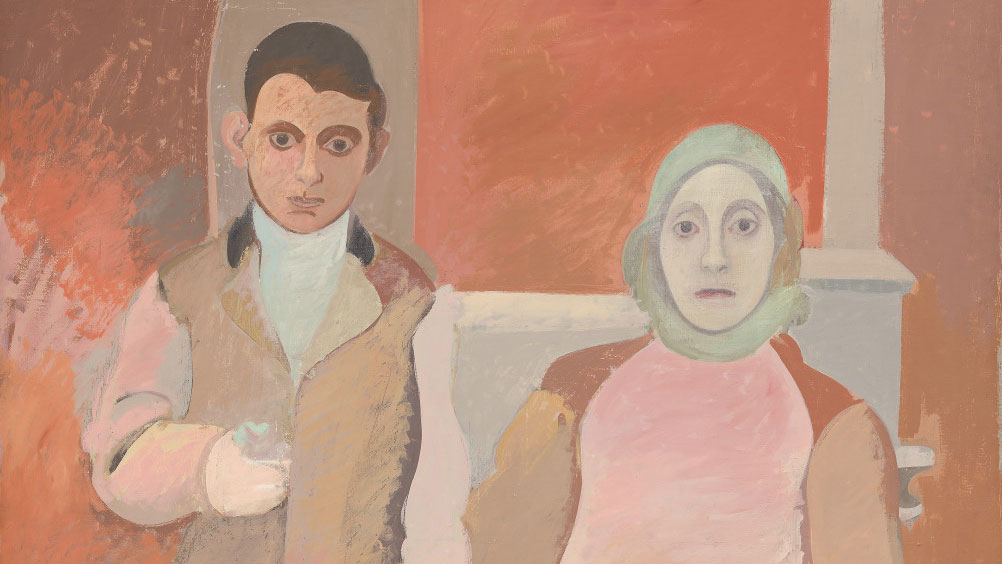 The Artist and His Mother

I don’t like that word, “finish.” When something is finished, that means it’s dead, doesn’t it? I believe in everlastingness. I never finish a painting—I just stop working on it for a while.

In March 1919, 14-year-old Vosdanig Manoog Adoian watched his mother starve to death, one of countless victims of the Ottoman Turkish effort to displace or exterminate the empire’s Armenian population, an effort that the United States has recognized and condemned as genocide. Years later, after migrating to the United States and adopting the name , the boy-turned-artist came across a photograph of himself and his mother taken in 1912, when he was eight. The photograph become the touchstone for , which would preoccupy Gorky on and off from 1926 until about 1942. Both an exploration of modern painting and an emotional evocation of personal and national tragedy, it is one of the most powerful portraits of the 20th century.

Like the black-and-white studio photograph on which it was based, the portrait depicts a young Gorky standing next to his seated mother. He wears a long formal coat with a collar and stiffly holds a spray of small flowers in his right hand. She wears a pinafore over a blouse or sweater, a scarf wraps her head, and her hands rest on her thighs. The palette is dominated by warm rose and terracotta. The loose, dry brushwork and the structuring of the composition through broad areas of color rather than lines dematerialize the figures and lend the painting an ethereal quality.

Years after campaigns against minority Armenians in Turkey caused his family to disperse and his mother to die before his eyes, Gorky found a 1912 photograph taken in the city of Van upon which he based drawn and painted portraits of The Artist and His Mother. The video Ararat (Excerpts) investigates the fraught history of Gorky's lost childhood through his protracted work on the image of himself at age 12, standing beside his mother, Shushan. Derived from the feature-length film Ararat written and directed by Academy Award®-nominated director Atom Egoyan.

Despite their proximity and shared coloring—the pink of the mother’s jumper is echoed in the boy’s sleeves, and the ochre of his coat is repeated on her upper arms—the figures appear disconnected. The boy stands somewhat behind his mother, almost dissolving into the background, his feet turned slightly away from her. She slumps a little to the side, away from him. Their arms seem to touch despite their different positions in space. The figures’ undefined hands suggest the impossibility of their making contact.

The features of both are greatly simplified and masklike, but while the boy’s face—with its dark flesh tones, evident brushwork, and deep-set eyes—situates him in the land of the living, the mother’s face is bloodless. Her chalky complexion and expressionless gaze, framed by the halo-like headscarf, suggest that she inhabits an idealized, eternal realm. Gorky heightened this feeling by scraping and polishing the layers of paint in the area of her face until they acquired an ivory smoothness.

Though rendered with semiabstract shapes that indelibly mark it as modern, The Artist and His Mother draws on visual precedents from Armenian, Egyptian, and medieval memorial portraiture as well as from portraits by Jean-Auguste-Dominique Ingres and Paul Cézanne. As a synthesis of contemporary and ancient artistic vocabulary that conjures up both past and present, the painting is an achingly beautiful and transcendent memorial to the woman Gorky credited with having first exposed him to art.

Arshile Gorky (c. 1904–1948) was born Vosdanig Adoian in the Armenian province of Van on the eastern border of Ottoman Turkey. His father fled to the United States in 1908 to avoid conscription, but the family stayed behind and suffered amid the increasing Ottoman Turkish persecution of Armenians. In the face of hardship, Gorky’s mother encouraged the budding artist by introducing him to Armenian art and architecture. In 1915 the family endured a harrowing 100-mile forced march, and in 1919 Gorky’s mother, suffering from malnutrition, died in her son’s arms. The next year Gorky and his younger sister managed to escape to the United States.

After living with relatives in New England (including briefly with his father, where he found the photograph that would later become the basis for The Artist and His Mother), Gorky settled in New York City in 1924. Intent on reinventing himself, he adopted the name Arshile Gorky in honor of the Russian writer Maxim Gorky (to whom he sometimes claimed—falsely—to be related). He enrolled at the National Academy of Design and the Grand Central School of Art, where he became an instructor. He counted among his New York friends the artists Stuart Davis and Willem de Kooning.

Though he had some formal art training, Gorky was largely self-taught. He haunted museums and galleries and devoured art books and magazines. He systematically studied and engaged with the work of Paul Cézanne, Pablo Picasso, and Joan Miró, among others, and his style developed over the years from cubism, to post-impressionism, to surrealism. By the early 1940s Gorky had gained recognition as one of the most prominent abstract artists among the New York avant-garde.

A masterful colorist, Gorky was also a consummate draftsman. A powerful drawing of his mother with sensuously full lips and an alert expression contrasts markedly with her depiction in The Artist and His Mother. A squared-off drawing closely related to the painted portrait demonstrates Gorky’s deliberateness and respect for traditional artistic technique.

Gorky’s life ended as tragically as it had begun. A devastating studio fire in 1946 that destroyed more than 20 paintings and scores of drawings was quickly followed by a painful operation for cancer, a debilitating car accident, and the disintegration of his marriage. He hanged himself in 1948.

Related works in the
National Gallery of Art Collection