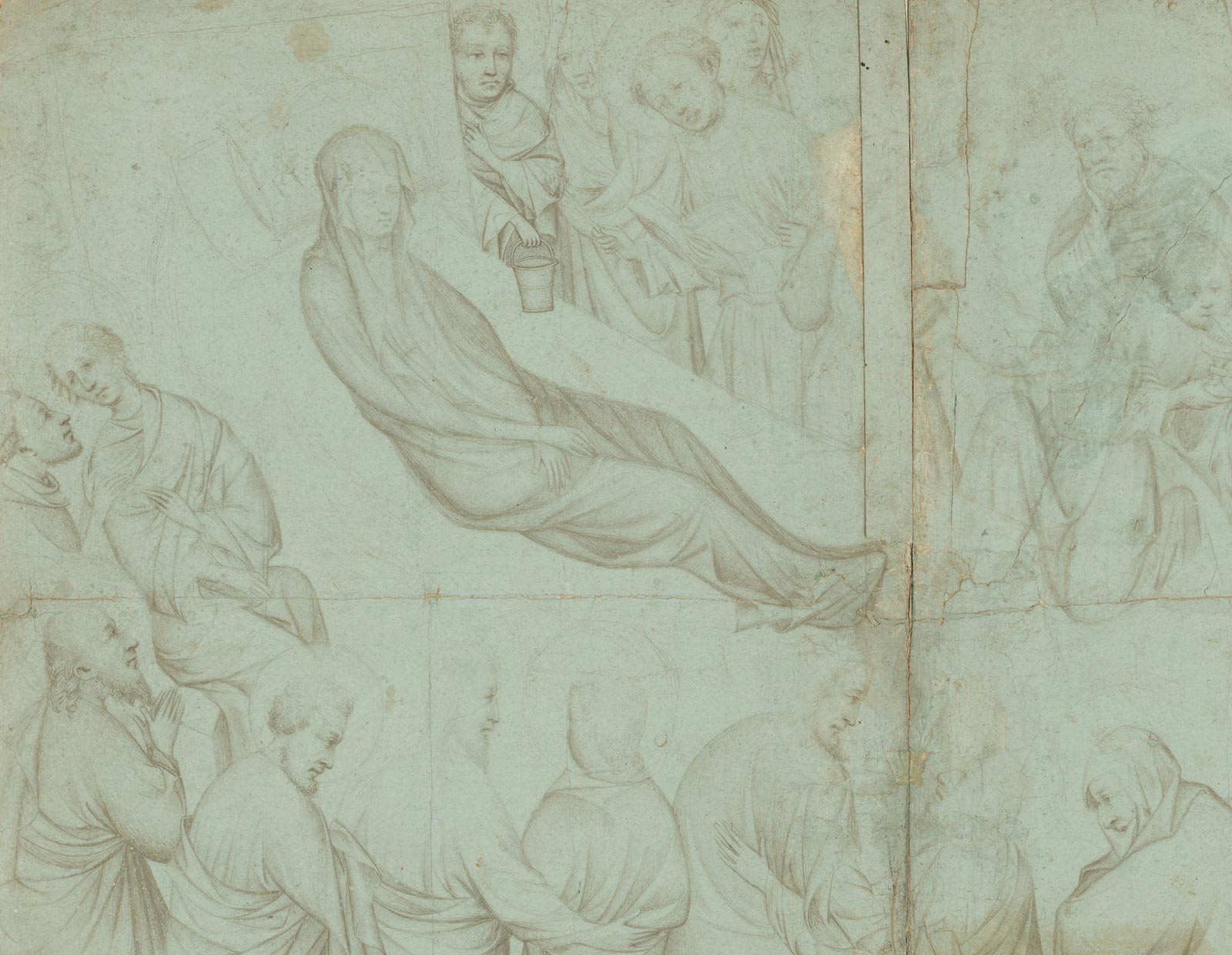 The Death of the Virgin

And then said John: O would God that all my brethren the apostles were here.... And as he said that, all the apostles were ravished with clouds from the places where they preached, and were brought before the door of the blessed Virgin Mary.

In this delicate silverpoint drawing, apostles and other mourners gather around the Virgin Mary during her last hours on earth. Although the Bible is silent about her death, early church fathers in the East had recounted the miraculous events preceding Mary’s assumption into heaven, and by the late 13th century it was among the most frequently depicted episodes from the life of the Virgin in the West. When this drawing was made, most artists in northern Europe based their depictions on the Golden Legend, a popular 13th-century compilation of biblical legend and saints’ lives by Jacobus da Voraigne. According to his account, Mary was visited by an angel bearing a palm. He told her that in three days’ time she would be reunited with her son in heaven. As the Virgin slept, clouds were dispatched to convey the apostles to her bedside, first John (who was in Ephesus, near Mary’s house), then the others from the various places across the world where they preached. Only Thomas, who remained unconvinced about her death, was absent.

During the late Middle Ages the subject of the Death of the Virgin was connected with the “art of dying well,” an important preoccupation of contemporary devotion, particularly in the northern Europe. Mary’s was the model of a perfect Christian death: free of sin, pain, and fear. In this drawing, the Virgin lies in peaceful stillness, but mourners cannot disguise their grief [show details]. Apostles perform the final rites, anointing her from a bucket-shaped vessel (aspersorium) and administering final communion (the viaticum). Wrapped in her cloak, the Virgin appears to be shrouded but also swaddled, as if she were an infant, and in many depictions, Christ appears in heaven or at her bedside holding her pure soul in the form of a baby. Mary’s appearance here is not unlike that seen in Byzantine icons—early versions of the Death of the Virgin in the West generally followed Byzantine models [illus 1]—but the varied and contemplative expressions of the mourners suggest a different approach to the subject, one that intensified viewers’ personal connection to the scene. Later depictions of the Death of the Virgin are often set in a domestic interior that would have made the sacred event even more directly a part of the familiar experience of contemporary men and women [see an example, illus 2].

Silverpoint
Silverpoint was a technique in common use from the late 14th century. The artist used a stylus with a silver point to sketch onto specially prepared paper. The green ground on which this drawing was made is a mixture of bone white, colored pigments, and a glue binder. It provided a slightly rough surface that “caught” particles of silver from the stylus as the artist drew and gave the paper “tooth” to hold them.

Two figures in this drawing—the supine Virgin and the mourner with hand to her mouth—resemble figures found in the Belles Heures [illus 3 and 4, showing paired details from the drawing], a sumptuous illuminated manuscript made by the Limbourg brothers (Harman, Paul, and Jean) for Jean, Duc de Berry. The duke, who was a son, brother, and uncle of French kings, was an important collector of art and owned an impressive library. At this time illuminated books were more highly prized than paintings on panel. The Limbourg brothers, who entered the duke’s service as teenagers and remained in his employ until the duke’s death in 1416, were among the greatest exponents of late Gothic courtly art. It may well be that the Gallery’s drawing is the work of an artist within the same circle.

Few drawings survive from the later 14th century. In fact, this one is among the oldest works on paper at the National Gallery. They were sometimes compiled in workshop copy books. Perhaps the repaired vertical tear on this sheet can be explained by its having been included in such a volume. For its age, however, the drawing is in good condition.