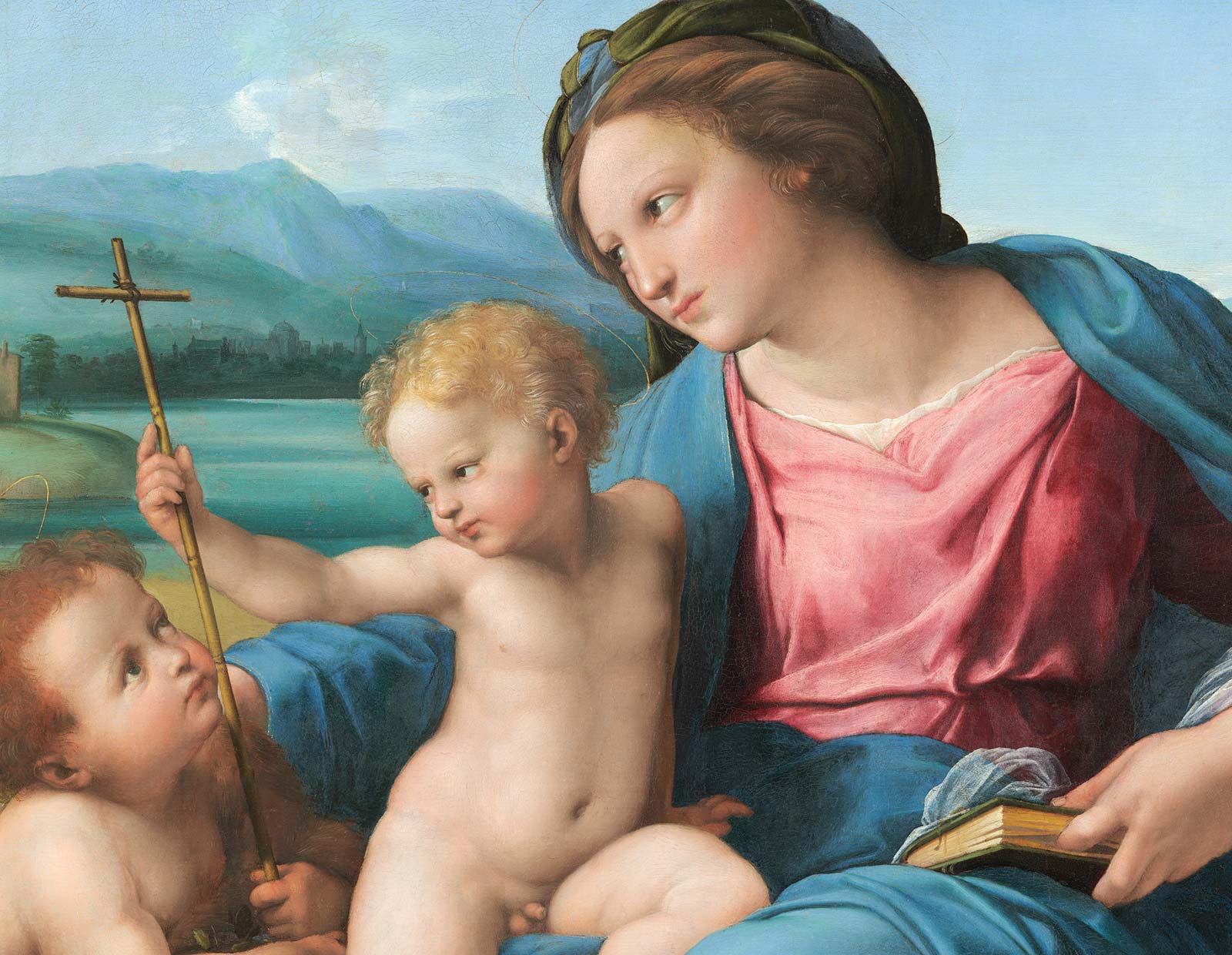 Mary, Jesus, and John the Baptist are linked—by gaze, pose, and understanding—as they contemplate the cross Jesus takes in his hand. With calm gravity they apprehend the gesture’s significance: in this moment all see and accept Christ’s future sacrifice. But the limitlessness of the circular panel, its clear colors, and the Virgin’s radiant beauty hold out the promise of Grace.

Seamless integration of form and meaning is a hallmark of the High Renaissance, a brief moment when a timeless, classical style balanced the perceptual and the conceptual attractions of art.  reached this point of perfect counterpoise after assimilating lessons from Leonardo, Michelangelo, and the art of ancient Rome—all of which we see reflected in .

The natural relation of the figures to each other and their landscape setting, and the way these relationships are integral to the “story” being told, were innovations Raphael drew from Leonardo. The three figures define a broad pyramid to convey strength and stability. But notice the extent to which their bodies and poses respond to the circular form: the bend of the Virgin’s leg and elbow, her soft face and domed turban, her arm encircling Saint John, his fur garment that sweeps around him to complete the curve. The circle of the tondo, an ideal and infinite shape, evokes the heavens, the idea of divine perfection, and the hope for salvation granted through Christ’s sacrifice. Even the plants contribute to this meaning.

In Rome, where The Alba Madonna was painted, Raphael had been able to view work in progress on Michelangelo’s Sistine Chapel frescoes. We see the same robustness and large scale in Raphael’s figures. Compare the physical presence of the The Alba Madonna with pictures of the Virgin and Child Raphael painted in Florence only a few years earlier.

Madonna and child images
in the National Gallery of Art collection

Here monumentality lends seriousness of purpose—gravitas further underscored by Raphael’s evocation of ancient art. The Madonna’s complex pose recalls classical sculpture, and her dress is that of a Roman matron. Even her sandal is based on those worn by a celebrated ancient sculpture in the papal collection.

Such a mélange of diverse influences might, in the hands of a lesser artist, produce a work that is formulaic or lifeless, but The Alba Madonna is warmed by compassion and incandescent beauty. Its meaning is made human with an easy grace. No wonder subsequent generations found Raphael’s art an ideal of harmony and perfection. Raffaelo di Giovanni Santi was the younger contemporary of Leonardo and Michelangelo, and with them epitomizes the High Renaissance in Italy. For most of the history of Western art, the easy grace and harmonious balance of Raphael’s style has represented an ideal of perfection. A man noted also for wit and charm, he has often been called the “prince of painters.”

Raphael must have studied first with his father, painter at the court of Urbino, an environment rich in the arts and humanist learning. The elder Santi died when the boy was 11. Whether Raphael entered the workshop of Perugino at that time or, as seems more likely, many years later when he was already an acknowledged artist, he quickly mastered Perugino’s delicate, ornamental style, with its open landscapes and gentle figures. It was said that contemporaries had trouble distinguishing Perugino’s work from Raphael’s, but Raphael’s compositions were more sophisticated even when he was a young artist.

Late in 1504, Raphael moved to Florence, drawn there by accounts of Leonardo’s work there. Leonardo’s softly shadowed forms, natural figure groupings, and simplified settings were all stunningly new—and Raphael responded quickly to them. In 1508 the pope called Raphael to Rome. Influenced by the idealized, classical art of the city's ancient past, Raphael’s work took on a new grandeur. He also responded to the more the energetic and physical style of Michelangelo, whose works he had already begun to study in Florence.

Raphael remained in Rome for the last 12 years of his life. In those years he was extremely active, preparing monumental frescoes for the papal chambers, designing tapestries for the Sistine Chapel, and painting scenes that captured mythological stories with delight and exuberance. His work became widely influential through the dissemination of prints. Raphael was also the city’s leading portraitist, creating penetrating psychological images that engaged viewer and sitter with a new intensity. When he died at age 37, the pope ordered that Raphael, who had been keeper of antiquities, be buried in the Pantheon.