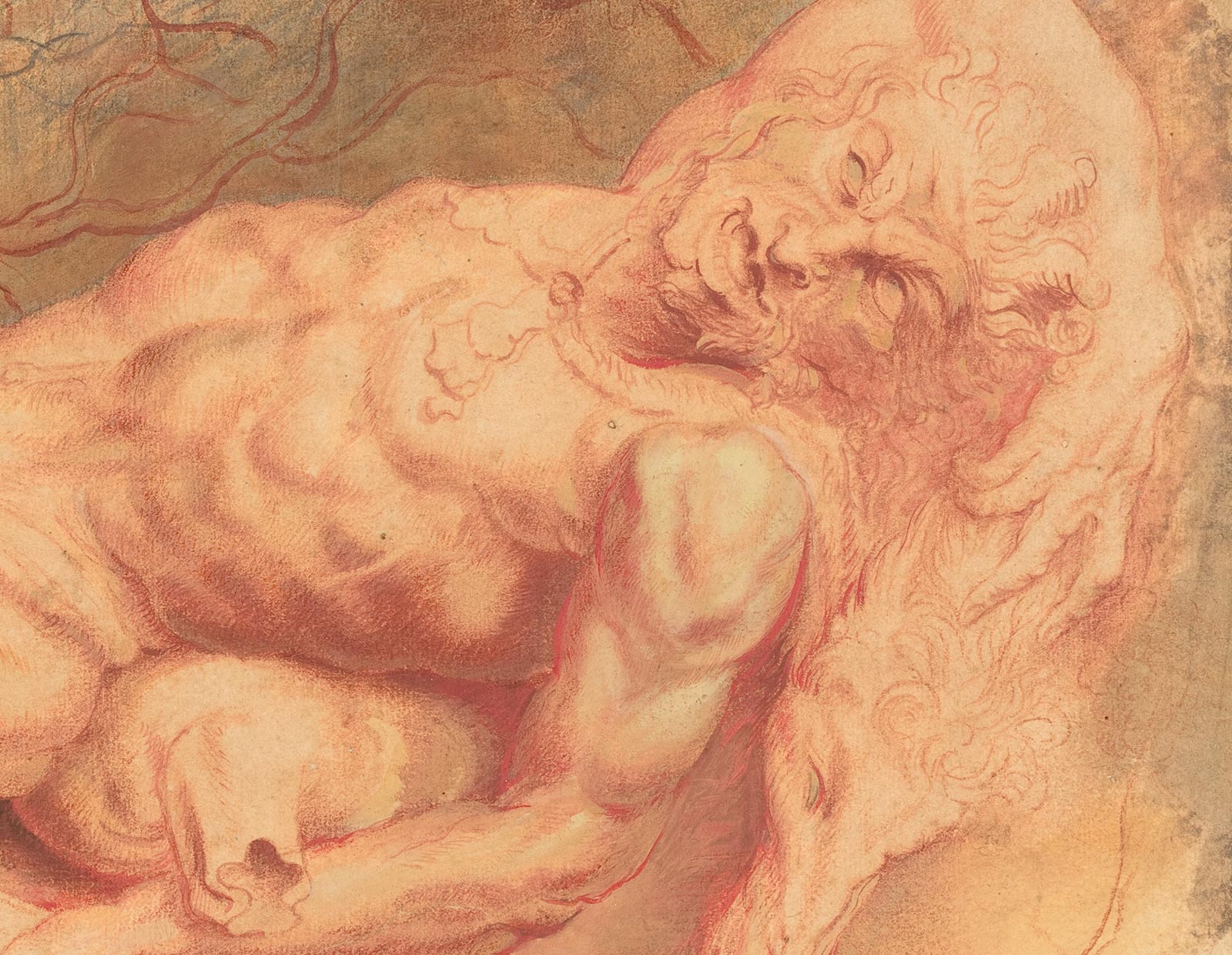 An artist must breathe life into those ancient works he depicts in his art, and if necessary ‘adjust’ the source to achieve the desired image.

A resident of Antwerp for most of his life, lived in Italy from 1600 to 1608. Like many northern European artists, he traveled south as a young man to study and gain inspiration from the sculpture and architecture of ancient Greece and Rome, as well as the paintings and sculptures of the Renaissance. In so doing, he was participating in a long tradition of imitating and learning from ancient and recent masters.

Among the works he studied and drew while in Rome was a widely admired marble sculpture, Reclining Pan. At the time Rubens first saw it, in the early 1600s, the work was mistakenly considered a Greek antiquity because of the genuinely antique marble from which it is carved and its subject—Pan is the half-goat, half-human god of Greek mythology. The sculpture’s high regard lured Rubens and a number of his fellow artists who drew it, made prints from it, and created sculptural replicas in homage to it. While the Renaissance represented a renewal of interest in the classical world, by the 17th century, artists were well versed in classical themes and literature and adapted them anew. Classical themes were considered, alongside religious ones, the weightiest and most important subjects an artist could aspire to represent.

Today, the Reclining Pan sculpture is recognized as a fine work of art, but of the Renaissance period. The artists to whom it is attributed today—Francesco da Sangallo (1494–1576) and Giovanni Montorsoli (1507–1563)—were two Florentine sculptor-architects who worked in Michelangelo’s studio and received commissions from the pope and the Medici family. Since the far side of the sculpture was left flat and unworked, it was probably originally created for a fountain installed into a grotto wall—water would have poured from the mouth of the wine bladder under Pan. Such figures associated with the wine god Bacchus were popular as garden statuary during the Renaissance. By the 17th century, the Reclining Pan had become the property of the patrician art collector Maffeo Barberini (elected cardinal by 1606 and Pope Urban VIII in 1623) in Rome, who may have recreated its fountain configuration at the Barberini palace. Montorsoli and Sangallo themselves undoubtedly viewed ancient Hellenistic statuary of mythological figures during their time in Rome and would have known Michelangelo’s treatment of the same subjects.

Rubens’ drawings—today prized expressions of the artist’s hand—were never intended for public display or sale. Rubens considered his drawing collection functional studio property, which he carefully stored and preserved for its instructional value for his many students and apprentices, and also as a store of imagery for future use in complex, multifigure paintings. Only occasionally did he give drawings away to members of his inner circle.

Rubens often favored the medium of red chalk—here augmented by black chalk, a red wash, and gouache paint—for drawings from sculpture, the red imparting a lifelike tone to the flesh. It was Rubens’ credo that the aim of drawing from sculpture should not be to produce a drawing of the inanimate object, but to reinterpret it expressively, giving it a sense of life and movement. Antique figural sculpture represented, in Rubens’ opinion, the highest artistic achievement and a model of the ideal athletic physique worthy of emulation. Rubens found the men of his own age ill-suited as models, “weak and paunch-bellied” from drinking and lack of exercise. Drawing and copying from antiquity, especially when Rubens lived in Italy, were also part of a systematic approach to learning, refining, and defining his own artistic style that was also embedded in the literature of antiquity.

Rubens’ , freed in the drawing from his weighty marble base, becomes more animated. The god’s supine pose only slightly tempers his bestial and somewhat menacing presence. Sprawled amid grapevines on the edge of shady glade, he reclines upon a goatskin, whose head might have been cast off from his own goat-humanoid body. The empty wine bladder under him may explain his torpor. As he clutches at his pipes, his other arm flung lazily behind his head, mouth slack on his craggy face, hoofed foot resting in the notch of a shrub, the satyr’s muscled body remains taut and tense as if the slightest disturbance will cause him to wake and spring to life.

Pan is the god of shepherds, his rustic appearance and animal ways at home in the Greek fields and hills known as Arcadia, his legendary habitat. Roaming free and at one with nature, he embodies abandon, indulgence, and lust. Among the lore associated with him is the story of his pipes or syrinx, named for the nymph he lustily pursued. One day, attempting to elude his advances, she fled in fear until she met a river, and begged its deities to rescue her. They transformed her into reeds and Pan’s sigh, upon finding himself foiled, rustled through the reeds with the wind, and produced a “clear, plaintive” sound. Charmed by it, Pan fashioned the reeds into his famous pan pipes, the syrinx, whose music he then used to seduce maenads and other female inhabitants of his pastoral realm.

Rubens’ image of Pan is in reverse to the sculpture, suggesting that it is a counterproof. A counterproof is a monotype, or unique print, made from a chalk drawing. It is created by laying a damp sheet of paper over a finished chalk drawing and then passing the two sheets together through a printing press. The dusty, top layer of chalk from the original drawing is transferred to the dampened sheet, and the image is reversed in the process. Rubens significantly reworked the counterproofed image with other drawing media. The original drawing by Rubens is now lost.

Rubens was among the most prolific, learned, and versatile painters of his day. His education and urbane manners took him far in life, well beyond the expectations of even the most talented artist.

Rubens was born in Westphalia, Germany. His father Jan, a Calvinist, had moved his family there from their native Antwerp, a Catholic stronghold. Jan died when Rubens was nine and his mother, Maria Pipelinckx, moved the family back to Antwerp, where they converted to Catholicism. In Antwerp, Rubens received the finest classical, humanist education available and became deeply versed in the literature of antiquity. As a teenager, he was sent to the court at Brussels, where he was schooled in social graces and the ways of the aristocracy. Rubens knew Dutch, German, French, and read Latin (later learning English and Italian). He took up drawing, initially copying the works of famous artists, a practice he was to continue as he pursued his artistic training. As his talent became evident, Rubens began formal training as an apprentice in several painters’ studios. From the outset of his career, he favored sweeping biblical scenes, mythological dramas, and portraits. So devoted was he to his classically inspired subjects that he became known as the “Antwerp Apelles,” after a celebrated ancient Greek painter who had worked in the court of Alexander the Great and had been esteemed for both his realism and poetic sensibility.

Rubens concluded his art education in Italy, where he remained from 1600 to 1608. He studied Renaissance painters in Venice and also lived in Mantua, Rome, and Genoa. He accepted commissions and also spent time studying and copying from classical sculpture as well as Renaissance masters such as Michelangelo, Titian, and Mantegna, as well as contemporaries such as Caravaggio. With letters of introduction to the Italian nobility, he was able to secure important commissions, including portraits (Marchesa Brigida Spinola Doria, painted in Genoa) and works for private chapels and churches. He left Italy to attend to his dying mother in Antwerp, and possibly because of a falling out with one of his patrons.

Back in northern Europe, Rubens found himself well situated as a Catholic painter in Counter-Reformation southern Netherlands during a period of relative peace known as the Twelve-Years’ Truce (1609–1621). This hiatus from the religious strife sweeping northern Europe helped stimulate culture and prosperity. Rubens became court painter to Archduke Albert and Archduchess Isabella. He established a large and productive studio in Antwerp, undertaking numerous commissions to adorn churches, whose artworks had been destroyed during the Protestant iconoclasm. His patrons allowed him to accept commissions from foreign courts, including that of Queen Maria de’ Medici of France, as well as nobles in Spain, Germany, and England. He married Isabella Brant in 1609 and bought a house in 1610 that he transformed into an Italianate palace, which he declared to be a “temple of art” (and can be visited today as a museum).

Rubens trained other painters, among them, Anthony van Dyck, a Flemish compatriot who painted a portrait of Rubens’ wife, Isabella Brant. In addition to painting, Rubens designed tapestries and employed printmakers in his studio to make reproductions of his paintings. His international travel and high connections made him an ideal diplomatic negotiator and emissary. For these activities and for his artistic achievements, he was knighted by King Charles I. Several years after the death of his beloved Isabella Brant in 1626, Rubens married Hélène Fourment, the 15-year-old daughter of an Antwerp tapestry merchant, with whom he fathered four children in addition to the three he had had with Brant (two of whom survived to adulthood). Fourment and Rubens eventually retired from public life to a country estate, where he painted a number of landscapes. Rubens died in 1640 and is interred in the Church of Saint Jacques in Antwerp. In his will, he stipulated that his drawings were to be become the property of any male heir who became a practicing artist. Since none did, the cache of drawings was sold when his youngest child turned 18, in 1657.

More Works by Rubens in the Collection

Sir Peter Paul Rubens and Studio, Head of One of the Three Kings: Melchior, The Assyrian King, c. 1618