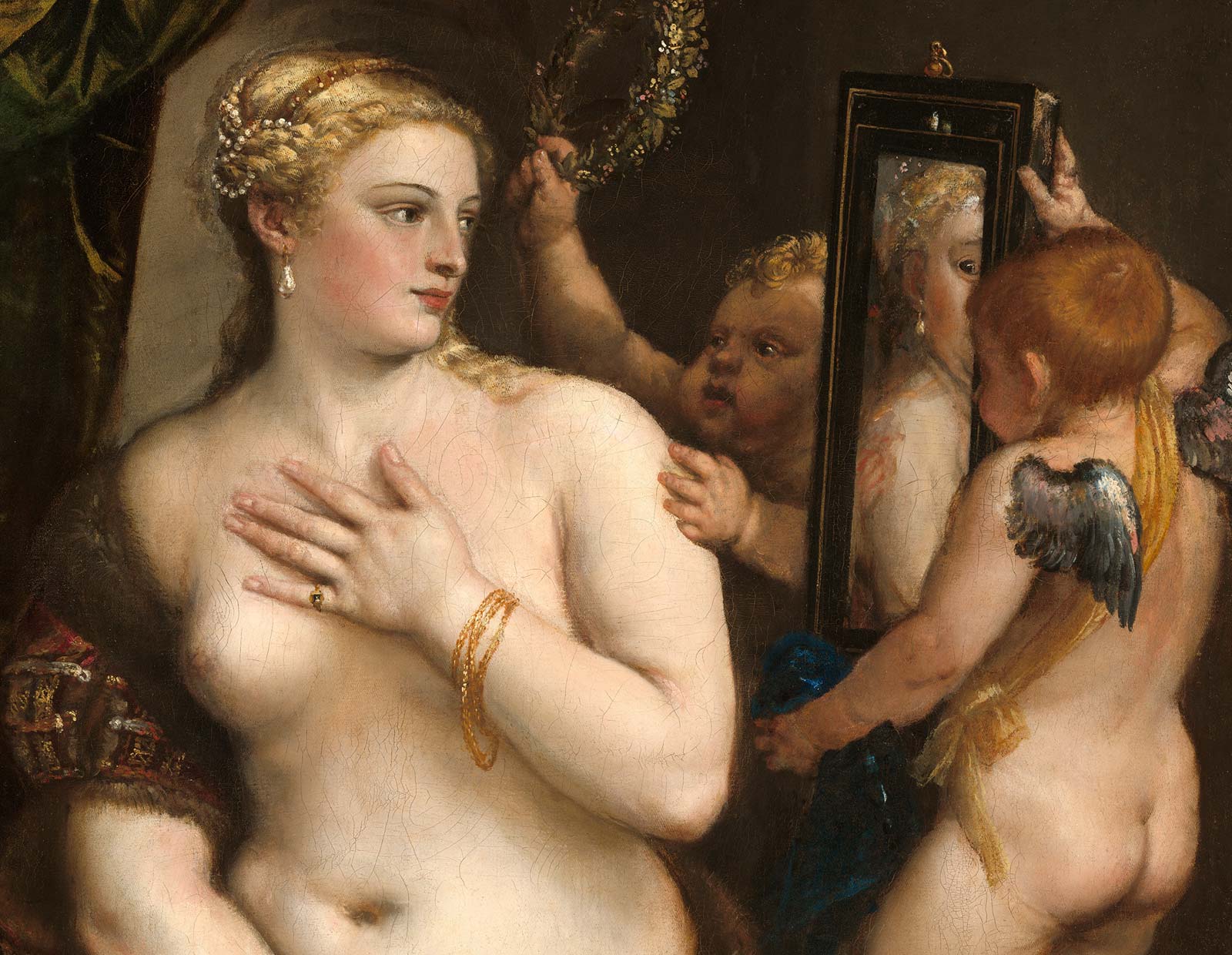 Venus with a Mirror

Oh, mirror, I envy you only because of her...
Alas! I would like to trade my place with yours...

Was it Titian himself who was meant to receive the reflected gaze of Venus, goddess of love? Did he envy, like contemporary poets, the mirror’s embrace of her face? Perhaps. There is some reason to suspect that this sensuous celebration of love and female beauty was one of the artist’s favorite paintings.

was certainly one of ’s most popular compositions. Some 15 copies and variants are known, made by the master or his assistants. This canvas, though, is by Titian’s hand alone and must have been the first of all the copies to be painted. It remained in the artist’s studio until his death, more than 20 years after he painted it.

During the Renaissance the very idea of love was allied with the contemplation of beauty, and the imagery of mirror and reflection was often found in love poetry. In Italy, the theme goes back to Petrarch’s complaint to the mirror, il mio adversario (my rival), which held the face of his beloved Laura. Many artists painted Venus—or their own mortal lovers—admiring a mirrored reflection. Why do we think this was the original Venus with a Mirror?

Other than the fact that this was the version of the painting Titian chose to keep for himself, strong evidence comes from x-ray analysis. The canvas was rotated and reused. The original horizontal image (the canvas rotated here to show the original painting in its correct orientation) depicted a man and a woman in three-quarter-length standing side by side. The lush velvet drapery that now covers Venus’ lap was originally the man’s cloak—it was left untouched when Titian repainted the rest of the canvas. Such clever reuse is a measure of Titian’s inventive genius and could only occur as he was first creating the new composition.

See Other Paintings of Venus With a Mirror

But does the shining eye caught in the mirror of Titian’s goddess really look back at itself? It is a bit ambiguous: perhaps instead she has been distracted from her own reflected loveliness, her attention drawn to something or someone outside the frame. It is tempting to understand that person as the artist working in her presence. If Titian “pictured” himself in the composition as the envious lover, it would help explain his long attachment to the work. Of course, Titian was also a busy and astutely businesslike artist and may simply have kept it as a model for copies.

Two cupids attend Venus. One holds the mirror as the other reaches to crown her with a garland. She adheres closely to the canon of female beauty extolled by Renaissance poets: blond hair, fair skin flushed with pink, red lips and arched brows. For Venus’ pose, Titian ingeniously transformed a well-known ancient statue in the Medici collection, yet this Venus has no trace of marble’s coolness. It vividly conveys the warmth and glow of yielding flesh, the richness of velvet, and the glint of gold embroidery. We sense as much as see the softness of the fur-lined robe as it brushes against her skin and the smooth perfection of her rose-tinted cheek. A cupid’s wing shimmers with iridescence.

It is the mastery—and the variety—of Titian’s brush that captures this wealth of textures. In Venus’ face small strokes are blended to reproduce her ideal complexion, and a careful line traces brows. But as she draws an arm across her breast, contours are softened to suggest a pliant body giving way under touch. A deep layering of translucent red glazes—unreadable up close—resolves into the folds of dense velvet at a greater distance. In the border, an intricate embroidered pattern is conjured by quick flashes of yellow and white highlights. In a career that spanned more than 70 years, Tiziano Vecellio, called Titian in English, was the greatest force in Venetian Renaissance painting. Probably born around 1490 in the town of Cadore in the Italian Alps, Titian moved at an early age—perhaps as young eight or nine years old—to Venice to study art there. After training briefly with a mosaicist, he entered the workshop of Giovanni Bellini, the leading painter of his generation. Titian was influenced not only by Bellini’s rich color but by the lyrically elusive pastoral and mythological scenes of fellow Bellini pupil Giorgione.

By 1510 Titian had established himself as an independent master, and after Bellini’s death was appointed official painter to the Venetian Republic. Following a succession of commissions for the courts of Ferrara, Mantua, and Urbino, Titian’s fame spread internationally. His patrons included the Holy Roman Emperor Charles V, Philip II of Spain, Francis I of France, and Pope Paul III.

Titian was a master in all genres: he produced dignified and insightful portraits, Madonnas of modesty and charm, playfully joyous mythological pictures, sensuous nudes, and meditative religious works. He took from Bellini a typically Venetian approach to color, his early works often juxtaposing brilliant contrasting hues. After about 1530, the year of his wife’s death, Titian more often worked within a more narrow tonal range, using subtle glazes to create complex nuances of color. During the last 20 years of his life, Titian's handling of paint grew looser, opening up a wider gamut of expressive possibilities. Thin glazes appear along with heavy impasto, each a mark of the artist’s own presence on the canvas.

Titian died in 1576, as an outbreak of the plague roiled through Venice, but it is not known if he died of the disease. He was buried in Santa Maria Gloriosa dei Frari, where his dramatic altarpiece, The Assumption of the Virgin, had been installed nearly 60 years before.

My rival, in whose face you’re wont to view
Your own bright eyes, which Love and Heav’n adore,
With beauty not its own delights you more
Than all that’s fair in mortal guise could do.
Its counsel, lady, which with cause I rue,
Compels me from my home so sweet before;
Unhappy exile! merit gives no pow’r
To share a station occupied by you.
But to your glass if I transferr’d could be,
Not your proud image only should you see,
Becoming self-enamour’d, to my cost.
Rightly reflect upon Narcissus’ fate;
Both his, and yours a like event await:
Although no soil has worth so choice a flow’r to boast.

Petrarch Translated: A Selection of His Sonnets and Odes [trans. John Nott]. London, 1808