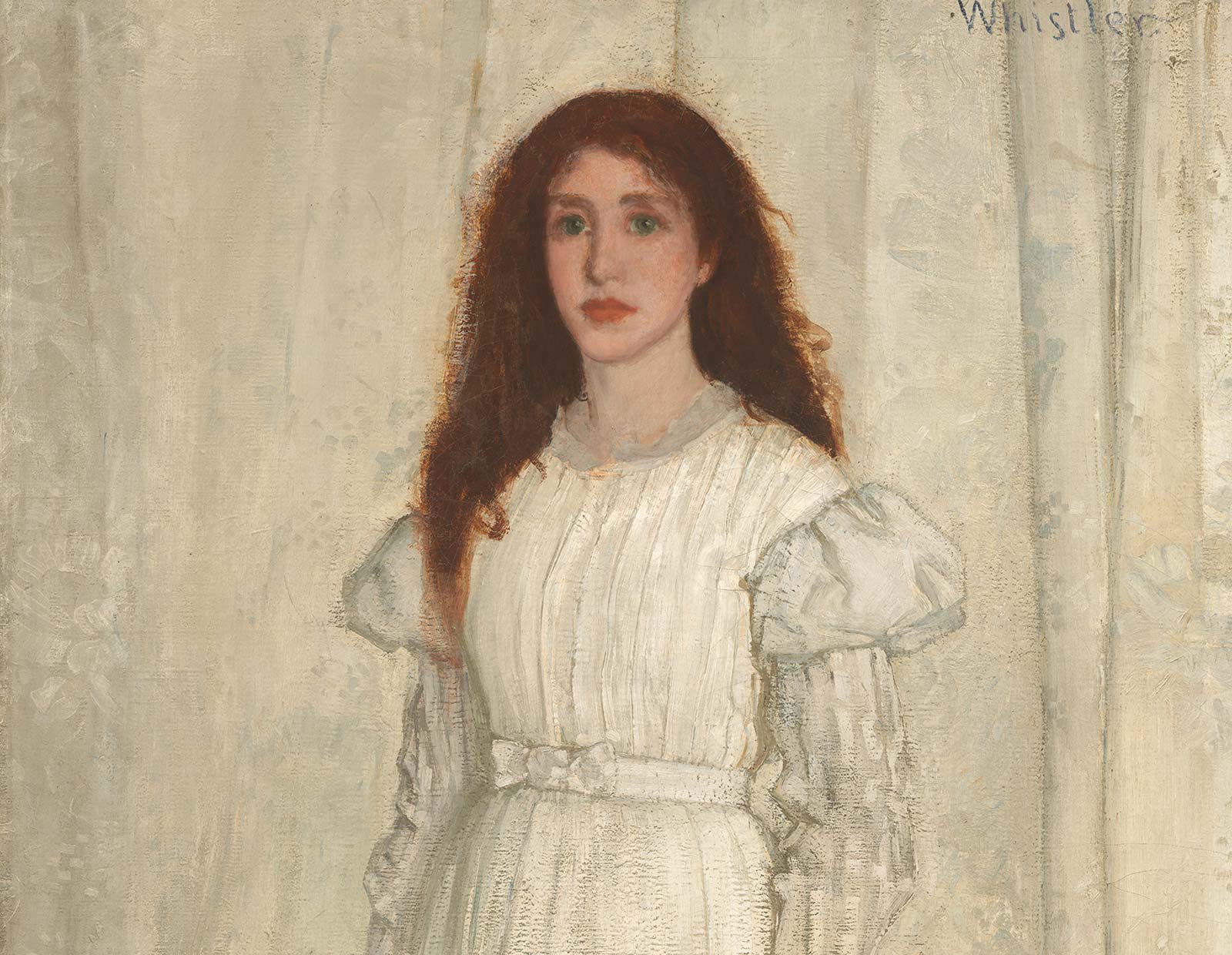 Symphony in White, No. 1: The White Girl

She looks grandly in her frame and creates an excitement in the artistic world here.... In the catalogue of this exhibition it is marked ‘Rejected at the Academy.’ What do you say to that? Isn’t that the way to fight ’em!

James McNeill Whistler on the exhibition of The White Girl at Morgan’s Gallery, London, 1863

worked furiously on during the winter of 1861–1862, rising at 8:00 each morning to paint. His model was his mistress and frequent companion, Joanna Hiffernan, a well-known beauty who also modeled for other artists of the day. Whistler lived in Paris at the time, but painted the canvas specifically for submission to the 1862 Royal Academy of Arts exhibition in London, an annual event juried by a group of artist-academicians whose choices could make or doom an artist’s career. For the 27-year-old Whistler, who was still establishing his reputation, The White Girl was meant to demonstrate his talents to the world. He was cruelly disappointed when he visited the Academy galleries a week before the salon opened to the public, searching room after room of paintings for his work, until at last he found it leaning against a wall amid the rejects. He consoled himself with the thought that “she was still beautiful.”

The picture was shown about a month later at Morgan’s, a commercial gallery in London, with the “rejected” designation. There it attained some notoriety, savaged in the press as “bizarre” and “incomplete.” The painting continued on this path: rejected by the 1863 Paris Salon, it ended up in the Salon des Refusés, a protest exhibition organized by Gustave Courbet of paintings spurned by the French Salon jurists. Shown alongside the similarly scandalous with Déjeuner sur L’Herbe by Édouard Manet, The White Girl became known as one of the exhibition’s most infamous pictures.

Flouting the conventions and standards of portraiture, The White Girl made 19th-century viewers distinctly uncomfortable. The woman pictured wears an informal cambric (lightweight cotton or linen summer fabric) housedress of a type worn in private. Her red hair is loose, contrasting vividly with the tonal white interior setting and dress. Gazing impassively, her expression is vacant and unfocused—she does not charm us, yet rivets our attention. She stands on a wolf or bearskin rug whose fierce appearance contrasts with her own blank look, and flowers drop languidly from her hands to the floor. To viewers of the period, these attributes made Hiffernan’s worldliness and lack of innocence explicit and shocking.

Whistler later appended the title with “Symphony in White: No. 1” (there were eventually three paintings in the series) to focus attention on what he viewed as the painting’s true subject: his handling of the thick white paint, its textures, and subtle tonal contrasts. The painting’s radical break with traditions of portraiture make it a bellwether of modern art.

James McNeill Whistler preferred expatriate life in London and Paris to his country of birth, finding a congenial artistic atmosphere in Europe. Whistler was gregarious, and his circle included a wide group of artists, , , , , and among them.

Born in Lowell, Massachusetts, Whistler spent a relatively short period of his life at home in the United States, then lived in Russia and England during his formative years because of his father’s professional obligations as a military civil engineer. During that period, Whistler began receiving formal instruction in drawing, attended lectures at London’s Royal Academy of Art, and studied the work of other artists. Upon returning to the United States, Whistler enrolled at West Point Academy, following in his father’s footsteps. There, he continued to demonstrate his talents in drawing, but he was ultimately dismissed from the academy in 1854 for “deficiency in conduct and chemistry.”  Following a brief attempt to work in the railway industry, Whistler moved to Europe to pursue artmaking.

In Paris, he studied drawing alongside Edgar Degas and then painting at Charles Gleyre’s studio. His work did not garner much attention until Symphony in White, No. 1: The White Girl caused its commotion in 1862–1863 in both London and Paris. The painting marked a transitional moment in Whistler’s career when his interest in a loose and abstract style, and experiments with color, form, and texture began to supplant his pursuit of realistic forms of painting.

Whistler experienced another round of notoriety in the 1870s when he began painting the groundbreaking Nocturne series of Thames River views. Nocturne in Black and Gold: The Falling Rocket, 1875, captured the effects—atmospherics and impressions—of fireworks over the river rather than a concrete image, a subject that was radical for a public accustomed to more traditional forms of painting. Critics attacked, and John Ruskin famously likened Whistler’s art to the act of “flinging a pot of paint in the public’s face.” The artist sued for libel and won, but his reputation was damaged, and he suffered financial difficulties. A timely commission to create a portfolio of etchings of Venice took him to Italy. Returning to England the following year, he was able to rebuild his reputation and achieved great renown and success during the 1880s and 1890s, his work sought by collectors and museums alike. He died in London in 1903 and was the subject of a memorial exhibition in Boston later that same year.