Hidden Paintings in the Work of Frédéric Bazille

When Bazille was dissatisfied with his work or short of funds, he regularly recycled used canvases to paint new pictures. This was not an uncommon practice, but the frequency with which Bazille did so has only recently come to light.

With the help of the Centre for Research and Restoration of the Museums of France (C2RMF) and the laboratories at the National Gallery of Art in Washington and other American museums, nearly half of Bazille’s known works have been x-rayed and a dozen lost compositions rediscovered to date. Four of these hidden compositions are presented here with a tool that allows you to scroll back and forth between the painting on the surface and the composition underneath made visible through x-radiography. 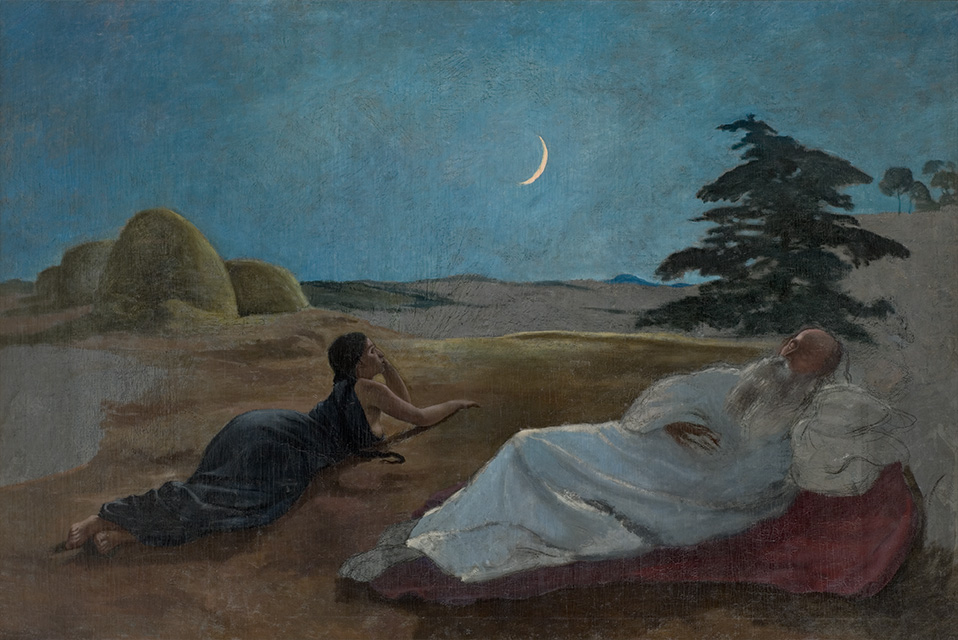 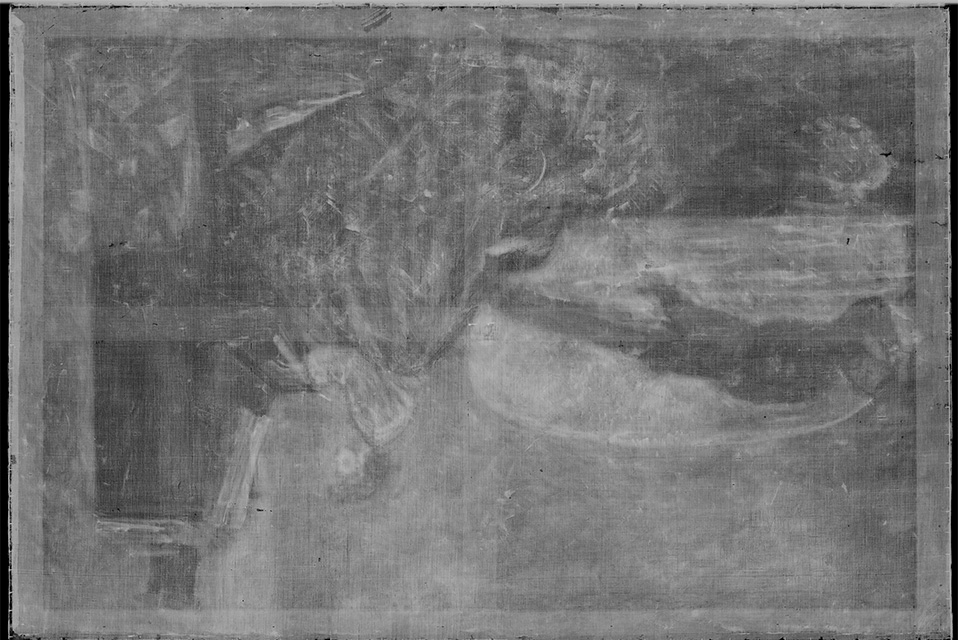 In 1865, Bazille embarked on a large canvas that was intended to be his first submission to the official Paris Salon, Young Woman at the Piano. He chose a modern subject for his debut: a girl playing a piano and a young man listening to her.

In a letter to his mother, Bazille, seemingly overwhelmed by the pressure of exhibiting publicly for the first time, recounted his struggles with this painting:

“The terribly difficult part is the woman; there is a green satin dress, which I hired, and a blond head that I am really afraid of not doing as well as possible although Courbet complimented me on it when it was just begun.”

The painting was rejected by the exhibition jury, and was never seen again. Presumed lost or destroyed, it was instead merely painted over with a moonlit scene from the Old Testament story of Ruth and Boaz

Study of a Young Male Nude 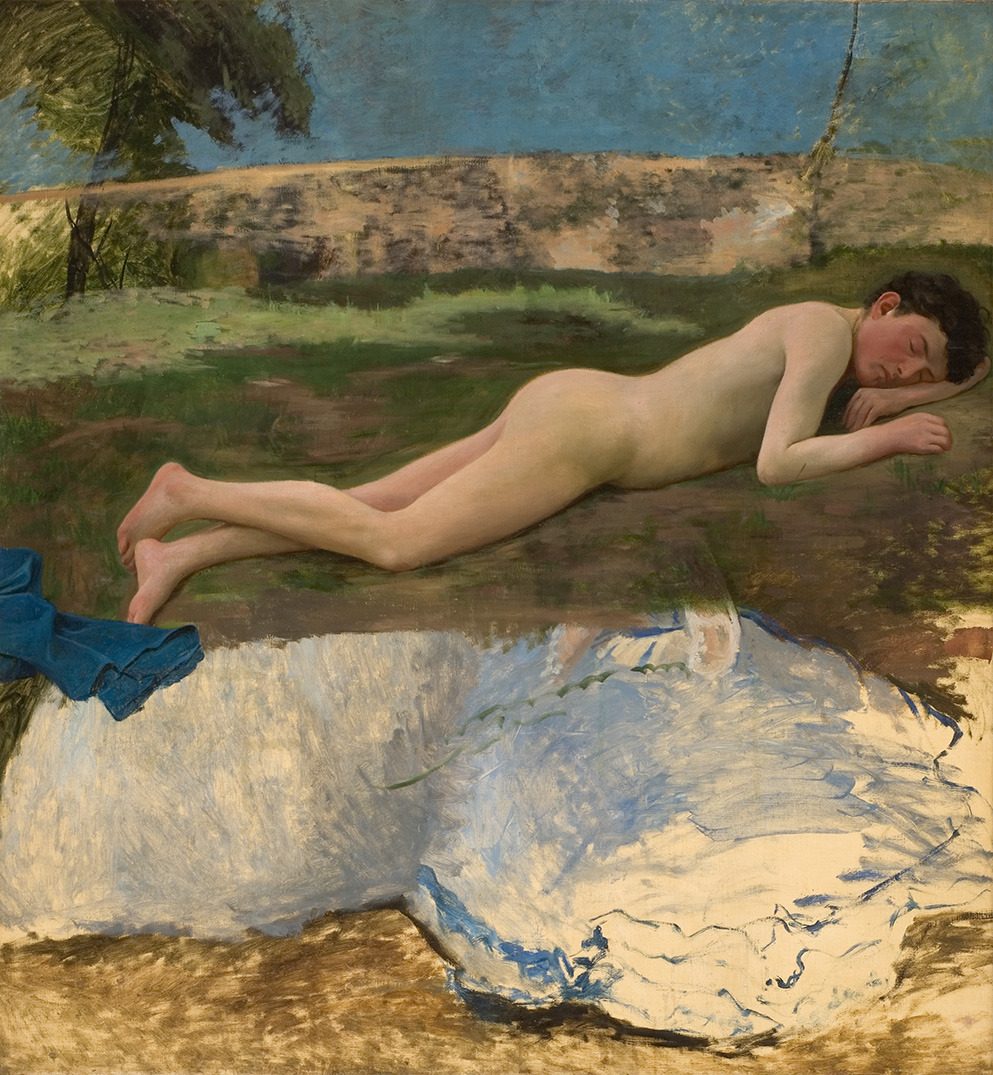 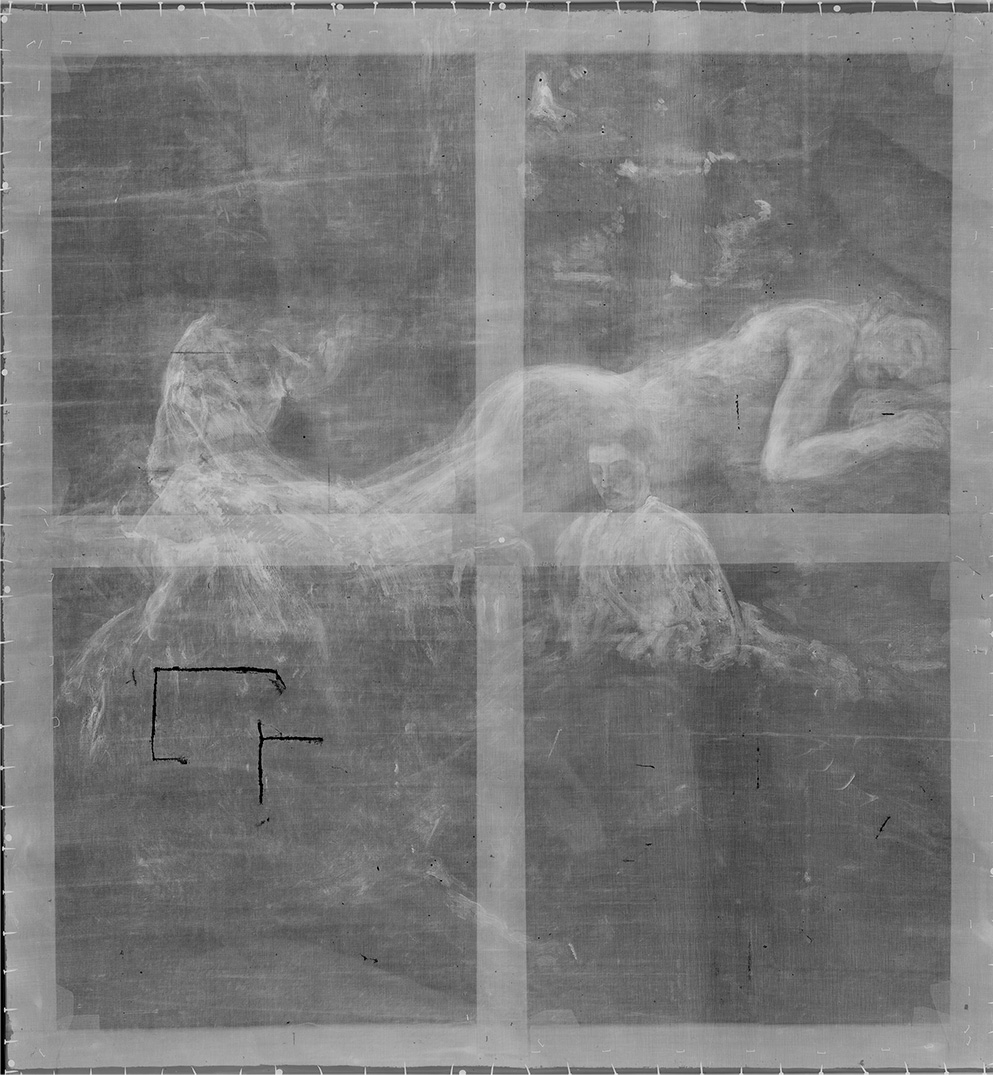 This curious painting is comprised of two separate and distinct compositions: a scene of two women seated out of doors, their skirts visible in the lower half of the canvas, and a figure of a male nude reclining in a landscape that was painted directly over the earlier composition, obscuring its top half. Presumably, Bazille intended to complete the second composition but it remained unfinished at the time of his death. 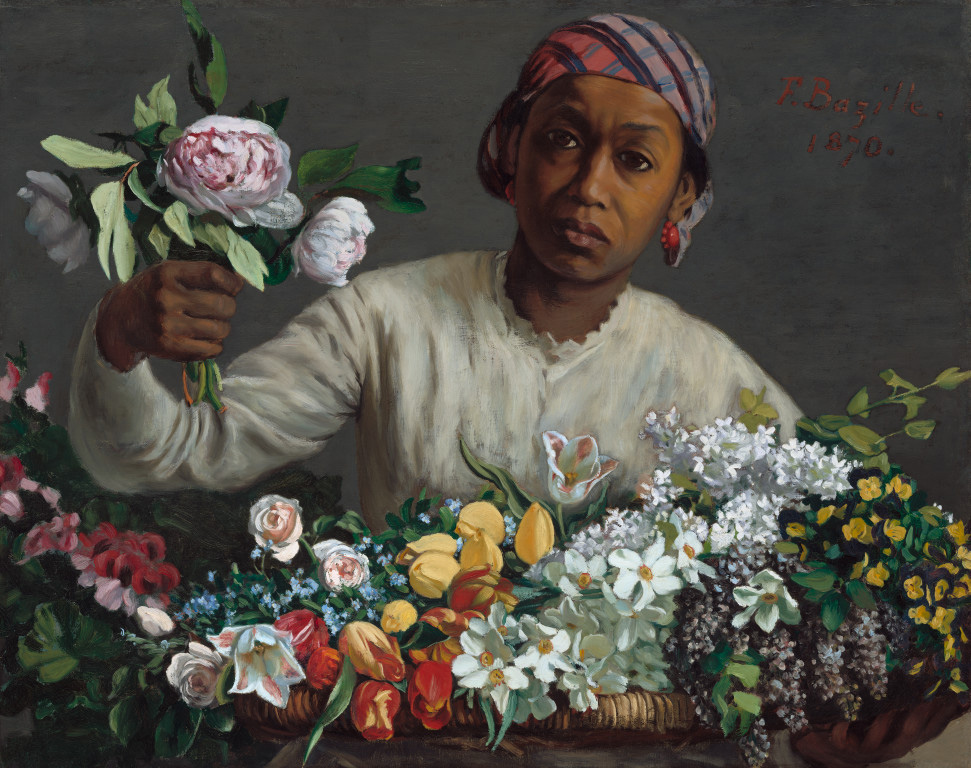 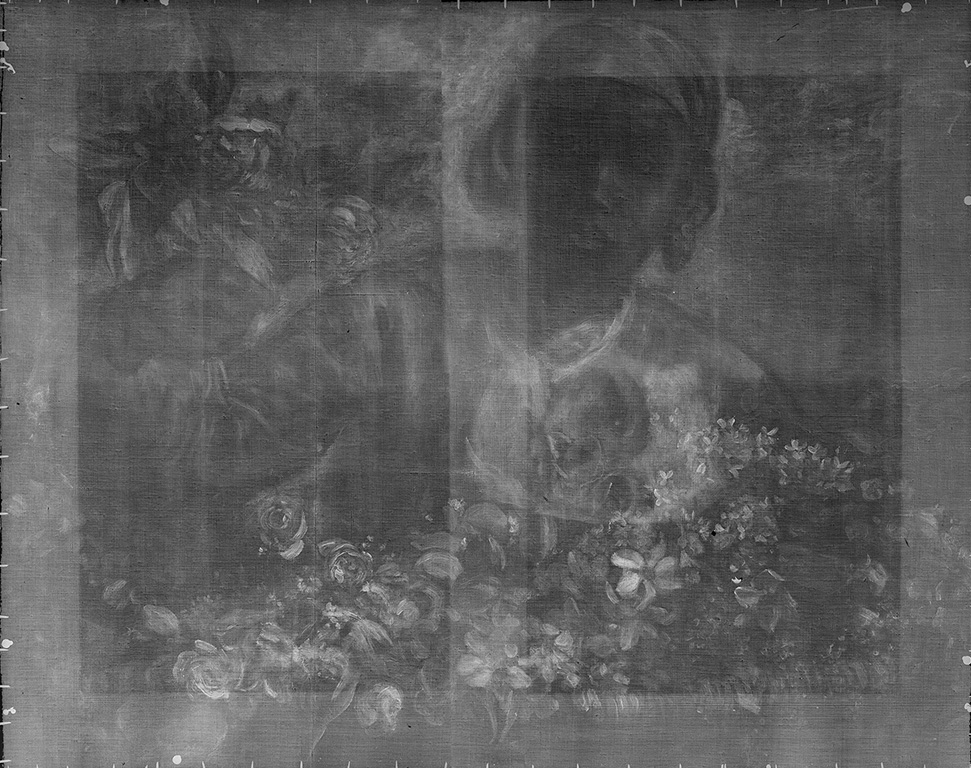 When Bazille reused a canvas, he usually did not apply a new ground layer to cover over the earlier composition. Instead, he would rotate the canvas 90 or 180 degrees, changing its original orientation before starting anew. Here a vertical composition showing a bust-length portrait of a man was turned on its side and covered over by a new painting of a woman carrying a basket of flowers in a horizontal format. 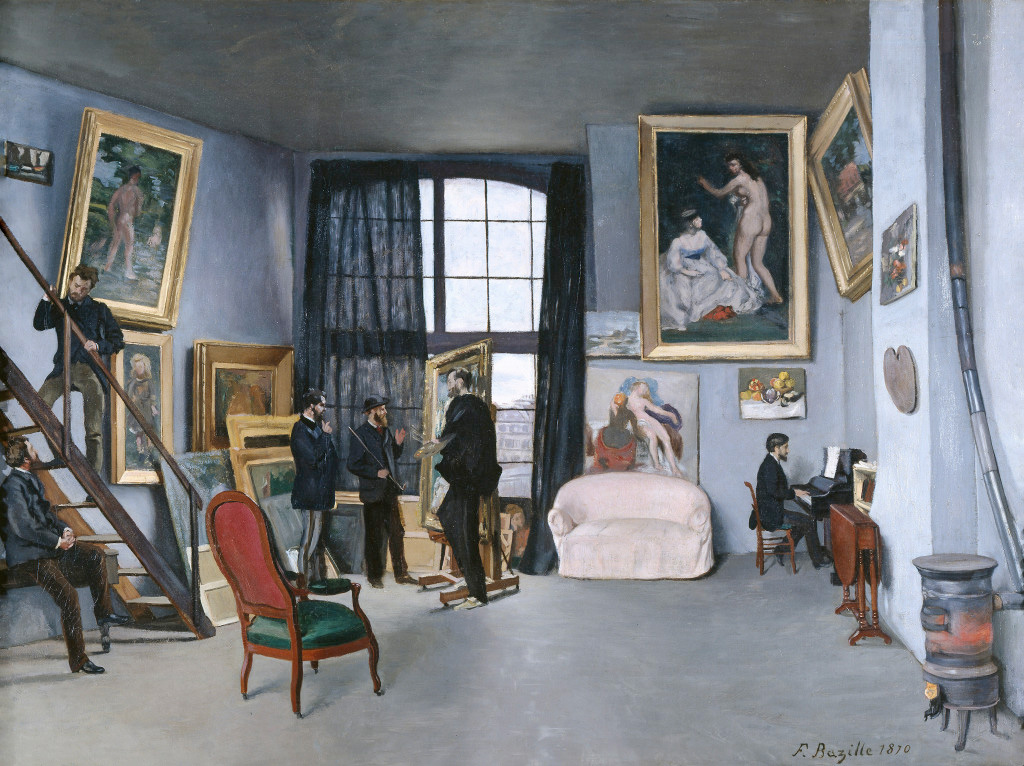 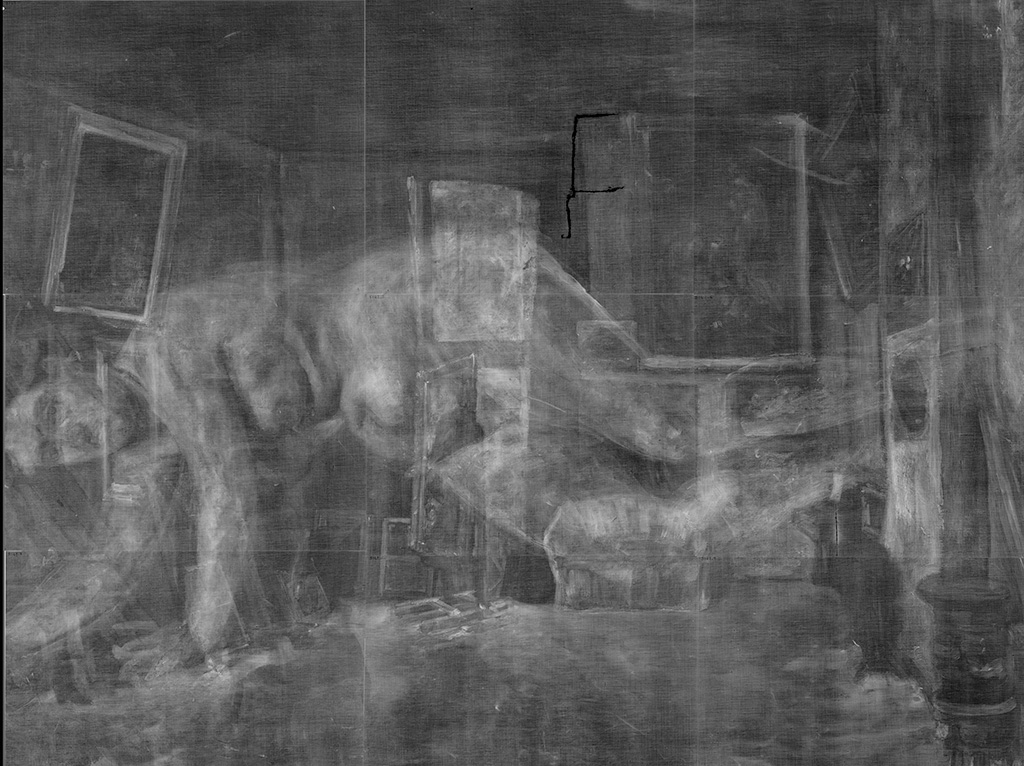 Bazille painted this scene on top of an earlier composition showing a nude female figure very much like the one in Renoir’s Diana the Huntress, a work completed in Bazille’s studio on the rue Visconti. Bazille admired this painting, which he described as “an excellent picture that has astonished everyone.” The painting that lies beneath Bazille’s Studio is either a copy by Bazille after Renoir’s painting or a study painted by Renoir in preparation for the larger final work.