The exhibition Verrocchio: Sculptor and Painter of Renaissance Florence includes two works from the collection of the National Gallery of Art that were recent subjects of scientific study and analysis: Andrea del Verrocchio’s Putto Poised on a Globe and Domenico Ghirlandaio’s Madonna and Child. Technical examination by museum conservators and scientists provided clues as to how these works were made and shed light on artists’ workshop practices in Renaissance Florence.

The Making of Verrocchio’s Putto Poised on a Globe 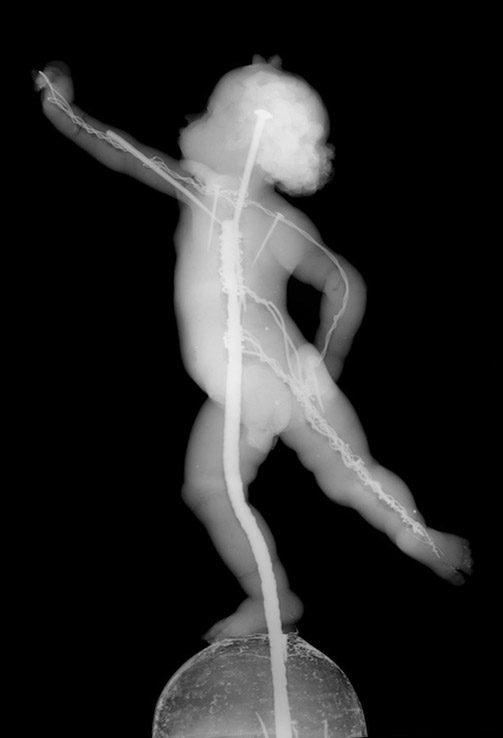 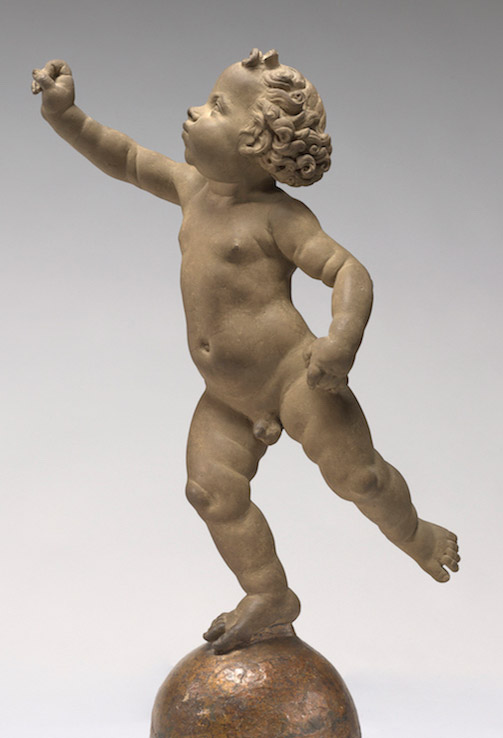 Verrocchio’s Putto Poised on a Globe is made of terra cruda, which is raw, unbaked clay. Unbaked clay is very fragile and lacks the hardness and strength of terracotta, or baked clay. (Verrocchio’s bust of Giuliano de’ Medici, also in the exhibition, provides an example of a terracotta work.) The especially delicate Putto is riddled with a network of fine cracks, some formed as its clay air-dried, some as the sculpture was handled over time, making its survival for more than 500 years all the more remarkable.

The clay is supported by an interior skeleton made of malleable iron rods, nails, and twisted wires. This armature enabled Verrocchio to move and adjust the figure’s limbs and body this way and that as he added wet clay and designed the sculpture. This sturdy armature contrasts with the playful figure of the putto, which has a lightness that makes it seem about to float off the base.

A small piece of armature wire is visible between the thumb and middle finger of the extended right hand. Beneath the clay in the palm of the left hand, you may also see the shape of a nail, which secures it to the putto’s hip.

A Rare Glimpse at the
Process of a Renaissance Sculptor

Verrocchio probably made the work as a step toward creating a bronze sculpture—perhaps one that might have resembled Putto with a Dolphin, another sculpture in the exhibition, which stood upon a fountain. The clay putto was never intended to be a finished work of art, as we see it today. Clay allowed Verrocchio to model the figure freely and create supple details such as the putto’s curly hair, which seems to blow in the wind. Viewing the sculpture under high magnification revealed that wool fibers were mixed into the clay. Florence’s thriving textile industry would have provided a ready source of wool remnants. The addition strengthened the sculpture, allowing the artist to preserve it as a model for students to copy in his studio and helping it survive to this day.

The putto stands on a rounded wooden base that at some point was repainted and given a decorative molding, leading scholars to ask whether the entire base is a later addition to the sculpture. X-rays have provided the answer. They show that the central armature extends through the base and is nailed to its bottom. This proves that the base is original to Verrocchio, who used it as a stand while he made the sculpture.

Domenico Ghirlandaio’s Madonna and Child is the only painting with a gold background in the exhibition Verrocchio: Sculptor and Painter of Renaissance Florence. Gold was pounded paper-thin to create gold leaf and applied to the surface—a practice that would have been familiar to Ghirlandaio, who trained as a goldsmith before taking up painting.

Paintings depicting Mary and the Christ child against a gold background had been widespread in Italy since the 13th century. They reflect influence from Byzantine icons and mosaics, in which expanses of glimmering gold surround images of holy figures, indicating that they dwell in an otherworldly, heavenly realm. The gold ground emphasizes Christ’s divinity and Mary’s role as the mother of God.

When Ghirlandaio made the painting in the Gallery’s collection, around 1475, most Florentine artists had abandoned gold backgrounds. They favored naturalistic landscapes or architectural settings that shifted the emphasis to Christ’s human presence in this world, as seen here in Verrocchio’s Madonna and Child.

Ghirlandaio’s use of an out-of-date background caused scholars to wonder whether the artist originally had painted a landscape that a later owner chose to have scraped off and replaced with gold leaf.

After conservators studied the painting with a microscope, scientists examined it with a process called x-ray fluorescence imaging, which is used to help identify artists’ pigments. These technical analyses revealed that the gold background extends beneath the painted edges of the figures. This proves that Ghirlandaio intended it to be gilded from the outset, probably at the request of a buyer with old-fashioned taste.

Is All That Glitters Gold?

In addition to the background, other areas of Ghirlandaio’s painting appear to be gold, such as the collar of Christ’s robe, parts of his halo, and the border and lining of Mary’s cloak. But is all that glitters actually made of gold? To answer that question, scientists used x-ray fluorescence imaging to identify the different elements, such as gold, tin, or lead, that could be found in the materials used by the artist. In the images produced by this analysis, gold shows up as yellow, tin-based pigments as red, and pigments made of lead mixed with tin as green.

The technical study revealed that real gold was used for the background, on Christ’s halo, and as highlights in Mary’s garments. In other areas that appear golden, the artist used gold-toned paints. The green areas in the x-ray fluorescence images were painted with a pigment known as lead-tin yellow. The red areas contain a tin-based pigment called mosaic gold. Black indicates the absence of gold, tin, or lead.

The use of imitation gold would have saved on expense. Because mosaic gold has a more subdued shimmer than real gold, Ghirlandaio may also have chosen it to vary the golden tones in his painting.

The presence of mosaic gold in Ghirlandaio’s painting sheds light on his early career. A pigment containing no real gold, mosaic gold is rarely found in Florentine paintings. It appears, however, in two paintings in the exhibition: the Madonna and Child painted entirely by Verrocchio, and the Madonna and Child with Two Angels, which he painted with help from assistants. The use of this unusual pigment is therefore a distinctive feature of Verrocchio’s workshop.

Art historians have long suspected that the young Ghirlandaio trained with Verrocchio because of stylistic similarities between works by the two artists. The discovery of mosaic gold in Ghirlandaio’s Madonna and Child provides physical evidence confirming their connection. Ghirlandaio evidently learned of mosaic gold in Verrocchio’s studio and continued to use it after he left to become an independent artist.

Early Renaissance and Byzantine paintings, many featuring gold backgrounds, are on view in the National Gallery of Art West Building, Main Floor Galleries 1–3.