A Design for the East Building 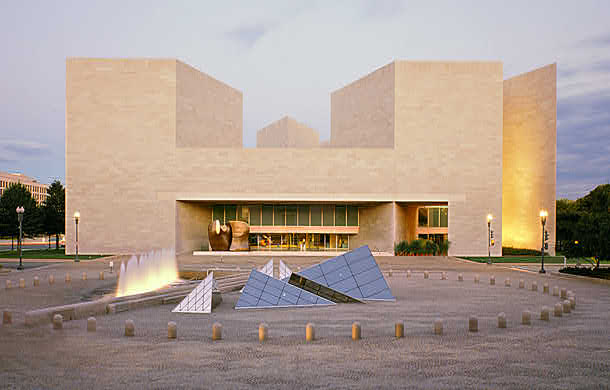 The National Gallery of Art's East Building, opened to the public on June 1, 1978. This web feature presents drawings by the architect I. M. Pei and his design team, and a representation of the three-dimensional model for the project. Born in China in 1917, Pei moved to the United States at eighteen to study architecture, and eventually received degrees from the Massachusetts Institute of Technology and Harvard University. He opened his own firm in New York City in 1955.

On July 9, 1968, the trustees of the National Gallery selected Pei to design a building to provide additional space for the permanent collection and temporary exhibitions, as well as a new center for research in the history of art. The building was to be constructed on the plot of land directly east of the West Building that Congress had reserved for the museum at its establishment in 1937.

The architect faced several challenges. The new building had to fit an irregularly shaped, trapezoidal site; conform to the monumental scale of the Mall; and harmonize with John Russell Pope's classicizing West Building, completed in 1941. During the laborious design process, Pei and a small team of young architects explored many creative possibilities for the building's plan, exterior profile, and roofing of the great atrium. The drawings and models shown in this program illustrate various phases in the evolution of the final design. They were selected from more than 150 design drawings and models for the project that I. M. Pei & Partners gave to the archives of the National Gallery of Art in 1986. 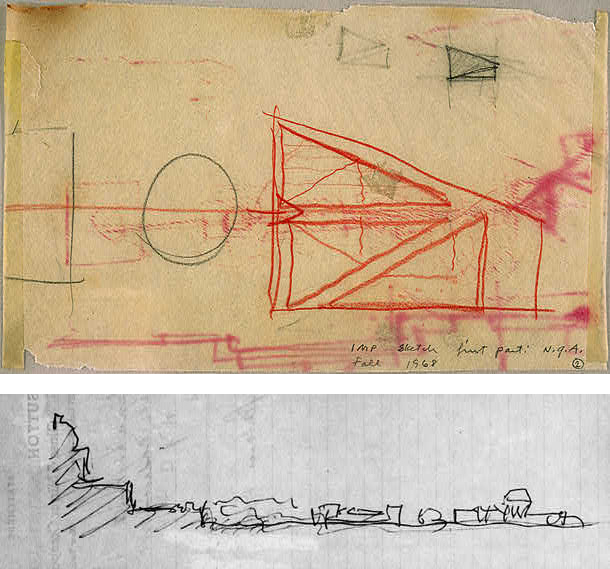 In a moment of insight, I. M. Pei solved the problem of the site's irregular shape by dividing it into an isosceles triangle and a smaller right triangle. He later recalled, "I sketched a trapezoid on the back of an envelope. I drew a diagonal line across the trapezoid and produced two triangles. That was the beginning."

The early sketch (top) shows the division of the site into two triangles. The West Building is represented by the lines to the left of the drawing, with the arrow suggesting its strong east-west axis.

In the quick study of the urban context for the building (bottom) Pei showed the profile and proportions of the East Building in relationship to the West Building and the U. S. Capitol. 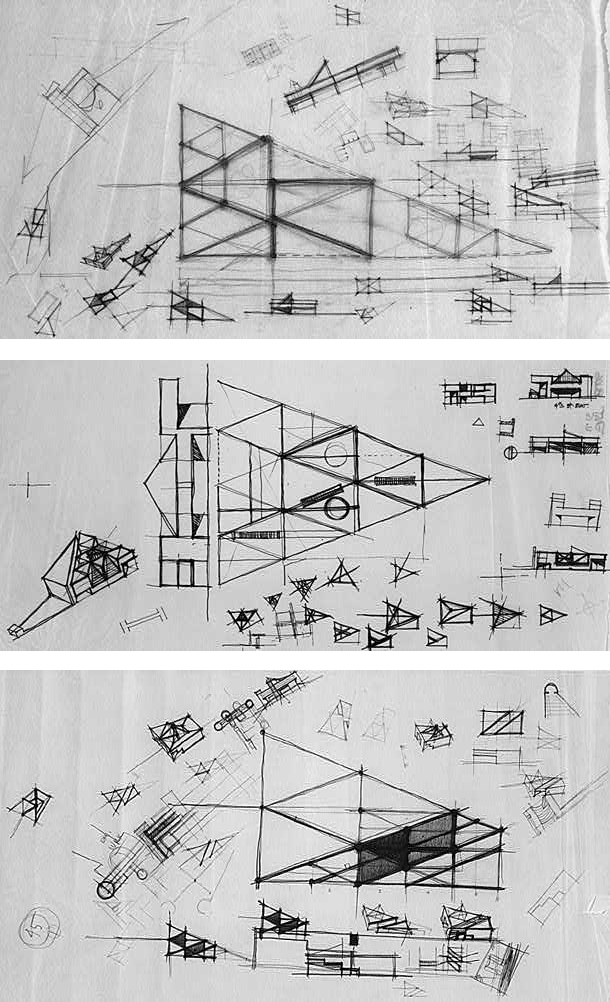 During the fall of 1968 and winter of 1969, Pei and his design team explored the underlying geometry governing the structure of the new building. Many of their ideas are recorded in quick working studies, some relating closely to Pei's initial plan based on two triangles and others testing alternative possibilities. Each study may reflect only brief discussion, but taken together they provide insight into the design process.

The top drawing shows the theoretical point at which the lines formed by the Pennsylvania Avenue and Mall sides of the site would converge, and the relationship of the building's footprint to this larger shape. The small surrounding drawings explore other geometrical plans and a possible raised skylight structure for the building.

In the middle sketch the architects are studying the interior geometry of the isosceles triangle and considering how to accommodate circulation between floors. An alternative design for the building's Fourth Street facade and various roof treatments appear in the surrounding drawings.

The bottom design explores the possibility of occupying the entire site by adding, at the east end, an additional module to Pei's initial conception. The result emphasizes parallel lines instead of triangles. 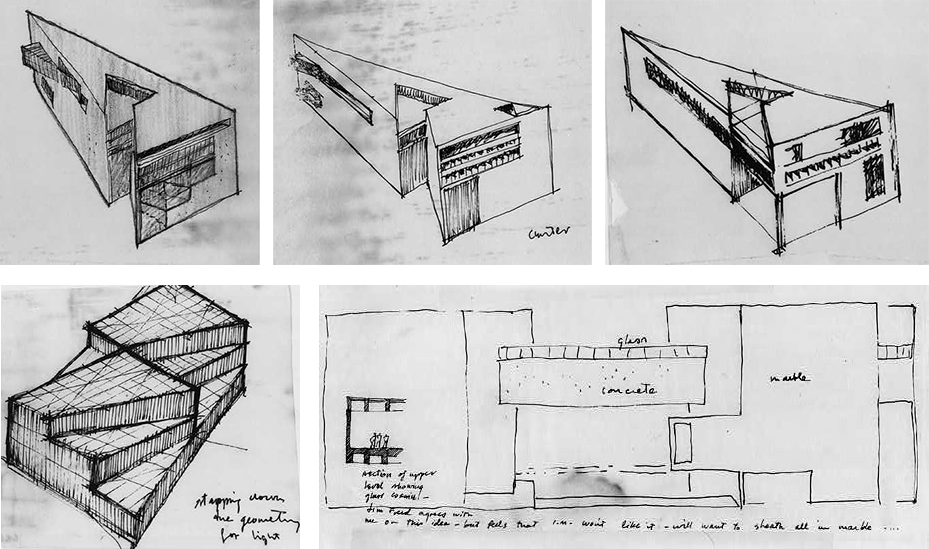 Even before Pei and his team had determined the final ground plan for the new structure, they were exploring other aspects of the design. In quick sketches, they studied a variety of ideas for the building's facades and examined ways to bring light into the museum to enliven its interior and illuminate works of art.

The design of lively and interesting facades for the Mall and Third Street was an important concern of the architects. The three studies above explore variations on a possible treatment of these facades. The East Building is the only structure on the Mall without a public entrance facing in that direction.

The drawing at lower left is for a design that would allow light to penetrate the interior of the building through skylights at several levels. The drawing at lower right shows a plan close to the final design of the Fourth Street facade, but with a horizontal band of windows above the entrance. The architects' discussions are reflected in notes on the drawings. 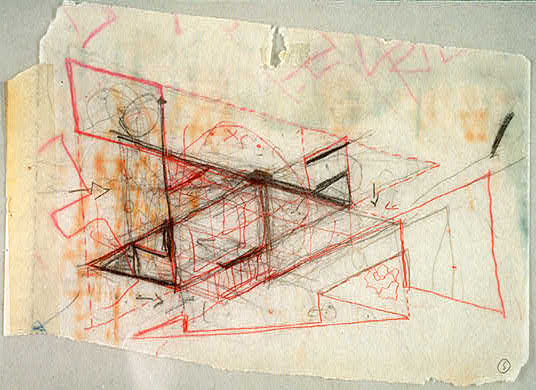 Pei's rare drawings are typically little more than quick scribbles to communicate his ideas in meetings or conversations. He observed that he would "put ideas in the head and eliminate them in the head....Drawing is not fast enough, for me anyway."

Early in 1969, Pei's design was refined and elaborated to near-final form. The two triangles of the architect's original conception were pulled apart to create a slot that would emphasize the separateness of the two spaces: one for the museum's public functions and the other for its study center. Three towers were beginning to emerge at the corners of the isosceles triangle, balancing the east-west axis of the West Building. 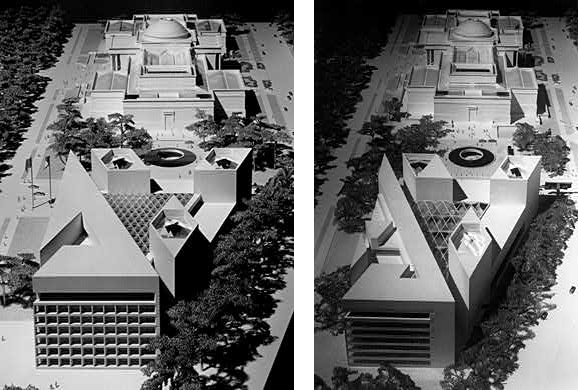 This model was made to show how the museum would appear after the East Building was completed. In its first version, shown in the photograph at lower left, the building's Third Street and Mall facades had deeply recessed windows that created a grillelike pattern. Later, these facades were completely revised. In the final version, shown in the model and in the photograph at lower right, the Third Street facade became a sleek plane articulated by bold horizontal bands of marble. The Mall facade was transformed into a window wall, partially angled back to reflect the building's geometry and broken by a tall window to illuminate the library within.

Pei's original plan for the plaza between the East and West Buildings included a circular pool, an echo of the grand rotunda of the original building. Eventually this plan was replaced by scattered skylights ("crystals") and a waterfall to add light and motion to the concourse linking the two buildings underground. 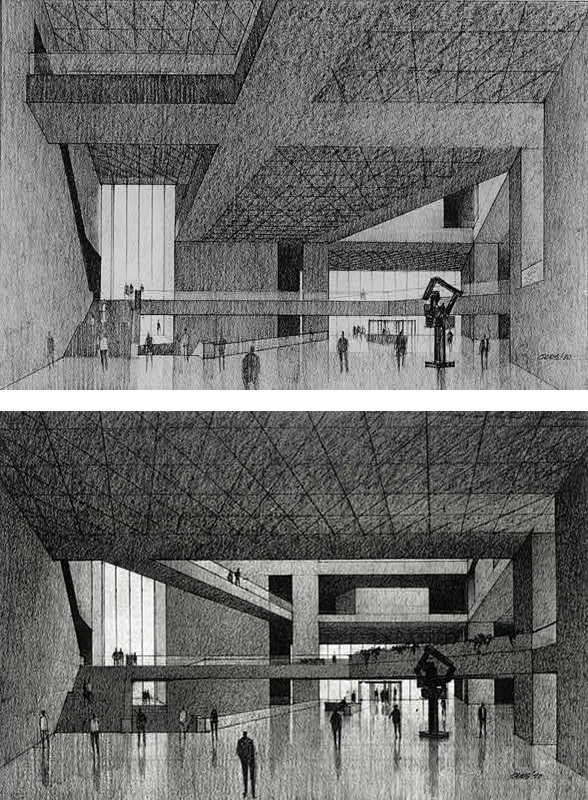 In November 1970, with ground breaking only months away, Pei and his team turned their attention to the vexing question of the roof for the central atrium. To help the designers envision the appearance of the interior space, Pei called on artist/architect Paul Stevenson Oles to make perspective drawings that also depicted the textures of the building materials and the effects of light in the space.

The first idea for the atrium called for a coffered concrete ceiling (the underside of a high upper floor) over the enormous expanse. In drawings Oles made to test this concept, the ceiling seems to overpower the interior, creating what the architects feared would be a "barnlike" atmosphere. This discovery led to a major rethinking of the atrium design.

In the study on top, a high upper floor covers much of the atrium.

By January of 1971, Pei had agreed that instead of a concrete ceiling a skylight system should be designed, which would open the atrium to natural light. The tops of the towers at the three corners of the triangular atrium would be visible through the glass to help orient visitors.

In the left drawing the effect of the high skylight system in the atrium can be seen, dwarfing trees, visitors, and potentially works of art.

The right drawing was prepared within a week of the one on the left. It introduces a concrete bridge, seen in the upper foreground, to help bring human scale to the enormous space. The architects still were dissatisfied with the result.

The concept of an open interior court was an important breakthrough, yet Oles' drawings again revealed problems in the design. The drawings showed that the high skylights with their small panes of glass would be out of proportion to the grand atrium space. The architects also feared that the many small metal pieces of the skylight frame would read as a heavy cobweb, distracting attention from the essential geometry of the space. 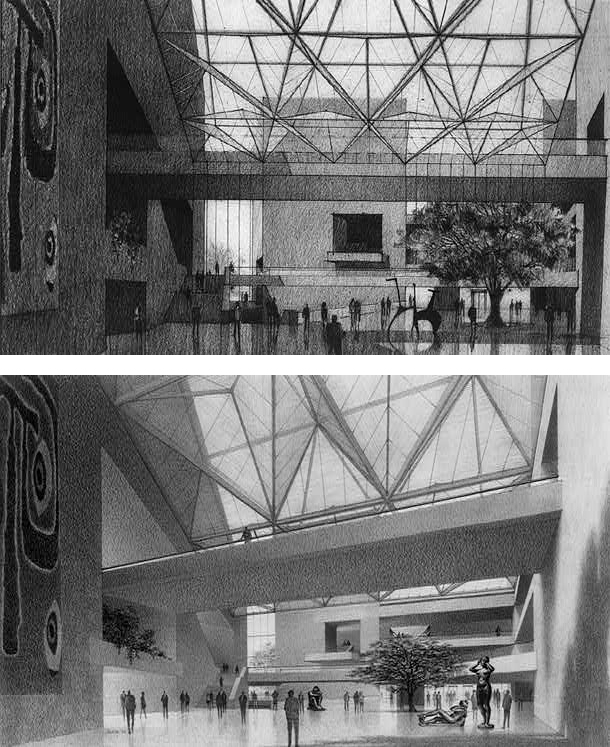 In the end, the architects turned to the building's triangular geometry for their solution: a sculptural structure composed of steel-framed modules. The base of each module forms an isosceles triangle, the sides of which have the same 2:3 ratio found in the building.

The top drawing was the first workable plan for the space-frame system, the steel and glass structure spanning the atrium. The space frame is composed of larger three-dimensional modules resting at a lower level than the skylights.

In the final design for the space frame, tubular aluminum bars were placed against the glass panels to reduce glare in the atrium without diminishing the play of light in the space. The atrium as built appears remarkably similar to the rendering on the bottom, completed in June 1971. 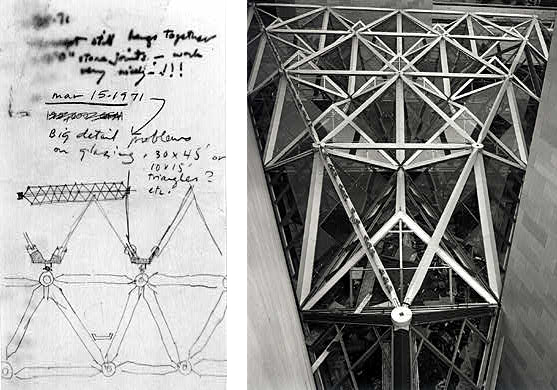 The study on the left shows a design for one of the nodes that supports the space frame and locks the beams into place. As built, each of the space-frame tetrahedrons measures 30 feet by 45 feet. The proportions of the entire span of the atrium are in the same 2:3 ratio: 225 feet on two sides by 150 feet on the other.

When the architects conceived the atrium space frame spanning 16,000 square feet, no similar structure had been successfully built on such a scale. The framework consists of enormous five-ton nodes of cast steel welded in place to beams of rolled steel at very high temperature. Craftsmen contributed enormously to the project's success, ultimately earning twenty-three awards for their work. 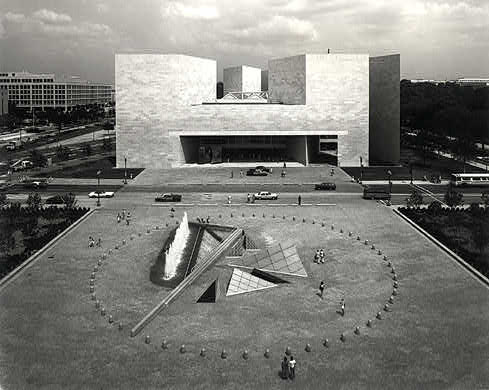 East Building of the National Gallery of Art shortly after it opened in June 1978. The space-frame structure is visible above the main entrance.