Albrecht Dürer: Master Drawings, Watercolors, and Prints from the Albertina 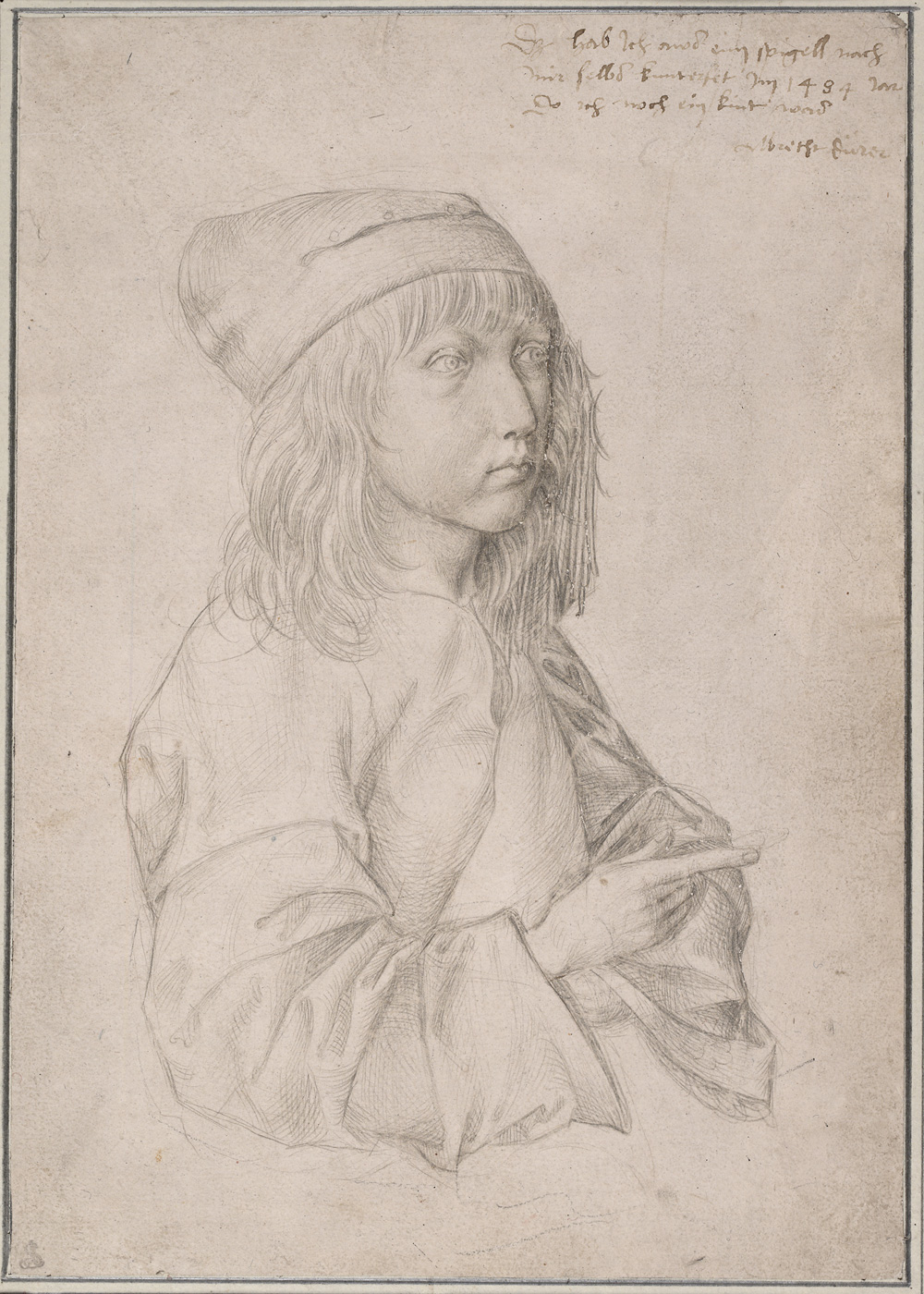 Dürer began studying his own likeness at a remarkably young age, initiating a practice of self-scrutiny that would be a hallmark of his career. The inscription at the upper right of the sheet states, "I drew this after myself from a mirror in the year 1484 when I was still a child." Despite a certain degree of clumsiness in the depiction of the drapery and bodily proportions, this image reveals the artist's considerable skill in handling silverpoint, a traditional method of drawing that was difficult to correct. 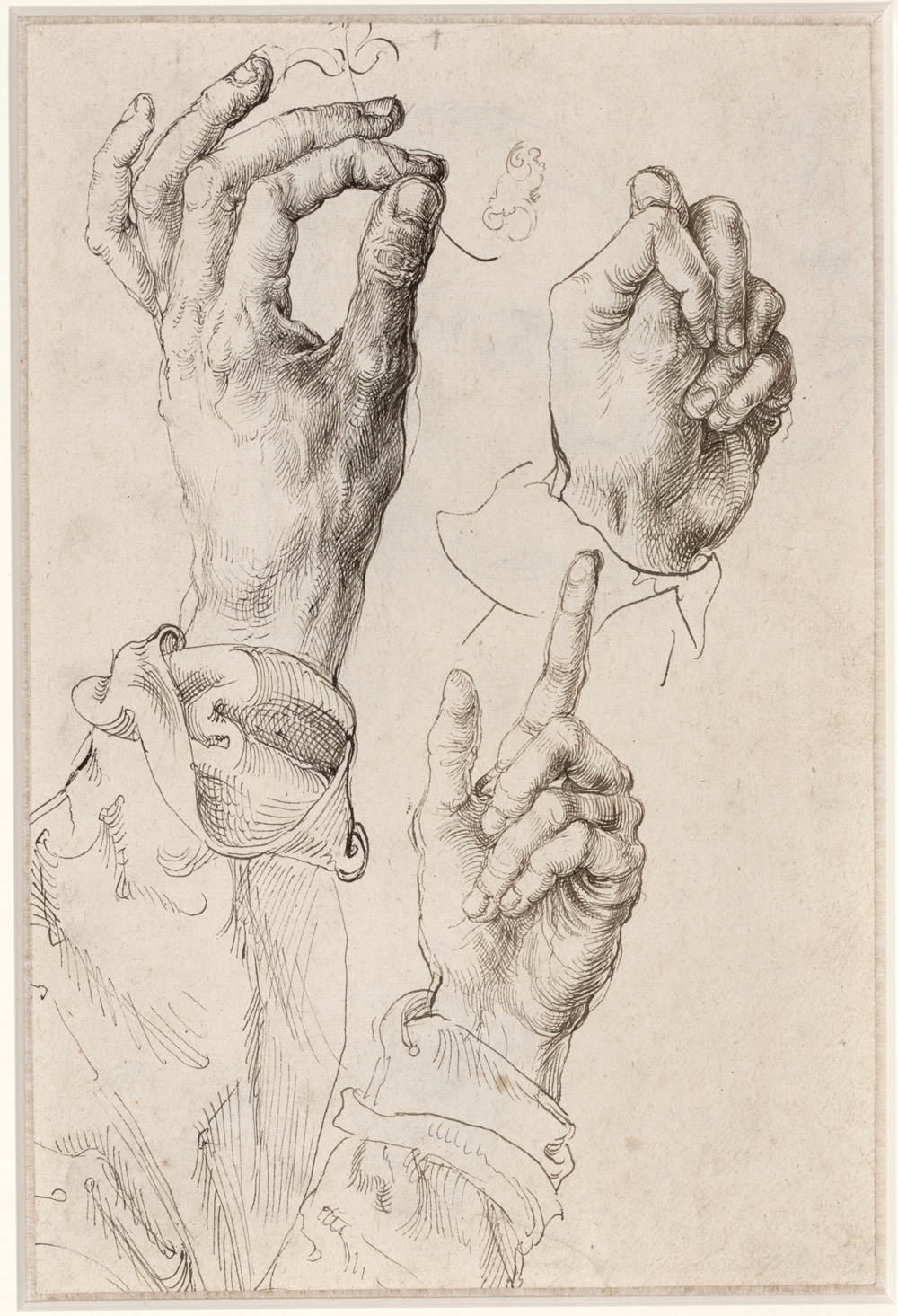 This array of expressive hand gestures—all modeled by the artist himself—can be interpreted according to a traditional pictorial vocabulary dating back to the Middle Ages. The pointing finger is usually identified as a rhetorical gesture indicating speech; the hand elegantly holding the stem of a flower is understood as the sign of a man wooing his bride; and the third hand is engaged in a well-known crude gesture. These carefully delineated studies not only display the artist's facility with a pen, but also together create a witty trio of gesticulations. 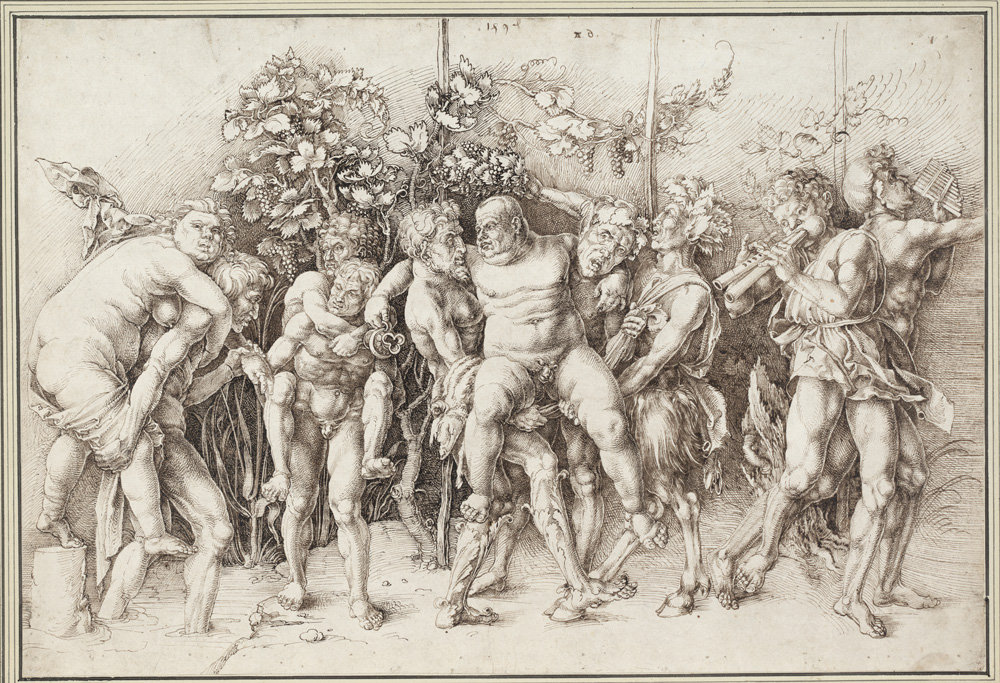 This elaborate drawing, a copy after an engraving by Andrea Mantegna from the later 1470s, was made in 1494, when Dürer was traveling south as far as Venice for the first time. Using short pen strokes, hatchings, and cross hatchings, Dürer replicated the visual effect of the engraved lines of Mantegna's print, but embellished the curvature of the figures' bodies and the vegetal forms to create a more sculptural, three-dimensional effect. 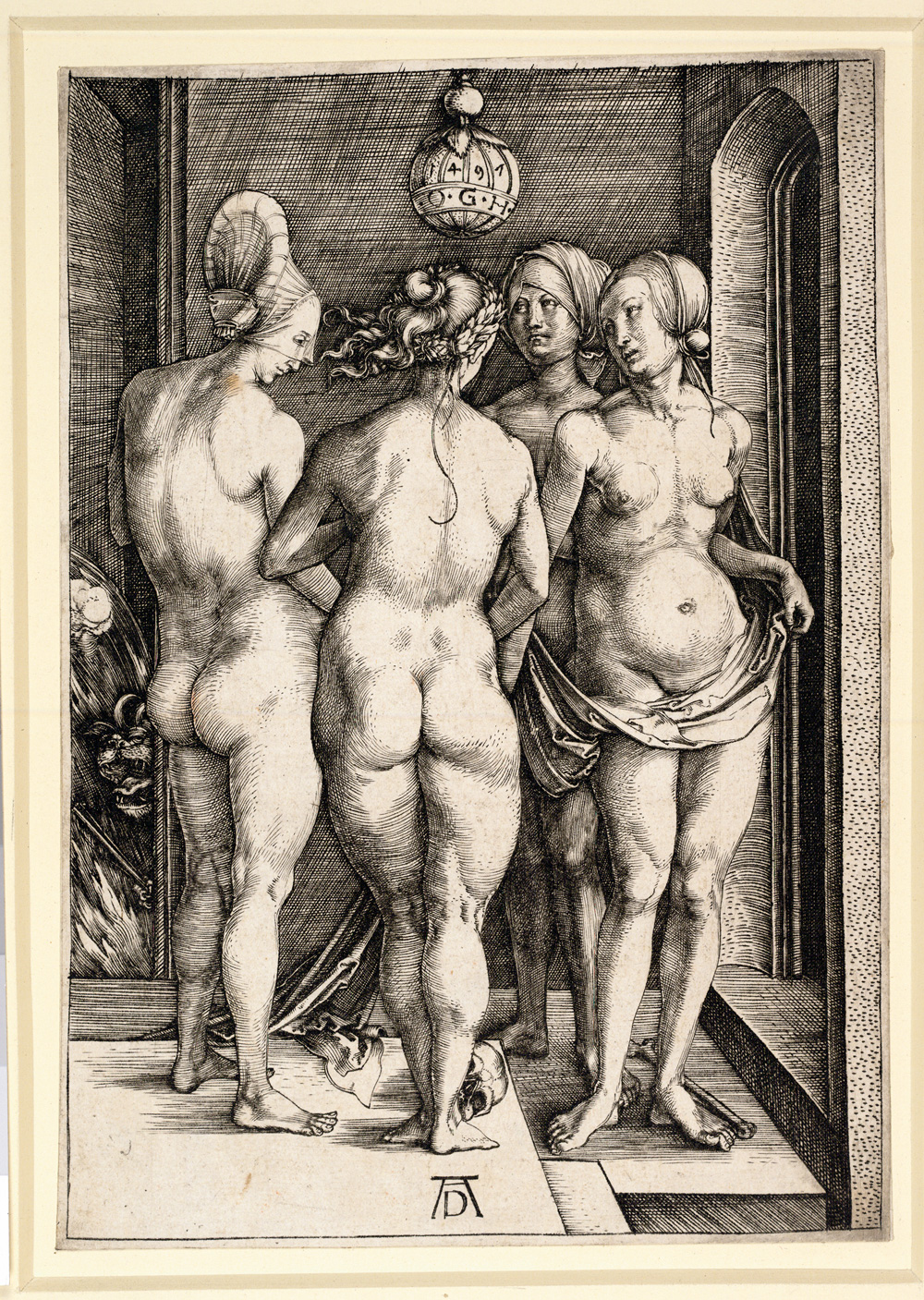 Dürer's interest in depicting nude women—the subject of a significant portion of his drawn and printed imagery—is a novelty in early modern art history. His first dated copperplate engraving shows an unprecedented gathering of nude women without any evident theme. Attempts to identify this scene with any known historical or contemporary iconography have failed, and the presence of a demon in hellfire at left and a skull and bone on the floor seems to support the seventeenth-century interpretation of these women as witches. Most striking, however, is the variety of body types and postures, suggesting a connection to Dürer's many studies of the female form from life. 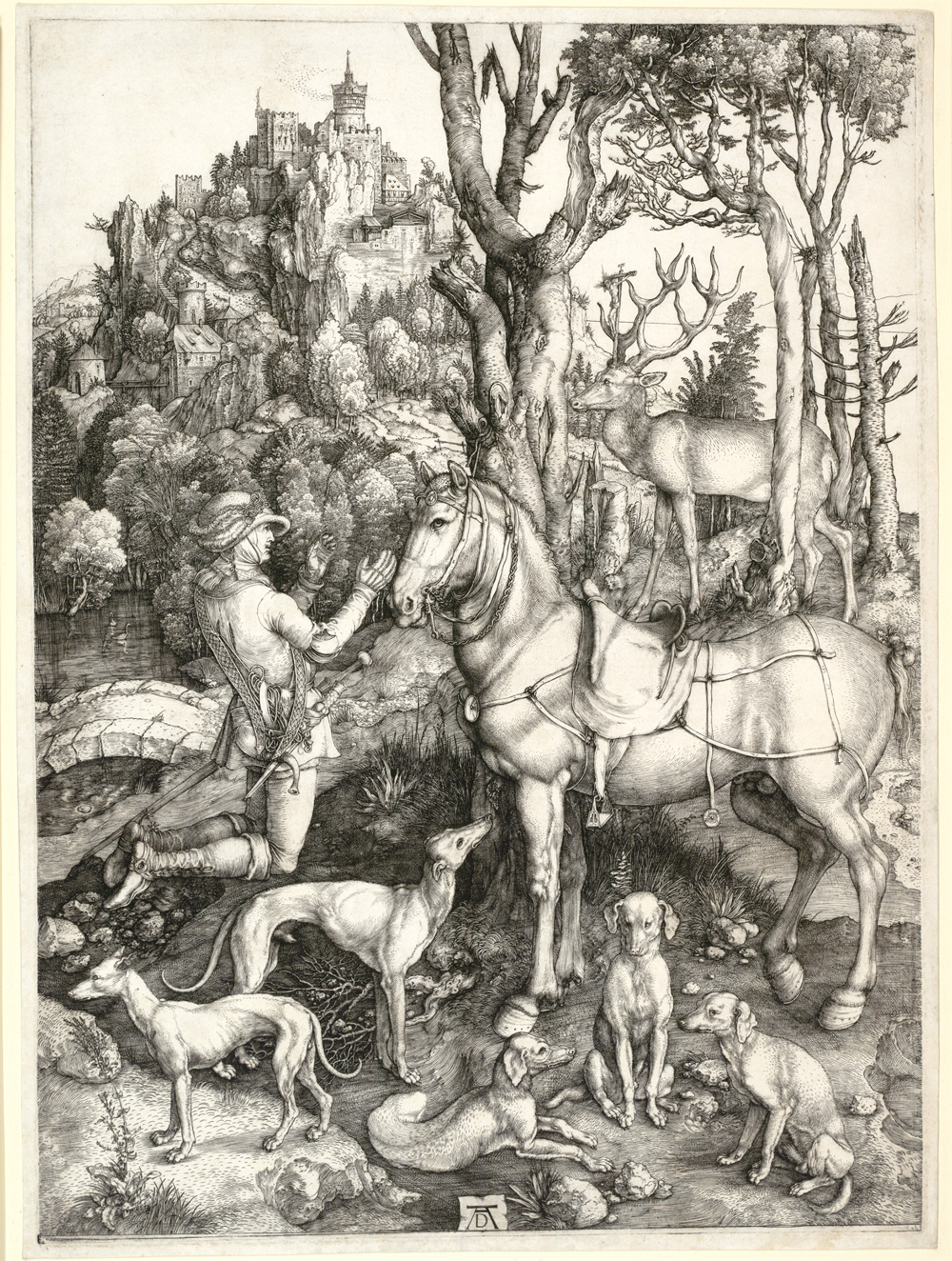 The largest of Dürer's engravings depicts Placidus, a Roman military commander who was moved to conversion by the appearance of a stag with a cross between its antlers. He later took the name Eustace (the Steadfast) and became a popular patron saint of hunters. The spiritual intensity of the moment of conversion is translated into a dizzying display of engraved detail that imparts a crystalline stillness on the human and animal figures. The worship of Christ is expressed in the glorification of nature. 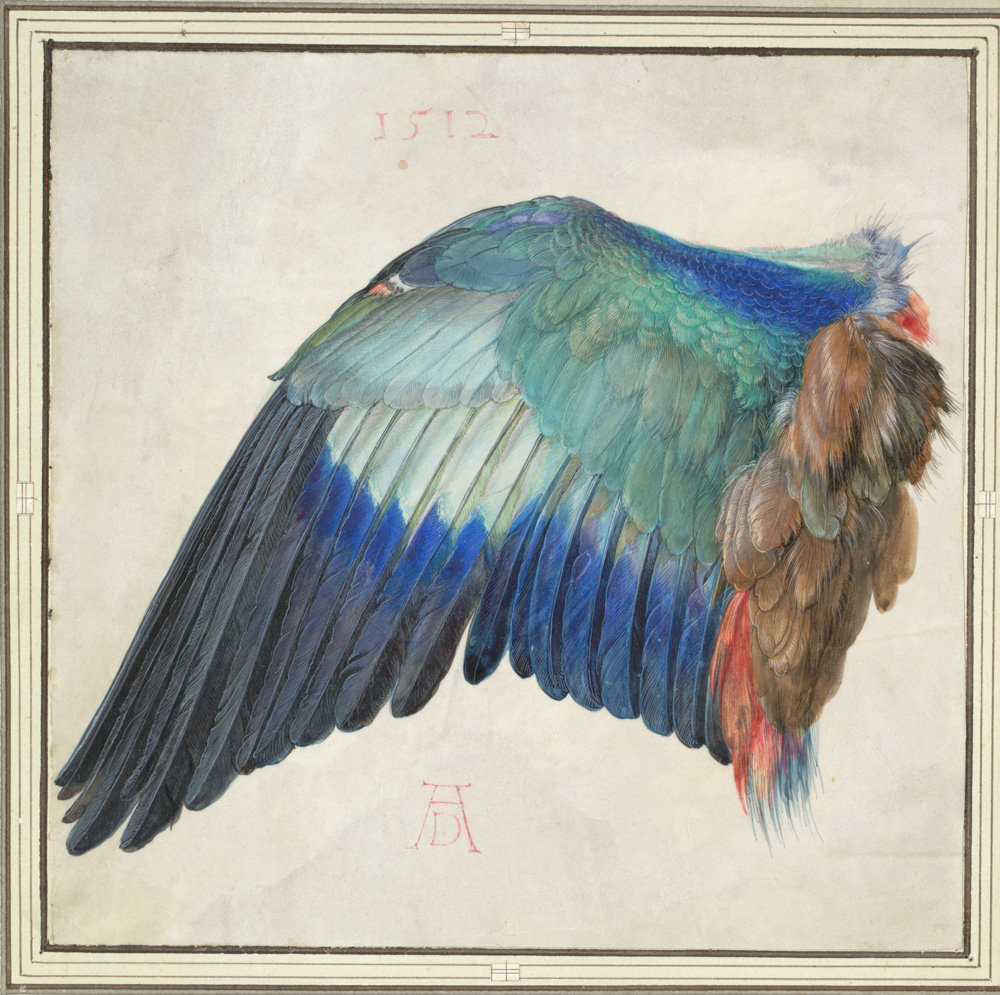 This hyperfocused examination of the bird's wing represents a masterpiece of pictorial staging that captures every nuance of color and detail of form. In his Four Books on Human Proportion (1528), Dürer elaborated on the veracity of nature; this example vibrantly illustrates how the depicted object becomes the work of art itself. Dürer's studies of animals were so impressive that they inspired other artists to replicate them or make variations of similar subjects, such as  Hans Hoffmann's copy (Dian Woodner Collection, Intended Gift to the National Gallery of Art). 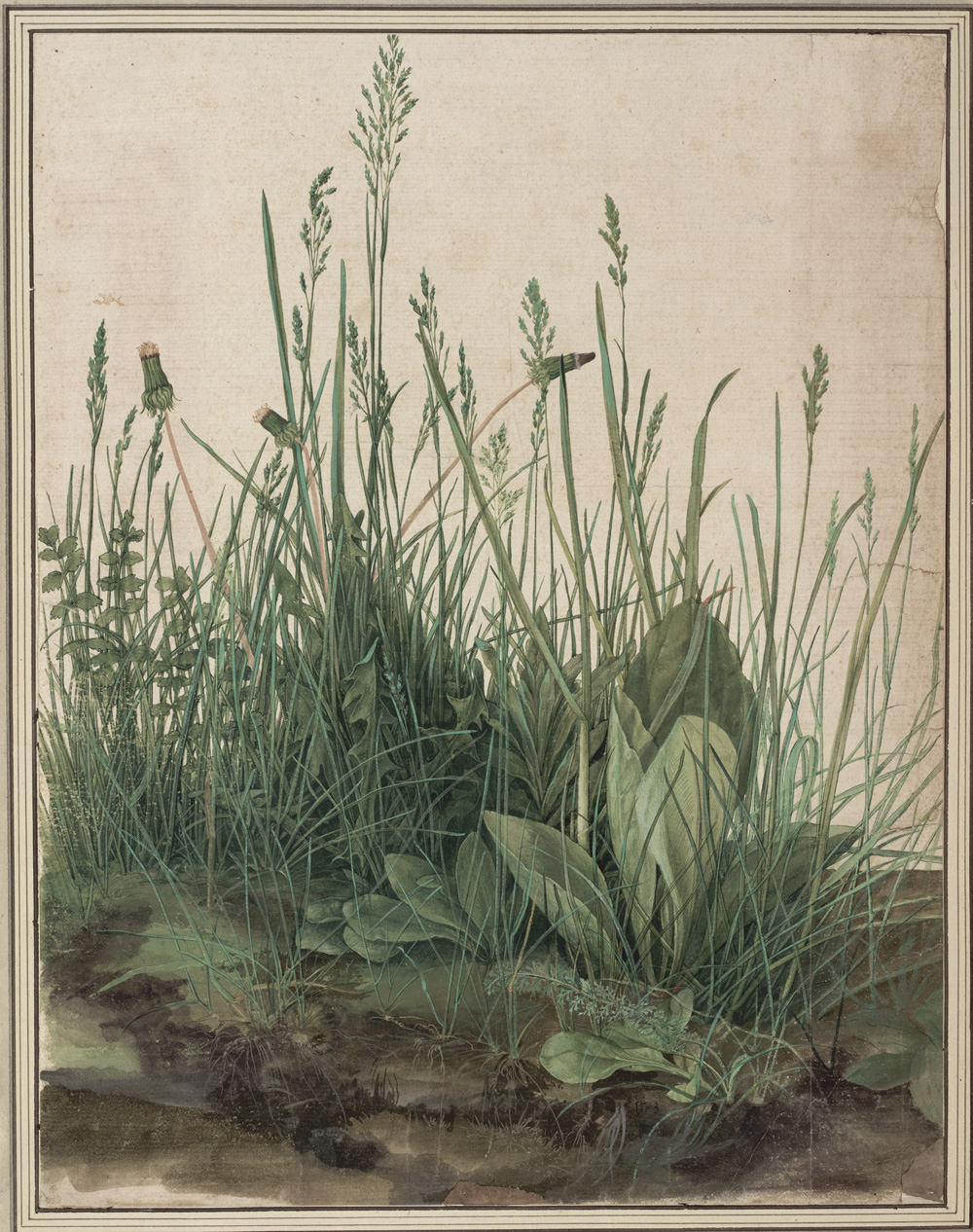 In one of Dürer's most famous nature studies, he invites the viewer to examine a patch of meadow from the perspective of a small animal. Despite the likelihood that the scene was drawn in the artist's studio from a number of separately studied plants, Dürer’s deft synthesis of the compositional elements—each plant working in concert to create a unified whole—results in an exceptionally naturalistic effect. This masterpiece of observation creates a vivid microcosm that blurs the line between artifice and nature. 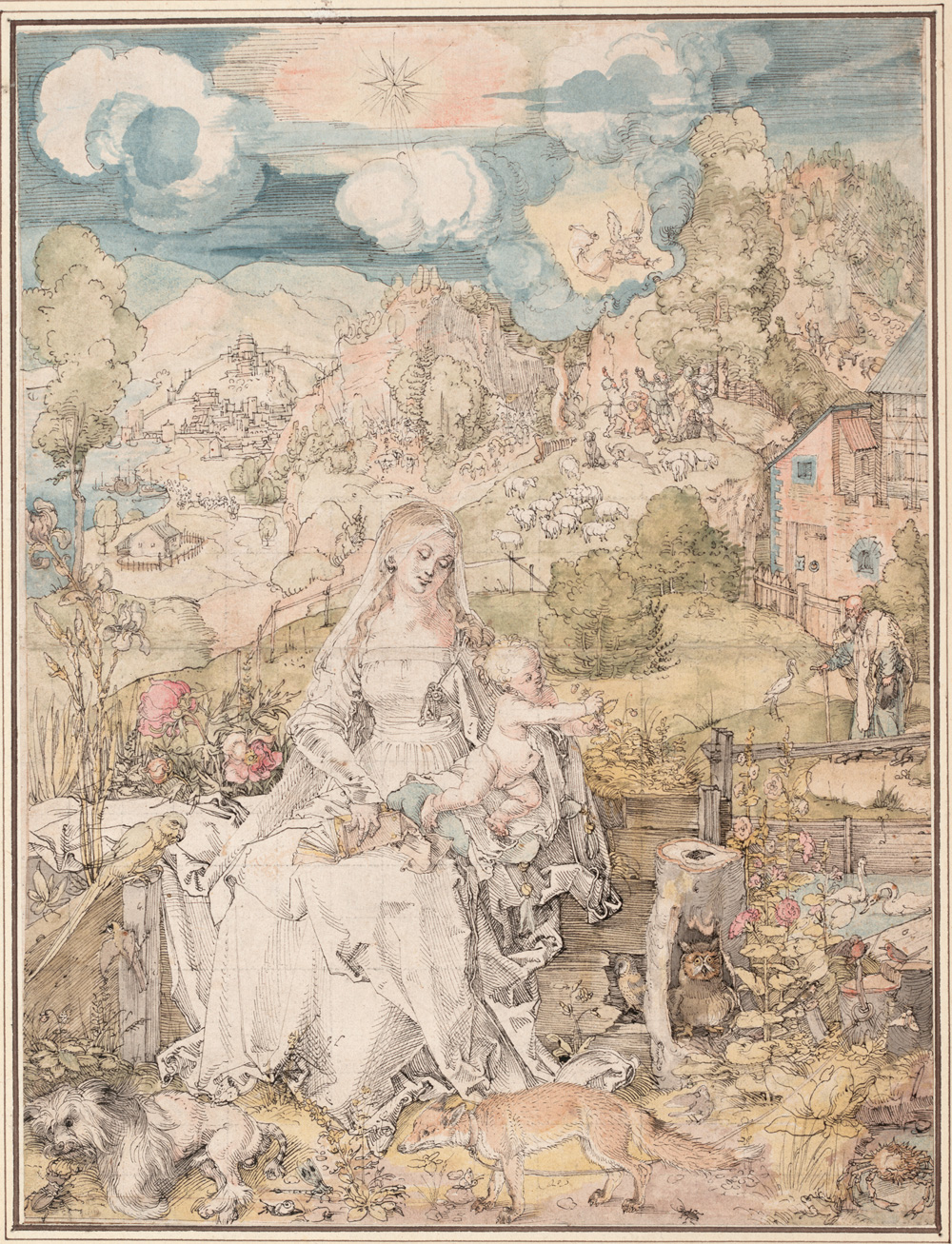 The devotional image of the Virgin and Child is set against an epic account of scenes in a panoramic landscape typical of Netherlandish art. Episodes from the story of Christ's Nativity unfold in minute detail in a setting that is depicted in a surprisingly realistic manner. Symbolically representing attributes associated with the Virgin and Child, the flora and fauna together express the divine power of creation and Christ's role as lord over the world. The original purpose of this drawing is unknown, although the presence of lightly applied chalk squaring lines suggests that it was intended to be translated into another medium, possibly by a later copyist. 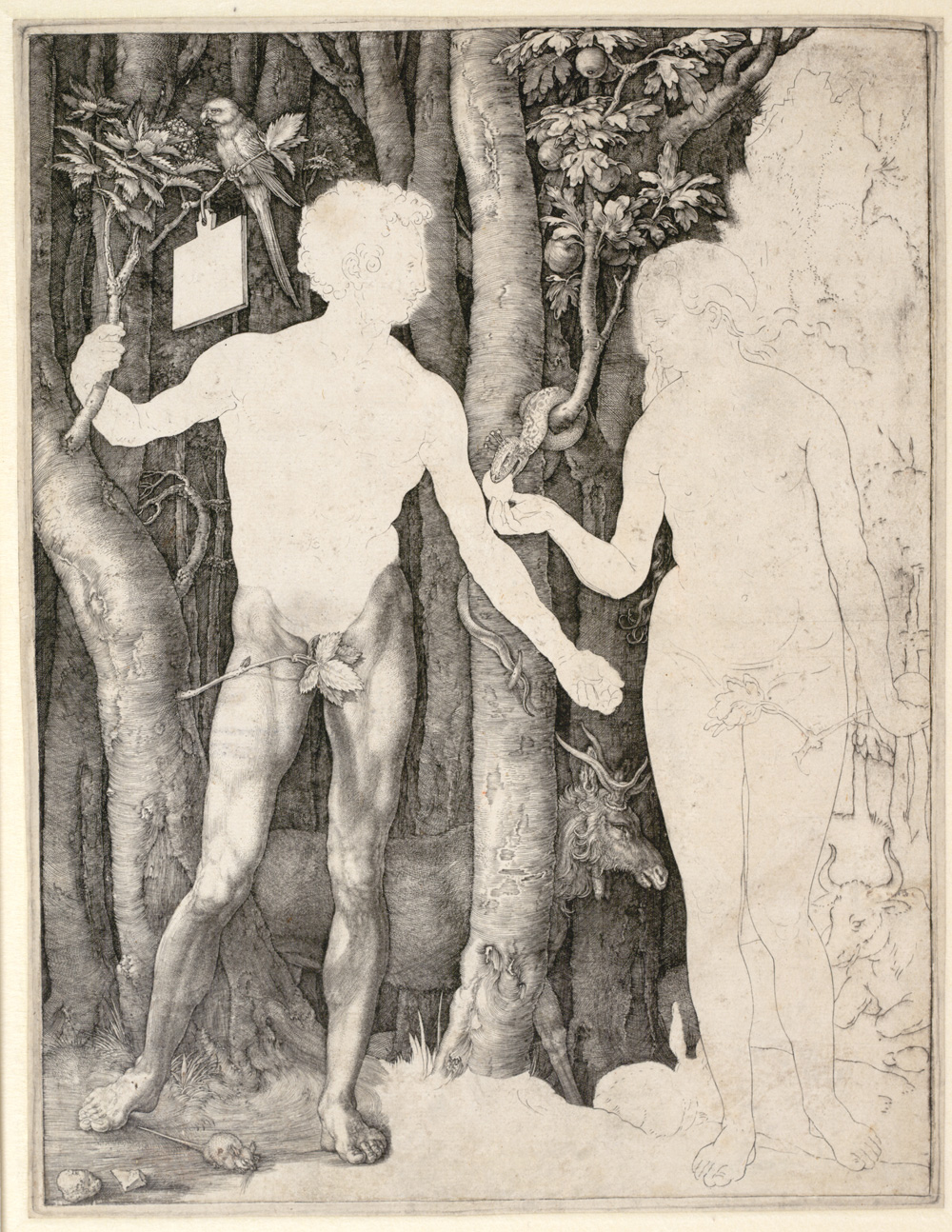 This print represents the culmination of Dürer's abiding interest in the construction of the human body according to a formula or canon. Adam's body is based on the Apollo Belvedere, an antique sculpture that had been excavated and accessible since the 1490s, whereas Eve's body seems to be the result of the artist's ongoing attempts to shape his observations of the female body from life into an ideal form. This second stage in Dürer's process of engraving the copperplate shows that he worked the composition section by section, bringing each part up to an astounding level of detail. 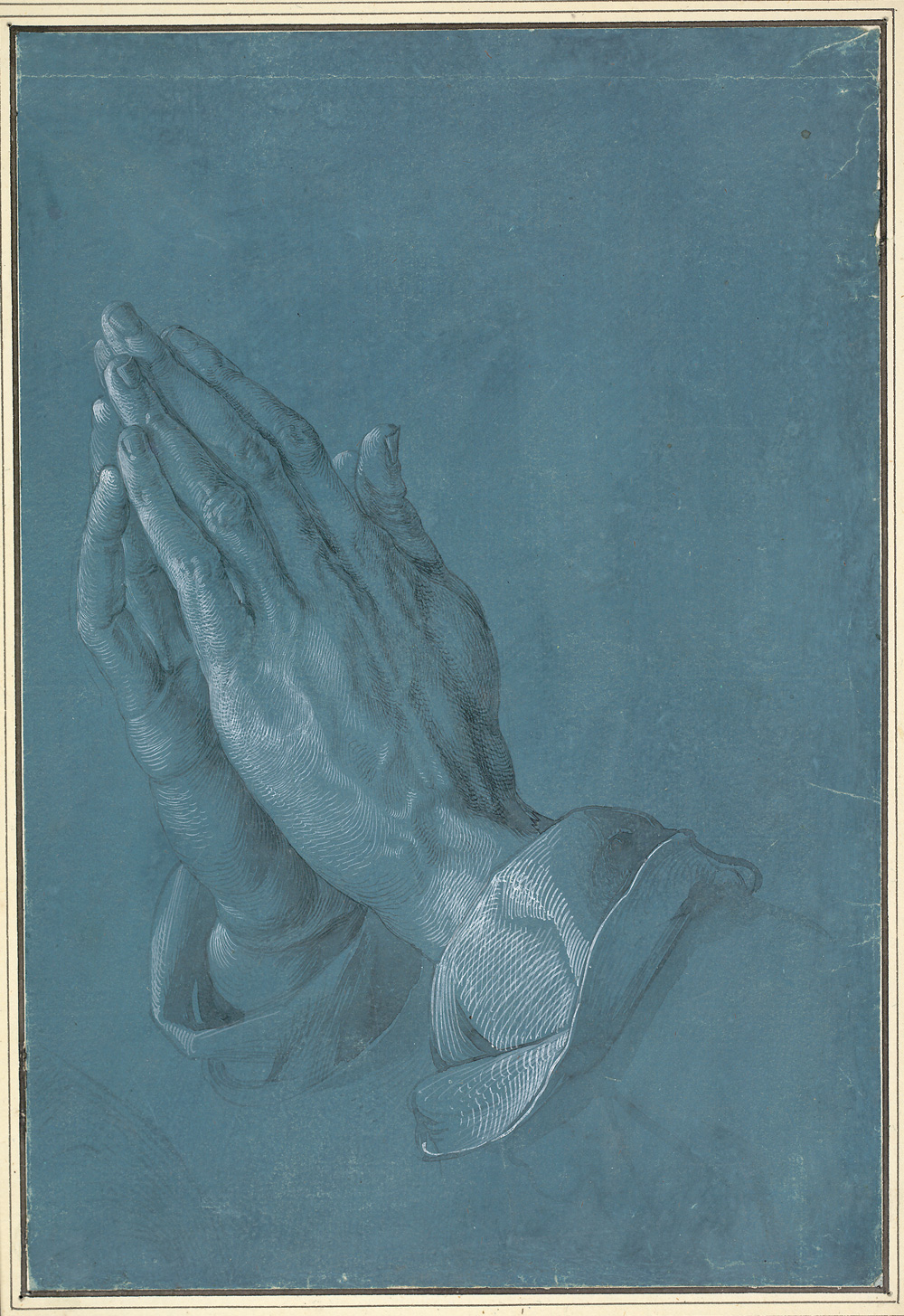 As part of a group of studies Dürer made in preparation for The Heller Altarpiece (destroyed in 1729), these hands were once on the same sheet as a study of an apostle's head. Using a network of finely applied brushstrokes, Dürer outlined the contours and then filled in the darkest areas with gray wash and the lighter areas with opaque white. The precise rendering of the hand's topography imbues the form with an exceptional degree of expressive value and creates a sophisticated realism that has led to universal admiration for this drawing. 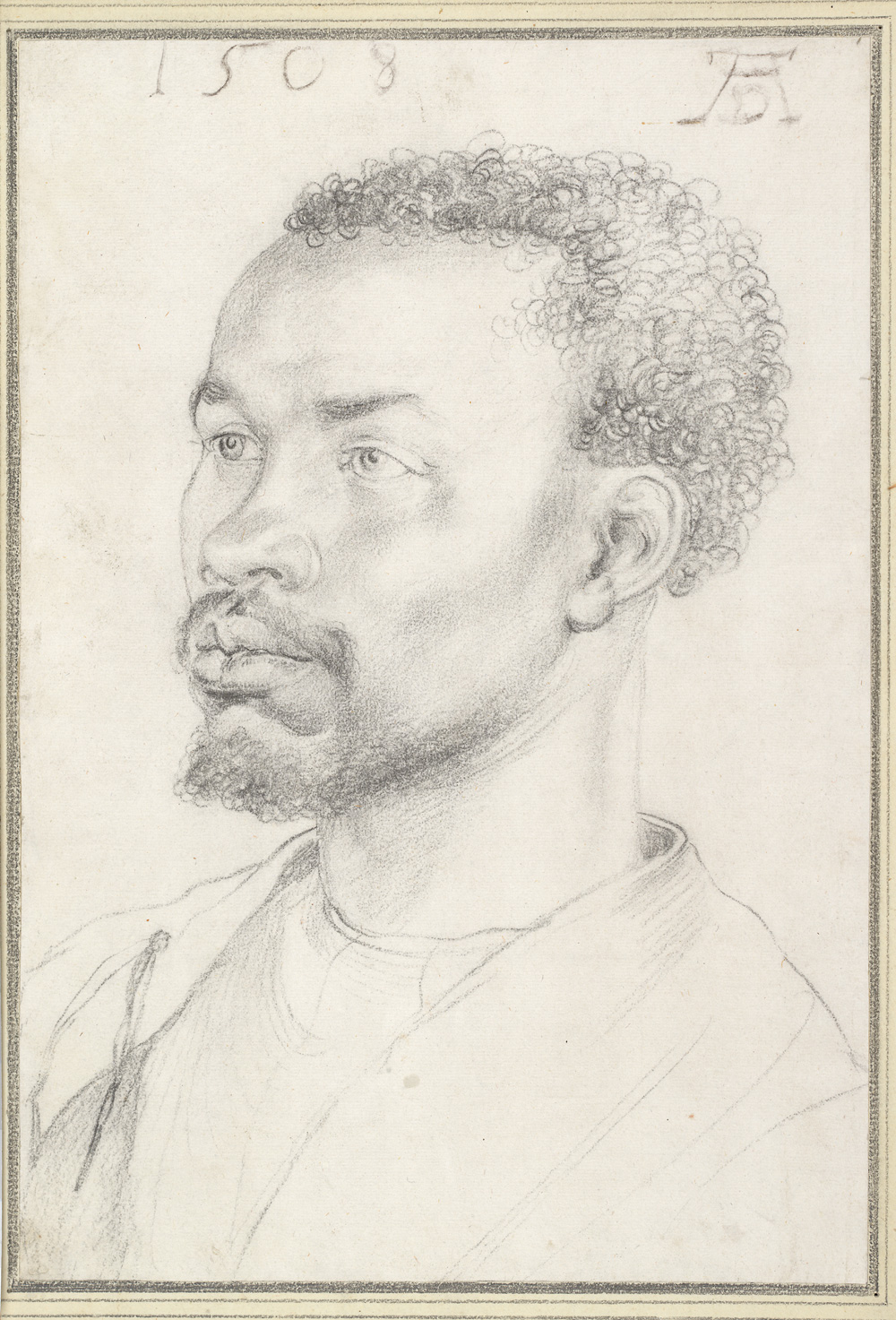 Where Dürer met this man is not known: he may have encountered this subject in a major port city such as Venice or even in the imperial city of Nuremberg, where this African may have been a member of a visiting entourage. His serious expression is depicted with extraordinary sensitivity and skill. Dürer's exploitation of the soft, finely grained structure of the chalk in contrast with the white reserve of the paper is evident in his masterful rendering of the way light falls on the man's face and hair. 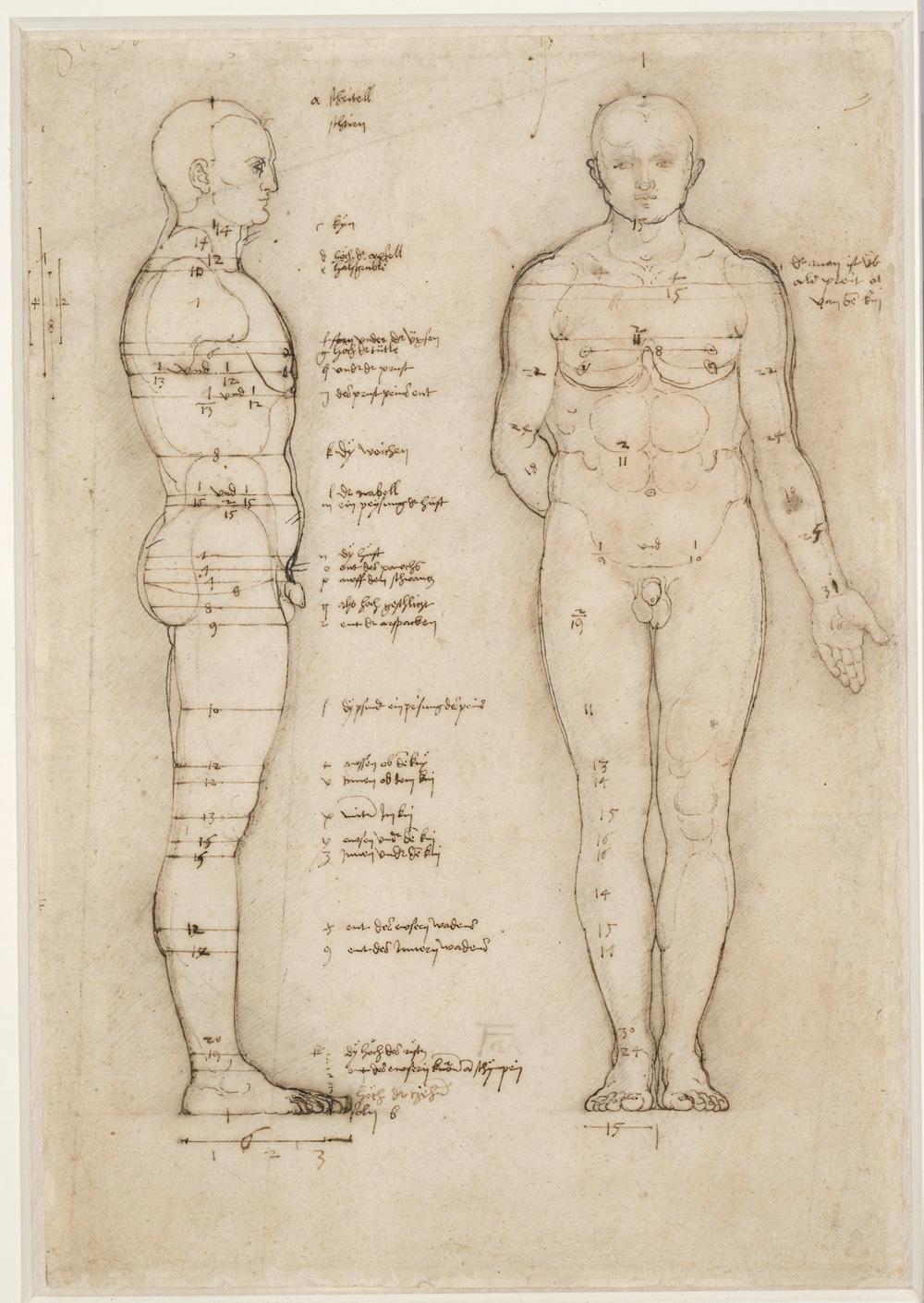 Around 1512/1513, Dürer decided to issue a scientific treatise on human proportion, a subject that had long held his interest and informed his portrayal of the human body. This drawing, which served as the model for an illustration in his published book, shows a male figure measured and annotated according to a system, derived from the ancient engineer and architect Vitruvius, in which body parts are drawn in proportional relationship to one another.

Dürer referred to this engraving as "Der Reuther" (The Horseman) in the diary of his trip to the Netherlands in the early 1520s, but efforts to identify the scene depicted here as a religious or moralizing allegory have continued since the second half of the sixteenth century. Today it is commonly understood as a representation of a Christian knight traversing a perilous landscape populated by the decaying figure of death, who holds an hourglass, and a demonic animal representing the devil at the horse's hindquarters. 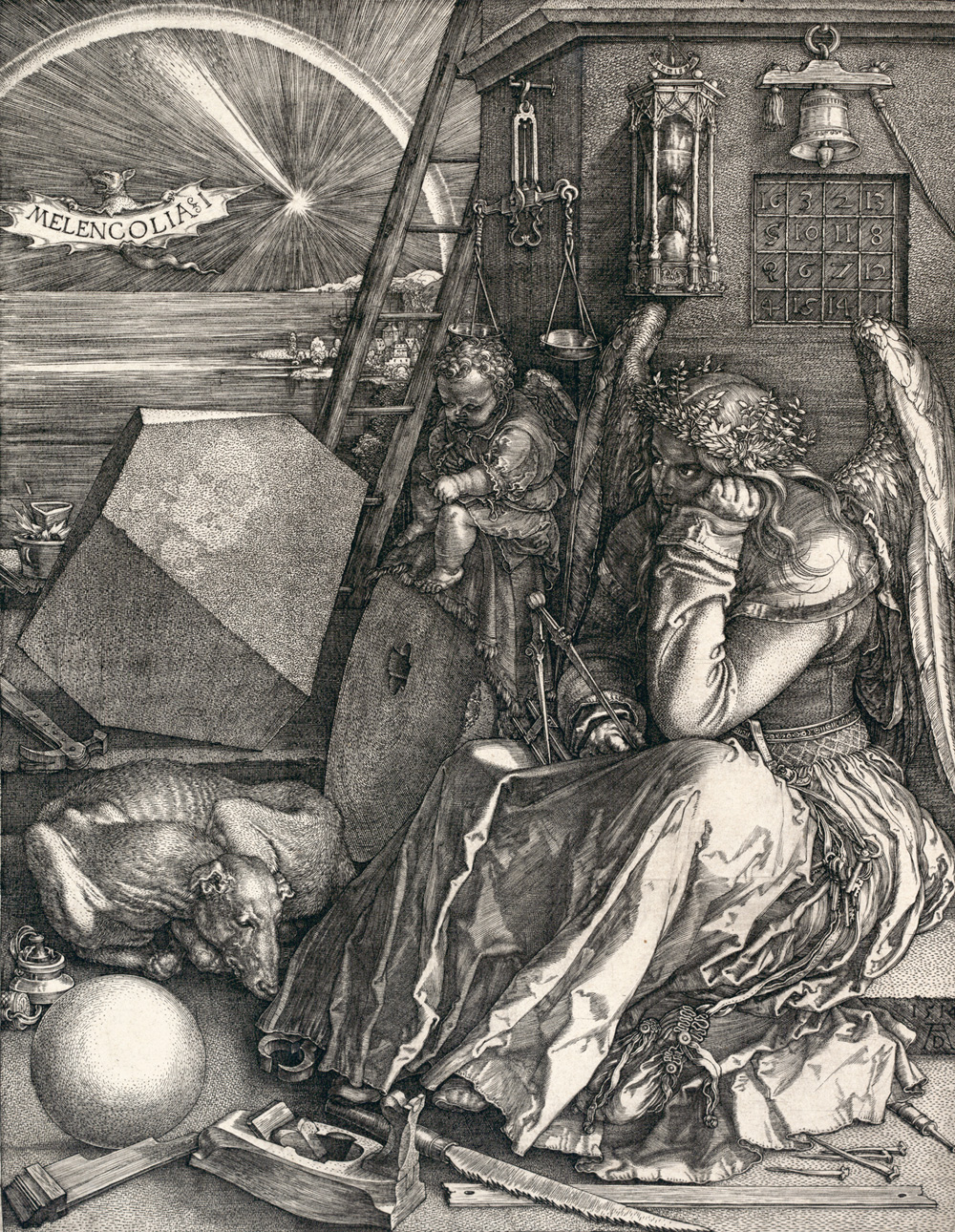 One of Dürer's most famous images, this engraving depicts a winged female figure resting her head in her hand, a posture associated with melancholy and mourning since antiquity. The fact that the artist created this engraving following his mother's death reinforces a mournful interpretation of the figure, who is surrounded by a variety of tools and implements but seems unable to use them.

Conceived by the artist while he was working for Holy Roman Emperor Maximilian I, this elaborately colored drawing shows the emperor seated under a curved baldachin on a sumptuous carriage drawn by horses and numerous figures personifying the virtues of the ruler. Justice, Strength, Wisdom, and Temperance hold linked laurel wreaths above Maximilian I, while winged Victory stands behind him. 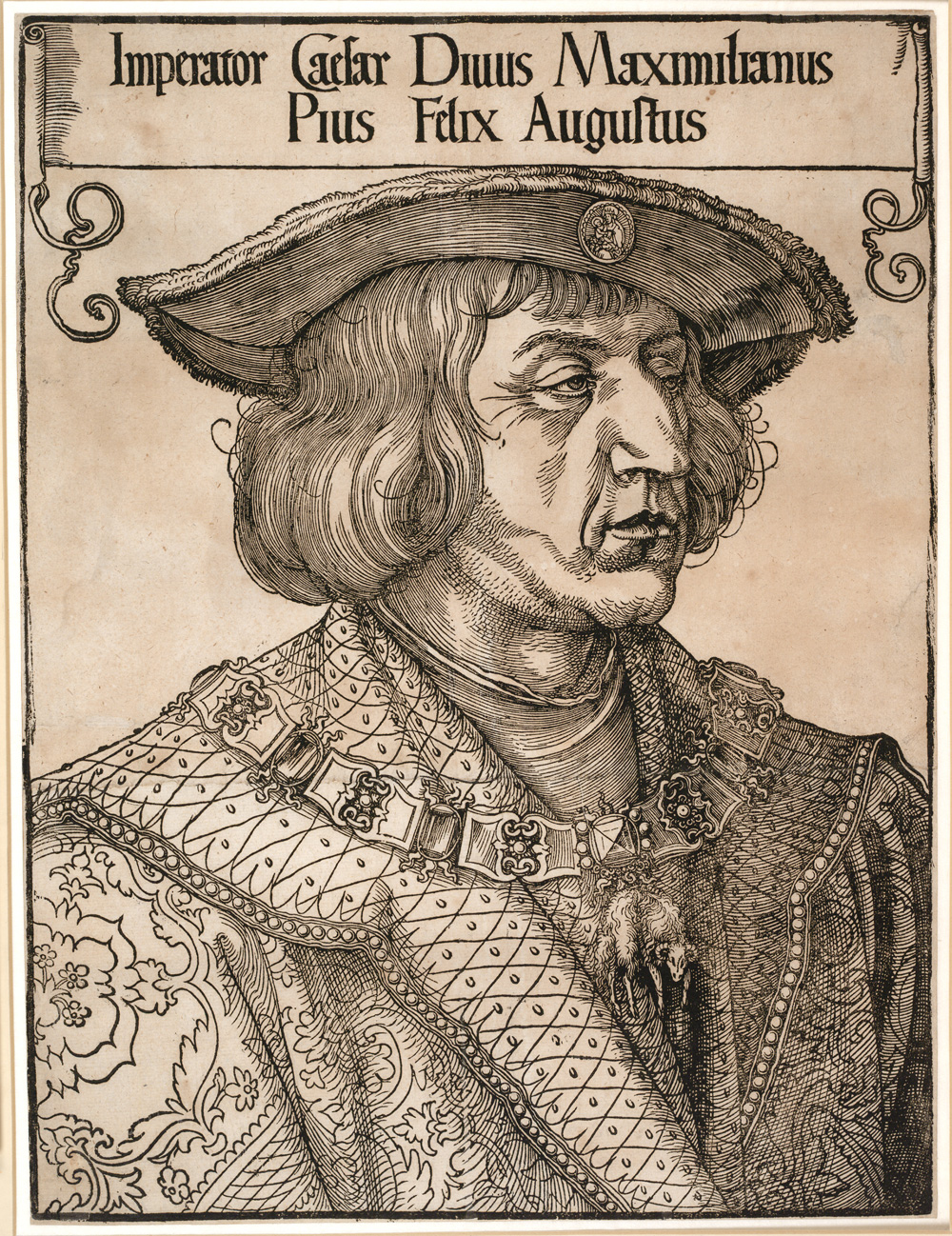 During the imperial diet (formal assembly) in Augsburg in 1518, Dürer accompanied the delegation from Nuremberg and drew the likeness of the Holy Roman emperor. That drawing served as a model for two painted portraits as well as this woodcut, which portrays Maximilian I wearing the collar of the Golden Fleece, a prestigious chivalric order. Published in the year of the emperor's death, the print disseminated the image of the deceased ruler. 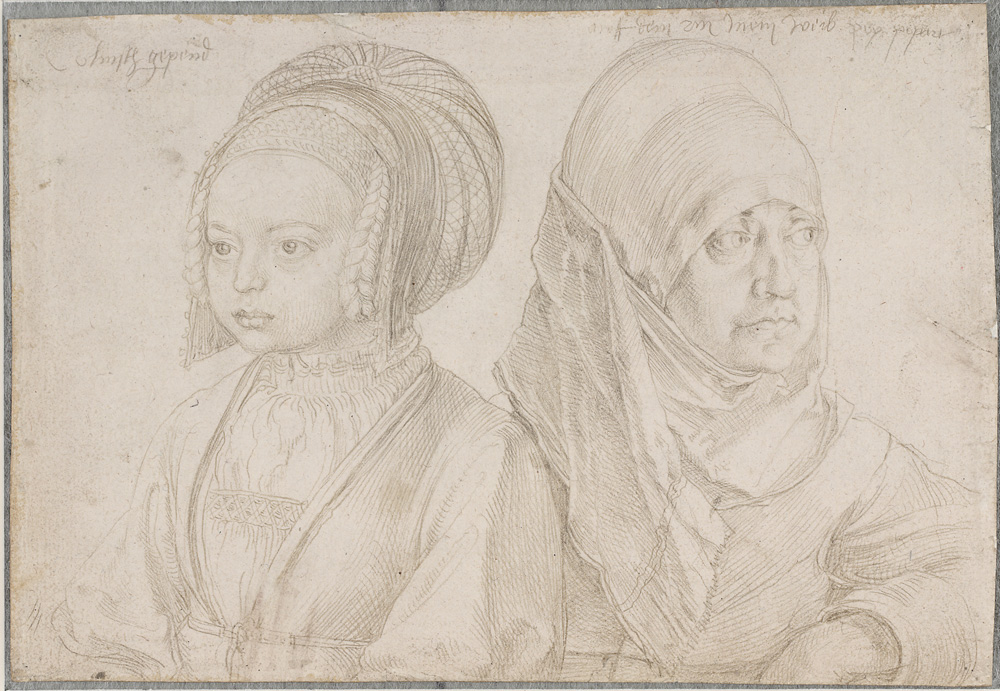 While traveling in the Netherlands in 1520 and 1521, Dürer carried a pocket-sized sketchbook in which he drew studies from life. This page from the sketchbook shows a portrait of a girl from Cologne, possibly the daughter of a cousin with whom he stayed. Details of local women's dress always fascinated Dürer, and here he shows her wearing a festive bonnet called a Stickelchen, a typical headdress from Cologne. The portrait of the artist's wife was added at a later date, as the inscription above her head indicates. Dürer quite likely paired the two to emphasize the contrast in their ages, creating essentially a vanitas image that illustrates the inevitability of the passing of time.