An Antiquity of Imagination 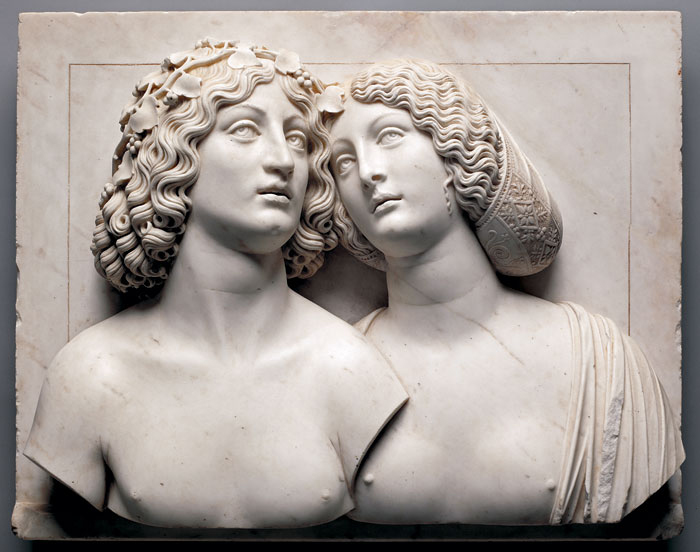 In Renaissance Venice, where sculptors were employed chiefly to decorate churches and public buildings, Tullio Lombardo (c. 1455 – 1532) went beyond this tradition to create new forms of private, modern art. For a sculptor in late fifteenth-century Venice, to be modern meant to breathe new life into the lost world of classical antiquity, glimpsed through literature and fragmentary ancient remains and envisioned as a wondrous place of ideal beauty. Tullio’s sculpture summoned up an antiquity of imagination, with works of a kind never seen before: busts in high relief portraying figures based on Greek and Roman models, but given contemporary (fifteenth-century) hairstyles and costumes.

Tullio and his younger brother Antonio worked with their father Pietro Lombardo in the family firm, a leading force in architecture and sculpture in Renaissance Venice. Their prestigious commissions included tombs for doges, the ceremonial heads of the Venetian state. Tullio apparently designed one of the greatest such monuments, begun about 1489, for Doge Andrea Vendramin. Its triumphal arch is adorned with relief sculpture and statues including warriors in Roman armor. Their faces convey a mood of romantic melancholy that became essential to Tullio’s antiquarian style.

A combination of sensuous beauty and mysterious expression also distinguishes Tullio’s relief busts. Parted lips and restless, preoccupied gazes — with intricately carved, wide-open eyes — suggest anxiety or yearning for something out of reach, like the ancient world itself. His figures seem physically present yet spiritually distant.

This exhibition brings several of Tullio’s relief sculptures together with related works from his circle, including expressive busts, sacred sculpture, and small, single figure reliefs.

The exhibition is sponsored by The Exhibition Circle of the National Gallery of Art. 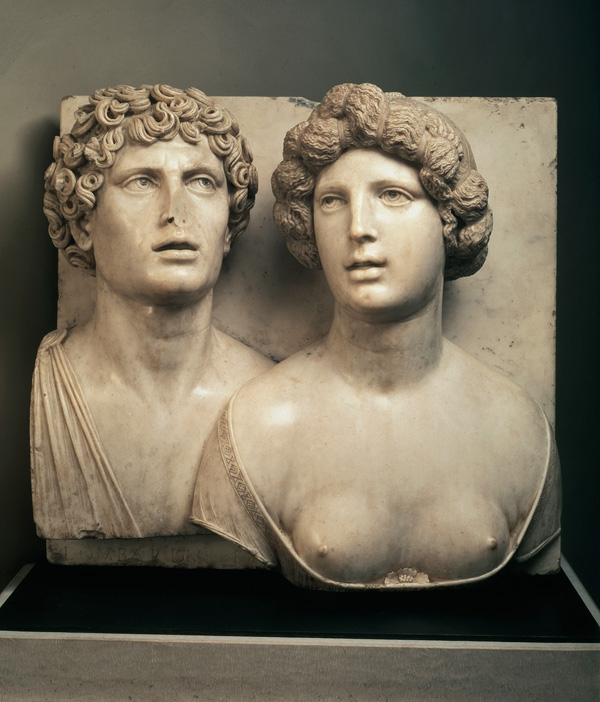 Carved from a single block of marble in high relief, this double portrait is so deeply undercut that the two figures appear almost in the round. Traces of applied color survive on the eyes, the lips, and the background, which was once black. The intense emotions of the pair, who do not look at each other, remain a mystery. Was this work a memorial, emulating Roman funerary reliefs of married couples? An ancient love story, perhaps with a tragic conclusion? A pair of idealized contemporary portraits in antique guise? At a time when even formal portrait busts were rare in Venice, this ambiguity may have been part of Tullio’s appeal. The prominent signature was inscribed at a point perhaps meant to be at the viewer’s eye level.

In comparison to Tullio’s earlier double portrait (A Couple) the couple here seem calmer and more united, with each other and with the background. The woman leans dreamily against her consort, but her rippling hair seems to swell with energy against the brocaded headdress that binds it. The garland of vine leaves in the man’s hair suggests that he is the ancient wine god Bacchus with his bride Ariadne, or perhaps an ivy-crowned poet with his beloved. The frame-like border around the figures may indicate that Tullio was competing not only with ancient sculpture, but also with contemporary painters. 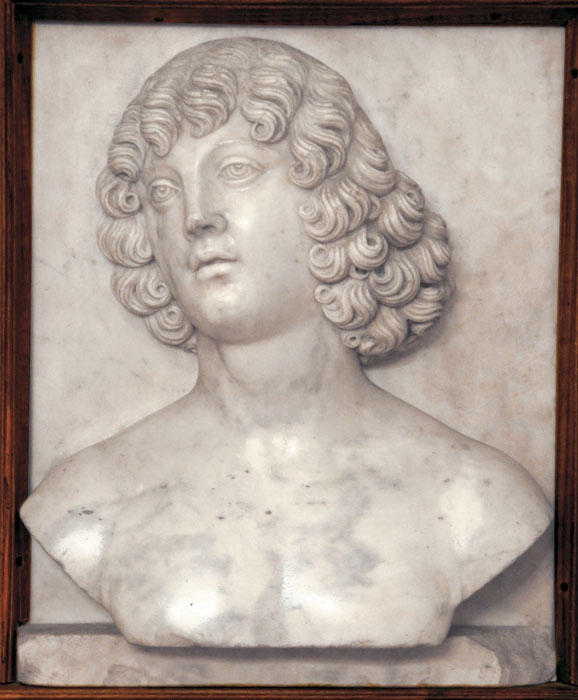 Carved in remarkably high relief, this youth appears as both a living presence and a bust set above a narrow shelf. His bare torso evokes the ideal nudes of classical antiquity, but his hairstyle is fifteenth-century Venetian. Is he a portrait, an ancient hero, or a saint? A lovelorn youth or an ideal beloved? As with Tullio’s other relief busts, the figure’s identity is mysterious. 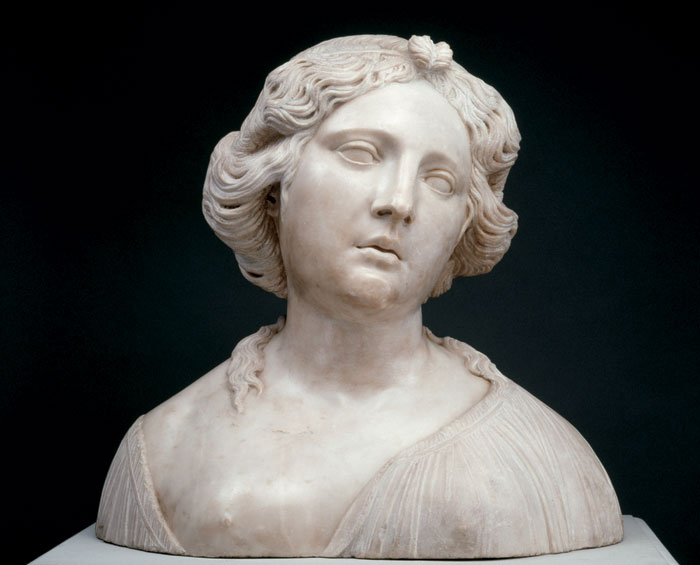 The figure’s swirling hair, tilted head, and yearning expression reveal Simone Bianco’s debt to the type of figure introduced by Tullio’s relief busts. Her open camicia (shirt or chemise) is a garment that, in Renaissance art, often stood in for ancient drapery. Instead of representing a specific individual, the bust may portray an ideal beauty, a subject that Renaissance artists and poets alike aspired to master as a way to display their virtuosity and to captivate their audience. 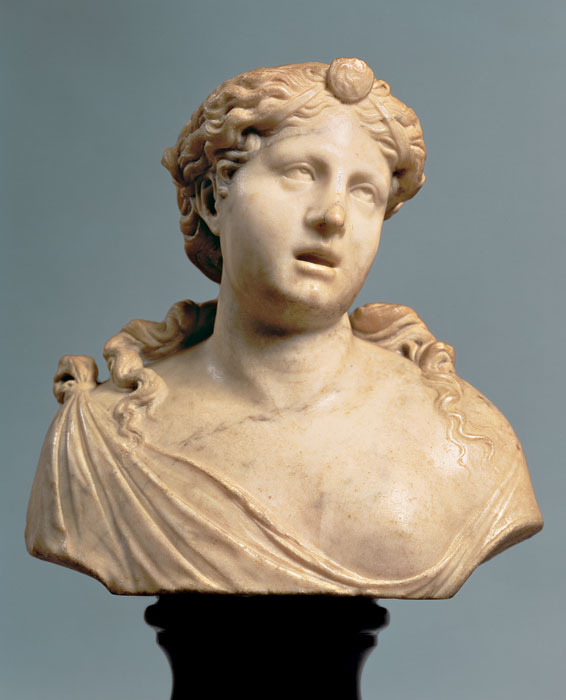 The sculptor’s admiration for Tullio is suggested by the tragic expression, seminude treatment, and intricately winding hair, which is raised in relief in some places and incised into the marble in others. The medallion above her forehead is based on a famous ancient gem. The Trojan hero Aeneas is among the identities proposed for the seated figure in Minello’s version. If it is he, the woman would be his grief-stricken lover Dido, queen of Carthage, whom he abandoned. 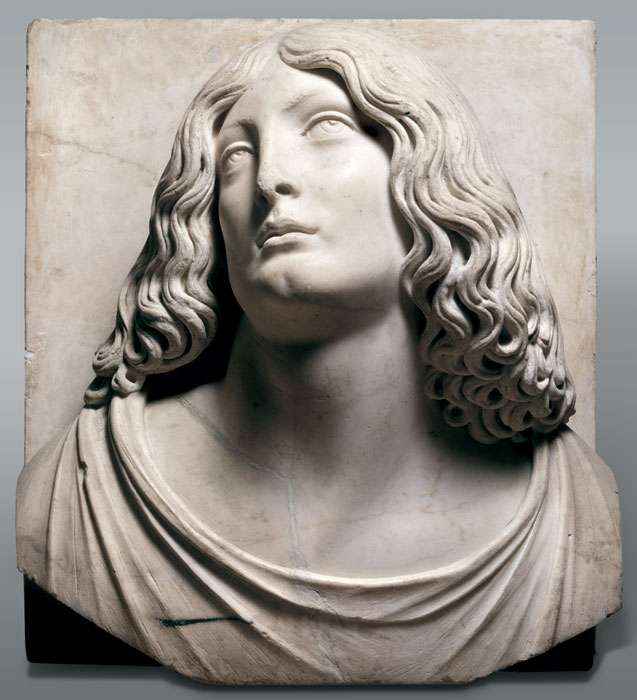 This head was perhaps once part of a statue in high relief, cut away from a now-destroyed altarpiece or tomb. The face and hair recall Tullio’s "Bacchus." Here, however, the contrast between deeply drilled lower curls and the relatively schematic treatment of hair atop the head suggests a work designed to be seen from below; viewers, in looking up, would then emulate the figure’s gaze toward heaven. 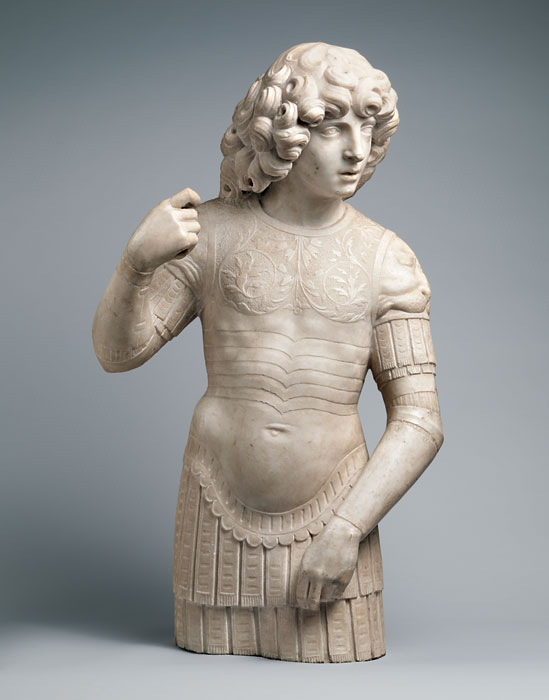 This statuette, which once held a spear, probably portrays a warrior saint, perhaps Saint George or Theodore. It may have been made for a public monument. Typical of Tullio and his workshop are the classically regular facial features, the parted lips, and the eyes carved to suggest an individual lost in reverie. The costume is based on ancient Roman armor, but with Renaissance elements such as the lion masks at the shoulders. The saint’s luxuriant curls and the delicate pleated shirt visible at the elbows are contemporary Venetian in style. 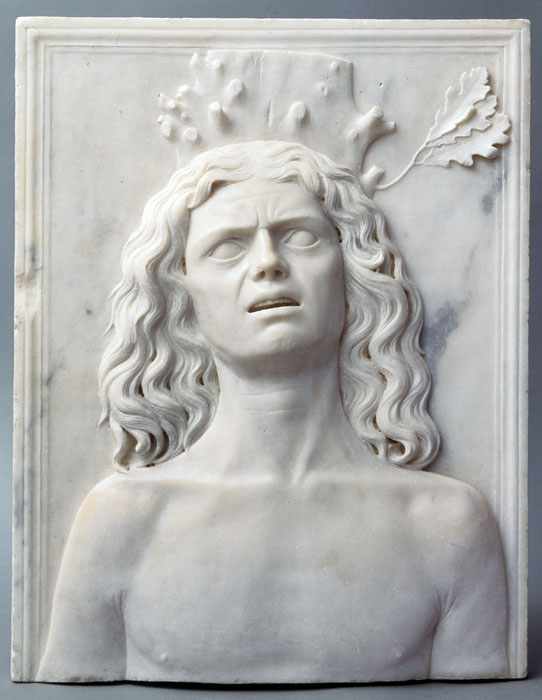 Placed against a bare oak tree (identified by the single spray of leaves), with the usual arrows of his martyrdom absent, Saint Sebastian is presented in the manner of a religious icon, close-up and frontal. Although he resembles the sorrowful figures in Tullio’s relief busts, he differs from them in the detailed naturalism of his lined face and body, and in his overtly anguished expression. In the 1520s, late in his career, Tullio and his workshop explored similar emotional extremes.

Angels in Venetian art are often portrayed without wings. Like Tullio Lombardo, the sculptor of this figure seems to have studied the clinging, form-defining drapery found in much ancient sculpture. The bunched and crumpled textures of his cloth are more naturalistic than Tullio’s, and the facial features, with sharp nose and pointed receding chin, are less classically idealized. The faraway gaze, however, and the tight coils of rhythmically arranged hair suggest an appreciation for Tullio’s approach. 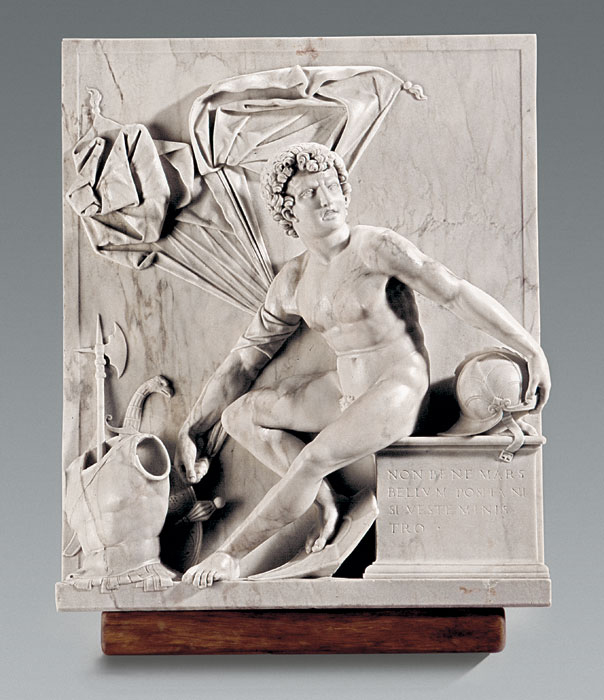 This deeply undercut high relief reflects a type of small sculpture developed by Tullio Lombardo’s younger brother Antonio for the luxurious private chambers of the Duke of Ferrara. Reliefs like this one, with single figures based on ancient myth, history, or philosophy, soon gained popularity among collectors. Here, the ancient Roman god of war, full of an energy echoed by his windblown drapery, appears amid his divested armor. Some believe this relief was made to be paired with a marble version of the bronze Peace. Others argue that the inscription refers to Mars’ amorous exploits and that a more likely pendant would be Venus, the goddess of love.

Seated on an empty cuirass (armor that protected the torso), the allegorical figure of Peace extends her wand to pacify two fighting serpents. Her graceful gesture creates the serpent-twined staff called the caduceus, an attribute of figures symbolizing Peace on ancient Roman coins. This bronze relief is a unique cast derived from a lost model, probably of clay, that was apparently conceived for replication in marble, similar to Mars. 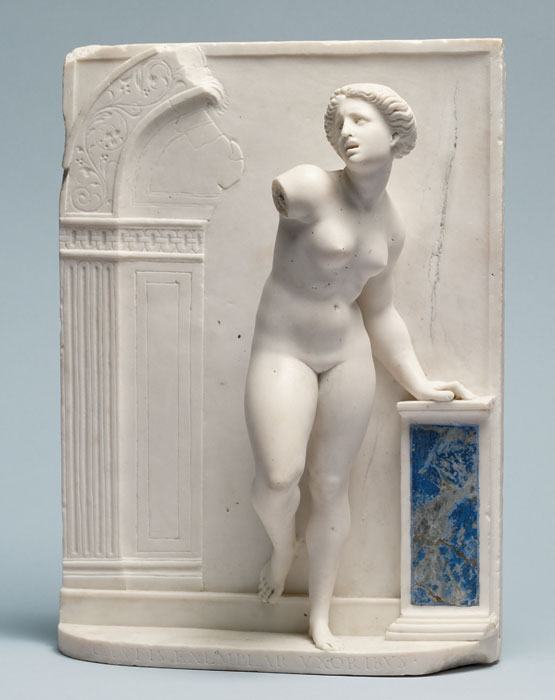 Lucretia, an ancient Roman matron, chose to commit suicide rather than live dishonored after her rape by Tarquin, son of the king. The story of this virtuous wife was a favorite theme in Renaissance art: Her beauty appealed to male viewers and her sacrifice to chastity was held up as a model for women. The crumbling arch in the background echoes Lucretia’s sense of tragically injured honor.