Carleton Watkins: The Art of Perception 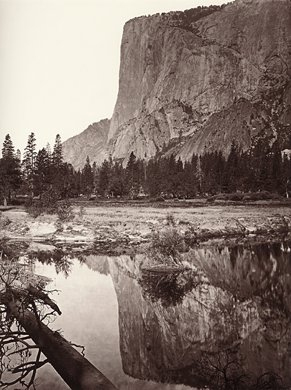 As specimens of the photographic art they are unequaled. The views are...indescribably unique and beautiful. Nothing in the way of landscapes can be more impressive.

Carleton Watkins (1829-1916), the creator of the striking photographs of the remote Yosemite Valley that so inspired the New York Times critic, had moved to California around 1851 from the small New York town of Oneonta. One of many young men drawn to the West during the Gold Rush, he first worked in Sacramento as a teamster and carpenter for a dry goods establishment. In 1853 he moved to San Francisco, where by chance he learned how to photograph when asked to stand in for an absent employee in a photography studio. He soon established his own business making photographs for land dispute cases and mining interests. Following his first photographic expedition to Yosemite in the summer of 1861, Watkins' reputation was securely established, and for the next two decades he created some of the finest American landscape photographs of the nineteenth century.

Watkins lived in San Francisco from 1853 to 1906, when he lost his studio in an earthquake. His photographs document the rapid growth of the city, at that time the biggest in the West, as well as the Bay Area communities that surround it. 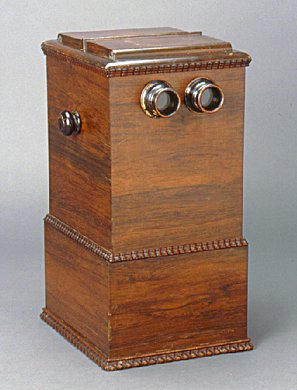 From the outset of his career, Watkins searched for ways to bring his subjects alive to those unable to experience them firsthand. He often used a stereo camera that produced two near-identical images of the same scene, which, when viewed through a binocular viewer called a stereoscope, or a more elaborate stereo cabinet, created an illusion of startling three-dimensional depth.

Hampered by the limited size of his traditional camera, Watkins asked a cabinetmaker in 1861 to build a huge camera for him capable of making negatives measuring 18 by 22 inches, called mammoth plates. With this instrument, Watkins was able to capture the enormous scale of the vast landcapes of the American West as well as intricate details. He transported this large, heavy camera, with tripod, glass plates, and a portable darkroom, to the most forbidding spots, and consistently returned with images of superb technical quality. 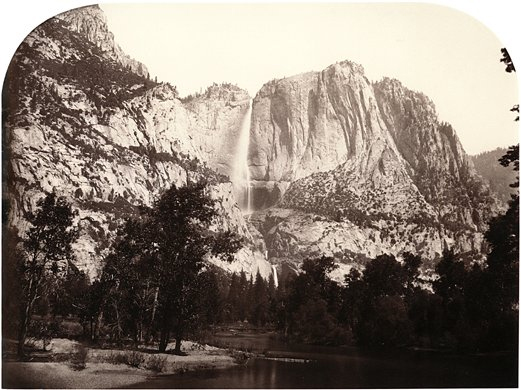 In the summer of 1861 Watkins first traveled to the remote Yosemite Valley and Mariposa Grove of Big Trees, two hundred miles east of San Francisco, to photograph their fabled wonders. With his stereo and mammoth plate cameras, he made photographs of the area's sublime views and distinctive geology.

Viewers around the country were entranced by Watkins' photographs. Ralph Waldo Emerson declared that his images of the massive sequoia, Grizzly Giant, "made the tree possible," for these photographs provided evidence of its existence. The landscape painter, Albert Bierstadt, saw Watkins' photographs at the Goupil Gallery in New York in 1862 and was inspired by them to visit the Yosemite Valley. Senator John Conness of California, who laid the foundations for the Yosemite Bill of 1864 to protect the area from development and commercial exploitation, also owned a set of Watkins' prints.

In 1864 and 1865, Watkins was hired by the geologists Josiah Whitney and William Brewer to make photographs of Yosemite for their California State Geological Survey. A new wide-angle lens and several new trails along the precipitous rim of the valley allowed him to make pictures of increasing complexity and daring. Watkins returned to Yosemite on several other occasions in the 1860s and 1870s. 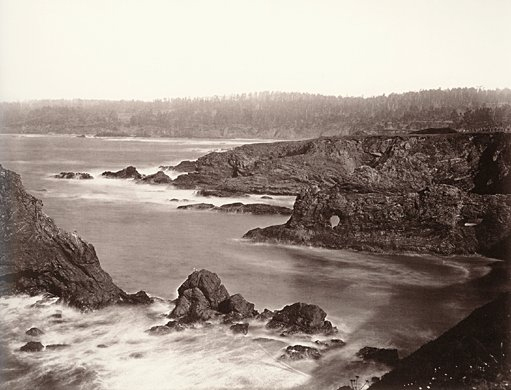 In 1863 Watkins visited the inaccessible northern California town of Mendocino to document its thriving lumber industry on behalf of its mill owners. In addition to making photographs of the burgeoning coastal community and its millhouses, he also focused on the area's citizenry, indigenous wildlife, and rugged coastal geology. Expressing a view held by many nineteenth-century Americans, Watkins depicted industry existing comfortably with nature. 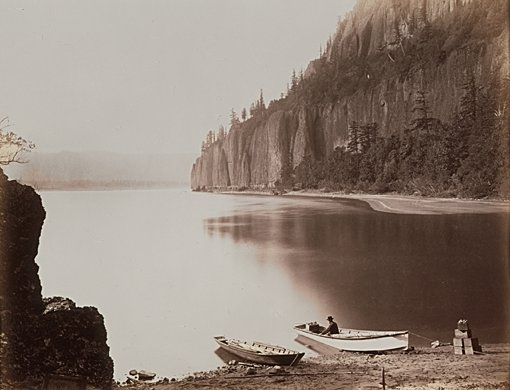 In spring 1867 Watkins opened his first public gallery and sent thirty of his mammoth prints to the Universal Exposition in Paris, where he was awarded a medal. Hired by the Oregon Steam Company, Watkins departed in July 1867 on an expedition up the Willamette and Columbia Rivers to photograph their scenic beauty as well as the company's railways, which ran along unnavigable stretches of the rivers. The breathtaking scenery of the Columbia Gorge, considered second only to that of Yosemite, provided Watkins with many fresh subjects for his new gallery. The Columbia River series, which consists of 60 large negatives and 136 stereographs taken along the route upriver to Cape Horn, represents a high point in Watkins' career. In addition to panoramas, he made photographs documenting subjects from different points of view in order to give viewers the sense that they too were traveling along the river. 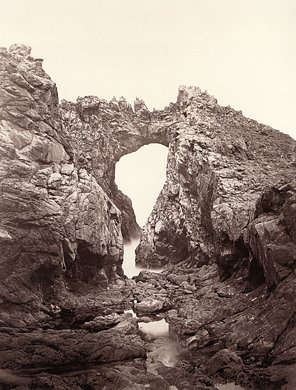 By 1869 Watkins had built an impressive stock of photographs and was generating a dependable income from his art. He moved his studio to more gracious quarters in San Francisco, and in 1871 opened his lavish Yosemite Art Gallery. There he displayed 125 of his large Pacific coast views and had more than a thousand images available for view through stereoscopes.

During these years, he traveled further afield in search of new subjects: he sailed to the barren Farallon Islands, twenty-six miles off the California coast; he photographed the geysers of Sonoma County; he traveled to Mount Shasta in the northern part of the state; and he documented the massive hydraulic gold mining operations in the Sierra Nevada foothills.

Watkins received support in his travels from his friend Collis Huntington, a principal in the Central Pacific Railroad, who offered him a flatcar to carry his van filled with photographic materials. By 1869 the Central Pacific line had pushed through the Sierra Nevada mountains, enabling Watkins to make photographs of the wilderness landscapes that could now be seen by railroad travelers. 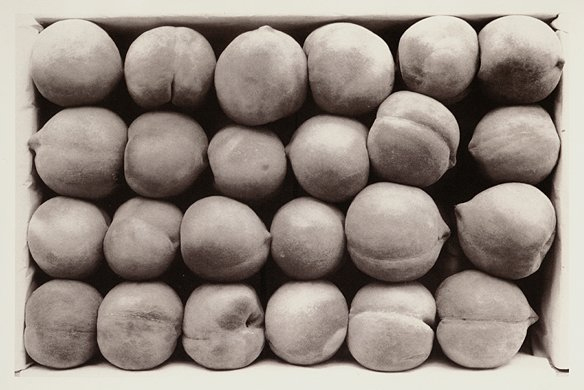 During the last years of his career, Watkins' fortunes declined. Following the banking crisis of 1875, he was forced to turn over his gallery and entire stock of negatives to a creditor. Now without inventory, he began again with a "New Series" of photographs, which includes a wide variety of subjects and formats.

With the railroad reaching Southern California and Arizona, Watkins was able to travel to the resorts at the end of its tracks. In Kern County, California, he photographed peaches and other crops grown with the aid of new irrigation systems, and in ever more remote parts of the West, he continued to make pictures for land inventories. His travels, however, began to be curtailed by deteriorating health, and by his marriage at the age of fifty and the subsequent birth of two children. For the rest of his life, Watkins was plagued by economic hardship; in 1895 he lived with his wife and children for several months in an abandoned railroad boxcar. He lost his studio in an earthquake in 1906, by which time he had stopped making photographs, and died in 1916.