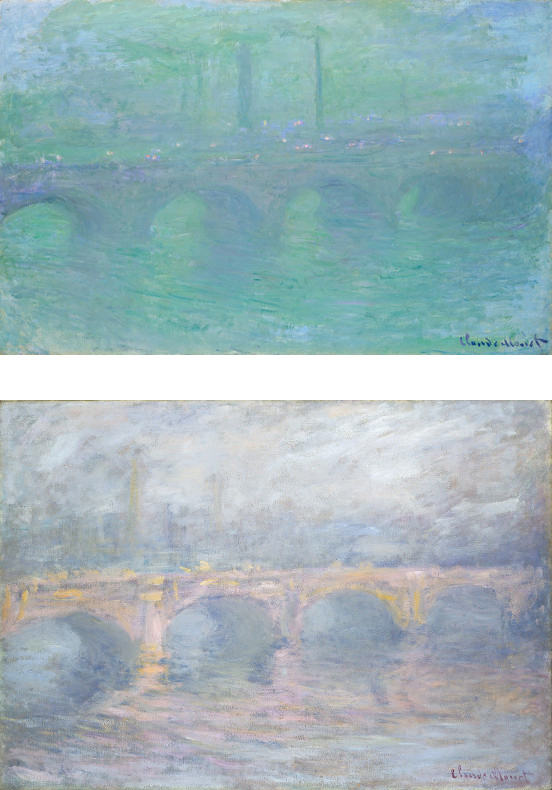 By the 1880s, the diverse artists most closely associated with impressionism moved into other modes of painting. Camille Pissarro experimented with neoimpressionism, whose adherents explored color theory and other scientific bases for their art. Auguste Renoir went to Italy and was inspired by works of the Renaissance to adopt a more classical style. And Monet began to explore the same subject repeatedly in what are known today as his series paintings: grainstacks, poplar trees, Rouen Cathedral, and other subjects, some near his home, others in places where he traveled, such as England, Norway, and Italy. Finally, in the last decades of his life, Monet devoted his entire artistic attention to the lily pond in the garden he created at Giverny.

The series pictures diverged from the spontaneity of earlier impressionist work. Though Monet began them in front of his subject—often working on several canvases simultaneously—he spent many long hours reworking them in his studio, sometimes over a period of years. "The further I go," he wrote, "the better I see that it takes a great deal of work to succeed in rendering what I want to render: 'instantaneity,' above all the enveloppe, the same light spread over everything, and I'm more than ever disgusted at things that come easily, at the first attempt."

By enveloppe, Monet was referring to the air itself, the unifying atmosphere that lay between him and his subject. As a younger man, he had sought to capture the visual effects of light and weather by painting quickly and directly out of doors, but now he pursued the most ephemeral effects slowly and with deliberation. Color, texture, and the moods they could produce assumed as great an importance in his work as the paintings' subject, be it cathedral, river, or his beloved garden. Monet also sought to unify works in his multi-canvas series, bringing them into a whole, a goal most important to him in his late water lily pictures.

During the early years of impressionism, one of Monet's primary intentions was to capture fleeting effects of light and atmosphere. Working quickly, out of doors, he sought to transcribe with directness and spontaneity his sensory experience of the landscape before him. But by about 1880, when this picture was painted, Monet was beginning to show more interest in the painted surface itself. This interest would lead him to explore the same subject repeatedly in his series paintings, seeking to unify individual canvases and harmonize each series as a whole.

Here, brushstrokes vary in response to the different textures they portray—contrast, for example, the quick horizontal skips in the river's gently rippled surface with the rounder, swirling forms of the sky. But it is the foreground, where thick grasses and flowers are painted with crowded, exuberant strokes, that draws our attention. These heavy layers of paint were probably not completed on the spot, but instead carefully reworked in the studio. The strokes assume an importance in their own right, becoming decorative as well as descriptive. Monet, however, never strays far from the natural forms that were his inspiration.

In late January or early February 1892, Monet rented rooms across from Rouen cathedral. He remained until spring, painting its looming façade many times, most often as we see it here, close up and cropped to the sides. The next winter he returned to paint the cathedral again, making in all more than thirty views of it. But it was not so much the deeply carved Gothic façade that was Monet's subject as it was the atmosphere—the enveloppe—that surrounded the building. "To me the motif itself is an insignificant factor," Monet said. "What I want to reproduce is what exists between the motif and me."

Monet worked on a number of canvases simultaneously, moving from one to the next as the light and weather changed. From the late 1860s Monet had attempted to transcribe his sensory impression of the landscape, but his intentions were now different. He continued to claim that his works were spontaneous records of his visual experience, but increasingly, he elaborated on them in the studio, seeking qualities not strictly based on observation. With each layer of paint he added, in fact, the further the picture seemed to depart from its subject, becoming pure paint and effect.

He brought the cathedral paintings back to his home in Giverny (about halfway between Paris and Rouen). Heavily painted surfaces reveal him struggling at times to finish these paintings. Monet conceived of them as a single project and did not consider any one complete until all were finished. He finally exhibited twenty of them in Paris in 1895. Monet's aims were no longer to simply record his sensory experience, but to explore light and color more deliberately as purely artistic concerns and as expressions of mood. He was seeking, he wrote a friend while working on the cathedral series, "more serious qualities, that one might live longer with one of these canvases."

From the early 1860s until 1889, not a single year passed that Monet did not paint the Seine. Its flower-strewn banks and watery reflections appear in six of his paintings in the National Gallery of Art. In 1896, though, he began a more systematic study of the river near his home at Giverny, where he moved in 1883. Lured by the lifting haze and quickly changing light of early morning, he often rose before sunrise—at 3:30 a.m.—to be at his easel by dawn. He worked from a flat-bottomed boat tied up near the bank. But, as with his other series paintings, Monet only began the pictures outdoors, elaborating them over a period of months in his studio, taking special pains to adjust their light. These paintings, more precisely than his other series pictures, show the progression of time and the subtle changes in light as hours, even minutes, pass.

This painting is related to the early morning series, but is even less defined. The paint here, although it is often thickly applied on the canvas, gives the impression of transparency, like thin veils of mist. This enveloppe of atmosphere unifies the picture with a vaporous luminosity. Rather than focus on the trees, the line of the water, or sky, Monet subsumes these individual shapes to a soft light that is the painting's true subject. The surface of the canvas becomes a decorative pattern of curving arabesques.

Monet and his family lived in England briefly, seeking refuge there during the Franco-Prussian war (1870–1871), and returned in the late 1880s, staying with his artist friends James McNeill Whistler and John Singer Sargent, expatriate Americans who acted as his guides and translators. He also spent time studying the Thames River.

Between 1899 and 1901, Monet made three trips to London specifically to paint. He went in winter, when the city was clouded with fog and the smoke of coal fires. "Without fog," Monet said, "London would not be a beautiful city. It is the fog that gives it its magnificent breadth." From his rooms on the sixth floor of the Savoy Hotel, Monet's view up and down the Thames provided him subject matter for several series pictures. He could see Waterloo Bridge, Charing Cross Bridge, and the Houses of Parliament. In all he completed more than one hundred Thames paintings. Most, like this one, render the city's famous landmarks as darkened silhouettes cloaked in the misty sky. He worked at prescribed times of day to capture this backlit effect, often complaining about the rapidity with which conditions changed.

In 1904, Monet exhibited thirty-seven London pictures, including this one and Waterloo Bridge, Gray Day at the gallery of his Paris dealer.

With their smokestacks, barge traffic, and busy bridges, Monet's London paintings were emphatically urban—the only urban subjects he painted after the 1870s. After returning to France following the Franco-Prussian War, he moved from Paris, preferring to live nearer the countryside. His interest in London and its light-filtering fog may have been spurred by admiration for the English artist J. M. W. Turner. Turner's luminous views challenged many traditional ideas of landscape painting. By the 1890s, paintings of the London fog were an established and popular subject among artists including American expatriate James McNeill Whistler (whose Grey and Silver: Chelsea Wharf is in the National Gallery of Art collection).

Like Whistler, most artists used a subdued palette and a limited range of colors to reproduce the grayness of the city. Monet's London paintings are quite different. Even in these subjects dulled by fog and coal dust, he perceived color in every form. Drifting mists are painted with delicate shades of lilac and pink, and the sky is tinged with pale olive. The shaded arches of the bridge are darkened with blues, not black, and its traffic is highlighted with brilliant flecks of scarlet.

In the last decades of Monet's life, his prized water garden at Giverny became a subject the artist explored obsessively, painting it 250 times between 1900 and his death. Eventually, it was his only subject. He began construction of the water garden as soon as he moved to Giverny, petitioning local authorities to divert water from a nearby river. The resulting landscape was Monet's invention entirely, and he used it as his creative focus and inspiration.

The treatment of the water's surface, like the enveloppe of light and atmosphere that bathed the cathedrals and other serial subjects, unified the Giverny work. Here, the sky has disappeared from the painting; the lush foliage rises all the way to the horizon, and space is flattened by the decorative arch of the bridge. Our attention is focused onto the painting itself and held there, not drawn into the scene depicted. In later lily pond paintings, even more of the setting evaporates, and the water's surface alone occupies the entire canvas. Floating lily pads and mirrored reflections assume equal stature, blurring distinctions between solid objects and transitory effects of light. Monet had always been interested in reflections, seeing their fragmented forms as a natural equivalent for his own broken brushwork.

The Japanese Footbridge, 1899, oil on canvas, Gift of Victoria Nebeker Coberly, in memory of her son John W. Mudd, and Walter H. and Leonore Annenberg, 1992.9.1