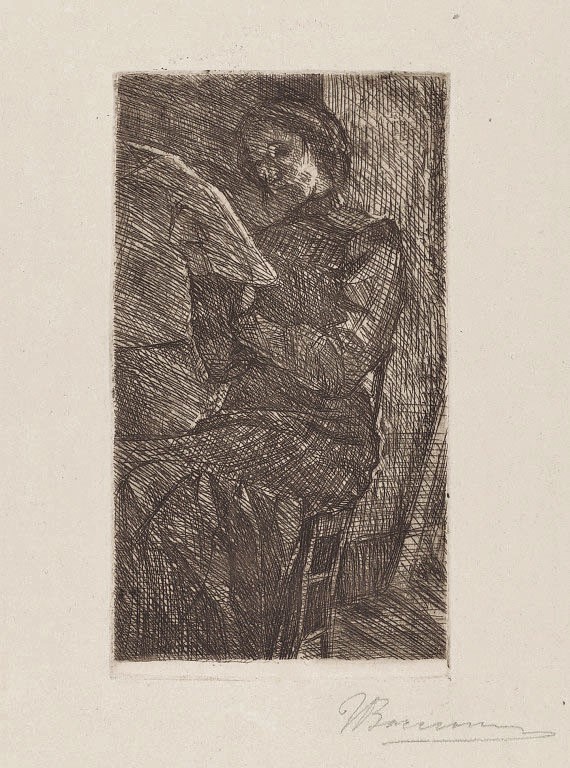 All of Boccioni’s thirty etchings were created in a brief, three-year period of transition from an early, more realistic style to one dedicated to capturing the dynamism of modern life. The small scale and rapid execution underscore his intimate relationships to the subject, who has been identified as his sister. The ingredients of his mature futurist style are evident in the diagonal armature of the composition, the simplified planes of the modeling, and the energetic hatching. 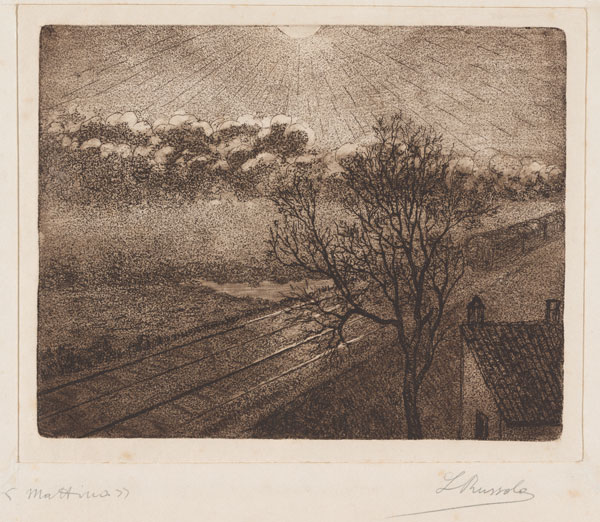 A railroad track dominates the landscape, and the sun’s radiance is blocked by smoke trailing a train’s engine. Russolo signed the futurist manifesto of 1910 and shared their enthusiasm for the progressive forces of industrialization, although with ambivalent feelings about its effect on the landscape. In handling, this print lies between the delicate pointillism of Russolo’s early landscapes and the striking electricity of his compositions of the early 1910s. Trained as a musician, Russolo dedicated himself exclusively to music after 1913, pioneering non-notational music based upon non-traditional instrumentation and random sounds and noises. 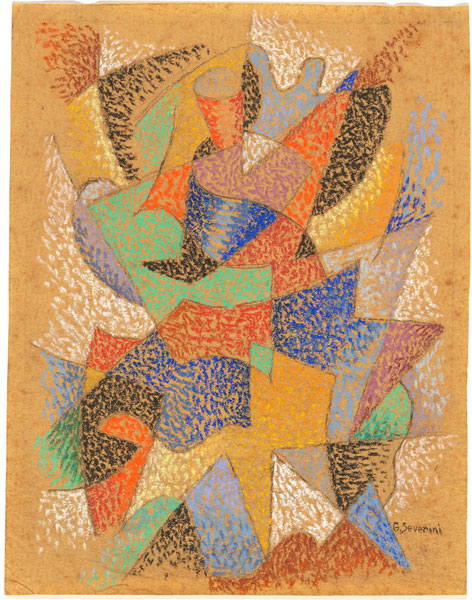 This drawing is closely related to one of the most important paintings of Severini’s brief futurist period. The dancing shapes, vibrant surface, and luminous color accord with the movement’s aesthetic, while the fractured subject (the ballerina of the title), barely recognizable by a head represented by a red cone at top and a triangular left arm raised, reflects Severini’s experience of cubism in Paris, where he had moved in 1906. Severini’s brushwork, broken into countless dots of pigment, distinguished him from other futurists and allied him with the divisionists, with whom he had trained in Milan. 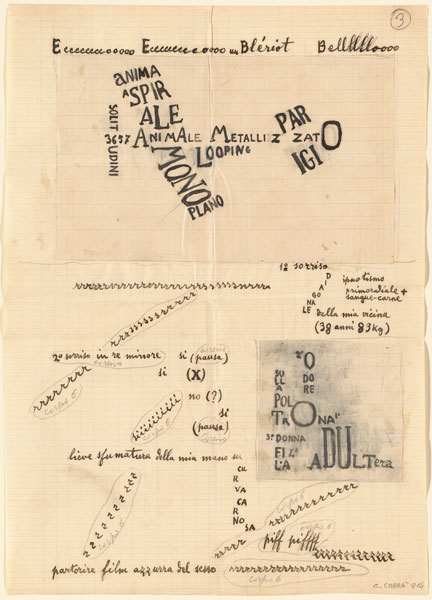 Graphic Rhythm with Airplane (Homage to Blériot), 1914
pen and ink with graphite and collage on graph paper
Patrons’ Permanent Fund, 2004.62.1

This page from a notebook is an outstanding example of how the futurist language could generate complex meaning. The upper half is a tribute to the French aviator Louis Blériot’s first flight across the English Channel in 1909, with words referring to that accomplishment composed into the shape of his monoplane. In the lower half, phrases and letters refer to an illicit affair. The diagonal of their arrangement rhymes with the shape of the monoplane, while the horizontal lines suggest murmured sounds and the pattern of waves beneath the flight. Thus connected and inflected, flight and sexual activity—their risk, daring, and physical movement—become mutual metaphors. The most restless of the futurists, Carrà would shortly abandon the group to develop a more concrete, classicizing style that he and Giorgio de Chirico called metaphysical painting. Carrà's Head of a Boy (also included in this slideshow) demonstrates this simplified yet monumental style. 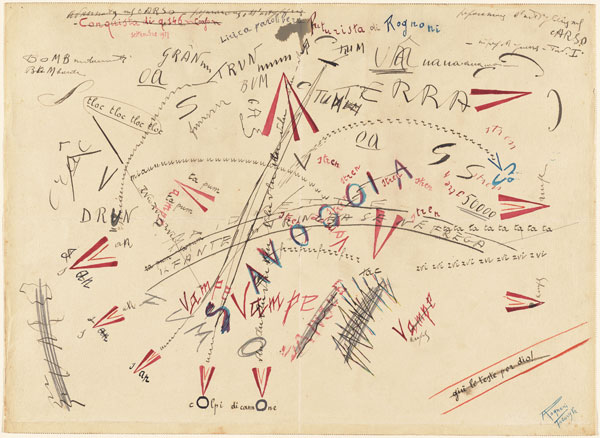 During the spring and summer of 1917, the Italian army advanced on Austro-Hungarian forces occupying the Carso Plateau on the northeastern Italian border with modern Slovenia. Rognoni noted at the upper left corner that this drawing represents a massive barrage of artillery fire preceding an assault. True to the futurist credo, the image combines pure form—the arcing lines of trajectories and trenches—with invented words imitating sounds—the “ta pum ta pum” (at center left) of cannons, the “ta ta ta ta” (at middle right) of machine guns—in a kind of free verse (“lirica parolibera”) with ironic interjections (“The soldier in the trench doesn’t give a damn” and “SAVOOOIA,” a play on the family name of the Italian monarchy). 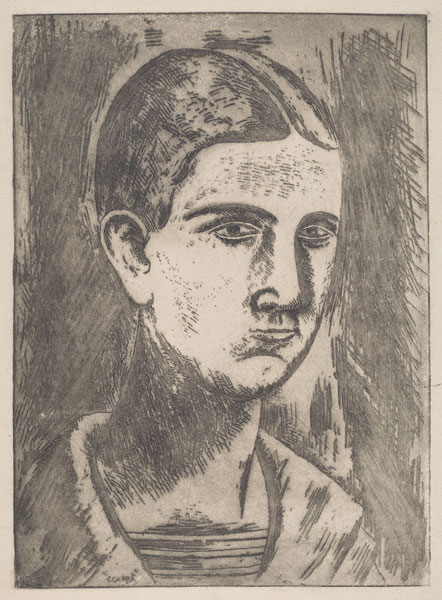 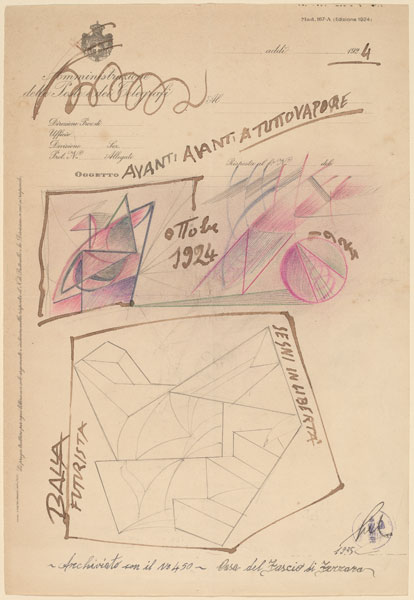 Full Speed Ahead (AVANTI AVANTI A TUTTO VAPORE), 1924
Pen and ink, colored pencil and graphite on a telegraph form
William B. O’Neal Fund, 2012.55.1