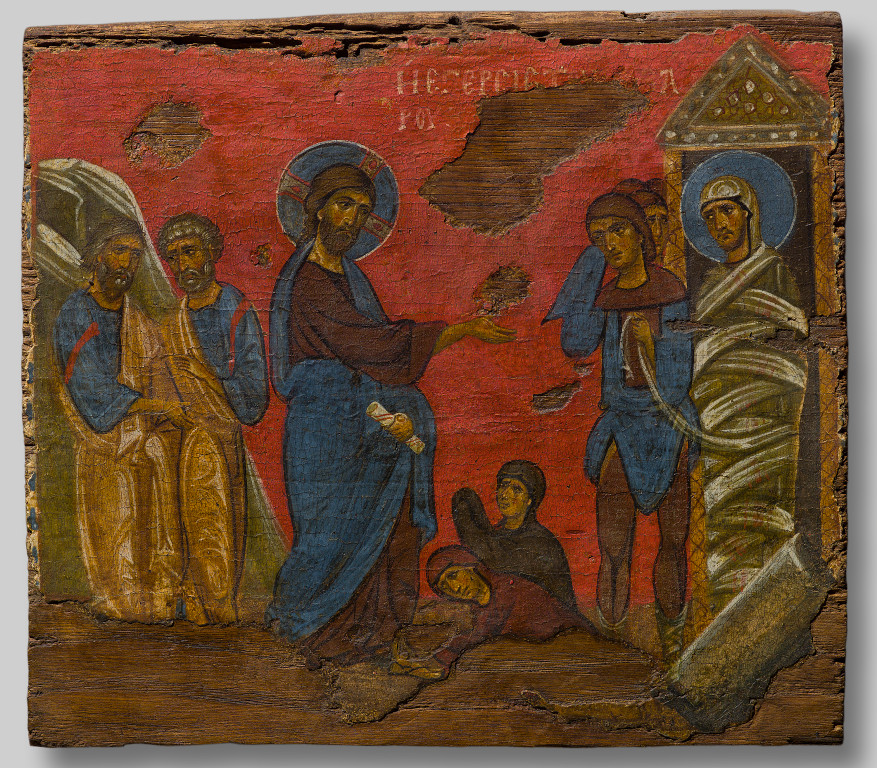 The subject is one of Christ’s miracles: the raising of Lazarus from the dead. His two sisters kneel at Christ’s feet, while the apostles Andrew and Peter witness the resurrection. Lazarus stands at the entrance to his tomb, still in his burial shroud, which a youth is beginning to unwind. Instead of the usual gold background, the artist used less expensive red pigment for the sky, another way to situate the event in a timeless, otherworldly realm.

Icon with the raising of Lazarus, 12th century, tempera on wood, Athens, Byzantine and Christian Museum 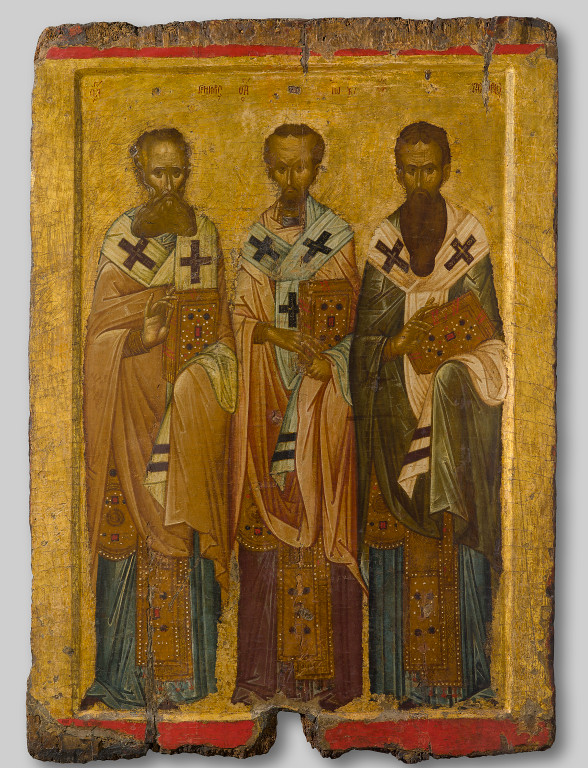 The three great church fathers, Saints Gregory, John Chrysostom, and Basil, lived in the fourth century and advocated the doctrine of the Trinity. Each hierarch bears an omophorion, a white stole decorated with crosses that Orthodox bishops wore to signify their spiritual authority.

Icon of the three hierarchs, probably Thessaloniki, first half of 14th century, tempera and gold on wood, Athens, Byzantine and Christian Museum 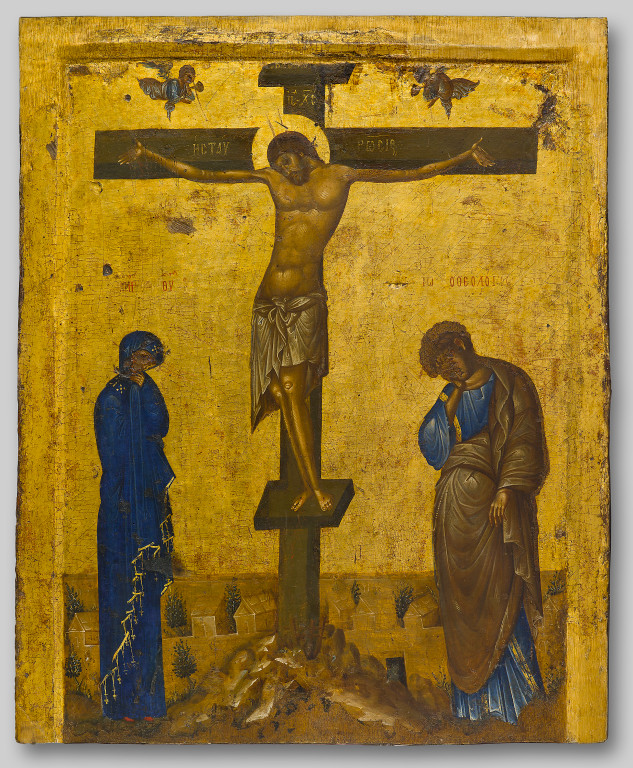 Narrative details described in the Bible — the Roman soldiers, mocking priests, and two thieves crucified with Jesus — all are eliminated here to focus attention on Christ flanked by the grieving figures of pencil-thin Mary and the youthful Saint John. The result is a work of austere beauty, with only a low crenellated wall to indicate that the scene takes place in Jerusalem. Probably after the Ottoman occupation of Greece in the mid-15th century, the faces were scratched or gouged, perhaps with the tip of a sword. An image of the Virgin and child is painted on the other side of the icon.

Icon of the Crucifixion, probably Constantinople or Thessaloniki, first half of 14th century, tempera and gold on wood, Athens, Byzantine and Christian Museum 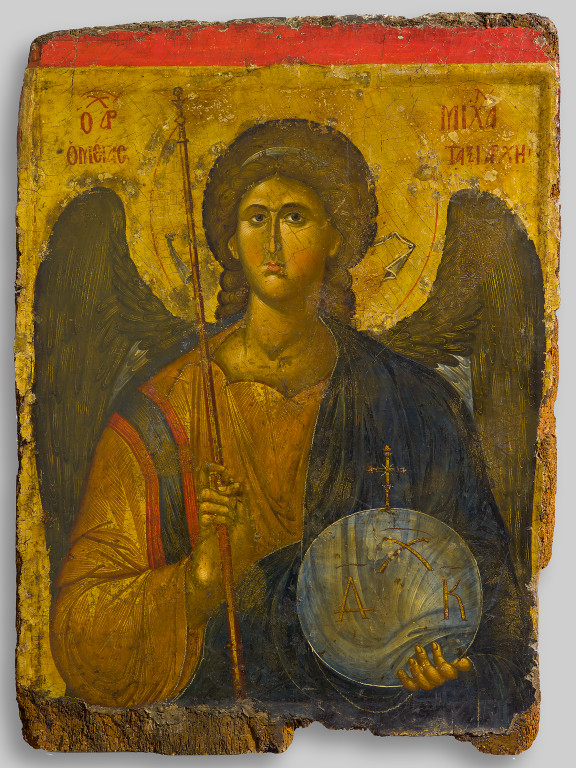 Icon of the archangel Michael, Constantinople, first half of 14th century, tempera and gold on wood, Athens, Byzantine and Christian Museum, Gift of a Greek of Istanbul, 1958

Images of Christ Pantokrator (Almighty or All-Ruler) dominate the most important areas of Orthodox churches, appearing in the dome, in the apse above the altar, or on the templon screen in front of the sanctuary, which was likely the original location of this icon. The large expressive eyes and fine golden highlights enliven the figure, who holds the Gospels opened to a passage emphasizing the forgiveness of sins (Matthew 6:14 – 15). The artist created the illusion of light striking the halo from the left, giving it a slightly raised appearance in imitation of actual relief haloes found on other 14th century icons painted in Thessaloniki. 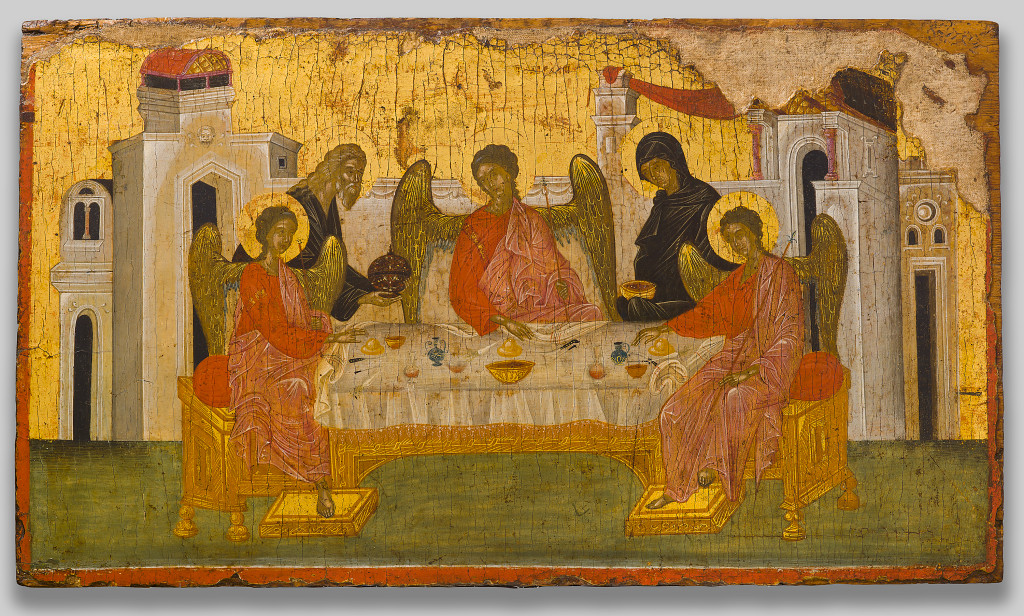 The Old Testament patriarch Abraham and his wife Sarah generously received three strangers, unaware that they were messengers of God (Genesis 18:1). Christians interpreted the event as symbolic of the Holy Trinity and depicted the strangers in their angelic form. The gilded bowls, glass vessels, and cutlery on the table would have been familiar dinnerware to Byzantine aristocrats of the time.