The town of Argenteuil lies on the banks of the Seine eleven kilometers to the northwest of Paris, a fifteen-minute train ride from the capital's Gare Saint-Lazare. With its railway line and factories, residences and river walks, it is in many ways typical of the suburban towns on the outskirts of Paris. Yet the contribution it made to the evolution of modern French painting sets it apart from neighboring villages. During the 1870s and 1880s Argenteuil became an important source of inspiration for the impressionist artists, who immortalized its river views, bridges, streets, and gardens in their groundbreaking paintings. Their depictions of Argenteuil, fifty-two of which are gathered together in this exhibition, constitute one of the most exhaustive representations ever made of a single place and present a panorama of the predominant themes and quintessential features of impressionist painting.

Argenteuil is described in nineteenth-century guidebooks as an agréable petite ville. Dating back to the seventh century, when a convent was founded on the site, the community became well known for its superior agricultural produce--wine grapes and asparagus--and gypsum deposits, a source of the famous "plaster of Paris." By the 1870s, however, when the impressionists painted there, the picturesque village had developed into a thriving town. The transformation began in 1851, when a railway line connected Argenteuil to Paris, attracting many new factories and businesses and increasing the town's population. By the second half of the nineteenth century local industries included tanneries and chemical plants as well as the Joly iron works, one of the largest iron fabricators in France. Despite these developments, Argenteuil retained much of its rustic charm and during the 1850s became a popular destination for day-trippers from Paris, drawn there by the pleasant riverside promenades and boating activities. This spectacular stretch of the Seine, where the river reached its widest and deepest points, hosted a great variety of events, from sailing and steamboat races to water jousts and recreational boating. Argenteuil was therefore a town with many facets, a place that combined leisure and labor, fields and factories, rural beauty and urban life. These contrasts epitomized the modernity and change that the impressionists sought to embody in their novel landscape paintings.

During the late 1860s and 1870s the impressionists developed a style of painting that departed radically from existing traditions of European art. Rejecting the notion that high art should represent elevated subjects from mythology, history, or religious sources, these avant-garde artists turned their attention to the people, sites, and scenes of their own age. One contemporary critic wrote: "To paint what they see, to reproduce nature without interpreting it and without arranging it, seems to be the goal of these artists." The impressionists wished to capture momentary effects, such as the flux and movement of modern life or the fleeting properties of light on forms in nature, and they devised new techniques of painting to achieve this aim. Their broken brushwork, irregular surfaces, heightened color, and sense of spontaneity gave physical expression to their perceptions of a particular time and place. Contemporaries regarded the paintings as crude and sketchy, and at the first public exhibition of these works, the artists were disparagingly called mere "impressionists" by the conservative art critic Louis Leroy.

In addition to developing their technical innovations, the impressionists succeeded in breaking free from the constraints of the official art exhibitions of their day. At that time the Paris art world was dominated by the annual Salon, an enormous exhibition of contemporary sculpture and painting. The works were selected by a jury, which favored paintings that conformed to the principles of the academic art establishment--representing elevated subject matter and demonstrating the traditional artistic skills of draftsmanship and modeling. The thousands of paintings accepted each year were hung frame to frame from floor to ceiling in a large exhibition space, where small canvases, such as landscapes, were often overwhelmed. Frustrated by the Salon system, the impressionists set out to establish their own alternative art exhibitions, free from the dictates of an official selecting jury and giving greater consideration to how paintings were hung. Under the leadership of Camille Pissarro and Claude Monet, they formed the Anonymous Society of Artists, Painters, Sculptors, and Engravers, which held eight exhibitions between 1874 and 1886.

The Impressionists and the Paris Suburbs

Although the impressionist exhibitions took place in Paris, most of the core members of the group spent the 1870s living and working in smaller towns surrounding the capital. Monet moved to Argenteuil in December 1871 and stayed there for six years. During this critical period of impressionism his house was an important meeting place for his friends and colleagues. Alfred Sisley, Auguste Renoir, Edouard Manet, Gustave Caillebotte, Pissarro, Edgar Degas, and Paul Cézanne all visited him at various times, either to share a meal or to paint and discuss their artistic goals. Argenteuil had much to offer Monet and his fellow impressionists: conveniently located with respect to Paris, yet less expensive than living in the city, it also presented them with a wide range of motifs for their landscape paintings. The views in and around the town were a great inspiration for Monet throughout his stay, making his years in Argenteuil among the most productive of his career.

Claude Monet, The Artist's Garden in Argenteuil (A Corner of the Garden with Dahlias), 1873, oil on canvas, Gift of Janice H. Levin, in Honor of the 50th Anniversary of the National Gallery of Art, 1991.27.1 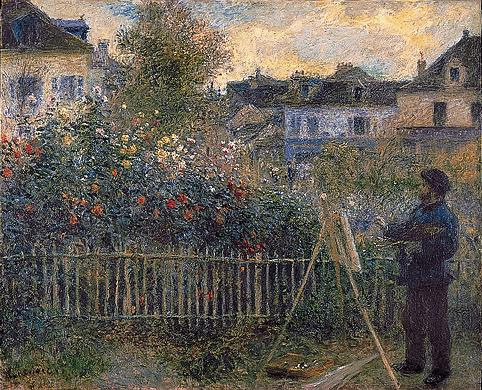 In their depictions of the natural world the impressionists focused on ephemeral qualities such as the nuances of sunlight and shadow. They sought to represent these passing effects as truthfully as possible and, in doing so, to capture the immediacy of experiencing nature at first hand. To this end they adopted the practice of painting outdoors, which enabled them to work from close, direct observation and record their perceptions without delay. A portrait by Renoir presents Monet as the archetypical impressionist: standing at his portable easel en plein air, palette and brushes in one hand, gazing intently at the flowers in the garden while holding his other hand poised before his canvas. 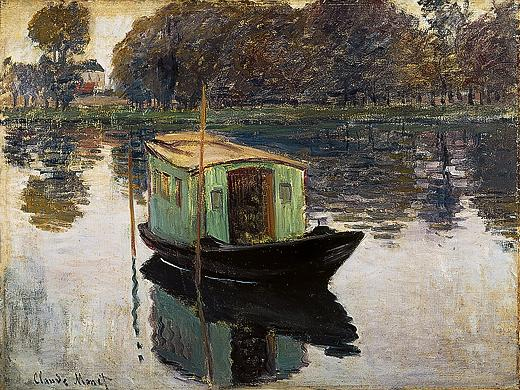 Monet also had a studio boat built when he was living in Argenteuil, making it possible for him to paint virtually from the surface of the river and to create compelling pictures that represent the shimmering effects of light on water. The exercise of painting in the open air was not new; for centuries landscape painters had made studies directly from nature. Yet such works were previously regarded merely as preparatory for larger-scale compositions, whereas the impressionists elevated what most of their contemporaries regarded as sketches to the level of finished works of art, worthy of being framed, exhibited, and sold.

In their attempts to recreate the vivid colors of nature as convincingly as possible, the impressionists invented painting techniques that differed radically from those of their immediate predecessors. Mid-nineteenth-century landscape painters Jean-François Millet and Thèodore Rousseau, who painted the rural landscapes around the village of Barbizon south of Paris, were a strong influence on early impressionism, notably in their choice of humble subject matter and in their intimate views of nature. At the same time, the Barbizon painters followed traditional methods of landscape painting, building their images with carefully blended hues and controlled brushwork on a dark-toned ground. The impressionists, by contrast, used bright, unmodulated colors, applied in bold, irregular brush strokes on a light-tinted canvas. Their deft application of paint created the appearance of spontaneity, as if their images were captured in a single moment. This was the desired effect, but these works of course took longer than an instant to paint: Renoir and Monet often returned to the same location on successive days to observe the effects of light at a certain hour, and all of the impressionists usually finished their canvases indoors. 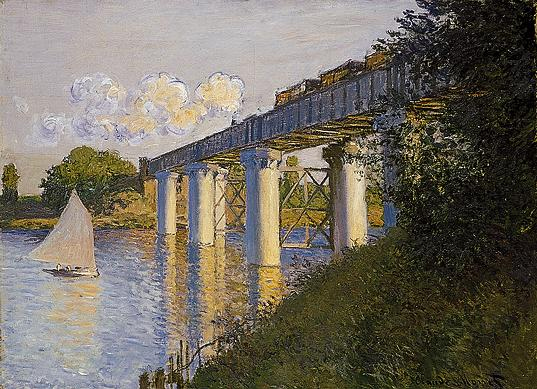 In addition to representing the natural landscape, the impressionists were eager to explore the ways in which industrial and technological developments were changing the world around them. Argenteuil, like many suburban towns near Paris, underwent rapid transformation in the second half of the nineteenth century. In 1863 a new iron railroad bridge was built over the Seine, bringing trains directly into town; previously they only reached the opposite bank of the river. Monet painted several views of this monumental bridge, situated boldly within the natural environment, its smooth columns gleaming in the sun. Argenteuil's highway bridge, dating back to 1830, also attracted the artist's attention. 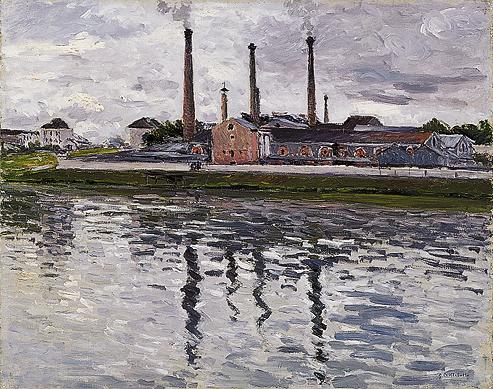 Caillebotte, too, was fascinated by the modern structures that dotted the landscape around Argenteuil. With unabashed candor he rendered both bridges as well as the huge factory complex of the local distillery along the Seine, its geometric forms dramatically reflected in the water below. Both artists fashioned harmonious relationships out of the new and the old: industrial chimneys appear next to church spires, steamboats beside sailing vessels, massive bridges springing over the iridescent surface of the river. 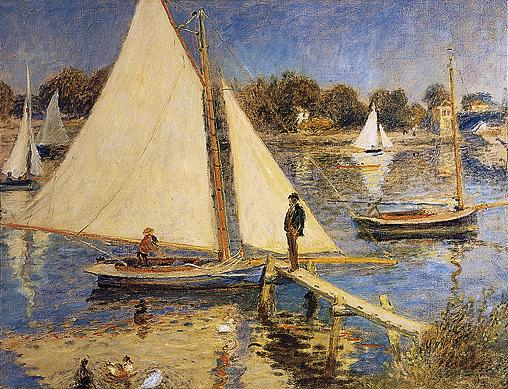 The impressionists' interest in scenes of modern life also led them to focus on Argenteuil's leisure activities and urban visitors. Its pleasant river walks, recreational boating, and famous sailing races were depicted in many of their works. Renoir's vibrant Sailboats at Argenteuil, which shows the boat basin filled with activity, suggests the popularity of these events. The impressionists often set up their easels along the paths that lined the banks of the Seine. From such vantage points Monet painted expansive views that presented the range of Argenteuil's attractions: its broad, sunlit promenades, its tall avenues of trees, its calm waters. Monet, according to the contemporary novelist, Emile Zola, "brings Paris to the country....He loves with particular affection nature that man makes modern." 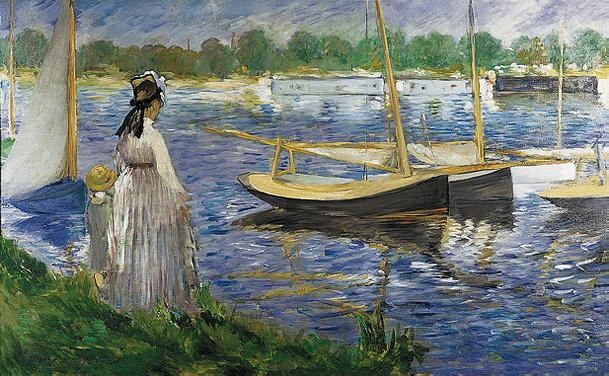 Other artists, including Manet and Caillebotte, also focused on visitors from the city, who had become a ubiquitous feature of the Argenteuil landscape by the 1870s. In Manet's radiant painting, a mother and child stand on the banks of the river with their backs to the viewer, alone before an array of unmanned sailboats and low-lying laundry houses.

Edouard Manet, The Seine at Argenteuil, 1874, Private Collection, on extended loan to the Courtauld Gallery, London 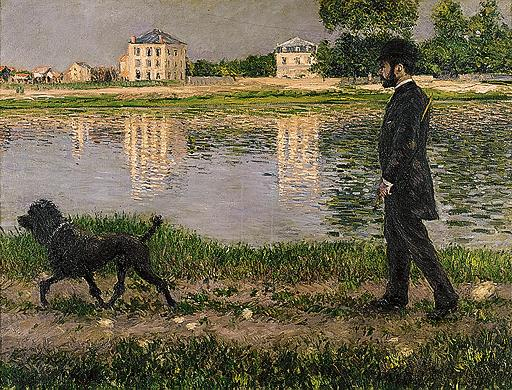 Caillebotte depicted one bourgeois gentleman in his black hat and long coat striding purposefully along the Seine with his spirited dog at Petit Gennevilliers (just across the river from Argenteuil), where the artist owned a house.

One of the most unusual aspects of the impressionists' work at Argenteuil was their communal approach. On numerous occasions Monet stood alongside one of his artist friends, and both painted the same scene. Sisley was the first to visit Monet in Argenteuil in 1872, and they initiated this custom. Together they painted four different views, the earliest of which were the renderings of the Boulevard Hèloïse, one of Argenteuil's main thoroughfares. In 1873 and 1874 Monet continued this practice with Renoir, painting five pendant views, among them the paired versions of the celebrated Sailboats at Argenteuil. Such close cooperation was quite rare and gave the painters many opportunities to discuss their artistic strategies and to share information, observations, and technical innovations. When Manet visited Monet in Argenteuil in the summer of 1874, the older artist was encouraged to adopt the impressionist discipline of painting en plein air. In addition to working side by side, the artists also made portraits of one another during their stays with Monet. Renoir, for example, painted his host on four occasions, not only avoiding the expense of hiring a model but also deepening their friendship. As a group, the impressionists tried to put shared goals before individual differences, and common concerns before personal gains. Nowhere is this more apparent than in their paintings of Argenteuil.