This exhibition presents one of the most significant private collections of old master drawings in the United States. The remarkable group was assembled over the course of only eleven years by the collector, who prefers to remain anonymous. She selected each work based on her personal response, yet the resulting collection, which spans four centuries and six national schools, shows an extraordinary variety of artistic expression, subject, style, and medium.

On display are one hundred drawings lent by the collector, together with twelve she has generously given to the National Gallery of Art over the past decade. The exhibition is arranged to integrate the drawings from the various countries chronologically from the sixteenth through the early twentieth century. This illuminates the collection’s special strength in early Italian and later German drawings. It also reveals intriguing contrasts between Italian and Dutch drawings in the seventeenth century, comparisons between French and Italian works in the eighteenth century, and differences between French, British, and German drawings in the nineteenth century.

François-André Vincent, The Drawing Lesson, 1777, brush and brown wash over graphite on cream laid paper, laid down, with a framing line in brown ink, Anonymous Partial and Promised Gift, 2000.99.1 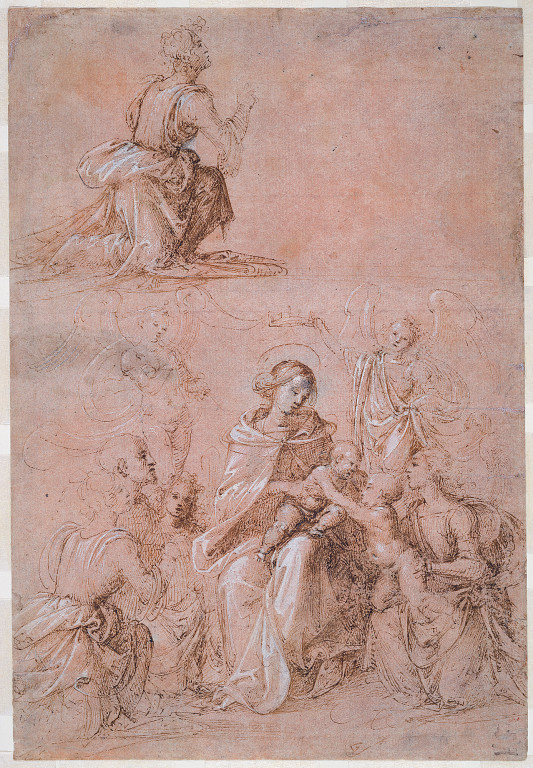 One of the leading draftsmen of the High Renaissance in Florence, Fra Bartolommeo used a particularly complex technique for this delicate study. He first prepared the paper with red chalk to make it light pink. He then sketched the forms in metalpoint (a metal-tipped stylus) before working up the figures in ink with a combination of calligraphic contours and controlled hatching and cross-hatching. He then completed the study with touches of liquid white, applied with the tip of the brush, to suggest the fall of light over the forms.

Fra Bartolommeo, The Virgin and Child Surrounded by Saints and Angels, c. 1500, pen and brown ink heightened with white lead over metalpoint underdrawing on prepared pink paper, Anonymous Partial and Promised Gift, 2003.119.1.a

This view of an unidentified Tuscan hill town was originally part of an album of studies drawn from nature by Fra Bartolommeo at a time when pure landscape was not yet a common subject for artists. The views exhibit an unusual sensitivity to nature and to the changing qualities of light. 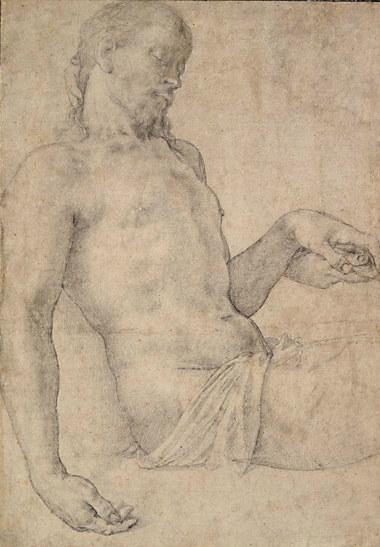 This moving study is an exceptional example of Bronzino’s elegant draftsmanship, exhibiting the strong, sinuous contours, powerful forms, and smooth modeling that characterize his style. Although Christ’s body appears untouched by the torments of the Passion, the inclusion of the hands of unseen mourners – supporting Christ’s head and left hand – adds emotional depth to the study. 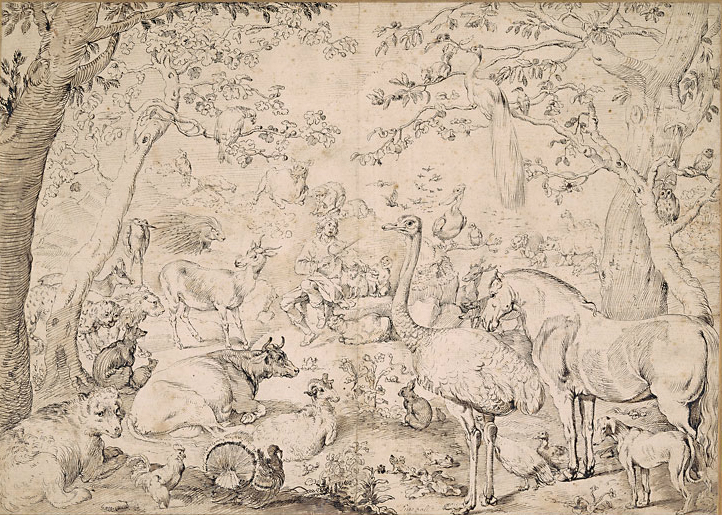 According to Ovid’s Metamorphoses, Orpheus possessed such musical talent that wild animals would come to him, tamed by his song, and trees and rocks would move at the sound of his lyre. Scorza treated this popular subject in at least eight painted versions and four closely related drawings. Elaborate drawings such as this one, with its encyclopedic depiction of the animal kingdom, were in demand as finished works of art. 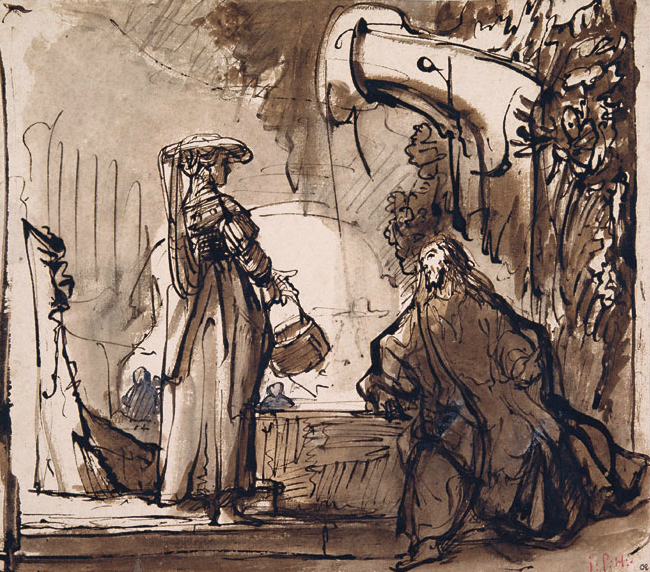 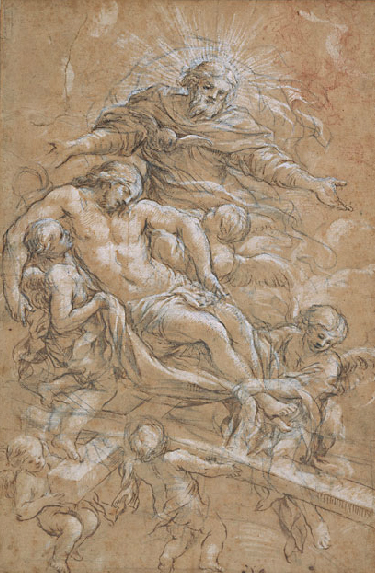 One of the leading painters of his time, Cortona worked on numerous projects for prominent Romans, including members of the papal circle. This drawing is a study for a bronze altarpiece of the Holy Trinity that was commissioned in 1656 by Pope Alexander VII for his family chapel in Santa Maria della Pace in Rome. 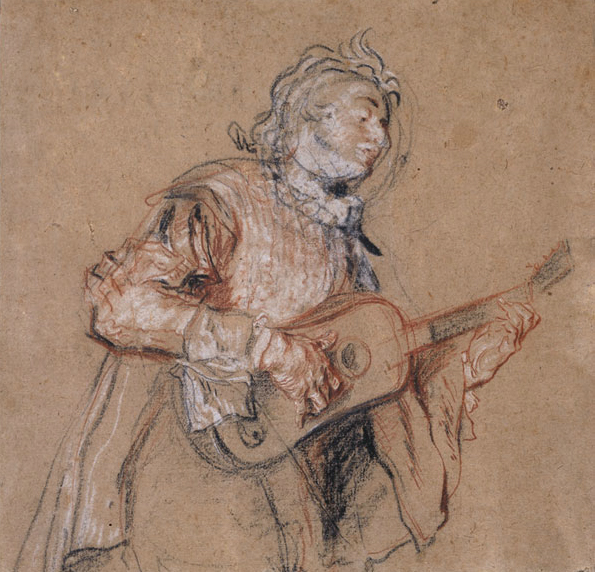 Watteau is regarded as the great master of the troiscrayons (three chalks) drawing technique, in which red, black, and white chalks are combined on brown or gray-brown paper to yield bold coloristic effects. The theatrical lighting from below on the face of this guitarist suggests that the drawings was made during a musical performance. 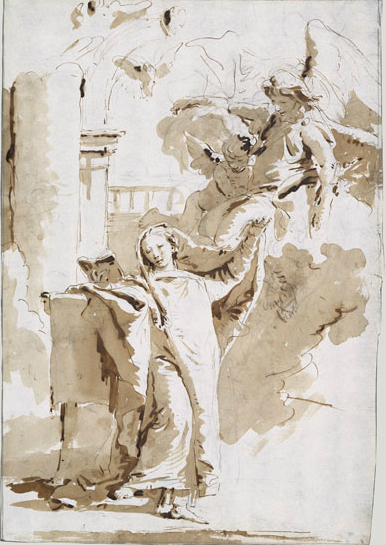 Tiepolo made at least a dozen large-scale compositional drawings of the Annunciation – the moment when Gabriel announces that Mary will bear the son of God. All are executed, like this one, in the brilliant combination of brown ink on white paper for which the artist was famous. This composition, in which the angel descends behind the Virgin as she lifts her veil to shield herself from his presence, is one of Tiepolo’s most original and graceful conceptions.

Although the title of this drawing goes back to the eighteenth century, the actual subject appears to be a lesson in love rather than a lesson in drawing. The ardor of the young man’s glance makes it clear that he is more interested in wooing his pupil than in teaching her to draw. Executed with extraordinary virtuosity, the drawing embodies the very essence of French eighteenth-century elegance, taste, and gallantry.

François-André Vincent, The Drawing Lesson, 1777, brush and brown wash over graphite on cream laid paper, laid down, with a framing line in brown ink, Anonymous Partial and Promised Gift, 2000.99.1 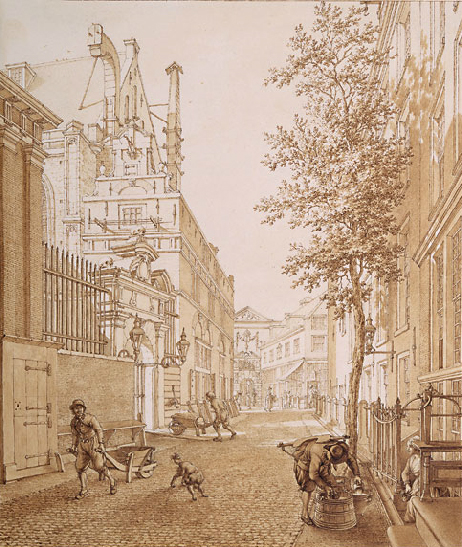 Cats’ own inscription on the back of this sheet identifies the location of this view as “Wide Chapel Lane” in Amsterdam, with the gate of an orphanage at the end of the street. This seemingly ordinary scene contains allegorical meanings: the residential buildings on the right side of the street and the man delivering milk refer to birth and everyday life. In contrast, the church on the left side and the skulls on top of the gate, reminders of death, represent the spiritual side of life.

Jacob Cats, The Wijde Kapelsteeg in Amsterdam with the Burgerweeshuis in the Distance, 1793, Private Collection 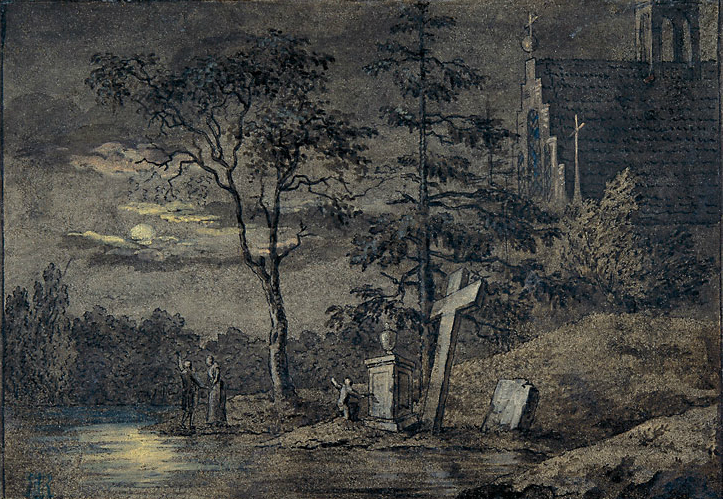 This early work by Friedrich, Germany’s most important romantic artist, encapsulates themes that would intrigue him for decades: the contemplation of nature, enacted here by two figures gazing at the moonlit sky; transience and the inevitability of death, symbolized by the foreground cemetery; and the hope for eternal life, as offered by the church in the background. 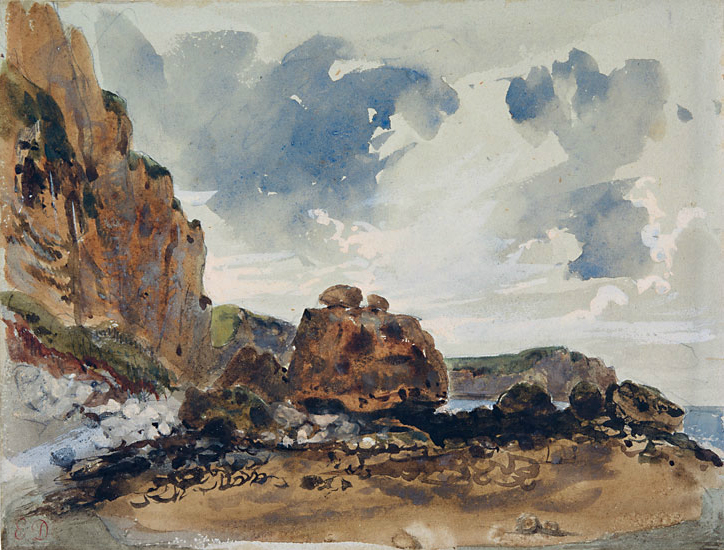 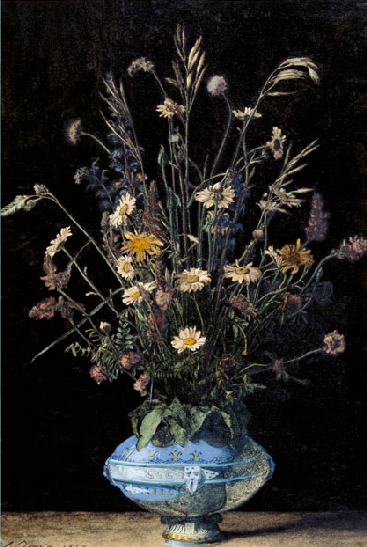 Léon was largely self-taught and worked only when able to escape his responsibilities running the family inn near Paris. The majority of his drawings depict subjects taken from his immediate surroundings: still lifes, interiors, and landscapes. Here the dark, desolate setting and signs of decay in delicate wildflowers contribute to an overall melancholy effect that is typical of his work. Indeed, in 1866 a Parisian art dealer deemed Léon’s watercolors “too dark, not gay enough,” a judgment that led to the artist’s suicide. 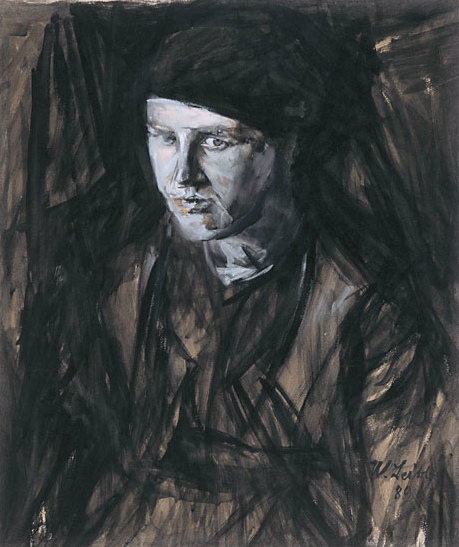