This famous canvas, The Feast of the Gods, formed the key element in one of the finest domestic decorative schemes of the Italian Renaissance—the private study of Alfonso d'Este, duke of Ferrara. The duke commissioned the two leading painters from Venice—first Giovanni Bellini and, later, his former pupil Titian—to depict bacchanals or revelries with mythological themes for the study. Begun by 1511, the room in the castle at Ferrara came to be called the Alabaster Chamber after its alabaster sculpture.

Appropriate to the classical theme of Olympian deities enjoying an outdoor banquet, Giovanni Bellini conceived The Feast as an alignment of figures in a dignified, friezelike arrangement across the foreground. In the right corner, an oak bucket bears a parchment with Bellini's signature and the date 1514. After Bellini's death in 1516, much of the background was altered by another painter, Dosso Dossi, a Ferrarese court artist. Bellini's original landscape, visible today only at the right side, consisted of a screen of trees.

Probably in 1529, after he had contributed three of his own paintings to the Alabaster Chamber, Titian repainted the setting in The Feast again, adding the dramatic mountain. The duke may have directed the younger master to harmonize the repainted landscape with Titian's own, more dynamic pictures. The evolution of the design reveals marked changes in taste between the serene art of Bellini, belonging to the fifteenth century, and the more vigorous style that Titian was developing in the sixteenth century.

The ribald theme comes from The Feasts (Fasti), a long classical poem by Ovid that recounts the origins of many ancient Roman rites and festivals. Ovid (43 B.C.–A.D. 17), describing a banquet given by the god of wine, mentioned an incident that embarrassed Priapus, god of virility.

The beautiful nymph Lotis, shown reclining at the far right, was lulled to sleep by wine. Priapus, overcome by lust, seized the opportunity to take advantage of her and is portrayed bending forward to lift her skirt. His attempt was foiled when an ass, seen at the left, "with raucous braying, gave out an ill-timed roar. Awakened, the startled nymph pushed Priapus away, and the god was laughed at by all." Priapus, his pride wounded, took revenge by demanding the annual sacrifice of a donkey.

The ass stands next to Silenus, a woodland deity who used the beast to carry firewood. Silenus wears a keg on his belt because he was a follower of Bacchus, god of wine. Bacchus himself, seen as an infant, kneels before them while decanting wine into a crystal pitcher.

Reading from left to right, the principal figures are:

Silenus, a woodland god attended by his donkey
Bacchus, the infant god of wine crowned with grape leaves
Silvanus, an old forest god wearing a wreath of pine needles
Mercury, the messenger of the gods carrying his caduceus or herald's staff
Jupiter, the king of the gods accompanied by an eagle
Persephone, holding a quince, a fruit associated in the ancient world with marriage
Pan, a satyr with a grape wreath who blows on his shepherd's pipes
Neptune, the god of the sea sitting beside his trident harpoon
Ceres, the goddess of cereal grains with a wreath of wheat
Apollo, god of the sun and the arts, crowned by laurel and holding a Renaissance stringed musical instrument, the lira da braccio, in lieu of a

classical lyre
Priapus, the god of virility and of vineyards with a scythe, used to prune orchards, hanging from the tree above him
Lotis, one of the naiads, a nymph of fresh waters who represents chastity.

These deities are waited upon by three naiads, nymphs of streams and brooks, and two satyrs, goat-footed inhabitants of the wilderness. On the distant mountain, which Titian added to Bellini's picture, two more satyrs cavort drunkenly and a hunting hound chases a stag. 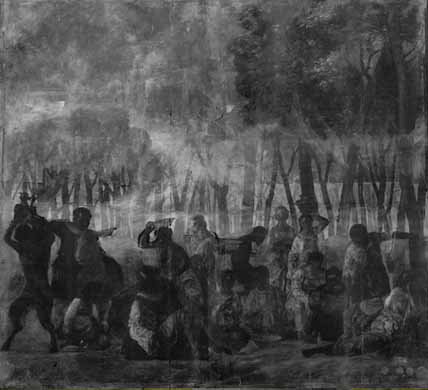 The Feast of the Gods was Giovanni Bellini's last great painting and one of only a few that he executed on canvas. The artist, whose career began in the 1450s, was trained to paint on wooden panels, which require a very meticulous application of pigment. When he worked on canvas late in his career, Bellini retained his tight, precise brushwork. The flesh tones, iridescent silks, and even the foreground pebbles here demonstrate his delicate touch.

Bellini altered his conception while he worked, and some of these changes (or pentimenti) are now visible. A few of the female figures, for instance, were once more modestly attired. A careful inspection of their necks proves that Bellini lowered their bodices to enhance the subject's eroticism.

An X-radiograph shows Bellini's original intentions with respect to the background. Initially the figures sat before a continuous band of trees, silhouetted against a clear horizon. This parallel arrangement of forest and sky focused the viewer's attention upon the participants.

In 1516, two years after finishing The Feast, Bellini died in his native Venice. Sometime thereafter, the setting of his picture was altered. Dosso Dossi was the court artist in residence at Ferrara, and it is possible that he modified Bellini's work to suit other decorations he was adding to the Alabaster Chamber.

In 1529, Titian is known to have visited Ferrara for three months. Probably at that time, he painted over most of the background again, giving it a mountain with steep cliffs and an ultramarine blue sky. Visible traces remain of the two earlier landscapes. The tree trunks on the right third of the scene survive from Bellini's woodland grove. Through the clouds, at the extreme left, emerge ghostly images of buildings that the second painter depicted on a gentle hillside. The pheasant perched on a limb at the upper right, and the bright green leaves immediately above that bird, also were retained by Titian from the earlier revision.

Although he trained in Bellini's studio, Titian worked primarily on canvas, which allows a loose, free handling of paint. As seen in the background of The Feast, Titian applied paint more thickly than his master, and his brushstrokes are broader. The added layers of pigment cause the landscape setting to stand up in higher relief than the foreground figures. Viewing the surface of the paint in raking light reveals the edge of this change in depth.

The fact that Alfonso d'Este permitted, or even requested, the repaintings sheds light on a Renaissance patron's attitude toward art. Although Bellini is today regarded as one of the greatest masters, and altering his work would not be tolerated, the duke did not share this reverence. For him, The Feast of the Gods was his personal property, one of the ornaments of his favorite room, and, as its owner, he felt free to change it at will.

X-radiograph of The Feast of the Gods showing Bellini's original intentions for the background.

Alfonso I d'Este (1486–1534), an astute military strategist, inherited the duchy of Ferrara in northeastern Italy. The young duke and his wife, Lucrezia Borgia, patronized authors and artists from throughout Italy. Alfonso's sister, Isabella d'Este of Mantua, also lent him the services of one of the Renaissance's most admired classical scholars, Mario Equicola (c. 1470–1525).

On 9 October 1511, Equicola wrote to Isabella in Mantua, explaining that he had extended his stay at Ferrara to please the duke, her brother: "The reason has to do with the painting of a room in which six fables (fabule) or histories (istorie) shall be placed. I have already found them and have presented them in writing." A letter from Alfonso, dated 14 November 1514, authorizes a final payment to Giovanni Bellini—undoubtedly for The Feast of the Gods—the first painting completed for the Alabaster Chamber.

The Feast represents a winter celebration presided over by the wine god Bacchus and mentioned in both Books I and VI of Ovid's calendar of Roman rituals. As depicted by Bellini and Titian, though, the scene differs in significant ways from Ovid's text. Mario Equicola must have consulted several other classical sources and many Renaissance commentaries upon them.

Over the next fifteen years, Titian added three more scenes: The Worship of Venus (Prado, Madrid), The Bacchanal of the Andrians (Prado, Madrid), and Bacchus and Ariadne (National Gallery, London). The Ferrarese court artist Dosso Dossi produced another large bacchanal and he also contributed ceiling decorations and a painted frieze for the cornice.

All the bacchanals in the Alabaster Chamber dealt with love, and some refer to marriage. Significantly in The Feast of the Gods, Bacchus is shown as a child. In classical antiquity, this fertility god was represented as four different ages to correspond to the changing seasons. He would be an infant in winter, at the start of the year. Other veiled allusions to both marriage and winter occur in The Feast of the Gods, which suggests—but does not prove—that Mario Equicola devised the theme as an allegory about the wedding of Alfonso d'Este and Lucrezia Borgia on December 30, 1501. The Este family lost control of Ferrara in 1598, and the Alabaster Chamber's paintings and sculpture were dispersed.

This small canvas was also commissioned by Alfonso d'Este for the Alabaster Chamber. It formed part of a series of ten paintings—all of the same height and all by Ferrara's court artist Dosso Dossi and his brother Battista Dossi—that ran continuously around the upper walls of the room, forming a frieze above the large canvases.

The series depicted the adventures of the Trojan hero Aeneas, venerated in Italy since antiquity as a founder of the Roman state. Aeneas' wanderings around the Mediterranean after the sack of Troy and his rise to kingship in Italy were immortalized in The Aeneid, an epic poem written by Virgil (70–19 B.C.).

Dosso's painting represents the episode when Aeneas and his friend Achates were shipwrecked off the coast of Libya and cast up at Carthage. The similarity of this picture's vivid green pigments to some of the repainted foliage in The Feast of the Gods confirm that Dosso was responsible for the first alteration to Bellini's masterpiece.