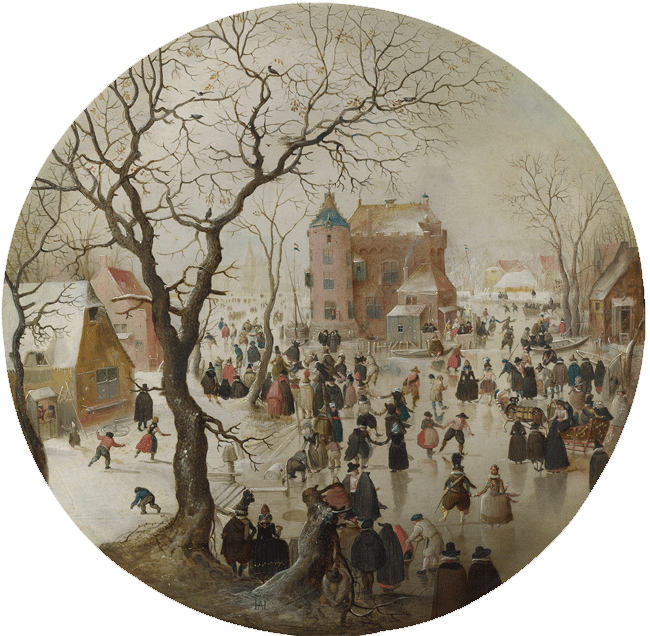 The vibrant paintings of Hendrick Avercamp (1585–1634) transport us back to a time when Dutch waterways regularly froze in the cold of winter. In his landscapes, people young and old, rich and poor, share both the joy and the hardship of the Little Ice Age. This climatic phenomenon, which peaked in the 17th and early 18th centuries, was characterized by extremely severe winters that arrived early and lasted well into spring. Avercamp's earliest dated painting, from 1608, came after a winter in which temperatures averaged well below freezing.

Born in Amsterdam and presumably trained there, Avercamp spent most of his childhood and adult life in Kampen, a small city far removed from that artistic center. His powers of observation may have been heightened by his disabilities—he was unable to speak and probably also unable to hear. He captured an astonishing range of human conditions and activities, from gentlemen playing colf on the ice, to children throwing snowballs, to gypsies telling fortunes. An excellent draftsman as well as painter, Avercamp also made numerous figure studies from life and elaborate, colored drawings that were meant to be framed and hung. This artist indelibly shaped our perception of the Dutch winter. His paintings and drawings of the bustle of life on frozen waters reveal much about 17th-century life in the Netherlands and the adaptability of the Dutch as they confronted the harsh realities of the Little Ice Age.

Winter landscapes evolved as an independent subject from pictorial cycles of the months or seasons, a popular theme in 16th-century Flemish art. The round format, the castle, and the festive skaters all reflect the work of Flemish artists who had moved to Amsterdam in the late 1500s. 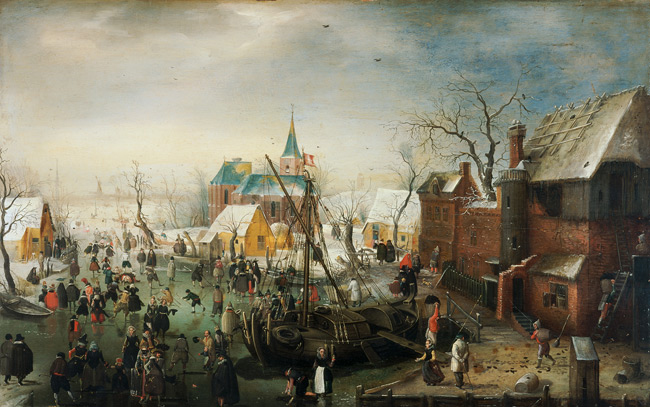 In almost all of his winter paintings, Avercamp depicted people at work among those at play on the ice. Here laborers carry peat, an important source of fuel for heating, from the boat to the building on the right. 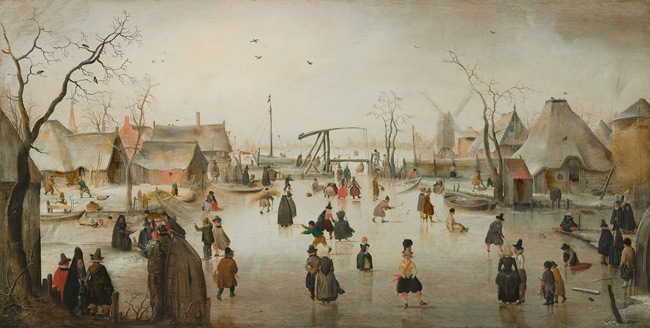 The anecdotes that fill Avercamp's paintings bring the scenes to life. At the far left, a man rushes to grab a ladder to aid skaters who have fallen through the ice.

Ice Skating near a Village, c. 1610, oil on panel, Royal Picture Gallery Mauritshuis, The Hague, on long-term loan from the Rijksmuseum, Amsterdam 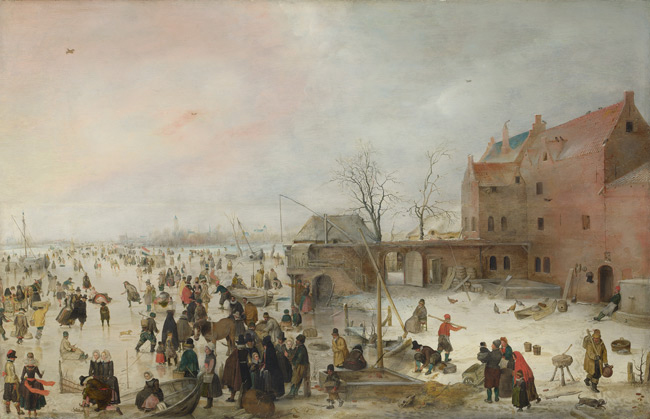 A diverse crowd of fancy folk and workers take to the ice in this engaging composition. To the right a seated old man watches the lively scene before him. Similar aged figures appear in many of Avercamp's winter paintings. In Dutch and Flemish artistic traditions, seasons were often associated with the stages of life, with winter compared to old age.

A Scene on the Ice near a Brewery, about 1615, oil on panel, The National Gallery, London

Most of the settings in Avercamp's winter scenes are imaginative evocations of Dutch waterways, towns, and villages, although the artist often incorporated landscape and architectural elements that he had drawn from nature. For example, the wooden lift-bridge was a typical Dutch structure, seen along canals and rivers. 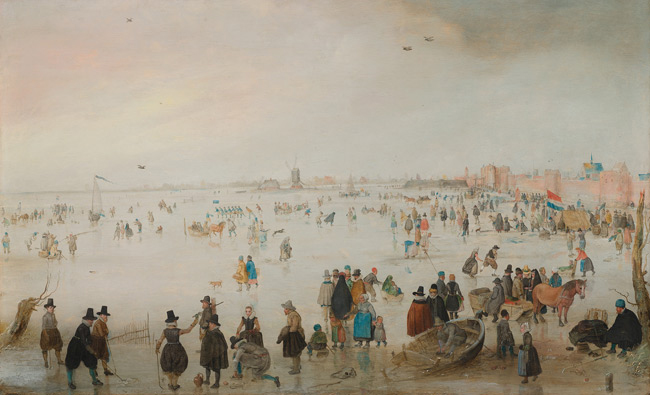 Kampen was a port of trade on the Zuider Zee, a large inland sea. The player in the left foreground leaning on his colf stick and looking toward the viewer may be the artist himself; a similar red-bearded figure also gazes out of several other paintings by Avercamp.

Winter Scene outside the Walls of Kampen, c. 1613–1615, oil on panel, Private collection, The Netherlands 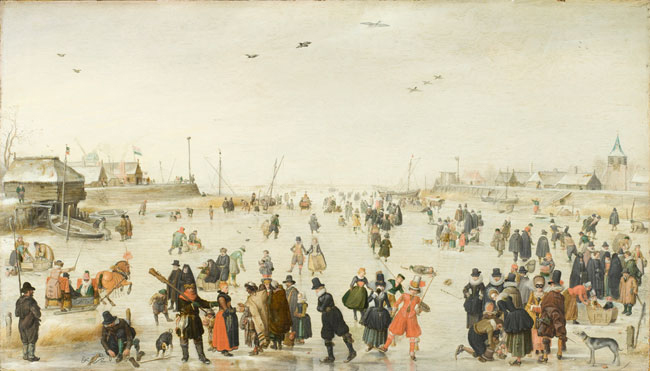 Avercamp based his figures on studies he made from life; he then replicated and recombined them in different ways in his paintings. The woman wearing a mask in the foreground at right reappears in Skaters and Tents along the Ice (no. 8). 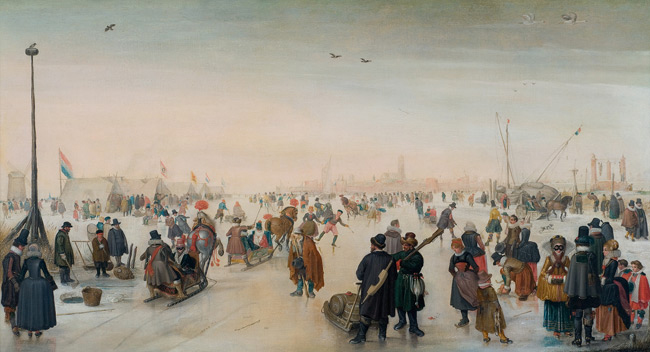 Plunging temperatures meant waterways froze solidly enough to act as roads, with sleighs and sleds joining skaters on the ice. As seen in this view, Dutch vendors moved their businesses into tents on the ice and offered snacks and warmth to all. The contrast between social classes is often striking: here a beggar and fishermen silently watch elegant figures pass by in horse-drawn sleighs.

Skaters and Tents along the Ice, c. 1620, oil on canvas, Frans Hals Museum, Haarlem, on loan from private collection 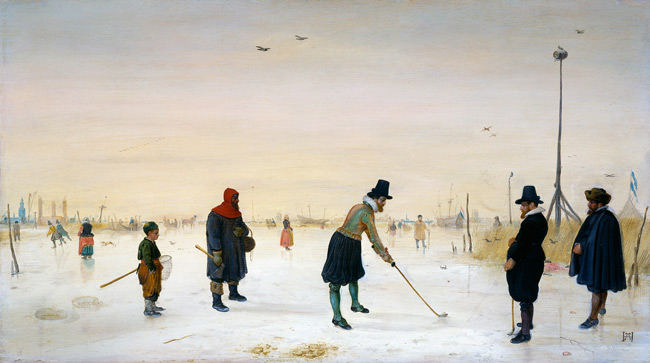 Colf, an early form of golf, was typically a gentleman's game and a winter favorite. In the most popular version, players tried to hit a ball toward a pole using as few strokes as possible. In this painting, Avercamp emphasized the social and economic contrast between the elegantly dressed colf player and the heavyset fisherman and his apprentice, who watch intently. 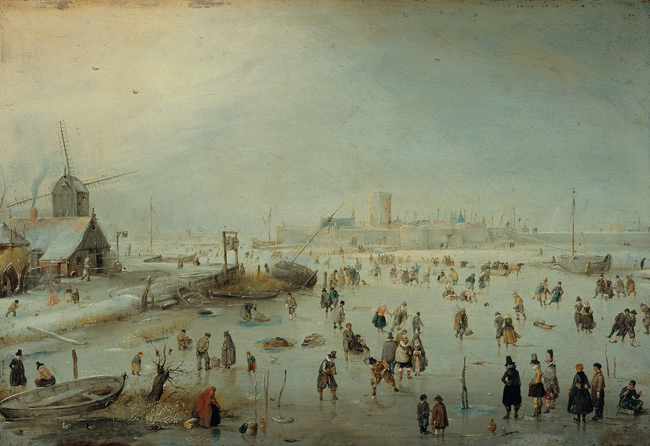 In addition to making preparatory studies for paintings, Avercamp produced finished drawings for the art market. The refined composition and the careful use of watercolor and gouache to define the figures and create atmospheric effects suggest that Avercamp intended this drawing to be framed and hung on the wall.

Winter Games on the Frozen River Ijssel, c. 1626, pen and black and gray ink with watercolor, gouache, and graphite on laid paper; laid down, Woodner Collection, Gift of Andrea Woodner, 2006.11.3 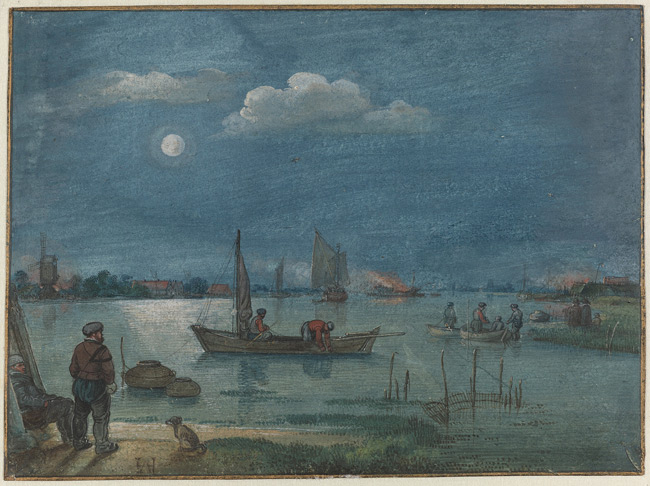 With its bold coloring and nighttime setting, Fishers in the Moonlight is one of Avercamp's most daring and innovative works. The fine white lines he used to create reflections capture the gentle glow of moonlight on the water.

Fishers in the Moonlight, c. 1620, pen and ink, watercolor and gouache, Rijksmuseum, Amsterdam 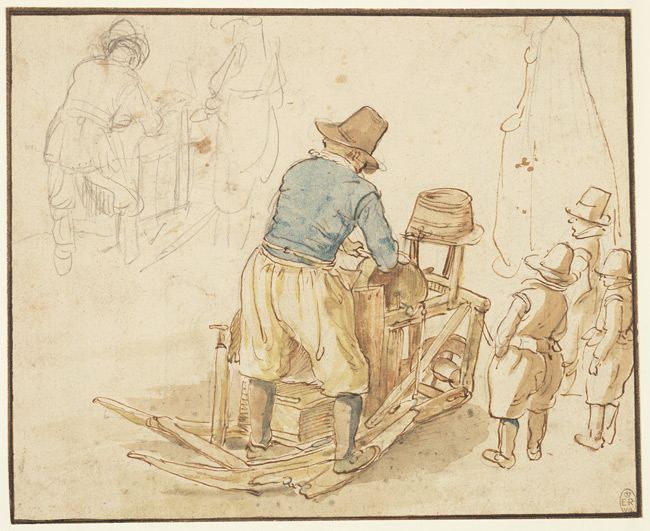 Avercamp must have drawn often from life, although surviving examples of such drawings are rare today. One may well be the light sketch in the upper left corner of this sheet. After quickly drafting it, Avercamp reworked the scene, using watercolor to give body and shape to the figure of the craftsman and adding three little boys who are mesmerized by his task. 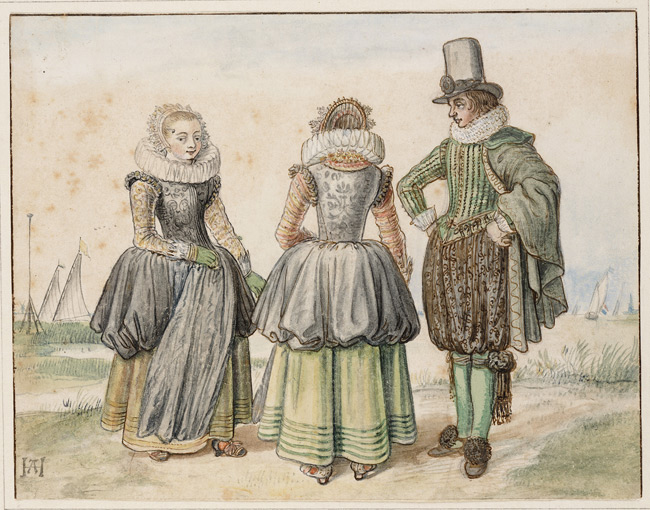 In addition to sketching from life outdoors, Avercamp made costume and figure studies in the studio. He apparently kept an abundant supply of these studies on hand, for the same individuals recur in his paintings and drawings, often with slightly altered poses or dress. Each figure in this watercolor, for example, originated in a separate, less meticulously finished study; Avercamp simply combined and placed the three in an outdoor setting.