Celebrating 60 Years of the National Gallery of Art West Building

March 2001 marked the sixtieth anniversary of the opening of the National Gallery of Art. A gift of Andrew Mellon to the American people, the original West Building, designed by famed American architect John Russell Pope, was constructed between 1937 and 1941.

In these photo essays you'll view comparative images that demonstrate the many ways, some subtle, some obvious, in which the National Gallery's West Building--and the environment that surrounds it--have changed through the years. 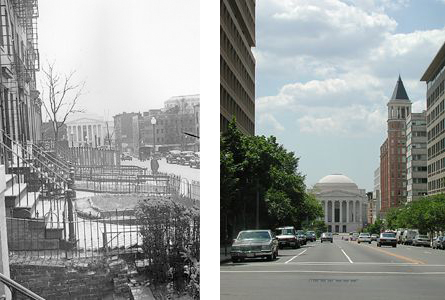 North Facade
Sixth Street, a north-south thoroughfare, was closed in 1937 at Constitution Avenue for construction of the original West Building of the National Gallery of Art. Since then, large office buildings gradually have replaced small-scale brick row houses on Sixth Street as the urban core of the city has evolved. The grand north facade of the West Building remains as a dramatic terminus for this urban vista.

(right) Constitution Avenue facade of the West Building of the National Gallery of Art, seen from Sixth Street NW, 2001 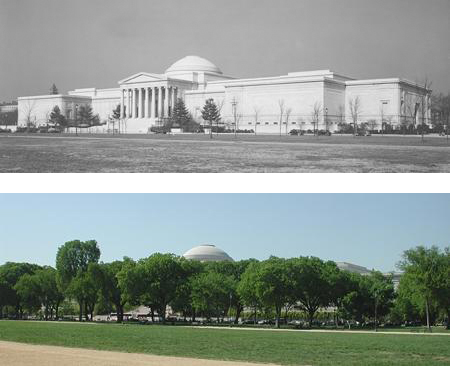 Mall Facade
Parallel rows of young elm trees were planted to flank the national Mall during the late 1930s, while the West Building of the National Gallery of Art was under construction. Since then, more trees have been planted and several of the streets on the Mall have been replaced by gravel paths. The elm trees have grown so tall that they now almost obscure the West Building from some points of view during the summer.

(top) South facade of the West Building of the National Gallery of Art, seen from the Mall, 1941

(bottom) South facade of the West Building of the National Gallery of Art, seen from the Mall, 2001 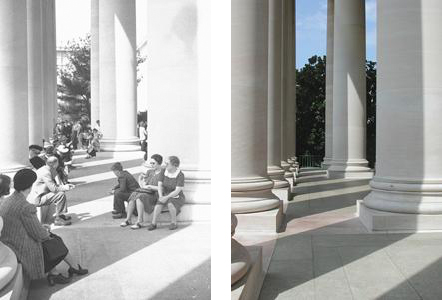 Mall Entrance
Reflecting his beaux-arts training, architect John Russell Pope gave particular attention to the approaches and entrances to the West Building. From the Mall, a broad staircase leads to a colonnaded porch and the building's main entrance. In May 1941 visitors sat among the columns, waiting for the doors to open. Sixty years later, the columned porch awaits a new generation of visitors.

(left) View of the south porch of the West Building, 1941; photograph Jack Hyams

Exhibition Rooms
Exhibition rooms in the West Building were designed to be harmonious settings for works of art. To accomplish this, the architectural details in each gallery reflect the place and period that produced the art displayed in it, so that the room itself becomes a second frame for the paintings. Galleries 48 and 51 were finished with wood paneling to evoke the homes and style of the Dutch seventeenth century. When the museum opened in 1941, A Polish Nobleman and other works by Rembrandt and his circle from the Mellon Collection hung there. In 2001, A Polish Nobleman, now reframed, hangs in the same location. One of the new Dutch Cabinet Galleries, completed in 1995, can be seen through Gallery 48.

Sculpture Halls
Dramatic sculpture halls extending to the east and west of the central Rotunda establish the monumental core of John Russell Pope's design for the West Building. In 1940 two large marble urns by Clodion were acquired to articulate the dramatic space of the East Sculpture Hall. Sixty years later, the urns, part of the Andrew Mellon Collection, remain in the same location, joined by other sculptures and decorative plants. 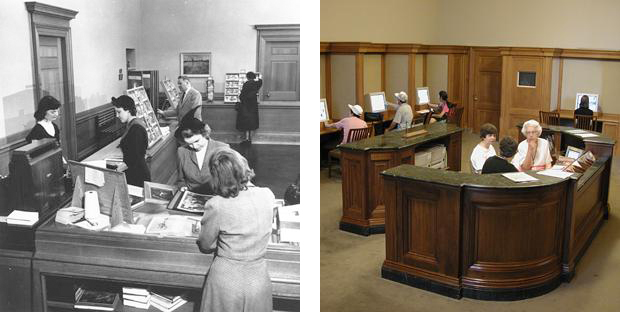 Information Room
In 1941 books, catalogues, color reproductions, and postcards were made available for sale to the public at modest cost in an Information Room adjacent to the Mall entrance. The publications were intended to promote public study and appreciation of the arts. The room now holds several computers that offer access to the Gallery's Web site; occasional special installations related to the Gallery's history; maps; foreign-language brochures; schedules of daily tours for both the East and West Buildings; and other informative literature. 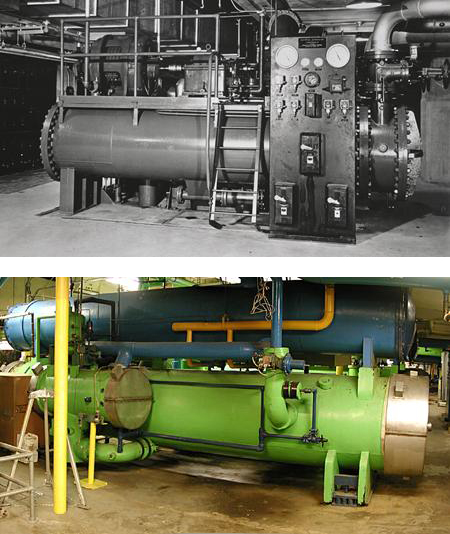 Air Conditioning
The West Building was planned and constructed with the most modern mechanical systems available at the time. It was among the first museums in the world to include air conditioning as an integral part of the design. Elaborate equipment provided a continuous flow of air to manage temperature and humidity throughout the building. Though now modernized, the system was so effective that it was extended to the East Building and remains in use today.

(top) One of the original West Building refrigerating compressors, 1941 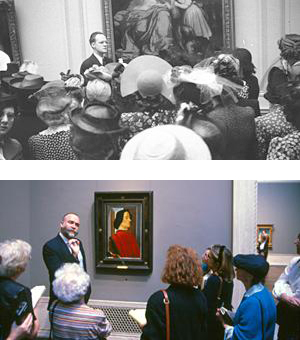 Guided Tours
Since the Gallery's opening, lecturers have offered popular gallery tours to the public. During the museum's first year, the demand for these presentations was so great that their number was doubled.

Sixty years later, gallery tours continue to be an important part of the museum's interpretive programs. Introductory tours of the collection and talks on individual paintings are offered several times each day and can be heard in French, German, Italian, Japanese, Russian, and Spanish.

Individual Audio Tours
In 1958 the National Gallery of Art became the first art museum in the United States to offer individual audio tours to the public when it implemented the innovative LecTour system after years of trials. For 25 cents, visitors could borrow a small radio receiver and an earphone mounted in a small disposable cardboard box. Continuous radio signals were picked up by antennas in the gallery floorboards. Now, thanks to new technologies, visitors can use hand-held digital audio players to create their own customized tours through the museum's exhibition rooms.

(left) Using the LecTour system, visitors listen to commentary about Right and Left by Winslow Homer, 1962 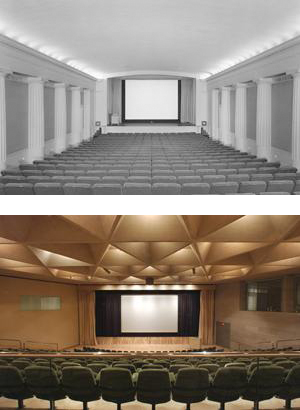 Auditorium
When the National Gallery of Art opened to the public, an elegant classicizing auditorium on the ground floor of the West Building provided a locale for public lectures, films, and slide shows. During the next four decades, the auditorium was the site of presentations by members of the Gallery's staff and well-known visiting lecturers, including Kenneth Clark, Isaiah Berlin, Steven Spender, and H. W. Janson. In 1978 programs were moved to a larger, technologically-advanced auditorium in the new East Building, designed by architect I. M. Pei. 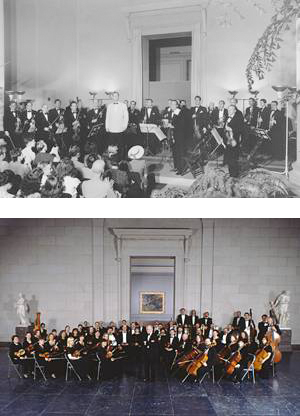 Music
Since 1943 the National Gallery of Art has continuously presented free, privately-funded Sunday evening concerts for the public. Over the course of nearly six decades an extraordinary range of performances has included orchestral and solo concerts from medieval monody to modern jazz. Two long-serving music directors have overseen music at the museum: first Richard Bales, who served from 1943 to 1985, and then George Manos, who assumed the position in 1985.

(top) Richard Bales and the National Gallery Orchestra in the East Garden Court, 1948

(bottom) George Manos and the National Gallery Orchestra in the East Sculpture Hall, 2001 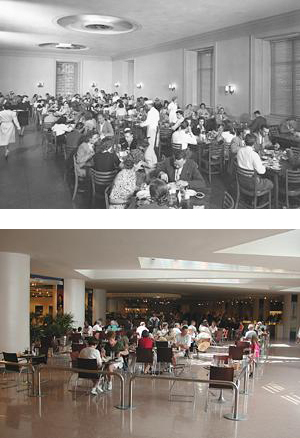 Eating Facilities
Since the museum first opened to the public, food facilities have offered guests refreshments and the opportunity to relax and socialize during their visit at the Gallery. The original West Building ground floor cafeteria, which opened in 1941, remained almost unchanged for decades. It now has been replaced by other eating facilities including the concourse café and espresso bar, which mirror the growth of the Gallery's campus and reflect the changing tastes of Gallery visitors, from Jell-O to gelato.