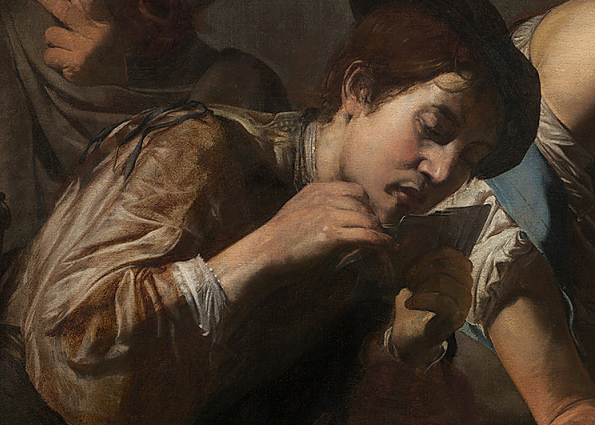 The dupe: a young man is engrossed by his cards, oblivious to the activity around him. His soft, pink silk shirt, adorned with lace and ribbons, and fair, smooth skin give him away—he appears to be wealthy but also inexperienced. It is getting late. Dark circles begin to shroud his eyes, the shadow of a beard circles his mouth, and locks of hair fall over his forehead. 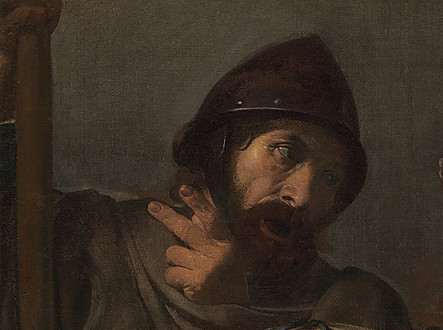 The accomplice: a nefarious figure leans forward from the back of the room to read the young man’s hand. He juts two fingers from beneath his cape, signaling the cards’ contents to his partner. 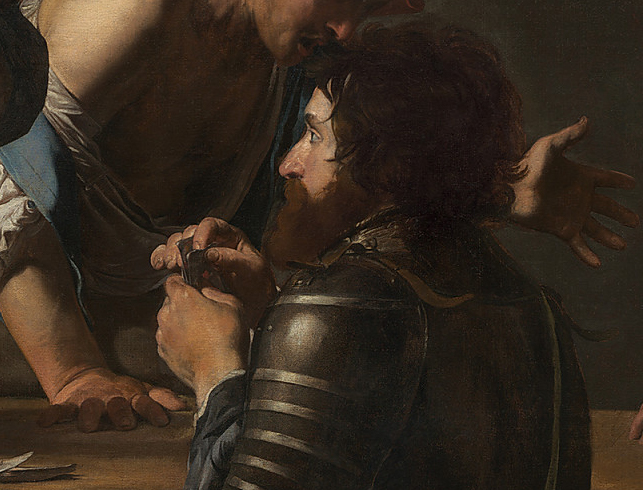 The cheat: he is sitting upright, tense, and alert. His stony face conceals the deception. 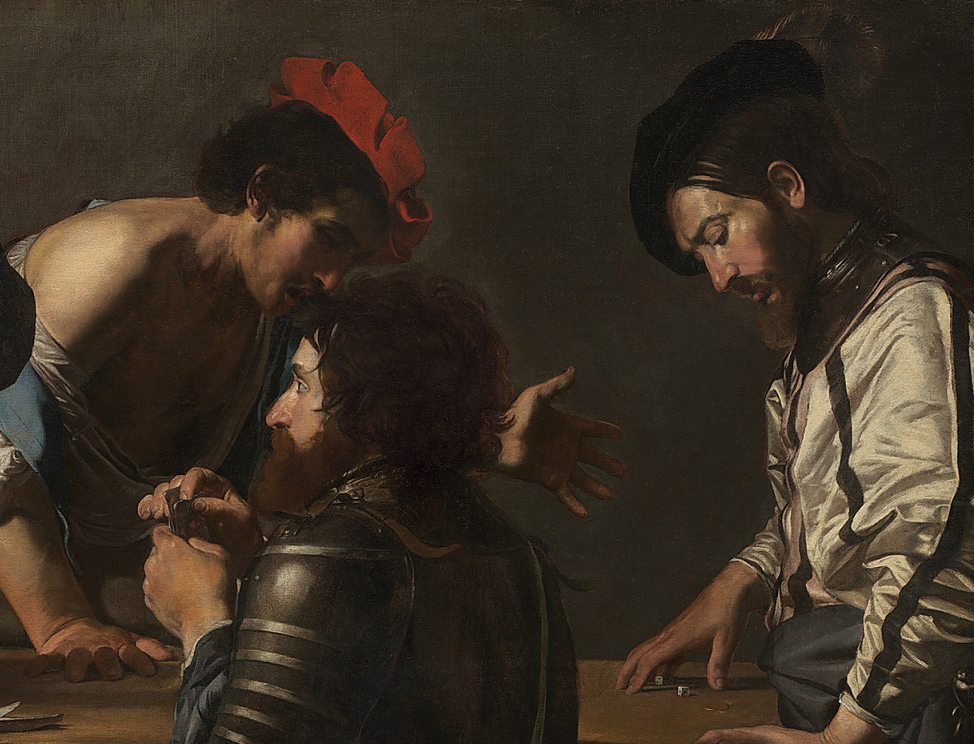 The rogues: next to the cardplayers two men play dice. The man in the red cap—dirty, red-nosed as though he has been drinking—gestures vigorously. Has he just rolled the dice or is he arguing? 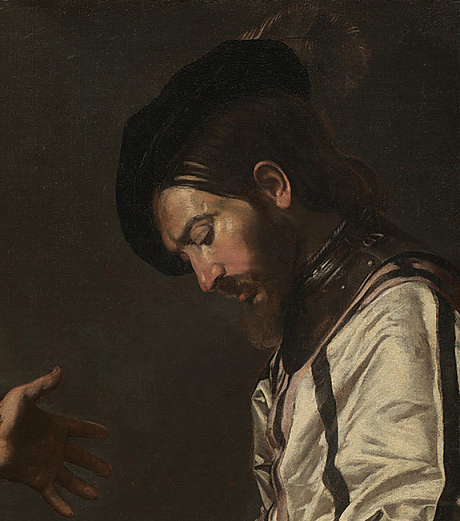 His opponent contemplates the dice wearily. Is he completely resigned, defeated, or close to an angry outburst? 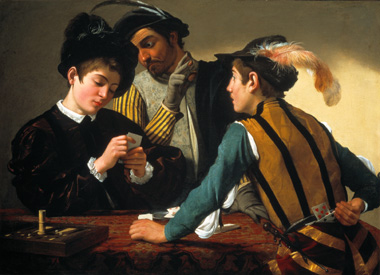 First translated into paint by the Italian master Caravaggio, images of cardsharps and cheats became immensely popular in the early seventeenth century. The narrative itself held dramatic appeal, but these paintings also carried various meanings and associations for a seventeenth-century audience.

Cardplaying was illegal but became highly popular throughout Europe during the sixteenth century. Lucas van Leyden was among the first to represent the subject in art. Here a group of upper-middle-class citizens plays a popular game called primero. The gentleman holding the ace of spades—the wild card—points to a pile of money in anticipation of his winnings. Van Leyden presents a titillating glimpse of men and women participating in illicit activity. 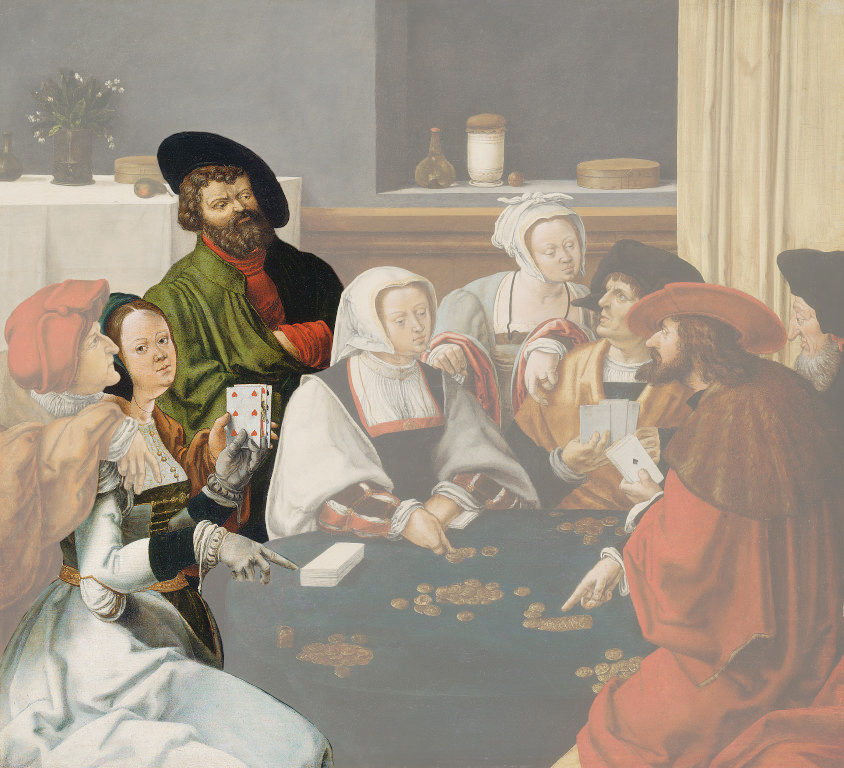 The image also carried a moral message. Large sums of money have been wagered. The man in the background who holds his hand in his cloak is an emblem for laziness (Proverbs 19:24, “A slothful man hideth his hand in his bosom”). The woman at the left who looks confidently out at the viewer warns against the seductive powers of women: pointing to the money and revealing the hearts in her hand, she will win the game of love.

Lucas van Leyden presents both the allure and the dangers of cardplaying—themes that are present in almost all images of cardplaying in the seventeenth century. 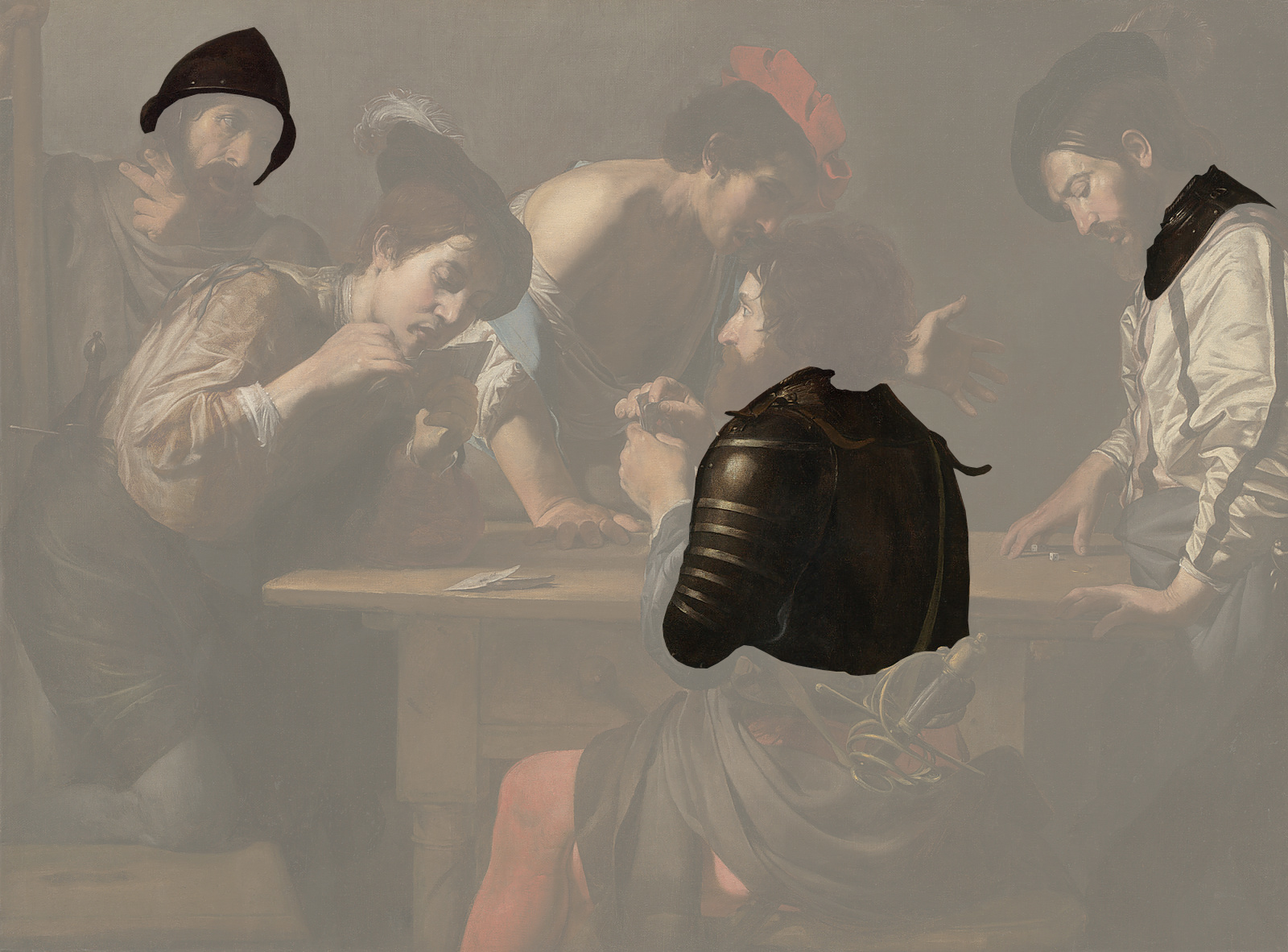 Incessant warring throughout the sixteenth century produced a large population of rough, arrogant, only sporadically employed soldiers. These “bravos” idled about Rome, gambling, dueling, drinking, and womanizing. Each man in Valentin’s painting wears one part of a single uniform—a helmet, a breastplate, or a gorget. These men are mercenaries who had to forage for their armor and often dressed in an irregular fashion. Most seventeenth-century images of cheating cardplayers depict such gambling soldiers.

Images of cardplaying also came to be associated with the Prodigal Son, the biblical story of a young man who fell in with bad company, squandered his fortune, and later returned to his father to repent and ask forgiveness. Artists traditionally portrayed the emotional climax of the story, when father and son are reconciled, as the seventeenth-century Spanish artist Bartolomé Esteban Murillo has done here.

In this print, however, the French artist Jacques Callot depicts the Prodigal Son still reveling with a group of soldiers and women. An inscription warns against dissolute behavior.

About 1590, the Prodigal Son story was recast as a scene from contemporary life. Valentin's painting belongs to this tradition. While not overtly religious, its warning against the dangers of corruption and sin would have been clear to any seventeenth-century viewer. 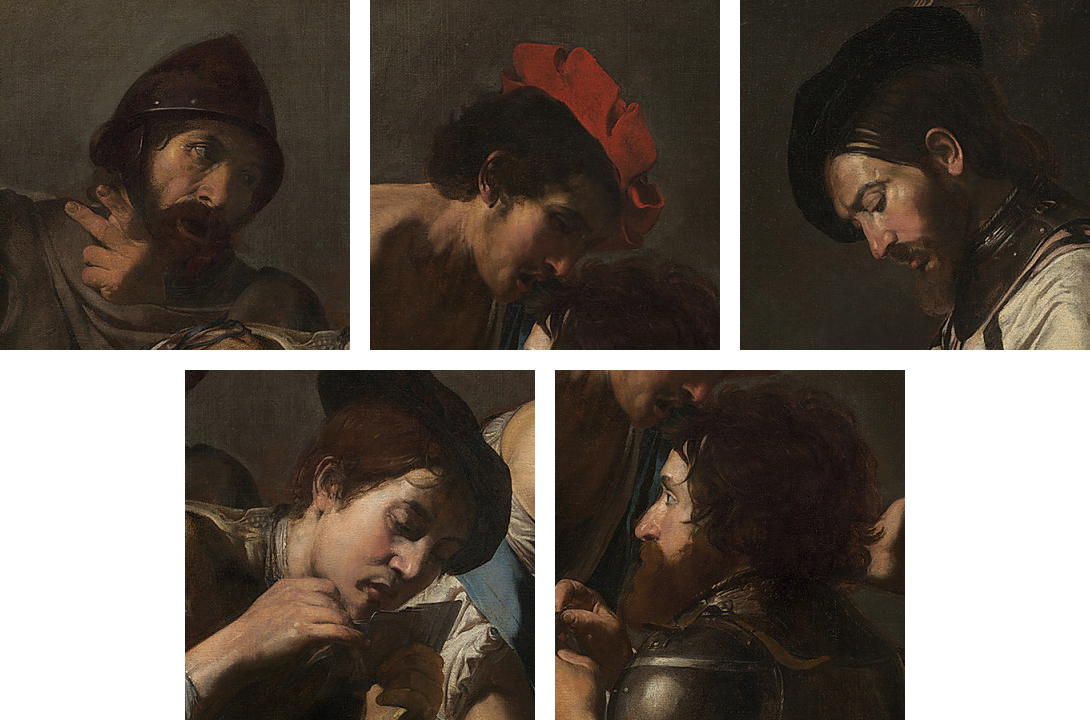 Valentin’s figures are unflinchingly real: they wear the dirt, sweat, and desperation of Roman street life. His painting style—thin with rapid brushstrokes, subtly painted textures, and no underdrawing—adds to the sense of spontaneity.

At the same time, the gestures and expressions of the figures are overstated. The accomplice, for example, signals in an obvious, posed way as if he were a character in a drama who wants to be sure the audience follows the plot. 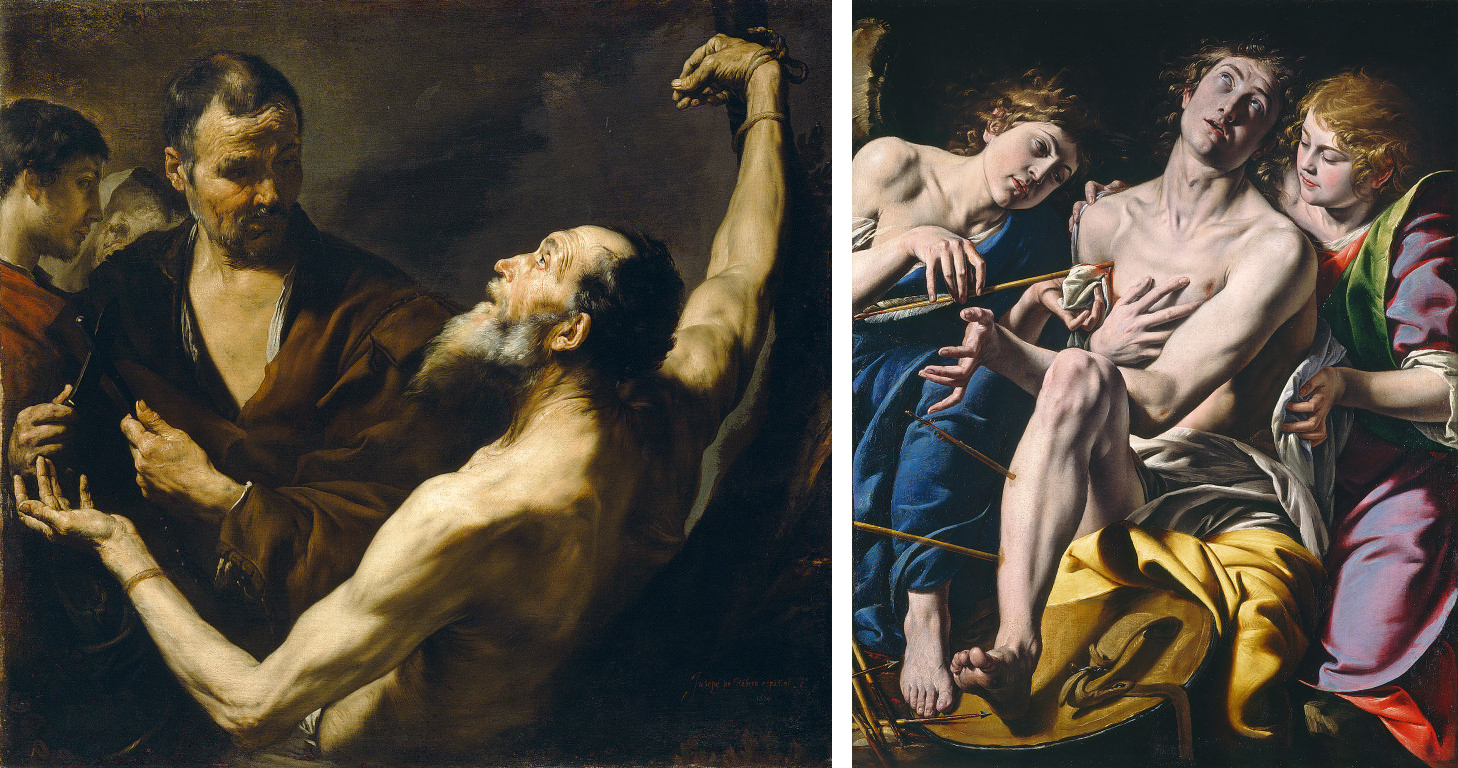 The direct style of these paintings is typical of Counter-Reformation art. After the Protestant Reformation, the Catholic Church also launched a series of reforms, now known as the Counter-Reformation. Painted images played an important role in conveying the message of the church to a largely illiterate audience, and Catholic leaders instructed artists to make sensuous, clearly intelligible, and emotionally charged paintings that viewers could easily understand. These two martyred saints are inescapably realistic. Valentin brings the realism and passion of the period’s overtly religious narratives to his image of the cardsharps. 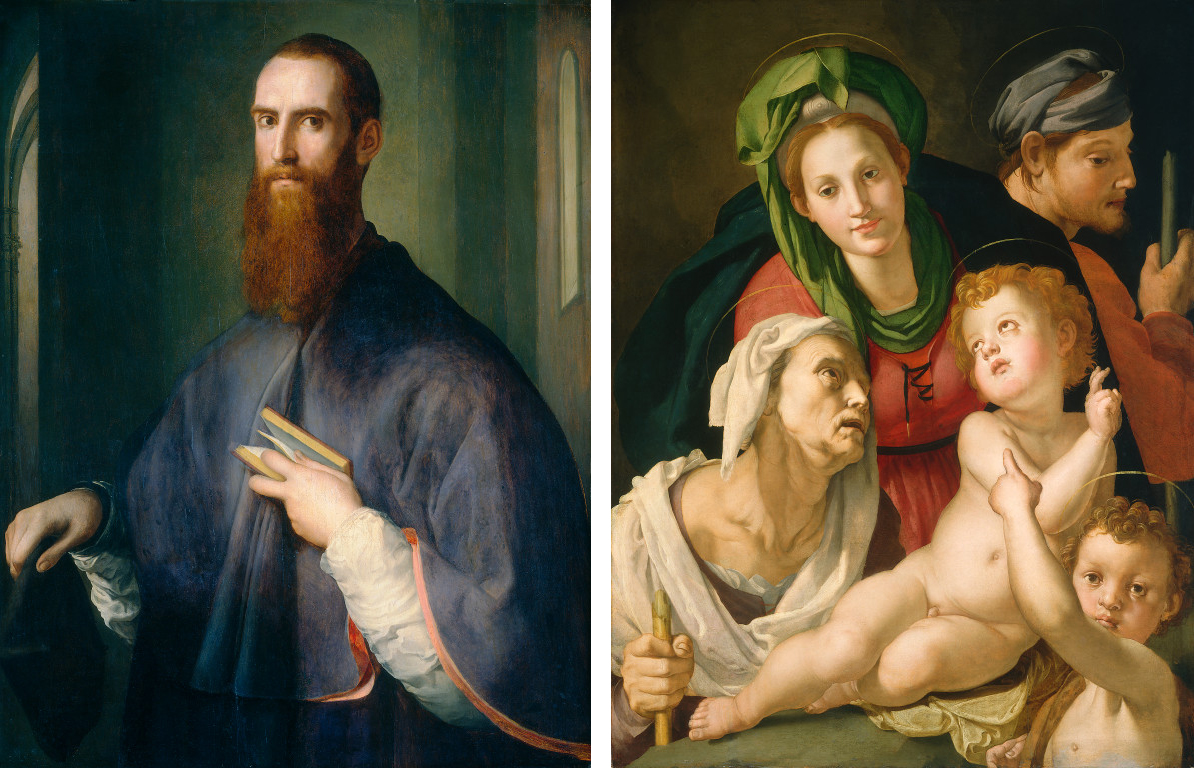 Valentin de Boulogne was a Frenchman who spent his entire career in Italy. Born near Boulogne, France, to a family of artists, little is known about his early life and work. Like most French artists of his generation, he was probably trained in the Italian mannerist style, which had spread through Europe by the end of the century. These two sixteenth-century Italian works are typically mannerist: with their elongated figures and unnatural colors, they appear artificial and esoteric. 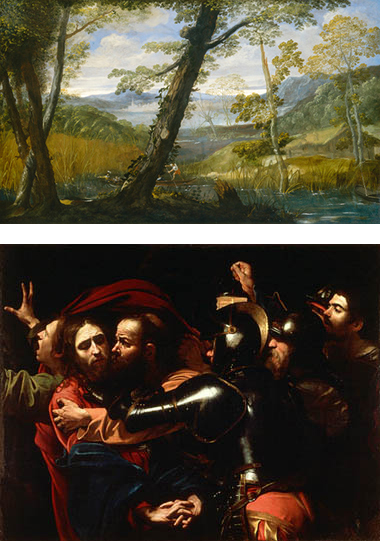 By the beginning of the seventeenth century, young artists from all over Europe flocked to Rome. Valentin made the trip sometime between 1611 and 1620. There he discovered artists who had moved away from mannerism toward a powerful, direct style, rooted in observation of the natural world. Two contrasting versions of this approach emerged: one classical and idealized, first practiced by Annibale Carracci and his family, and the other earthy and dramatic, pioneered by Caravaggio.

Most of the great French artists of the seventeenth century trained in Rome and gravitated toward one of these two styles.

(bottom) Caravaggio (Michelangelo da Merisi), The Taking of Christ, 1602, © Courtesy of the National Gallery of Ireland and the Jesuit Community, Leeson Street, Dublin, who acknowledge the generosity of the late Dr. M. Lee-Wilson

Annibale Carracci, his brother Agostino, and their cousin Lodovico established an art academy in Italy to promote a rational, forthright naturalism steeped in classical models.

In returning to nature, the Carracci created the first pure Italian landscapes, such as Annibale Carracci's River Landscape.

Two of the greatest French painters of the seventeenth century, Nicolas Poussin (1594-1665) and Claude Lorrain (1600-1682), followed the Carracci. These two artists, lifelong friends, were established in Rome by the 1620s and stayed there throughout their careers.

In works such as this one, Claude invented an idealized landscape. Grounded in nature, he has transformed this depiction of the Italian countryside into a timeless image of tranquil, ordered beauty. His lyrical, poetic works were much sought-after in his own lifetime.

Poussin illustrates the sacrament of baptism in another idealized landscape. The proportions of the figures are robust and the composition is balanced, despite the figures’ complex poses. 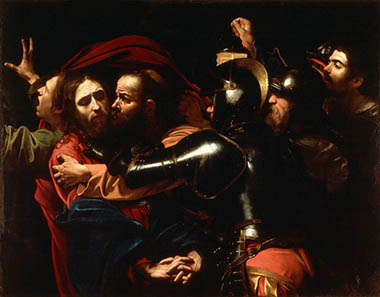 Caravaggio’s few scenes of contemporary lowlife—cheats and fortune tellers—were immensely influential, and other artists repeated these subjects throughout the seventeenth century. Caravaggio also interpreted religious stories, such as The Taking of Christ, as scenes from everyday, contemporary life. His figures, often modeled on local ruffians, are intensely human. Strong contrasts of light and shade (called chiaroscuro), often used within a plain, dark setting, give his works a concentrated, theatrical power.

Caravaggio (Michelangelo da Merisi), The Taking of Christ, 1602, © Courtesy of the National Gallery of Ireland and the Jesuit Community, Leeson Street, Dublin, who acknowledge the generosity of the late Dr. M. Lee-Wilson

Simon Vouet, one of Valentin’s colleagues, had arrived in Rome by 1614. The two artists lived near each other in the parish of San Lorenzo. In Vouet’s painting, the dramatic lighting, earthy colors, and the saint’s unidealized body show Caravaggio’s influence.

In 1627 Louis XIII called Vouet to Paris to become his chief artist. His work changed considerably to satisfy the tastes of the French king. The Muses Urania and Calliope, for example, is idealized and suffused with light.

Georges de la Tour, one of the few important seventeenth-century French artists who did not visit Rome, was another follower of Caravaggio. He developed his unique and powerful style by studying the prints and paintings of Caravaggio’s many international followers.

La Tour’s The Repentant Magdalen shows Mary Magdalen by candlelight contemplating human mortality. Mary Magdalen was a popular saint in the seventeenth century. She had led a life of sin before converting to Christianity, and her story lent itself to the gritty reality that so many artists favored.

Valentin was one of Caravaggio’s greatest followers. Dramatic lighting, quick brushwork, and earthy characters express the drama and emotion of his secular and religious subjects.

By the late 1620s, Valentin was receiving commissions from prominent patrons. He painted scenes of contemporary lowlife, religious subjects, allegories, and portraits. From 1629, he is referred to in documents as “Signor Valentino” and apparently employed servants in his house. His career was cut short, however. He purportedly led a bohemian life and finished a night of carousing with a dip in a fountain. He caught a chill and died at the age of forty-one. About seventy-five of his paintings survive today.