Sculptor and Painter of Renaissance Florence 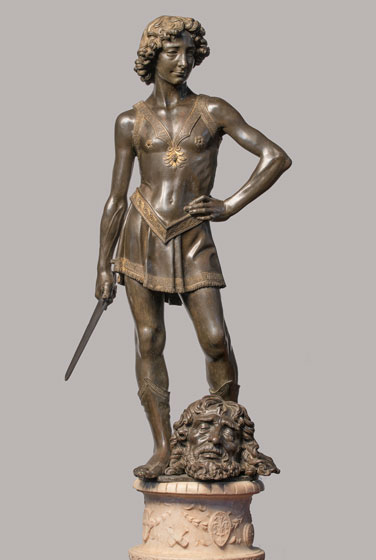 The biblical king David could be represented as a venerable monarch or as the shepherd boy who saved his people by felling a giant. David’s youthful role as savior was popular with the Florentines, who saw themselves as triumphant, with God’s help, in wars against other Italian city-states. Verrocchio’s David has a lively pose, a vigilant gaze, and golden hair. The tunic fitting tightly over his slender torso suggests ancient armor, and the pseudo-Arabic inscriptions in the borders evoke the Holy Land in biblical times. Verrocchio treated the grimacing face of Goliath with remarkable compassion. The stone, now missing, that David used to kill him was made separately and attached to the giant’s forehead.

A bronze statue for a private patron was a luxury even in Verrocchio’s time. By commissioning this one, Piero de’ Medici would have placed Verrocchio in competition with the celebrated older master, Donatello. The family already owned Donatello’s earlier David, the first freestanding nude sculpture cast in bronze since antiquity. Through association with the biblical David, the Medici proclaimed themselves righteous rulers and protectors of Florence. 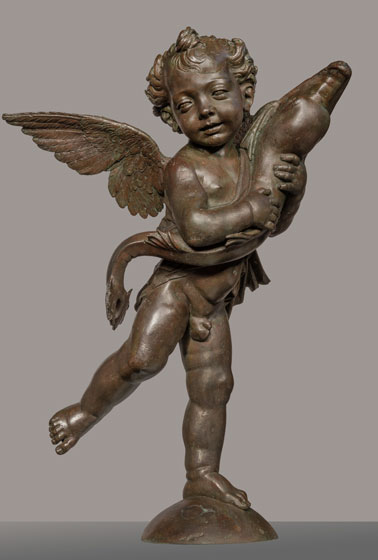 This is the first Renaissance sculpture created to be equally beautiful from all angles as the viewer moves around it. The putto’s damp hair and clinging tunic, along with the dolphin he clutches, imply that he has just emerged from water. He once stood atop a fountain at a Medici villa, and later on a courtyard fountain at the Palazzo Vecchio in Florence. Wings suggest he is Cupid, the infant god of love. His complex, twisting movement was further explored by Leonardo da Vinci and numerous sixteenth-century artists.

This proud young man in fanciful armor has been convincingly identified as Giuliano, younger brother of the de facto ruler of Florence, Lorenzo the Magnificent. The bust may have been a model for a marble portrait, or part of festive decorations on the occasion of a joust in 1475, celebrating Giuliano’s entry into public life at age twenty-two. Surviving traces of color indicate the clay bust was once painted. As with the marble relief of Alexander nearby, a mask on the breastplate screams defiance at enemies and contrasts with the wearer’s calm demeanor.

This beautiful portrait is the first freestanding marble bust of a half-length figure since antiquity and the first to include the arms and hands. The sculpture implies a narrative: the woman appears to advance toward the viewer and she holds flowers either just received or intended for her admirer. The bust finds a literary context in poems by Lorenzo de’ Medici in which lovers exchange gifts of flowers. Possibly the sculpture portrays the noblewoman Lucrezia Donati, beloved by Lorenzo who wrote sonnets praising her long, beautiful hands holding flowers. 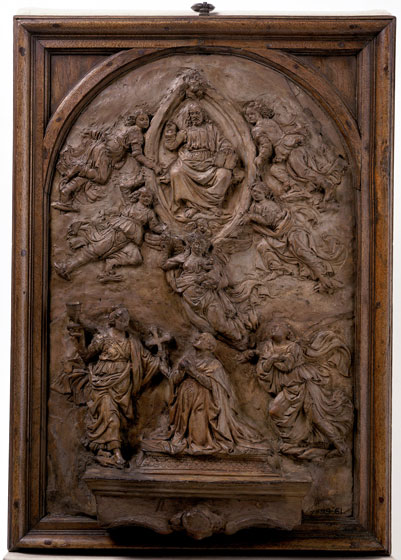 This small clay sculpture is one of the few sketch models to survive from the early Renaissance. Verrocchio in 1476 won the commission for a multifigure marble project for the Cathedral of Pistoia (near Florence) by submitting a design, possibly this relief. It shows Christ enthroned amid angels, blessing the Cardinal who kneels among the virtues Faith, Hope, and Charity. 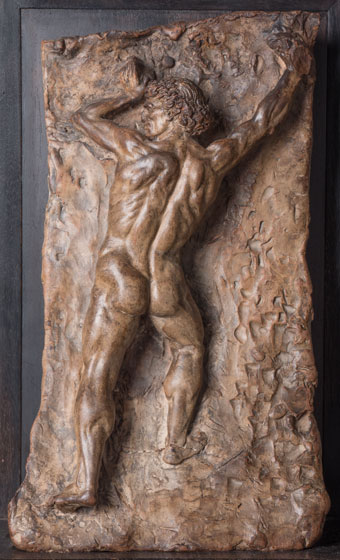 This rare clay model belongs to the design process for Verrocchio’s chief surviving work in precious metal, a silver relief to adorn the large altar of the patron saint of Florence, John the Baptist. Verrocchio would have developed the figure in clay based on a living, nude model who posed in the workshop, gripping a rag rather than the sword of the final version.

Andrea del Verrocchio, Model for the Executioner in the “Beheading of Saint John the Baptist” relief of the Silver Altar of the Baptistery, 1477/1480, terracotta, Private collection

Alexander the Great loomed large among the kings and generals of classical antiquity whose images Renaissance rulers prized. Verrocchio’s sixteenth-century biographer Giorgio Vasari mentions a pair of metal reliefs depicting Alexander and the Persian king Darius, sent by Lorenzo de’ Medici as diplomatic gifts to the King of Hungary. If Vasari, describing sculptures he had never seen, was mistaken about the material, this relief could be one of them. The enraged face on the breastplate contrasts with the calm beauty of the young warrior. An assistant, working from a clay model or drawing by the master, may have helped carve the armor’s rich ornament. 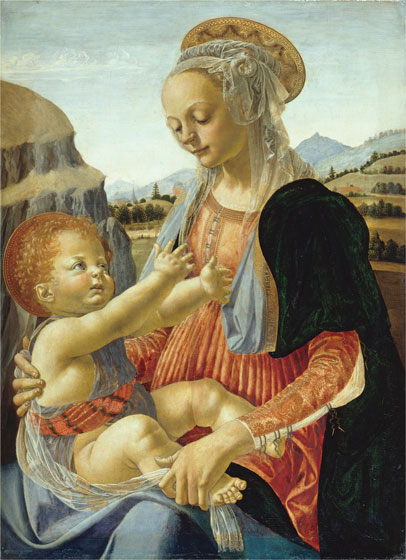 One of two paintings universally accepted as by Verrocchio, this Madonna and Child serves as a touchstone for his career as a painter. The figures are remarkable for their sense of volume, as if he has transported the solidity of his sculpted Madonnas onto panel and paint. Flesh tones are created with the innovative use of the soft and subtle gradations of shading known as sfumato (from the Italian word for smoky). Many motifs found here, such as the Child’s piercing blue eyes, tight gold-streaked curls of hair, the striped cloth wrapped around his body, and the pose of the Virgin’s left hand, can be found throughout Verrocchio’s painted work. 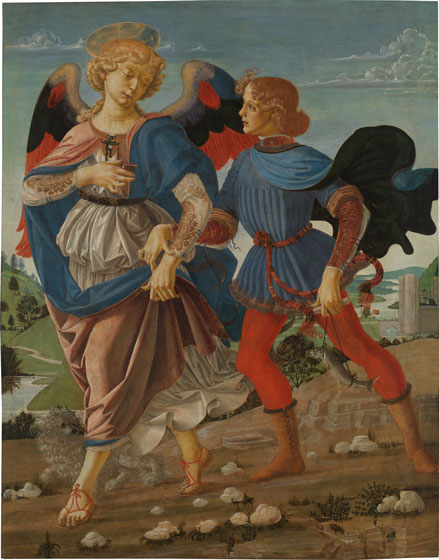 According to a biblical story, the blind Tobit sent his son Tobias on a mission to collect a debt. The angel Raphael protected the boy on his journey and told him how to use the innards of a fish to restore Tobit’s eyesight. The story was popular in late fifteenth-century Florence where merchants often sent sons on arduous journeys and hoped that they, too, would find guardians to protect them. The dynamic movement of the figures with their windblown draperies and the sculptural quality of their faces point to Verrocchio as maker, as does the lavish use of gold in the intricately patterned brocade sleeves. The little terrier with wavy curls, and the gutted fish with its shimmering scales and liquid eye, were painted by Verrocchio’s young apprentice, Leonardo da Vinci. 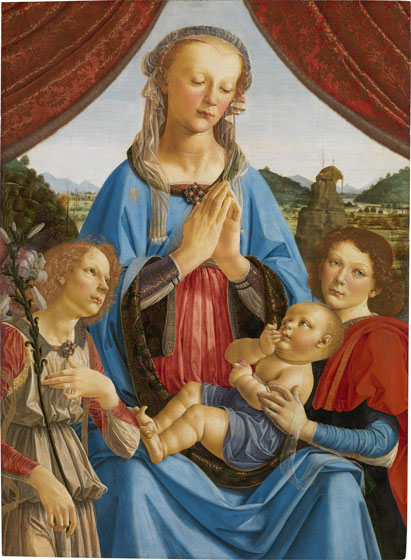 In a show of bravura painting, the lining of the Madonna’s cloak is a beautiful gold and green brocade that contrasts with the gold and blue pattern of her sleeve and the smooth blue silk of her outer mantle, a sophisticated play of color and texture that is a hallmark of Verrocchio. Equally refined are the jeweled brooches worn by the Madonna and the angel at left, reminders that Verrocchio initially trained to be a goldsmith. Verrocchio’s assistant Perugino may have painted the head of the Madonna and the angel on the right. The landscape and the angel at left holding the lily may be by another pupil, Leonardo.

Leonardo’s Ginevra de’ Benci transformed portraiture for centuries to come. Posed in front of a juniper bush, she appears in three-quarter view rather than in profile and likely was originally depicted with her hands folded at her waist before the painting was cut down at an unknown date. The back of the panel features a wreath of laurel and palm around a sprig of juniper, with a scroll that translates as Beauty Adorns Virtue. These plants symbolize her intellectual and moral virtues, while the juniper (ginepro in Italian) is a pun on her name. The painting was probably begun while Leonardo was still in Verrocchio’s studio, and can be compared to the master’s marble Lady with Flowers.