About Kara Walker's The Katastwóf Karavan

Hear ye! Hear ye! Sideshow-barker-in chief Walker, aka Miss Kara, requests your ebullient presence for a once (or thrice) in a lifetime event showcasing her Unique (but not all that Unfamiliar) CALLIOPE!

What is THE KATASTWÓF KARAVAN?

Funny you should ask that ‘cause I have the answer Right here in my back pocket! The Karavan, named for yours Truly, is an 8000-pound water-jet cut steel Cart, which houses a musical instrument. The instrument does all the work you see, the cart is its skin, its shell, its prison and mask. The cart is what warns the outside world of the presence of its volatile voice within.

Well, we here in the U S of A have never given a Name to the Event which has defined generations – we simply say “Slavery” as if that were a legitimate job instead of what it was, a Catastrophe for millions. Many other cultures in the world have given a name to the catastrophic historical events which traumatized and shaped who they are, often that word translates to “Catastrophe” in English, or katastwóf, in Haitian Creole. Haiti is a country formed by the only successful African Slave revolt in history, so it’s legit, I borrowed the creole for richness and style.

How will this Catastrophe Calliope play?

The Calliope plays with Steam, and is powered by a gas generated boiler which consumes a good quantity of Water. The Calliope can play as long as it has steam. The sound level cannot be adjusted so ear protection is recommended. Some of the songs are preprogrammed into the instrument which can be played remotely, however, two occasions in the program will feature Jason Moran, a living pianist of Prodigious Talent and Incorrigible Manners.

Yes, well, I instigated this, but let’s be fair to the workers for once, the Katastwóf Karavan and all its parts were made by hand entirely in the United States of America, yep, I said it. The Wheels come from Hanson Wheels in South Dakota, the Body was built at the Workshop Art Fabrication in Kingston, NY, the CALLIOPE was lovingly made by mister Kenneth Griffard in Michigan. Jonathan King cast and machined the bronze whistles from the propellers, rudders and shafts of old Chesapeake Bay workboats. Mike Koller Project Managed the Hell out of this thing and Jason Moran has become its first composer, player, and steam whisperer. I designed all the images on the cart and Adam Morosky and Jack Callahan have created midi files from my selection of Black Protest (and celebration) music from many eras.

What does it all Mean?

I was thinking a lot about music as the bearer of our emotional history, and about the way Jazz and gospel and African American Music are testaments to survival of our culture in the face of unrelenting, nihilistic “Progress” and how its regarded as a monument in American History etc. But also thinking about how the Industrial Revolution, the Steam Engine and Cotton ‘Gin were pivotal in usurping and grinding up the bodies of laborers and how much of that action, John Henry style, occurs today, with humans fighting uphill battles to prove themselves against the latest technology. Steam engines are quaint things of the past but industry presses on without us. How would it be if the old steam engines that ate us, swallowed too, our songs and pain, and what if, when its time was done, and slated for the scrapheap, the Steam Engine busted out an old spiritual in solidarity?

Kara Walker, excerpted and revised from brochure text for Prospect.4, 2018. 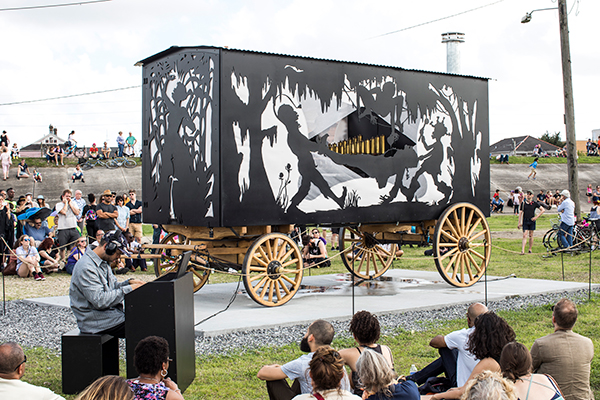 Experience our temporary installation of Kara Walker's The Katastwóf Karavan, a work incorporating a steam calliope, a musical instrument used in the 19th century on steamboats and in carnivals in the Sculpture Garden. Musician and artist Jason Moran will play the calliope live during special performances and join Walker for a conversation. 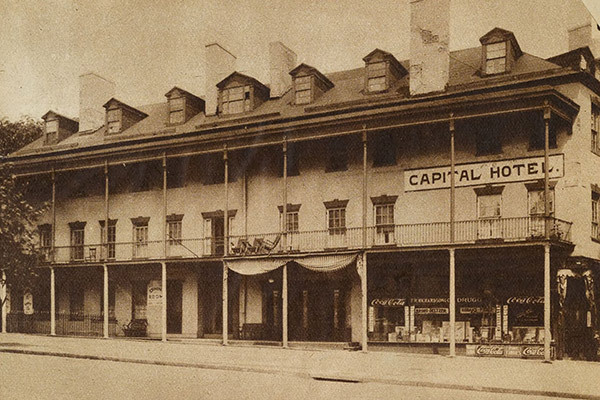 Join us in an outdoor procession to four historical sites of enslavement on or near the National Gallery campus. Registration is required. 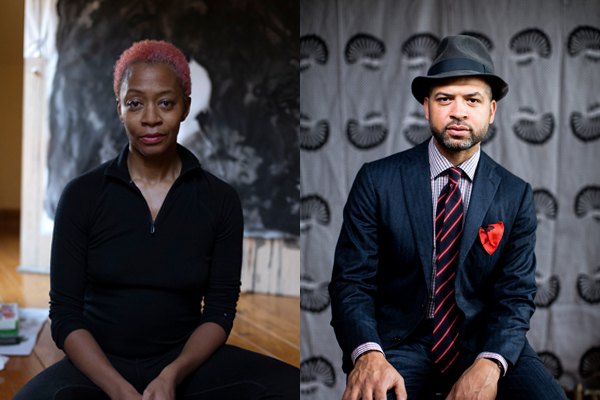