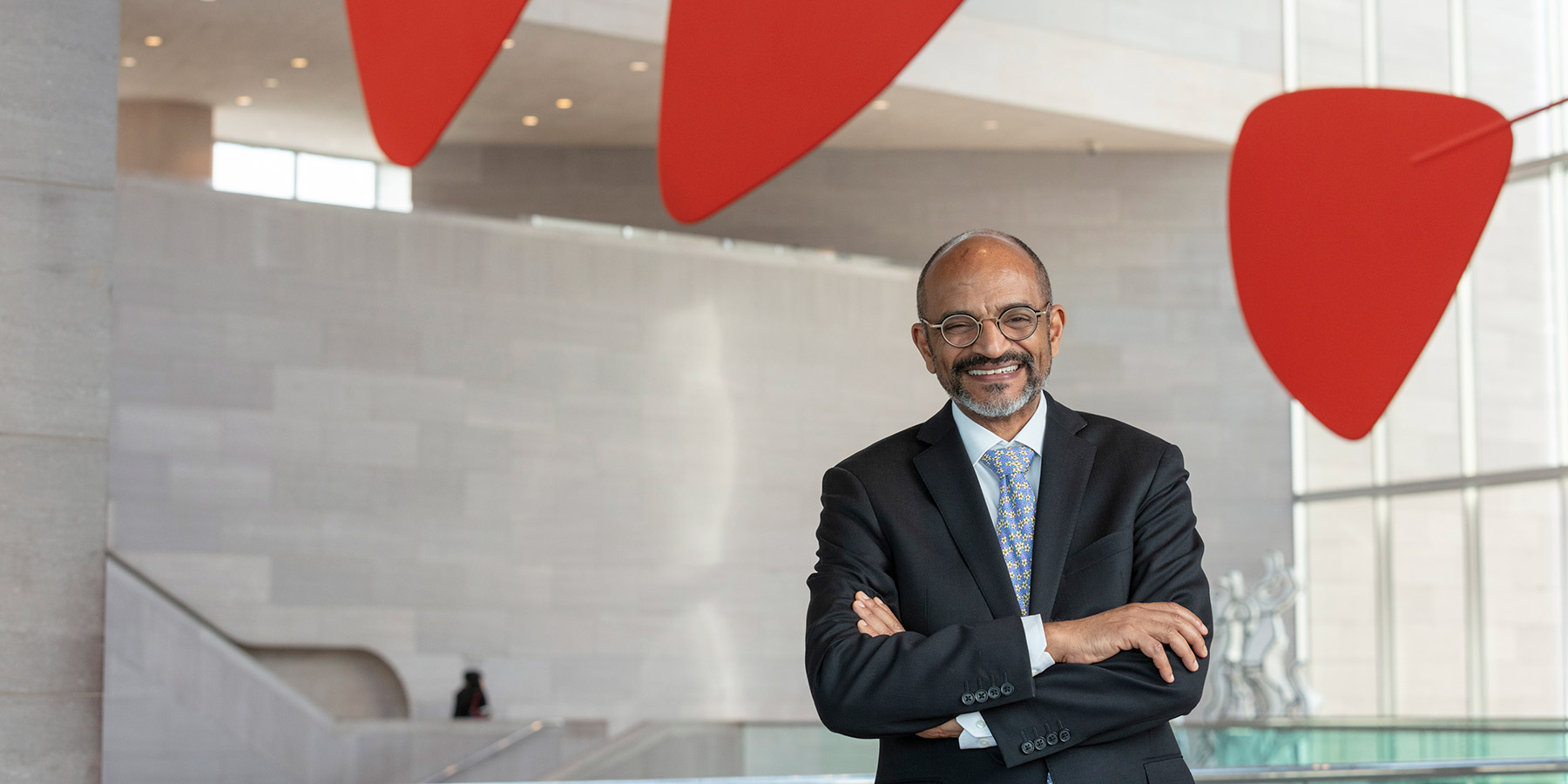 At the end of the 2021–2022 academic year, I am amazed at how different the Center environment is from a year ago. Although I personally returned to campus full-time in June 2021, the return of National Gallery staff and Center fellows has brought a renewed energy. The soft lull of conversations sprinkled with laughter is accompanied by footsteps, typing, clicking, and a myriad of other sounds of colleagues going about their day. We took these sounds of community for granted before March 2020. Over the last year, the National Gallery has navigated a return to campus, welcoming staff to a new normal state of operations. As we responded to the ever-changing world, this developing new normal was marked by starts, stops, and pivots, with Center and National Gallery staff exemplifying agility and responsiveness at every turn. The return has elicited a wide spectrum of emotions, not least of all being optimism and generosity. While we began the year with our programming completely virtual, the Center returned to public, in-person events in early March. 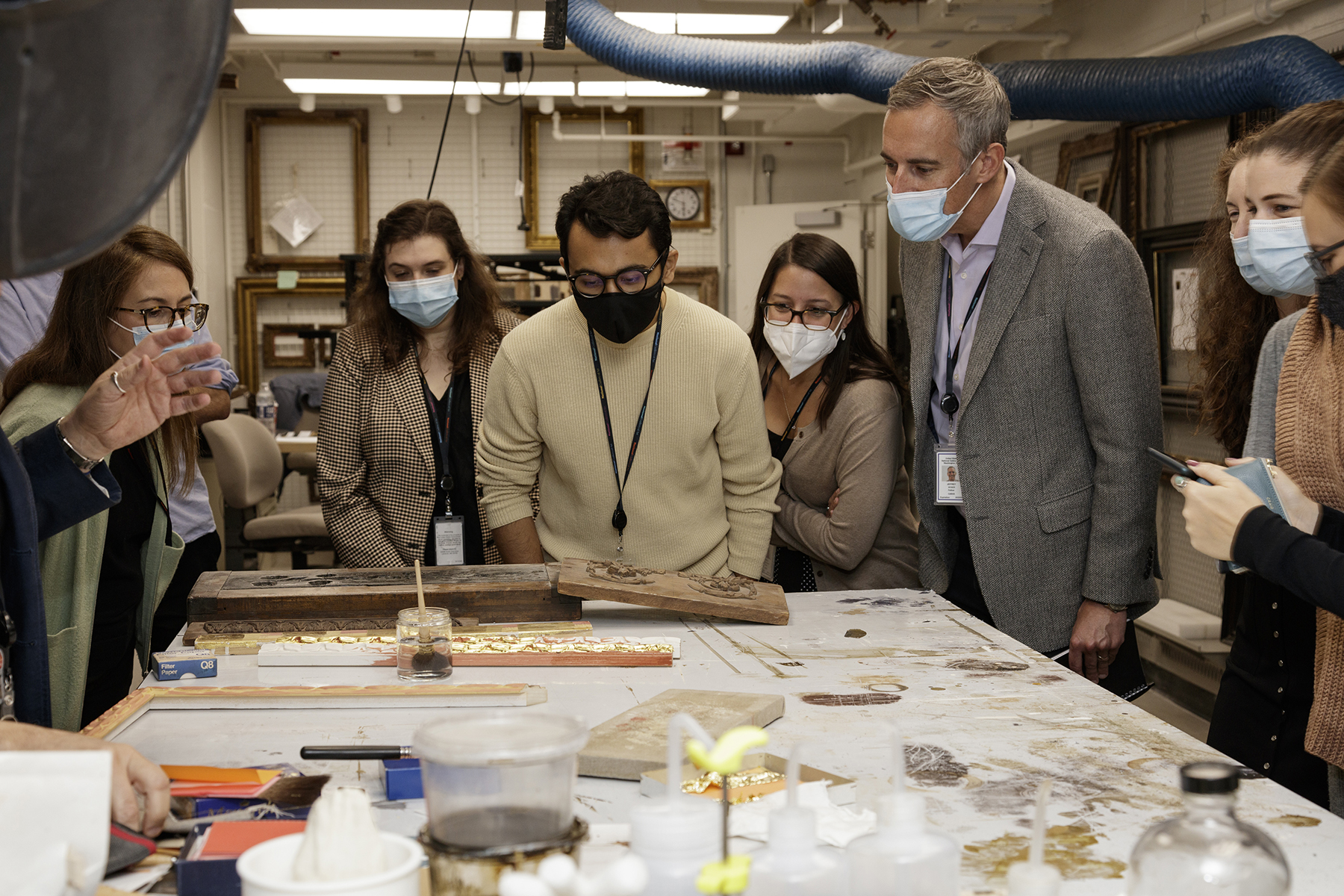 Throughout this year of evolution, the vitality of the Center has been ever present. With some allowances for circumstances, the majority of this year’s fellows arrived at the National Gallery in September 2021 and the community rapidly cohered. They formed discussion groups, attended copious tours given by National Gallery colleagues, and shared many a meal. This year the Center fellows were affiliated with institutions in the United States, Canada, Ireland, and the United Kingdom. Their research topics ranged from the emergence of coin-based silver jewelry in the newly created Navajo reservation in the territory of New Mexico to the art of brass in the Burgundian Netherlands; from historical representations of Palestinian flora to the impact of art and artists on histories of psychiatric reform; and from Kenneth Young and the Black artistic community in Louisville, Kentucky, in the mid-20th century to 16th-century German goldsmiths and their craft’s relationship to the social, political, and legal order.

Lowery Stokes Sims, this year’s Kress-Beinecke Professor, presented the inaugural colloquium of the academic year, “Painting the Black Body: Praxis and Theory, 2010–2020.” Sims also acted as an advisor to the predoctoral fellows, focusing especially on professional development. Through a series of lunchtime meetings, Sims introduced fellows to individuals who are utilizing their degrees in a variety of work settings. Guest speakers addressed topics ranging from institutional activism to historical preservation. In April 2022, the predoctoral fellows traveled to Sims’s home city, where they received a tour of Guarding the Art at the Baltimore Museum of Art, an exhibition on which Sims consulted, from the security officers who curated it. 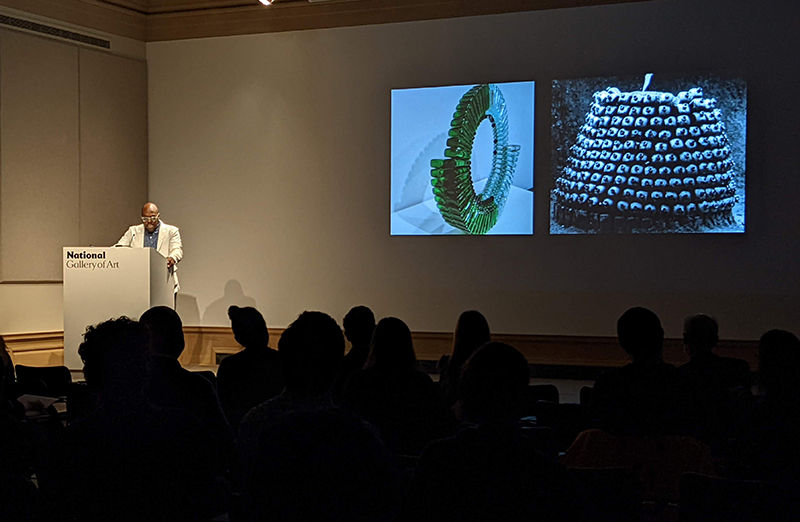 In the second year of his two-year appointment, Huey Copeland, Andrew W. Mellon Professor, continued making progress in his own research and acted as mentor to the postdoctoral fellows and research associates. He advanced his second book project, “In the Shadow of the Negress: A Brief History of Modern Artistic Practice in the Transatlantic World,” as well as refining a collection of edited essays titled Touched by the Mother: On Black Men in American Art from Watts to the Whitney. It was from this body of work that he delivered the James A. Porter Distinguished Lecture, “Conditions Reporting,” at the 32nd annual James A. Porter Colloquium on African American Art and Art of the African Diaspora, “Fearless Endeavors: Daring Art History Methodologies and Art Practices,” cosponsored with Howard University. Copeland is also coediting the Center’s forthcoming Seminar Papers volume, Black Modernisms in the Transatlantic World.

Our fall programming was kicked off by the public conference “Fragments and Frameworks: Illuminated Manuscripts and Illustrated Books in Digital Humanities,” organized by Matthew J. Westerby, the Center’s Robert H. Smith Postdoctoral Research Associate. Babette Bohn of Texas Christian University delivered the 25th Sydney J. Freedberg Lecture on Italian Art, entitled “‘More perfect and excellent than men’: The Women Artists of Bologna.” It was followed by an incontro, “Investigating the Women Artists of Early Modern Italy: Methods, Provocations, and Challenges.” In December 2021, Patricia Marroquin Norby of the Metropolitan Museum of Art gave this year’s Wyeth Lecture in American Art, titled “Prioritizing Indigenous Communities and Voices: Curating in This Time.” Norby also met with the Center community for an incontro, “Curating Now: Understanding Indigenous Perspectives, Foregrounding Indigenous Voices.” These incontri allow the Center community and invited guests opportunities to further engage with lecturers and their work. 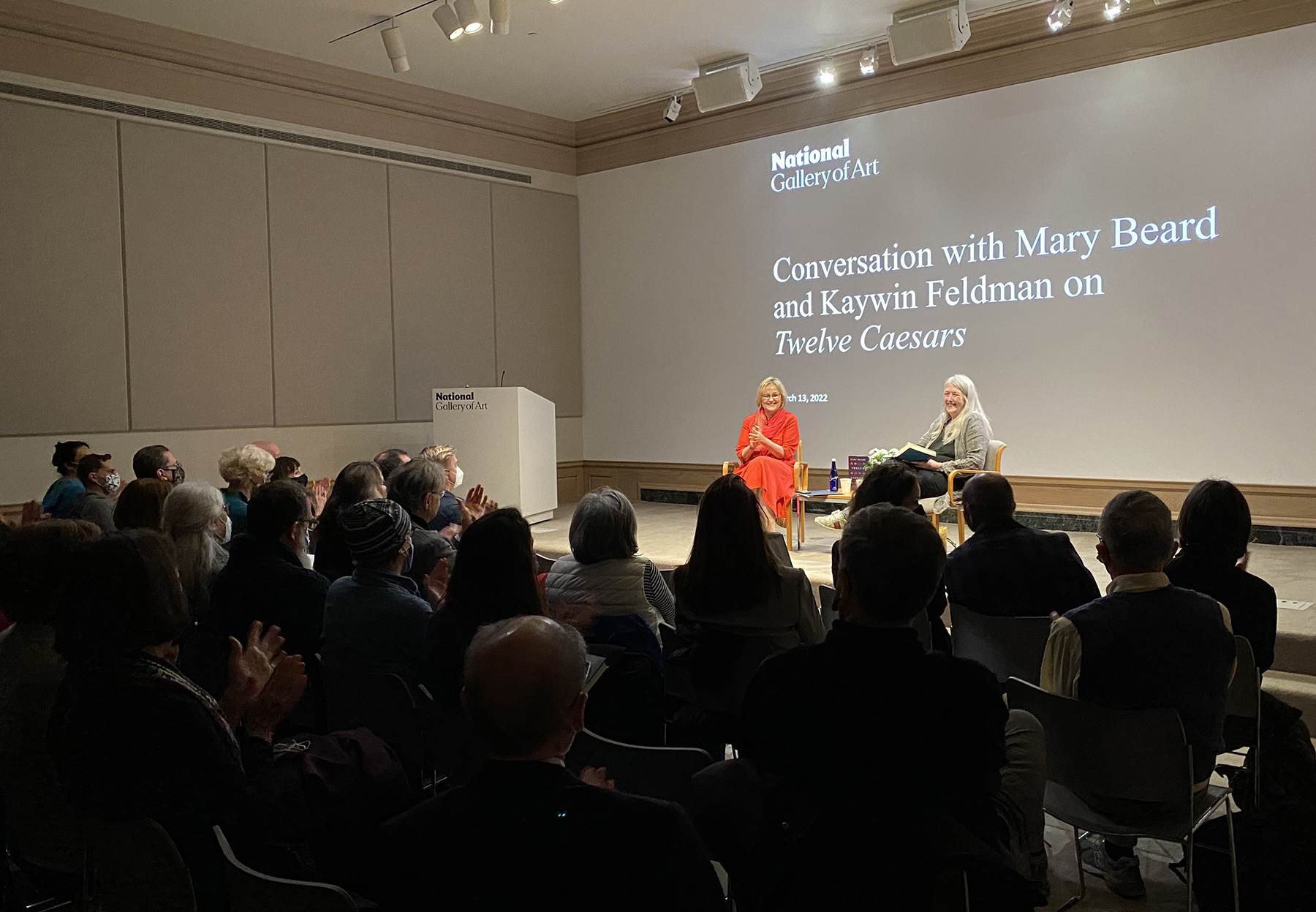 Kaywin Feldman, director of the National Gallery of Art, in conversation with Mary Beard, March 2022

With spring and a precipitous drop in COVID-19 cases in the Washington, DC, area came the opportunity to explore in-person and hybrid methods of engagement. Fellows’ colloquia and shoptalks were virtual or hybrid. As was the case with our virtual programming, hybrid public programs have continued to expand the Center’s reach and audience. They also offer a chance to gather together in once familiar ways. In fact, the Center held the National Gallery’s first hybrid public program in March 2022: a conversation and book signing with professor and award-winning author Mary Beard, whose book, Twelve Caesars: Images of Power from the Ancient World to the Present, was recently published by Princeton University Press in association with the Center. Both in-person and virtual audiences were able to engage with Beard as she and National Gallery director Kaywin Feldman discussed her work. Just as with last year’s circumstantial move to entirely virtual programming, I am impressed with the continuing ingenuity of Center staff as they navigate this new frontier. With the support of colleagues across the National Gallery, staff members have leaned into experimentation and evolution with hybrid platforms and technologies. Indeed, Center staff have become important interlocutors across the National Gallery as more divisions turn to hybrid programming.

The Center cosponsored, with the University of Maryland, the 52nd Middle Atlantic Symposium in the History of Art. Richard J. Powell of Duke University delivered the 71st A. W. Mellon Lectures in the Fine Arts, titled Colorstruck! Painting, Pigment, Affect. More than 400 online viewers joined those in the West Building Lecture Hall for the first of six hybrid lectures. Powell was not only a wonderful colleague to embrace the hybrid format, but he also met with the Center community to discuss his research. The lectures can be viewed online and will be published as a book by Princeton University Press in association with the Center. As noted, Mary Beard’s Twelve Caesars, based on her 2011 Mellon Lectures, was published in the series last fall, and Wu Hung’s Chinese Art and Dynastic Time, coming from his 2019 lectures, appeared in May. 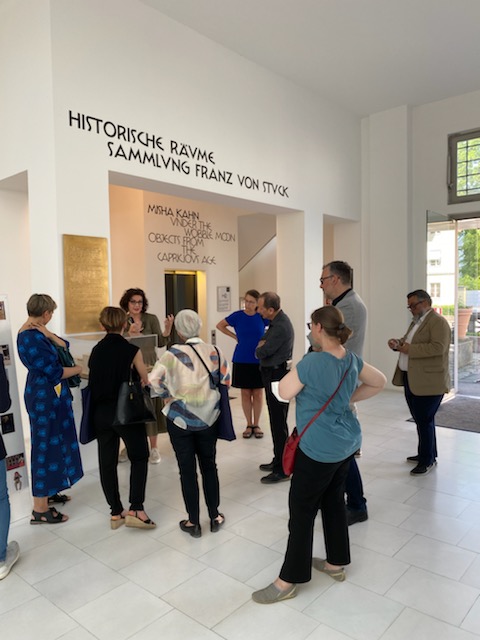 “Art Academies: Europe and the Americas, c. 1600–1900” seminar members visiting the house museum of artist Franz von Stuck during their meeting in Munich, May 2022

May has been a very busy month. First, Aruna D’Souza, Edmond J. Safra Visiting Professor, gave a public lecture titled “Art Writing and Opacity.” D’Souza also led a colloquy, “The Anarchival Impulse,” which brought together a group of artists, curators, and scholars to brainstorm ways of rethinking—even dismantling—the archive and the collection as institutions. In the middle of the month, in partnership with the Zentralinstitut für Kunstgeschichte, the Center held the second part of the seminar “Art Academies: Europe and the Americas, c. 1600–1900” in Munich. The first part was hosted virtually in the fall. These meetings, which will be published in the Seminar Papers series, have been spearheaded by associate dean Peter M. Lukehart; Ulrich Pfisterer, Zentralinstitute für Kunstgeschichte; and Oscar E. Vázquez, University of Illinois at Urbana-Champaign. Later this month, the Center, in collaboration with the National Gallery’s curatorial division, welcomed Harvard University’s Traveling Research Seminar on Afro-Latin American Art for a study day focused on the exhibition Afro-Atlantic Histories, which opened in April. During the daylong event, we hosted a panel discussion with chief curator E. Carmen Ramos and exhibition curators Kanitra Fletcher, associate curator of African American and Afro-Diasporic art; Molly Donovan, curator of contemporary art; and me. The group also participated in study sessions with the four of us.

The planning and the construction of the Howard University Undergraduate Internship program continues, and we have succeeded in meeting several important milestones over the past several months. The first is the creation and approval by Howard of the first part of the internship curriculum, which guarantees academic credit for participants. We have also assembled an internal advisory committee, which has helped to form the curriculum, create a mentorship training model, and establish selection criteria for the candidates. We received 49 applications for six openings and have chosen the first cohort, which will arrive at the Center in September 2022.