The City of Gods and Fortune: An Architectural and Urban History of Daulatabad, c. 13th–15th Centuries

The fortified city of Daulatabad in Deccan India was of comparable size and prestige to Delhi from the 13th to 15th century. Daulatabad was situated on important pilgrimage and mercantile routes and attracted immigrants from various parts of the world. Due to its significance and strategic location, political powers from northern and southern India—practicing both Hinduism and Islam—fought fierce battles over the city. Several of them made it their capital. Despite its importance, Daulatabad is often treated as a footnote to Delhi, and its rich architecture and urban layout have not been art-historically examined. My dissertation, “The City of Gods and Fortune,” places Daulatabad at the heart of medieval South Asia. By analyzing an important but neglected corpus of architectural and urban spaces from the region, I argue that Daulatabad is essential to writing an integrated history of medieval South Asia that crosses political, religious, and linguistic lines.

My dissertation reveals that Daulatabad was a political center built in a sacred landscape, one that linked the histories of northern and southern India. In five chapters, I trace the material facts of this linked history through a close analysis of architectural works, which are primarily of a religious nature—temples, mosques, shrines, minarets. I examine these architectural sources in a broader sociopolitical context through primary texts in multiple languages: Sanskrit, Marathi, Persian, Arabic, and Urdu. Equally, I compare Daulatabad’s buildings with others in South Asia and the greater Islamic world, shedding light on how historical actors constructed and utilized works of architecture in Daulatabad. The comparative methodology connects the history of Daulatabad with that of other urban centers at the time. Among the themes that emerge from this art-historical and textual analysis is the issue of race—a subject that scholars have seldom engaged with in the premodern South Asian context. 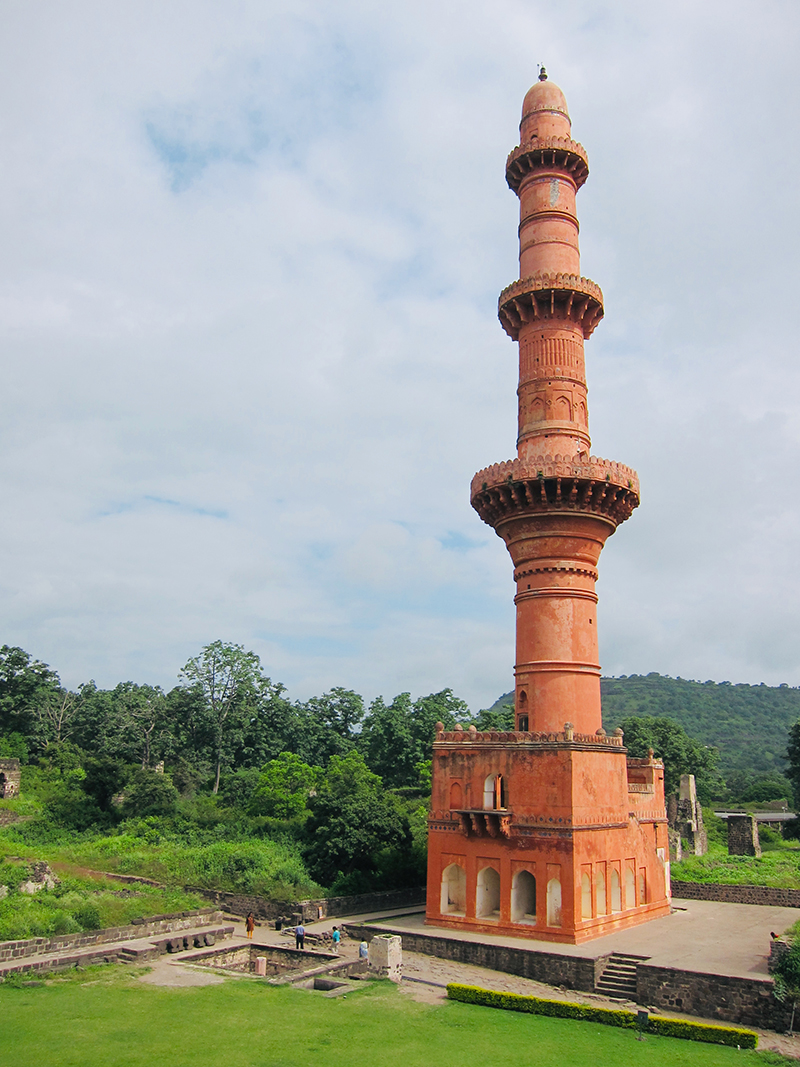 Organized chronologically, my dissertation takes a multifaceted approach to studying Daulatabad’s built environment and includes new photographs, plans, maps, drawings, and translations of epigraphs from the region. Several architectural works included in my study have been art-historically examined in detail for the first time; these include, for example, the Old Mosque of Daulatabad (1307), the Chini Mahal (mid-14th century), the Burhan al-Din Tomb (1343–1344), and the Chand Minar (1446). I examine these and other works by focusing on four broad themes: the study of sacred landscapes, the role of religion in shaping architectural spaces, the effects of cross-cultural encounters in shaping a city, and the function of race and ethnicity in architectural design.

The first chapter takes an ecocritical approach to argue that Daulatabad was conceived as an incarnation of the Himalayan landscape in the Deccan. The city was built at the crossroads of ancient pilgrimage networks and belonged to a “sacred landscape” that linked it to nearby pilgrimage sites. The next chapter tackles issues of religious controversy by focusing on two mosques in Daulatabad built from Hindu temple spolia. By analyzing the mosques in light of textual and numismatic sources, the chapter argues that the construction of these mosques indexed different moments of regime change at Daulatabad: that is, from a Hindu to an Islamic polity. The third chapter studies the palimpsestic built environment of Daulatabad, focusing on stepwells, palatial structures, detached epigraphs, coins, ʿidgahs (walled structures with niches for celebrating Eid), and fortifications, while the fourth chapter studies a series of shrines of Islamic mystics constructed around the fortified city. These two chapters challenge the notion that Daulatabad was a passive receptor of ideas from different regions—particularly Delhi—and highlight instead the creativity of the patrons and makers at Daulatabad. The final chapter analyzes a monumental minaret at Daulatabad, the Chand Minar, commissioned by an African military slave, and argues that concerns with race shaped courtly politics in the medieval Deccan. Collectively, these chapters bring together multiple narrative strands to tell a history of Daulatabad through its architecture and urbanism.

“The City of Gods and Fortune” thus contributes to the study of South Asian and Islamic architecture and urbanism by critically engaging with ongoing debates in landscape studies, religious studies, cross-cultural studies, and race and ethnicity studies, as well as their relationships with the arts.

In the coming academic year, Mohit Manohar will be Provost’s Postdoctoral Fellow in the Department of Art History at the University of Chicago.