Immediately following the end of World War II, artists from across the United States joined with artists arriving in New York from all corners of the globe to participate in what David A. Ross has characterized as “the richest and most tangled cultural experiment in history.” In the context of unspeakable violence abroad, the ubiquitous threat of nuclear annihilation, and the counterweight and narrative of the postwar prosperity boom, North America, particularly its urban centers, became the site of a revivified avant-garde that merged painting and filmmaking, architecture and sculpture, poetry and music, producing ever new genres of making and remaking for at least two decades. 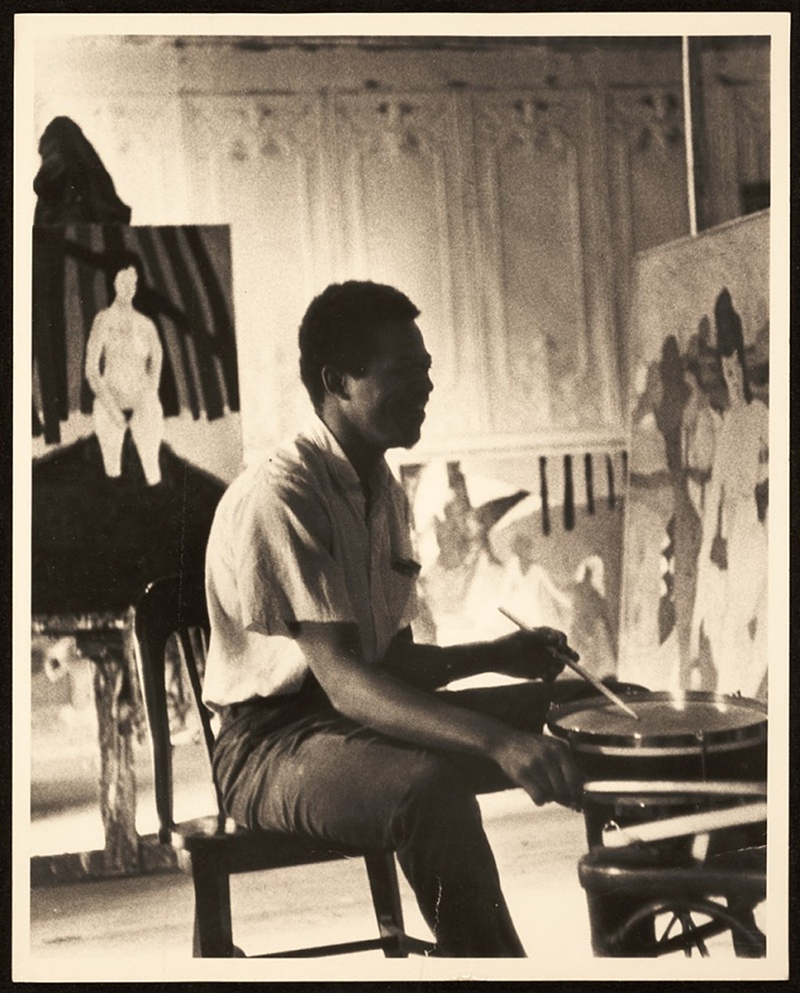 Kentucky-born painter Bob Thompson (1937–1966) was a vital part of it all. His brief but fervent career produced a staggeringly prolific body of work (over a thousand paintings and drawings) and he achieved rare success, showing in the top contemporary galleries of the 1960s. Settling in lower Manhattan in 1959, the artist fluidly moved between Beat literary and musical scenes on the Lower East Side and Greenwich Village—mingling with poets LeRoi Jones (Amiri Baraka) and Allen Ginsberg, jazz musicians Ornette Coleman and Archie Shepp, and contributing to the earliest happenings of Allan Kaprow and Red Grooms. In the sociability of these tight-knit bohemian communities, Thompson often painted for days without resting, covering canvas after canvas “hooked” (as he wrote in a letter preserved in the Archives of American Art) “on pigment” and “buried alive” in bright colors. In May 1966, while traveling in Rome, he died from complications related to gallbladder surgery and a drug overdose.

Remarkably, and despite recognition in major museums and cultural institutions, Thompson is a curiously understudied figure in the history of art. As the Leonard A. Lauder Visiting Senior Fellow, I have been conducting research into his vast corpus, aiming to reconsider the motivations for his elision from the histories of art of the 1960s, and offering an accounting of his practice as one purposely set outside the established painterly taxonomies of the era. An abstract figurative painter who referenced the Western tradition, Thompson produced canvases that are indeed startling, not only in terms of sheer aesthetic output but in the style of his painting. An ardent admirer of old master works of the 15th through 17th centuries, throughout his short career Thompson produced inimitable appropriations (“variations,” as he called them) that aspired to the complex painterly practices of Nicolas Poussin, Piero della Francesca, and Francisco Goya. He effectively expanded recurrent motifs as points of departure to create his own private world, one that is brilliantly colored to declare a faith in nature as the source of life. From small gouaches to large oils on canvas, his oeuvre is populated by fantastic dream figures of unlocatable origins crowding the painterly space, looming next to horses, spread-eagled birds, devils, ghosts, apparitions—moods at turns grim, other times joyous. Offering a bold expressionism separated into broad, matte swaths of visionary clusters, many of his best works merge religious and mythological imagery into a singular iconography buttressed by explosive pigment and flattened forms.

Beyond how Thompson’s life and death have retroactively shaped our understanding of his inexhaustible productivity, this book-length study begs a heuristic focus, asking instead: Might Thompson’s work be taken up through a different set of operations—one that does not deny critical historiographic tales, but which also seeks to complicate the terrain, especially as it pertains to the preservation of the conventions of figuration, toward more generative ends? For example, how might we rethink Thompson’s compositional strategies and explosively vibrant pigment as actively resisting our expectations of viewing—a kind of undogmatically spiritualist recognition of entering the space of representation as communal witnessing?

More than a recovery task of a significant artist, my project intends to expand the accepted narrative of late modernist art as confined to cool displays of pop and minimalist forms, largely by white male artists. Instead I demonstrate that Thompson’s pulsating imagery signals an uneasy correspondence to the era’s anxieties about atomic war, the battle for civil rights, and environmental disaster. Paradoxically hopeful that the bourgeoning Space Age could distill a vision of the future that relied on the reimagining and reengineering of human experience, we may read the monsters, winged creatures, and masked faces that abound in Thompson’s visual lexicon as part of a spiritualist defense—one that has its roots in rich African Diasporic cultural traditions. Reevaluating Thompson’s work in light of rigorous new scholarship on Black ontology and performance studies, my research offers a nuanced and inclusive history of abstract figurative painting and radical experimentalism as they traversed medium specificity in the 1960s and beyond.

Nicole L. Woods will return to the University of Notre Dame, where she is assistant professor of modern and contemporary art in the Department of Art, Art History & Design. During the 2022 spring semester, she will present lectures on Bob Thompson at the University of Chicago Divinity School and the Smart Museum of Art. She will also be traveling to New York and Louisville to continue her research on Thompson in various archives and collections.