During my two-month (remote) residency at the Center, I completed a book chapter on industrial photography and film during the Third Reich. This chapter is part of my current book project, “Inventing the Nazi Worker: The Culture of Work and the End of Class,” which I hope to complete by the end of this calendar year. With chapters on literature, criticism, art, film, theater, and music, the book continues the cultural-historical overview of working-class cultures and socialist/communist imaginaries I started with The Proletarian Dream: Socialism, Culture, and Emotion in Germany, 1863–1933 (2017). Based on extensive archival research, this second volume (of a three-volume project) takes seriously the Nazi Party’s original promises to the workers by reconstructing the appropriation of socialist ideas, identifications, and iconographies. In emphasizing the aesthetic and ideological continuities across the 1933 divide, my study pursues three major goals: to show the extensive debt of National Socialism to the workers’ movement of the Wilhelmine and Weimar years; to argue for the centrality of political emotions in modern mass movements; and to uncover the populist identifications behind the competing imaginaries of community, folk, and the people.

Nazism was a visual culture made possible by new media technologies and approaches to politics as mass spectacle. The cult of the German worker and the discourse of Arbeitertum (literally “workerdom”) found privileged expression in the photobook, a visual form with great popular appeal and propagandistic potential. Industrial photography, in particular, was seen as the perfect medium for showcasing the strength of German industries, advertising the modernity of the Nazi state, and mobilizing workers within the war economy. My chapter examines two photobooks that bring very different aesthetic registers to that same ideological project: Paul Wolff’s Arbeit! (Work!, 1934) and Erna Lendvai-Dircksen’s Arbeit formt das Gesicht (Work forms the face, 1938). An enthusiastic promoter of the small-format Leica camera, Dr. Paul Wolff (1887–1951) produced numerous photobooks that capture the look and feel of modern life during the 1930s and 1940s. He had superior technical skills and a brilliant sense of composition; his approach is often compared to that of Albert Renger-Patzsch. Meanwhile, Erna Lendvai-Dircksen (1883–1962) remains closely identified with her ambitious multivolume project Deutsche Volksgesicht (The face of the German folk, 1932–1944) and the problematic role of photography in the advancement of ethno-nationalism. Wolff’s postwar career as an early chronicler of Germany’s “economic miracle” and Lendvai-Dircksen’s quick fall into oblivion have encouraged gendered readings of their contributions to 20th-century photography—exonerating him as a modern technocrat and denouncing her as a völkisch ideologue. In fact, it is the coexistence of both strands that distinguishes Nazi modernism as an aesthetic, emotional, and ideological project in need of closer attention. 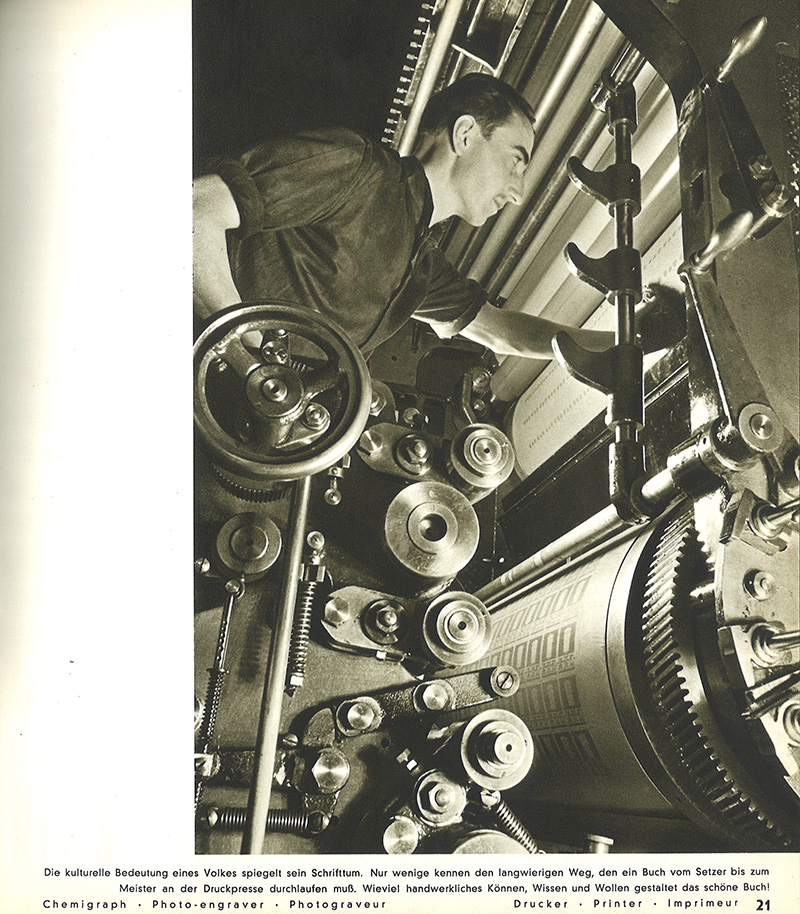 The contributions of Wolff and Lendvai-Dircksen to the discourse of Arbeitertum can be analyzed through their formal treatment of the constitutive tension between class and folk and its reconciliation in the figure of the German worker. For both, his empowerment—and he is almost always male—is predicated on the alliance between industry and state; its ultimate goal is the identity of work and folk community. Formally, these relationships are articulated through the visual framing of worker and machine, the use of composition and lighting, and the implicit assumptions about work, industry, and community as personified by the German worker. Arbeit! consists of 200 black-and-white images printed in high-quality photogravure, with descriptive captions in German, English, and French. Documentary in style, these photographs show individual workers quietly honing their skills in the optical, mechanical, and chemical industries or working together in small groups on industrial construction sites, in coal mines, and at steel mills. Commissioned by the Henschel Werke in Kassel, Lendvai-Dircksen’s book features 95 traditional portraits of blue- and white-collar workers, with only about half depicted at their workplaces. As the title suggests, “Work Forms the Face” is based on three propositions: that work, whether physical or intellectual, leaves traces on the face; that these traces can be preserved and deciphered; and lastly that they are reducible to conventional notions of social type or professional habitus. For Wolff, industrial modernity meant the merging of worker and machine; for Lendvai-Dircksen, it was an affirmation of German character. Yet, for both, the fate of industrial modernity was inseparably connected to the Nazi state—a connection that deserves closer examination, not least in order to gain a better understanding of the socialist imaginaries and racialized iconographies that survived long into the postwar years.

Sabine Hake will return to the University of Texas at Austin, where she is the Texas Chair of German Literature and Culture in the Department of Germanic Studies.