Touted as 16th-century metalwork at its technical zenith, prized as diplomatic gifts, and celebrated for stimulating rituals around the banquet table, drinking vessels fashioned by Nuremberg goldsmiths were in fact highly politicized objects that asserted legal claims. Goblets wrought with laborers as their stems situated load-bearing supporters beneath top-heavy bowls. These objects gave material form to the contention that members of certain estates held privileges to drain natural resources, while those beneath them were in a position only to work the earth. Hired to make the oligarchies of the Holy Roman Empire appear as if in harmonious balance, German goldsmiths produced gilded silver goods that made visible the mutually supportive relationship of those with trained skills to those with privileges to own land. Focusing on the precious metal vessels and etched designs produced by the Nuremberg craftsman Christoph Jamnitzer (1563–1618), my book exposes Kunstkammer “curiosities” and the “ornament prints” that prefigured them as transmitters of a corrosive legal theory.

In 1610 Jamnitzer published 60 pages of etchings under the title Neuw Grotteßken Buch (New Book of Grotesques). Beginning with a letter of dedication to the nobleman Carl Ludwig Fernberger, Jamnitzer likens himself to Christopher Columbus and his novel etchings to Columbus’s invention of a passage to the so-called West Indies. Aligning his patron with the Spanish monarchs who had provided the explorer with a charter to take possession, govern, and trade in whatever lands he might reach, Jamnitzer’s booklet furnishes Fernberger with a vision of what he might own if he issues a commissioning decree. It offers the patron the opportunity to turn ideas into gold.

Jamnitzer’s analogy to Columbus is all the more striking in light of the shift in the sourcing of precious metals that took place over the course of the 16th century, from the decline in productivity of central European lodes to the increasing importation of silver from the Americas from the 1560s on. These statistics make it likely that at least some of the vessels discussed in my book were fashioned from material forcibly unearthed by Native Americans and enslaved Africans. My project focuses on what happened to the raw material once it was delivered to the goldsmith’s shop. I argue that the metals were then wrought to give form to the social systems that enabled the subjugation of one caste of peoples by another. The shapes into which the material was worked became instruments in the validation of unequal access to natural resources and the legitimacy of certain forms of governance.

On the page following the dedication to Fernberger, Jamnitzer presents his booklet to young apprentices who might wish to apply his designs. This offering pronounces a principle of mutual support that structured the goldsmith’s trade and positioned its unique relationship to the city council. In developing this declarative mode of sharing, 16th-century printers of design proposals ratified rather than undermined a political system designed to control inequity among the members of different estates. 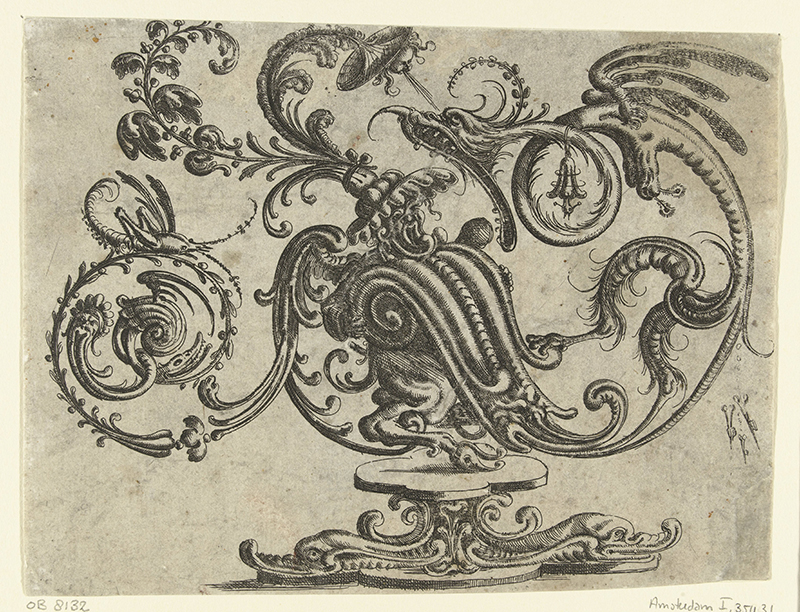 The images gathered under the title pages of Jamnitzer’s booklet and others of its kind have, since the early 19th century, been designated as “ornament prints.” Used to classify prints that offer patterns as well as those that envision tableware, furniture, and architectural elements, the term has designated a formal and functional lassitude. According to leading scholars of this genre, ornament prints allow artists to explore “purposeless fantasies.” Jamnitzer’s etchings have been described as “images that thematize play” and the assertion of “the powers of invention” by a “consummate gamester.” These 21st-century statements share with the scholarship of postwar German historians of art an association between the grotesque and “free fantasy . . . the abundant, bubbling imagination.”

While such assessments capture the tone of these prints, they have dangerously downplayed the ways in which the booklets engage in performative political speech. Focusing on the textual articulations of communality that frame design proposals, I wish to shift the emphasis from these prints as expressions of “artistic freedom” and consider printed booklets of design proposals as guidebooks to recognizing the political theory re-instantiated there as well as in metalwork objects.

“Insidious Silver” makes visible ways that wrought objects of gilded silver—and the printed images that stimulated their formation—legitimize the dispossession of Native American inhabitants of ore-rich terrains as well as the property owner’s fantasy of a continuous supply of labor. But my book also offers to its own moment—one fraught by unresolved battles over the restitution of material wealth and the inadequacies of provisions for recompense to the dispossessed—the hope that art can participate in newly configuring the relationship of law to land.

Shira Brisman will return to her position as assistant professor in the History of Art department at the University of Pennsylvania, where she is also affiliate faculty in the departments of History and Germanic Languages and Literatures, as well as core faculty in the Visual Studies Program.