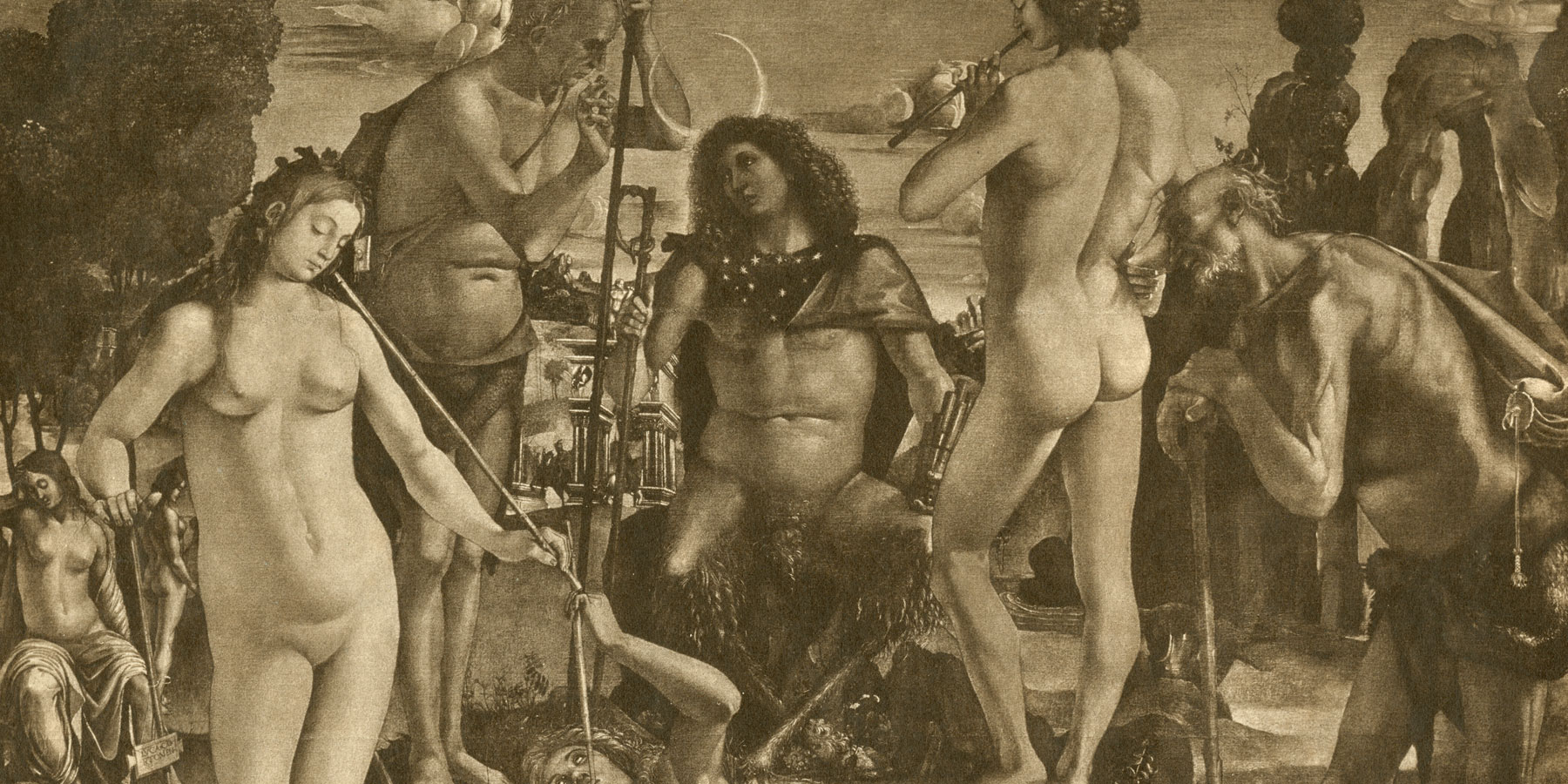 During World War II, museums in Germany evacuated their most precious collections to fortified locations to protect them from bombs and other war hazards. In Berlin, these evacuation points were located in antiaircraft towers called Flaktürme, stations used by the Luftwaffe to defend against Allied air raids. On May 6, 1945, shortly after the Soviet entry into Berlin, fires broke out in one of these locations known as Flakturm Friedrichshain, which housed a number of objects from the former Kaiser-Friedrich-Museum (renamed the Bode Museum in 1956). More fires broke out between May 14 and 18, and by the time they were extinguished, the flames had incinerated three floors of paintings, sculptures, and decorative arts, destroying some of the most significant works from what was one of the most impressive and valuable art collections in Europe.

The Flakturm Friedrichshain fire surely ranks among the worst art disasters in history. More than 400 paintings and approximately 300 sculptures from the Berlin museum were lost, either missing due to looting at the time of the fires or presumed destroyed in the flames. Among the losses were many old master paintings, including works by Caravaggio, Tintoretto, Cranach, and Rubens, as well as several sculptures by Donatello and his followers. In the years since, some of the sculptures from the fire, although quite badly damaged, have resurfaced, but only one of the 434 lost paintings has ever been found.

The following images are a selection of prominent pieces that went missing or were destroyed in the flames at Flakturm Friedrichshain. The NGA Image Collections has prewar photographs and slides of more than 100 works from this vanished collection. Authentication comes from a catalog of the lost art, Dokumentation der Verluste, published by the Staatliche Museen zu Berlin. For a more complete history of this event and the artworks in question, see The Lost Museum: The Berlin Painting and Sculpture Collections 70 Years after World War II, edited by Julien Chapuis and Stephan Kemperdick and published in 2015.

Lombard 16th Century, Madonna and Child, n.d., oil on poplar panel. In 2012, this painting was returned to the Gemäldegalerie in Berlin by the son of the US officer who had purchased it in 1946. It is the only painting known to have been stored at Flakturm Friedrichshain that has reemerged since the fire.

Barnaba da Modena (active 1361–1383), Madonna and Child Feeding Goldfinch, 1369, oil on canvas over poplar panel. Goldfinches have a complex symbolism that has been associated with the human spirit, fertility, and the Passion of Christ. They frequently appeared in Italian Gothic and Renaissance devotional images. This work, one of the earliest depictions of this symbol in Italian painting, was the only known painting by Barnaba to have featured a goldfinch.

Sir Peter Paul Rubens (1577–1640), Neptune and Amphitrite(?), c. 1614, oil on canvas. The largest gallery in the Kaiser-Friedrich-Museum was reserved for the work of Rubens and his pupils. Although this work was originally interpreted as an image of the god of the sea and his lover, research suggests that the figure might be a personification of one of the great rivers, possibly the Nile or the Ganges.

Sandro Botticelli (1446–1510), Madonna and Child with Angels Carrying Candlesticks, c. 1485/1490, oil on poplar panel. This tondo by Botticelli was called “cosa bellissima” (thing of beauty) by Vasari, but today only the frame (not pictured) remains. Commissioned by director Wilhelm von Bode specifically for this work, the frame was left at the museum during the war in order to conserve space in the Flakturm, and thus survived the war undamaged.

Francesco Botticini (1446–1497), Christ on the Cross and Four Saints, c. 1475, oil on poplar panel. This work was notable for its skillful rendering of 15th-century Florentine fashions, as well as its anachronistic depiction of Biblical and religious figures wearing such contemporary clothing.

Alonso Cano (1601–1667), Saint Agnes, c. 1624–1638, oil on canvas. The Italian and northern European collections of the museum suffered the worst in the disaster, but nearly a dozen Spanish Renaissance and Baroque paintings were also destroyed. This life-sized portrait of Saint Agnes had a strong sense of three-dimensionality that reflected the artist’s other talents as a sculptor and architect.

Michelangelo Merisi da Caravaggio (1571–1610), Portrait of a Young Woman, c. 1590, oil on canvas. With only 60 or so works by Caravaggio in existence, the loss of three of his works in the fire was particularly devastating. The sitter for this painting was allegedly courtesan Fillide Melandroni, a close friend of the artist.

Michelangelo Merisi da Caravaggio (1571–1610), Saint Matthew and the Angel, c. 1602, oil on canvas. Perhaps the most famous of the destroyed works, this masterpiece was incendiary for its time and a prized possession of the museum. Commissioned for the Church of San Luigi dei Francesi in Rome, it was rejected due to its representation of Saint Matthew as an ordinary and possibly even uneducated man, as the angel appeared to move his quill for him.

Petrus Christus (active 1444–1475/1476), Saint Catherine, c. 1470/1475, oil on oak panel. Originally part of a triptych, this panel and its companion, Saint John the Baptist, were the largest of Christus’s known works. They even outsized the central panel that once fit between them, Death of the Virgin, now located in San Diego, California.

David Teniers the Younger (1610–1690), The Temptation of Saint Anthony, 1647, oil on oak panel. Teniers frequently revisited the subject of this painting, and this example was of exceptional quality in composition and rendering of the figures. The temptress is believed to be modeled on Anna Bruegel, Teniers’s wife and painter Jan Bruegel the Elder’s daughter.

Domenichino (1581–1641), Vincenzo Scamozzi, early 17th century, oil on canvas. Vincenzo Scamozzi was an influential architect of the late Renaissance who designed many Italian churches and theaters and authored the highly significant L’idea dell’architettura universale in 1615, one year before his death.

Philips Wouwerman (1619–1668), Riding School on a Riverbank, mid-17th century, oil on canvas. Before being evacuated from the museum, this painting was displayed alongside works by Rembrandt and Jacob van Ruisdael in one of a series of galleries representing the best of Dutch Baroque painting. Wouwerman no doubt earned a place in the collection for his masterful portrayals of equestrian scenes, but since its loss, his work is no longer represented in the Bode Museum.

Vincenzo Foppa (c. 1430–1515/1516), Christ Mourned, n.d., oil on poplar panel. This work marked a trend toward powerful and realistic expressions of grief in depictions of the Lamentation as opposed to the more understated facial expressions and movements that were common at that time.

Jean-Antoine Houdon (1741–1828), Jean-Jacques Rousseau, 1778, plaster. This bust is a cast from of one of three models created by Houdon of Rousseau. Houdon based the face on the death mask that he molded less than a day after the philosopher had passed away.

Francesco Laurana (1420/1425 –1502), Portrait of a Woman, c. 1472, painted and gilded marble. Damage from the fire caused this bust to break apart at the neck, but it still survives. The sitter has been tentatively identified as Ippolita Maria Sforza, the wife of King Alfonso II of Naples. The shoulders are located in Moscow, where they were taken at the end of 1945, but the head remains in Berlin.

Fra Filippo Lippi (c. 1406–1469), Madonna as Mother of Mercy, mid-15th century, oil on poplar panel. Part of a Pistoian altarpiece designed by Pesellino, this composition was by Fra Filippo Lippi, although his workshop may have done some of the painting. While the figures surrounding the Madonna kneel to her, they are proportionately equal to her in size, a departure from other versions of the Madonna of Mercy.

Nicola Pisano (c. 1220–1278/1284), The Elevation of the Soul of Saint Martin, c. 1280, marble. This relief was once part of the tomb of Martino Ammannati from the church of San Francesco in Pistoia. Wilhelm von Bode, one of the first directors of the Kaiser-Friedrich-Museum and eponym of its successor, the Bode Museum, acquired perhaps the most complete collection of Italian Gothic sculpture of the early 20th century, much of which was damaged, looted, or destroyed in the fire.

Sir Joshua Reynolds (1723–1792), Mrs. Boone and Her Daughter, c. 1774, oil on canvas. While the majority of its collection focused on Italian art, the Kaiser-Friedrich-Museum also contained a number of works by renowned English portraitists. The child in this painting is believed to be Harriet Anne Boone, who later married Scottish diplomat and author Sir William Drummond.

Ercole de’ Roberti (c. 1455/1456–1496), Madonna and Child Enthroned with Four Saints, c. 1475, oil on canvas. This grandiose painting was the first large altarpiece by Roberti, a pupil of Cosmè Tura, to whom this painting was once attributed. The position of the sleeping Christ child foreshadows his position after his death, depicted in his mother’s arms in the Pietà.

Jacob van Ruisdael (c. 1628/1629–1682), A Stormy Sea, c. 1670, oil on canvas. Although Ruisdael was a prolific landscape painter, there are fewer than 30 known seascapes by the artist in existence, making the loss of this work especially regrettable.

Andrea del Sarto (1486–1530), Madonna and Child Enthroned with Saints, 1528, oil on poplar panel. Painted just two years before his death, this was one of the artist’s final works, with coloring that was described as “magnificent.”

Luca Signorelli (1445/1450–1523), Pan with His Companions Making Music, c. 1489–1490, oil on canvas. Also known as The School of Pan, this monumental painting was a jewel of the Kaiser-Friedrich-Museum due to its size, historical significance, and complex layers of meaning. Painted by Signorelli for the ruler of Florence, Lorenzo de Medici, it was due to be moved to another location a few months before the fire, but the new facilities could not accommodate the size of the canvas, sealing the fate of this and many other large-scale works housed in the Flakturm Friedrichshain.

Jacopo Tintoretto (1518–1594), The Annunciation, c. 1578–1580, oil on canvas. Compared to another Annunciation scene by Tintoretto that still exists in San Rocco, Venice, this version was a brighter and more traditional composition of the subject. It focused on the open garden as an allegory for the conception of Jesus, and expressed the artist’s characteristic dynamic movement and lighting of the figures.

Emanuel de Witte (c. 1616–1691/1692), Interior of a Gothic Church, 1668, oil on canvas. The Kaiser-Friedrich-Museum housed an impressive collection of northern European art, and this church interior by De Witte was one of its finer acquisitions. This Dutch masterpiece is listed as one of the “most wanted” missing artworks by the Monuments Men Foundation.