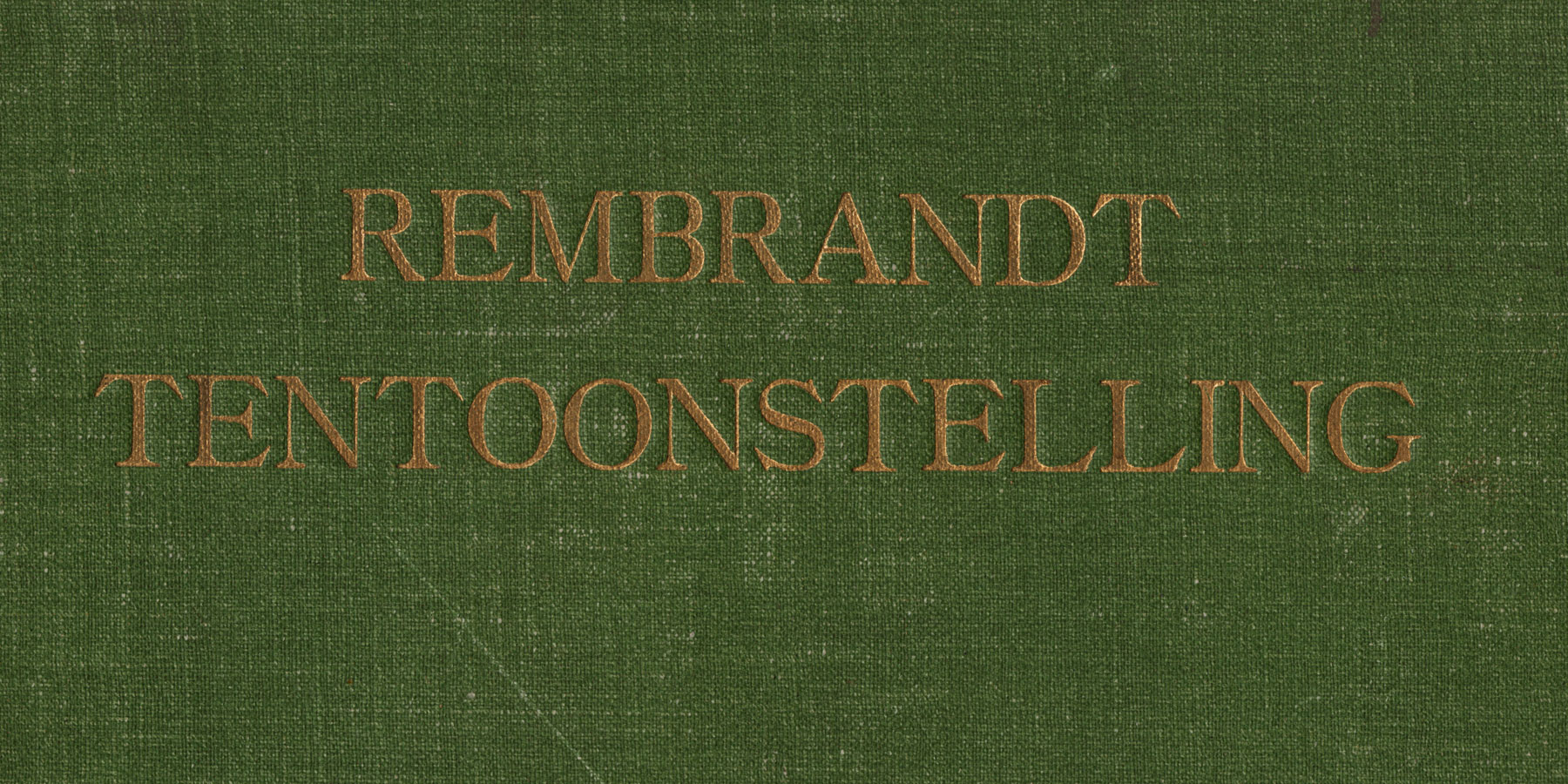 The cloth cover of the Rembrandt exhibition folio is stamped with gilt lettering.

Portrait of Queen Wilhelmina of the Netherlands sometime after her coronation.

Transfer of Nightwatch from the Rijksmuseum to the Stedelijk Museum for the Rembrandt exhibition, August 30, 1898.

Room 26 with view of Cabinet 25. Drawings were exhibited in Room 26. There is a view of Cabinet 25 through the doorway, and Portrait of an Old Woman Cutting Her Nails, now in the collection of The Metropolitan Museum of Art, can be seen on the right.

Room 26 with views of Room 27 and Cabinet 25. Through the doorway on the right is Room 27, where Portrait of a Lady with an Ostrich-Feather Fan (now at the National Gallery of Art) can be seen on the left.

Room 28, wall A. Portrait of Nicolaes Ruts, now in The Frick Collection, hangs second from the left.

Room 28, wall C. Rembrandt and His Wife, Saskia van Uylenburgh at Her Toliet, now in The Royal Collection, Buckingham Palace, hangs third from the left.

Room 30, wall B. The Visitation, now at the Detroit Institute of Arts, hangs second from the left.

Room 27, wall A. Rembrandt’s Self-Portrait, now in the Kenwood House Collection, is the fourth painting from the left.

Exhibition floor plan for rooms 22–30. Portrait of a Gentleman with a Tall Hat and Gloves and Portrait of a Lady with an Ostrich-Feather Fan (both now in the National Gallery of Art collection) hung in room 27 at 110 and 111. (Credit: Stichting Stedelijk Museum Amsterdam)

Room 27, wall C. Portrait of a Gentleman with a Tall Hat and Gloves and Portrait of a Lady with an Ostrich-Feather Fan (both now in the National Gallery of Art Collection) hang third from the right and on the far right.

Room 30, wall A. Portrait of Princess Amalia van Solms, now in the collection of the Musée Jacquemart-André, hangs seventh from the left and Man with a Sword, The Leiden Collection, New York, hangs ninth from left.

Cabinet 24, walls A–B. The Polish Rider, now in The Frick Collection, hangs on the far right.

Cabinet 25, walls B–C. Flora, now in the collection of The Metropolitan Museum of Art, hangs on the far left.

Cabinet 25, walls A–B. Portrait of an Old Woman Cutting Her Nails, now in the collection of The Metropolitan Museum of Art, hangs second from left.

Room 28, wall B. Portrait of a Lady, now in the collection of the Rijksmuseum, hangs second from the right.

The 14 mounted silver collodion photographs in this folio highlight the preparation and installation in Amsterdam of the 1898 Rembrandt tentoonstelling [Rembrandt Exhibition], which commemorated the coronation of Holland’s new queen, Wilhelmina. The ambitious exhibition, consisting of 124 paintings and 350 drawings and etchings, was an homage both to the Queen and to Rembrandt, one of Holland’s most famous artists. It included Rembrandt’s monumental canvas The Nightwatch pictured in transit across the Museumplein to the Stedelijk  Museum (modern spelling), where it was shoehorned in through a window. Curator Hofstede de Groot envisioned a monographic exhibition featuring Rembrandt’s entire body of work, but 400 paintings from his oeuvre were instead displayed in photographic reproductions.

Four paintings currently in the National Gallery of Art collection were featured in the Amsterdam exhibition from September to October 1898: Portrait of a Gentleman with a Tall Hat and Gloves, Portrait of a Lady with an Ostrich-Feather Fan, The Circumcision, and Head of an Aged Woman. Rembrandt’s Self-Portrait and The Mill were included in the exhibition’s installation at the Royal Academy in London from January to February 1899. This second show featured a different selection of works, many from British institutions and private collections.

“The Dutch could have paid no nobler homage to their young Queen and her coronation, than by bringing together a collection of the masterpieces of the greatest painter to whom Holland has given birth.”

“The number of foreigners who crowded to Amsterdam during September and October to see the Rembrandt-Exhibition was indeed enormous.”

For more information, see these catalogs in the National Gallery of Art Library:

The library is open during the East Building closure, weekdays, except Federal holidays, from 11:00 a.m. to 4:00 p.m. Appointments are required to use the library. Request an appointment.