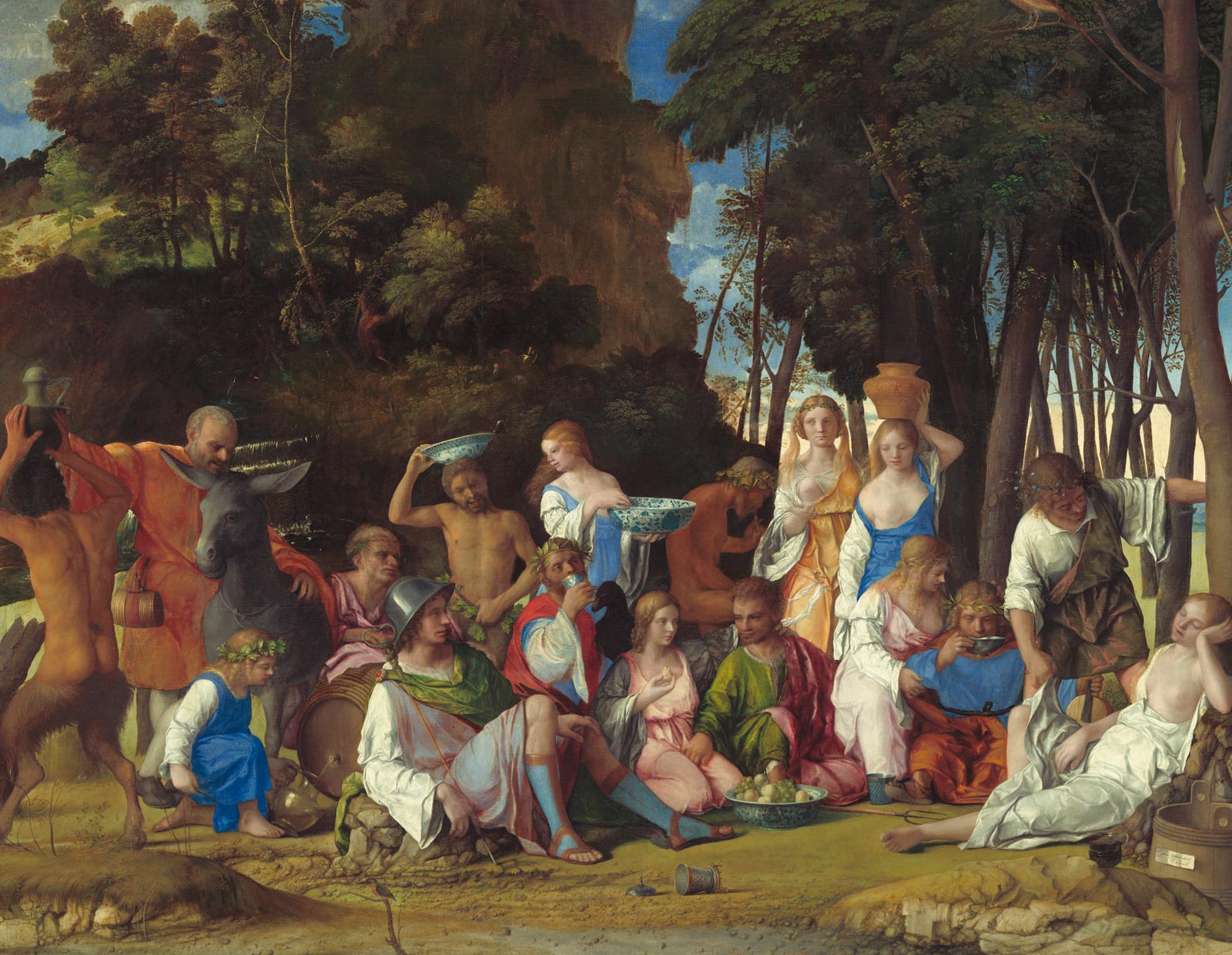 Letter from Titian to Alfonso d’Este, Duke of Ferrara

Perhaps ’s letter was meant simply to flatter, but his words—and this painting—point to the powerful role played by Renaissance patrons. To modern sensibilities it seems unthinkable that anyone would order significant parts of a work by —father of the Venetian Renaissance—painted over, but that is just what Alfonso d’Este did. Twice. Ultimately Titian, painter to popes and princes, and a student of Bellini’s, brought to its current state. In a real sense, though, Alfonso must equally be counted among its “artists.” Feast of the Gods is not only the most important mythological painting from the Renaissance in North America, but it is also perhaps the most intriguing.

It was commissioned for Alfonso’s private study in Ferrara, called the camerino d’alabastro. This was a retreat where the duke could admire his collection of ancient medals and statuettes and enjoy pastoral scenes of gods and goddesses reveling in the delights of love and nature. Paintings such as Feast of the Gods, which illustrates a ribald episode from Ovid, appealed both to Alfonso’s taste for the sensual and to his interest in antiquity. Working with a humanist scholar, the duke originally conceived an entire suite of bacchanals painted by the finest artists of the day, including Raphael and Michelangelo (whose commissions never materialized). All were to celebrate Bacchus and Venus, the gods of wine and love. Feast of the Gods was the first of the works to be completed, in 1514. It was the last major painting by Bellini, who was almost 90 years old when he finished it. As Albrecht Dürer said, he was “very old, but still the best there is.” It was Bellini who first mastered the luminous color that would be the glory of Venetian painting for centuries to come.

When Bellini died two years later, Alfonso turned to Titian, the most brilliant of Bellini’s pupils, and to his own court artist, Dosso Dossi, to complete his bacchanal project. In all, four of the camerino bacchanals are known today. When the camerino was dismantled in 1598, an inventory listed “a painting by Bellini with a landscape by Titian.” Clearly, this referred to the Feast of the Gods, and closer examination shows two distinct artists at work. Compare the background on the left and right sides. On the right, a screen of tree trunks is thinly painted with the same detailed precision that is found in the figures. This is Bellini’s meticulous style. On the left, wild mountain terrain, animated with tiny satyrs and running stags, is brushed with Titian’s freer style. Art historians had long concluded that Alfonso asked Titian to “touch up” Feast of the Gods, probably to harmonize it with his own bacchanals.

But x-ray and infrared studies reveal that Titian had not been the first to alter Bellini’s original composition. Bellini’s once-continuous screen of trees below Titian’s mountain had already been replaced on the left side by a low hill set with classical buildings. In all likelihood this change had been made by Dosso to satisfy the duke’s  taste for antiquity. Dosso also added bright green foliage to Bellini’s trees on the right. Of all Dosso’s contributions, it is only this foliage—and the pheasant sitting somewhat awkwardly in its midst—that Titian left unaltered in his own later campaign of repainting. Did Alfonso, an amateur painter who was reported to fancy pheasants, paint the bird himself? Did Alfonso “picture” himself in another way as well? Some evidence suggests that Feast of the Gods contains cryptic references to the duke’s marriage to Lucrezia Borgia, perhaps even portraits of the couple.

Giovanni Bellini was probably born in Venice around 1430. Part of an illustrious family of artists that included his father Jacopo, brother Gentile, and brother-in-law Andrea Mantegna, he was among the first artists in Italy to master the new techniques of painting with oils, producing the luminous color that would characterize Venetian art for centuries to come. He fully absorbed the Renaissance innovations made by artists in Florence and remained open to new influences during his long career. Bellini was also a generous teacher—his pupils included Giorgione and Titian.

Early in his career he devoted himself—and his busy workshop—to the production of religious paintings, including large altarpieces and smaller devotional images, especially images of the Virgin and Child, whose iconlike serenity and dignity drew on Venice’s Byzantine tradition. Throughout his life religious paintings continued to make up the largest part of Bellini’s output. All of his religious figures—as well as the sensitively painted landscapes they inhabit—are suffused with light and imbued with a spiritual presence.

Bellini was also a prolific portraitist, particularly during the 1480s and 1490s, helping to popularize a genre that was virtually unknown until the 1470s. Most of Bellini’s portrait subjects exhibit a reserved and somewhat generalized appearance, more reflective of their dignity and status than of personality. He worked for Venice’s patricians as well as for wealthy merchants and their religious confraternities. He also received major public commissions from the Venetian Republic. Despite pressures from powerful patrons for works celebrating themes from antiquity, Bellini resisted painting mythological subjects until late in life. When he did, he approached their unfamiliar erotic elements—not a natural fit for his more formal style—directly and with humor, taking cues from younger painters.

In a career that spanned more than 70 years, Tiziano Vecellio, called Titian in English, was the greatest force in Venetian Renaissance painting. Probably born around 1490 in the town of Cadore in the Italian Alps, Titian moved at an early age—perhaps as young eight or nine years old—to Venice to study art there. After training briefly with a mosaicist, he entered the workshop of Giovanni Bellini, the leading painter of his generation. Titian was influenced not only by Bellini’s rich color but by the lyrically elusive pastoral and mythological scenes of fellow Bellini pupil Giorgione.

By 1510 Titian had established himself as an independent master, and after Bellini’s death he was appointed official painter to the Venetian Republic. Following a succession of commissions for the courts of Ferrara, Mantua, and Urbino, Titian’s fame spread internationally. His patrons included the Holy Roman Emperor Charles V, Philip II of Spain, Francis I of France, and Pope Paul III.


NGA Images
Download a digital image of this work

Titian was a master in all genres: he produced dignified and insightful portraits, Madonnas of modesty and charm, playfully joyous mythological pictures, sensuous nudes, and meditative religious works. He took from Bellini a typically Venetian approach to color, his early works often juxtaposing brilliant contrasting hues. After about 1530, the year of his wife’s death, Titian more often worked within a more narrow tonal range, using subtle glazes to create complex nuances of color. During the last 20 years of his life, Titian's handling of paint grew looser, opening up a wider gamut of expressive possiblities. Thin glazes appear along with heavy impasto, each a mark of the artist’s own presence on the canvas.

Titian died in 1576, as an outbreak of the plague roiled through Venice, but it is not known if he died of the disease. He was buried in Santa Maria Glorisa dei Frari, where his dramatic altarpiece, The Assumption of the Virgin, had been installed nearly 60 years before.