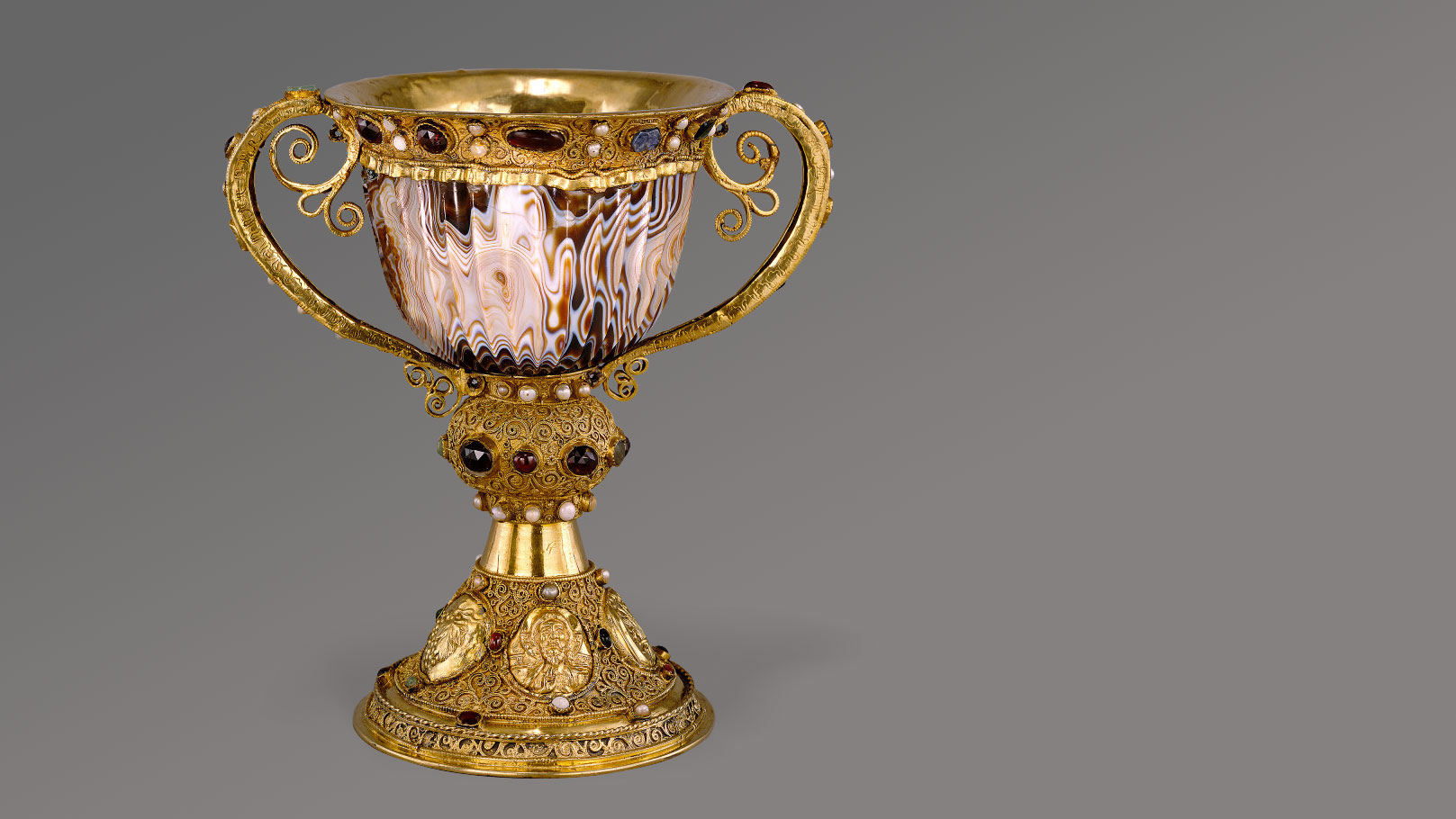 Chalice of the Abbot Suger of Saint-Denis

This chalice is among the great treasures of the Middle Ages now in the United States. It was present at the very birth of Gothic style. The Ambulatory of Saint-Denis

, an ancient sardonyx cup set in gold mounts in the 12th century, was among the vessels that were used to celebrate a Mass on June 11, 1144, at the abbey church of Saint-Denis, north of Paris. In attendance were French king Louis VII and his queen Eleanor of Aquitaine, 18 bishops and archbishops, including the archbishop of Canterbury, and delegates from royal courts across Europe. They had come for the consecration of altar chapels in a new ambulatory behind the main altar—a revolutionary structure that is usually recognized as the first expression of Gothic architecture. Built by the abbey’s ambitious abbot, Suger (1081–1151), the ambulatory was released from the downward thrust of older Romanesque spaces by soaring vaults, arches pointing heavenward, and walls made transparent with light. Jewel-like colors streamed to the altar from stained-glass windows to fall on this and other precious liturgical vessels. Like the building itself, the chalice reflects the abbot’s belief that beautiful things were not only fitting and proper in the celebration of God’s glory but that beauty, by its very nature, could transport the souls of men to contemplation of the divine.

The Ambulatory of Saint-Denis A series of engravings from about 1700 shows how the abbey treasures were then arranged in cabinets. Suger’s chalice, labeled R, appears at the lower right.

Suger wrote extensively about his work at the abbey. In this passage he describes his response to two other treasures from Saint-Denis: the Cross of Saint Eloi (which can be seen in a later painting, above) and what he referred to as the “Crest,” later called the Screen of Charlemagne. His words suggest a path from beauty to the divine.

Often we contemplate, out of sheer affection for the church our mother, these different ornaments both new and old... then I say sighing deeply in my heart: Every precious stone was thy covering, the sardius, the topaz, and the jasper, the chrysolite, and the onyx, and the beryl, the sapphire, and the carbuncle, and the emerald....

Thus, when—out of my delight in the beauty of the house of God—the loveliness of the many-colored gems has called me away from external cares, and worthy meditation has induced me to reflect, transferring that which is material to that which is immaterial, on the diversity of the sacred virtues: then it seems to me that I see myself dwelling, as it were, in some strange region of the universe which neither exists entirely in the slime of the earth nor entirely in the purity of Heaven; and that, by the grace of God, I can be transported from this inferior to that higher world in an analogical manner.

[Suger, On the Abbey Church of St.-Denis and Its Art Treasures, ed. and trans. by Erwin Panofsky and Gerda Panofsky-Soergel (Princeton, 1979), 63–65.]

Other objects Suger dedicated at Saint-Denis are now in the Louvre’s collection. These objects, like the Gallery’s chalice, reveal his delight in refashioning materials that were ancient or exotic: a Sassanid rock crystal bottle given to him by Eleanor of Aquitaine, a Fatimid rock crystal flask, and a porphyry vase from Egypt or imperial Rome that he fitted with gilded mounts to create a magnificent eagle. This watercolor from the 17th century provides evidence about later modifications to the chalice: the stone foot of the cup is now covered by the jeweled band above the knob, and extensions were made to the handle scrolls.

The chalice is a subtle blend of old and new, East and West. The cup’s material, style, and refinement suggest that it was probably carved in Egypt during the 2nd or 1st century BCE; it arrived in France centuries later perhaps via Jewish merchants or traders. It is made from a single piece of sardonyx. Inside, the bowl is smooth, but on the exterior deep, elegant flutes open the stone's folded bands of color. Suger’s reuse of an ancient vessel reflected his appreciation for the lofty reputation of Byzantium, where, over centuries, emperors had amassed masterworks of Greek and Roman art and rededicated them to Christian purposes. It also signaled his desire to rival Byzantium’s opulence. The gold and gem-studded mounting was made at Suger’s behest. It was probably fashioned in France, possibly in a workshop in the Île-de-France, along with mounts for some of the other objects Suger dedicated at Saint-Denis. The stones seen today are paste replacements of the original rubies and sapphires, and parts of the mounting have also been modified. The chalice is, however, immediately recognizable in a watercolor made in the 1600s and in a series of engravings documenting the abbey treasury, published in 1706. Only one of the original discs on the base survives. It is an iconic Byzantine image of Christ Pantokrator (the all powerful) but incorporates the Alpha-Omega formula that was used in the West. Other, now-lost roundels probably depicted Saint Denis and his companions. Their modern replacements are decorated with grain and grapes, symbolic of the Eucharistic bread and wine. Abbot Suger
From the Infancy Window, the Annunciation Panel, Saint-Denis

Suger, barefoot and in his monk’s robe, included himself as a supplicant in this stained-glass panel from his new ambulatory. His name appears above. He also had his name inscribed on some of the liturgical vessels used at Saint-Denis, though not on the Gallery chalice.

Saint Denis was the original apostle to the Gauls and a patron saint of France. According to legend he was decapitated for his faith but carried his own severed head miles to the abbey site, where he died; the head had continued to preach along the entire way. The saint and the abbey had been associated with the French royal family since the very beginnings of the monarchy in the 5th century. Founded by Frankish king Dagobert in the 7th century, the abbey church continued to be the traditional burial place of French kings. Only three kings of France were not buried there. The chapel’s prominence can be gauged by the status of those who attended the rites in 1144, their names all carefully recorded in Suger’s own records.

More in the Collection
Decorative Arts

Suger was not only an energetic church administrator but one of the most powerful men in France. A friend and advisor to two kings, he ruled as regent during Louis VII’s absence during the Second Crusade (1145–1149). His expansive account of the building of Saint-Denis provides a wealth of detail about the institution’s administration and furnishing, and much about Suger’s own activities. It does not name, or even mention, the architect who must have been primarily responsible for the new ambulatory.

Royal patronage made the treasury of Saint-Denis the richest in France, but many objects were lost following the French Revolution in 1789. Parts of the sculptural decoration were also ripped away. Suger’s chalice, along with a number of other treasures, was made part of the French national collection and housed in the Louvre before it was taken to England and eventually made its way into the collection of the National Gallery of Art.