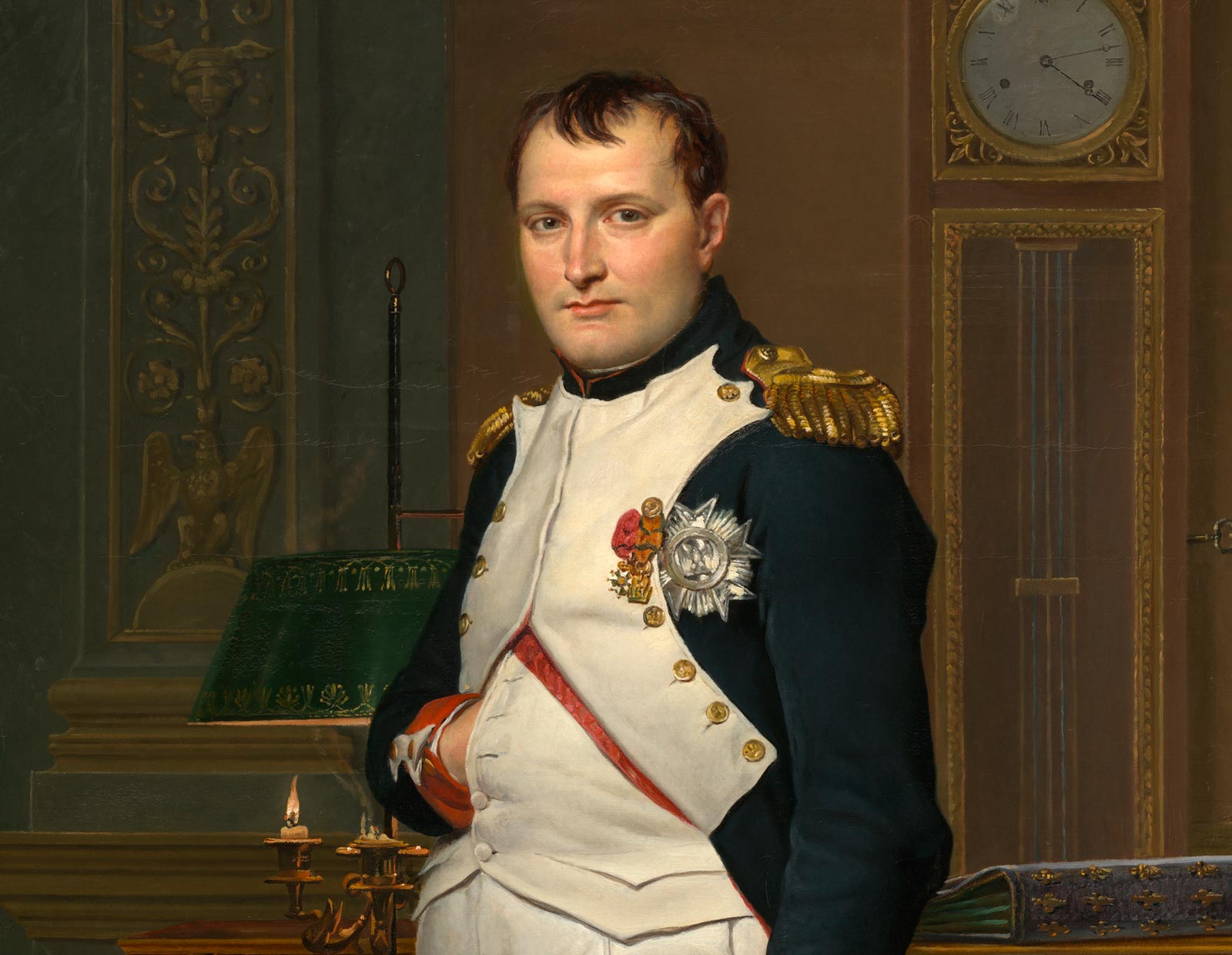 The Emperor Napoleon in His Study at the Tuileries

Commit to the canvas the features of the Great Man, and represent him in one of the historic moments that have made him immortal.

Alexander, Marquess of Douglas and Clydesdale (Scotland) and commissioner of the portrait in a letter to Jacques-Louis David, 1811

seems not to have completely heeded his patron’s request: , who rose to become emperor in the political vacuum following the French Revolution, is captured in statesmanlike quietude rather than a more glorious episode in his storied career. While the posed attitude and the picture’s full-length format convey formality, the portrait’s time and place—inside the emperor’s private study, in the wee hours of the morning—convey an intimate view of this very public figure. The lush fabrics, textures, clear colors, and enamel-like surfaces of the painting create an effect that is convincing and vivid.

Napoleon took up residence in the Tuileries Palace in Paris after appointing himself emperor in 1804, the year in which this picture is set. Careful details—the clock at 4:13, the lamp’s nearly spent candle, early morning light seeping into the chamber at the left—indicate that the emperor is burning the midnight oil. He grasps a golden snuff box—whose contents would have helped him stay awake. The ruler’s hair is rumpled, stockings bagging slightly around his ankles.

On the desk is the product of the emperor’s all-nighter, quill pen now set aside—a sheaf of papers bearing the letters “COD.”  This is the French Civil Code, or Code Napoleon. Enacted in 1804, it superseded a hodgepodge of church and royal ordinances that had previously governed daily life, replacing them with a patriarchal system of personal rights. The code still informs French law today. Other details are concrete symbols of Napoleon’s indomitable rule. A map partly unrolled on the floor, sword propped in the chair, and lion finial of the desk represent him as a conquerer, prepared for battle. The blue uniform with red cuffs is that of the foot grenadiers of the Imperial Guard; Napoleon preferred to wear soldier’s garb on certain dress occasions to signify solidarity with his troops. Under the desk, Plutarch’s volume Lives of the Noble Greeks and Romans associates Napoleon with the great leaders of the past. Decorative golden bees sewn into his velvet chair are a 5th-century emblem associated with the first French rulers. Note the letter “N” carved into the legs of the desk. This artfully contrived yet realistic tableau reveals itself to be a masterful work of propaganda.

It may seem unusual that a Scotsman would commission a French painter to create such a work. The marquess (later 10th Duke of Hamilton) was an avid art collector and Francophile. He also harbored grander ambitions and commissioned the painting in the interest of fostering friendship between France and Scotland, choosing David, Napoleon’s official painter, for his project in cultural diplomacy.

Before dispatching the painting to the marquess, the artist hosted a private exhibition of the completed picture in his studio, where the work was widely admired and said to be an excellent likeness. The image influenced many subsequent portrayals of Napoleon—the hand in the waistcoat gesture connoting self-control became his motif—and introduced a new kind of realism to French painting.

Jacques-Louis David’s career spanned the upheavals of late 18th- and early 19th-century France, including revolution, the gutting of the monarchy, counter-revolution, the advent of a self-appointed French emperor (Napoleon), and finally restoration of the monarchy. If this period of history was turbulent and overwrought, David’s paintings are solemn by contrast, capturing and allegorizing the ideals, major personages, and events of the period with cool austerity and grandeur. David has come to embody the rise of neoclassical art, grounded in an emulation of the clean lines of ancient sculpture, and rejecting the fantastical and decorative rococo style that came to symbolize the excess of the French monarchy.

David was born in Paris, his father an iron merchant, his mother’s family architects and stonemasons. His father died in a duel when Jacques-Louis was nine, and his mother’s family directed his artistic training, installing him as an apprentice in the studio of a Parisian artist. When he was 18, he entered the Académie royale, a training ground for court painters whose governors determined acceptable artistic styles; its imprimatur was critical to an artist’s success.

Winning the Prix de Rome, a travel prize administered by the Académie, took David to Italy in 1774. He stayed five years, absorbing the lessons of Renaissance paintings and Greek and Roman sculpture, joining a circle of artists emulating those works in a new way. He returned to France a master of the neoclassical style, receiving accolades from the Académie and commissions from wealthy patrons. He founded a thriving studio through which passed hundreds of students—most notably Jean-Auguste-Dominque Ingres. He also married Marguerite-Charlotte Pécoul, an alliance that provided financial security.

By the late 1780s, the monarchy’s corrupt ways and widespread class inequality spurred an angry uprising among the working class. David became politicized through a conflict he had with the Académie, an institution of privilege and exclusivity. Eventually he became a kind of art director for the Revolution, staging events and pageants, supporting Louis XVI’s and Marie-Antoinette’s executions in 1793. Several art commissions David undertook during the period illustrate events and figures of the Revolution, but they were left incomplete as the political winds shifted. His career as a revolutionary ended when he was arrested and imprisoned following the execution of his compatriot Robespierre, who instigated the Reign of Terror. David was eventually freed owing to poor health.

The young General Napoleon, whom David admired and met in 1798 prior to his seizure of power in France, became his next patron. Following Napoleon’s self-coronation as emperor in 1804, David became premier peintre. Gradually, however, he lost favor with the emperor, who tired of David’s politicking within the court and his exorbitant fees. When Napoleon was overthrown and the French monarchy restored in 1815, David, along with other “regicides”—signers of Louis XVI’s death warrant—was exiled to Brussels.

In Brussels, at age 68, David re-established himself once more as a successful portraitist. He died there in 1825, never having returned to France.

Jacques-Louis David, Classical Sculpture of a Woman with an Outstretched Arm, 1775/8