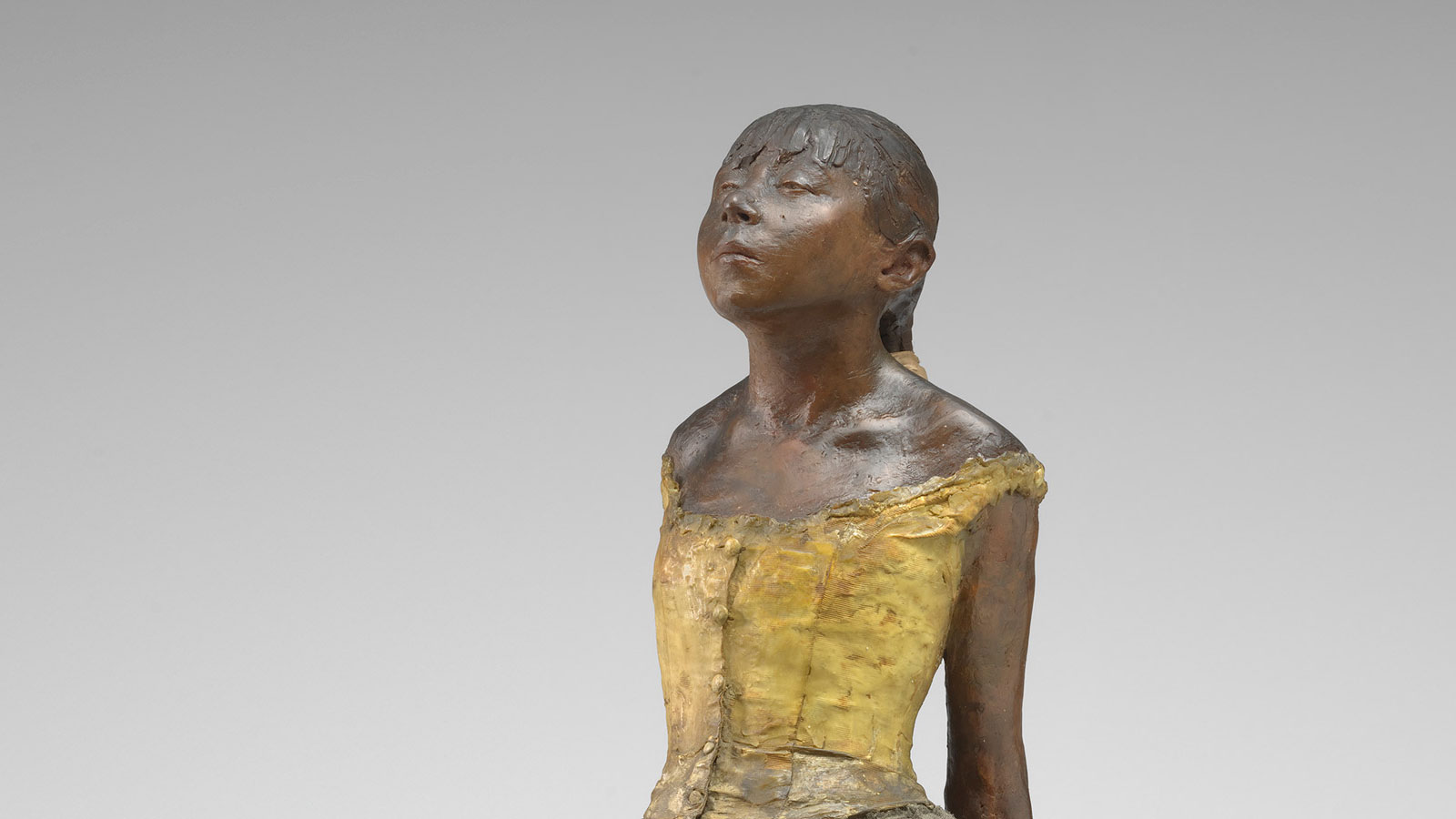 The bourgeois admitted to contemplate this wax creature remain stupefied for a moment and one hears fathers cry: 'God forbid my daughter should become a dancer.'

Now adored, this original wax version of ’ was reviled by most critics when it was shown at the 1881 impressionist exhibition in Paris. Art critic Elie de Mont was flabbergasted: “I don’t ask that art should always be elegant, but I don’t believe that its role is to champion the cause of ugliness.” The diminutive figure, the only sculpture Degas exhibited publicly, was described variously as “repulsive,” “vicious,” and “a threat to society.” Modeled in colored wax and adorned with real hair and a fabric costume, Little Dancer decisively broke with 19th-century academic practice by introducing unusual mixed materials and frankly representing a provocative modern subject; Degas added to the controversy by exhibiting it like an anthropological specimen in a glass vitrine.

Degas’ uncannily realistic depiction of an “opera rat,” as young dancers with the Paris Opera ballet were known, was a deeply unsettling challenge both to academic tradition and to French bourgeois society. It forced viewers to confront the seamy side of the ballet, the cultural institution at the center of metropolitan life. The rats, including the model for this figure, mostly came from working-class families and were popularly understood to be vulnerable to moral corruption at the hands of well-off suitors. Degas visualized this potential link with vice by flattening the model’s facial features, exaggerating the low forehead, and making the jaw protrude, adjustments that conformed to popular scientific notions that linked physiognomy and degeneracy. His novel use of unorthodox materials—hair, silk hair ribbon, linen bodice, muslin tutu, and satin slippers—underscored his determination to make naturalism rather than idealization the standard for modern sculptural practice.

Little Dancer is an unflinching look at a troubling working-class subject, but it is also endowed with humanity. Poised between girl and woman, the bony figure of model Marie van Goethem, her body shaped by endless practice, is simultaneously vulnerable and proud. Her stance atop a wooden base reminiscent of a rehearsal floor is casual by ballet standards, but far from relaxed. The right foot is placed far forward and turned out 90 degrees. Her arms are stretched uncomfortably behind her back, the fingers of both hands intertwined. With her shoulders back and her head held high and slightly upturned, her posture is erect and dignified, even haughty, a bearing emphasized in ballet training, but here particularly poignant.

Degas never exhibited the sculpture again, and Little Dancer was largely forgotten until it was rediscovered, together with dozens of other wax sculptures, in the artist’s studio after his death in 1917. Most of these original sculptures are now in the National Gallery of Art’s collection, while bronze casts made from these wax originals after Degas’ death can be found around the world.

Outside a close circle of friends, Degas’ fascination with making sculpture was little known during his lifetime. His sculptural work was largely private and exploratory, and he only ever exhibited one piece: the National Gallery of Art’s original wax version of Little Dancer Aged Fourteen (1878–1881). But when his studio was inventoried after his death in 1917, more than 150 sculptures, mostly in wax, were discovered. Many were in pieces and badly deteriorated but more than 70—representing mostly dancers, horses, and women—were salvaged and repaired.

Degas’ heirs contracted with the French foundry Hébrard to cast the repaired sculptures in bronze even while preserving the original wax figures (which for many years were thought to have been lost or destroyed). Beginning in 1919, Hébrard set out to make 22 casts of each sculpture; some series were not finished, but the foundry cast at least 25 copies of the Little Dancer. This is why bronze versions of Little Dancer and other Degas sculptures are now found in many collections internationally.

In the 1950s Paul Mellon (1907–1999), a benefactor of the National Gallery of Art, bought the 69 known surviving sculptures that Degas had created during his lifetime (several were destroyed in the casting process). Mellon eventually donated 52 of these works to the Gallery, making it the largest repository of Degas’ original sculptures.

The eldest son of a Parisian banker, Edgar Degas reinforced his formal academic art training by copying old master paintings both in Italy, where he spent three years (1856–1859), and at the Louvre. Degas early on developed a rigorous drawing style and a respect for line that he would maintain throughout his career. His first independent works were portraits and history paintings but in the early 1860s he began to paint scenes from modern life. He started with the world of horse racing and by the end of the 1860s had also turned his attention to the theater and ballet.

Soon after a trip to New Orleans, where his uncle and two of his brothers worked in the cotton trade, in 1873, Degas banded together with other artists interested in organizing independent exhibitions without juries. He became a founding member of what soon would be known as the impressionists, participating in six impressionist exhibitions between 1874 and 1886.

Despite his long and fruitful association with the impressionists, Degas preferred to be called a realist. His focus on urban subjects, artificial light, and careful drawing distinguished him from other impressionists, such as Claude Monet, who worked outdoors, painting directly from their subjects.  A steely observer of everyday scenes, Degas tirelessly analyzed positions, gestures, and movement.

Degas developed distinctive compositional techniques, viewing scenes from unexpected angles and framing them unconventionally. He experimented with a variety of media, including pastels, photography, and monotypes, and he used novel combinations of materials in his works on paper and canvas and in his sculptures. He primarily viewed his sculpture as a means of researching movement and publicly exhibited only one, Little Dancer Aged Fourteen (1878–1881).

Degas was frequently criticized for depicting unattractive models from Paris’ working class, but others, like realist novelist Edmond de Goncourt, championed Degas as “the one who has been able to capture the soul of modern life.” By the late 1880s, Degas was recognized as a major figure in the Parisian art world. Financially secure, he could be selective about exhibiting and selling his work. He also bought ancient and modern works for his own collection, including paintings by , , and , who became close friends. Depressed by the limitations of his failing eyesight, he created nothing after 1912; at his death in 1917, he was hailed as a French national treasure. About 150 deteriorating clay and wax sculptures were found in Degas’ studio following his death. Their existence had been unknown to all but Degas’ closest associates.

More Works by Degas in the Collection

Edgar Degas, Dancer Seen from Behind and Three Studies of Feet, c. 1878