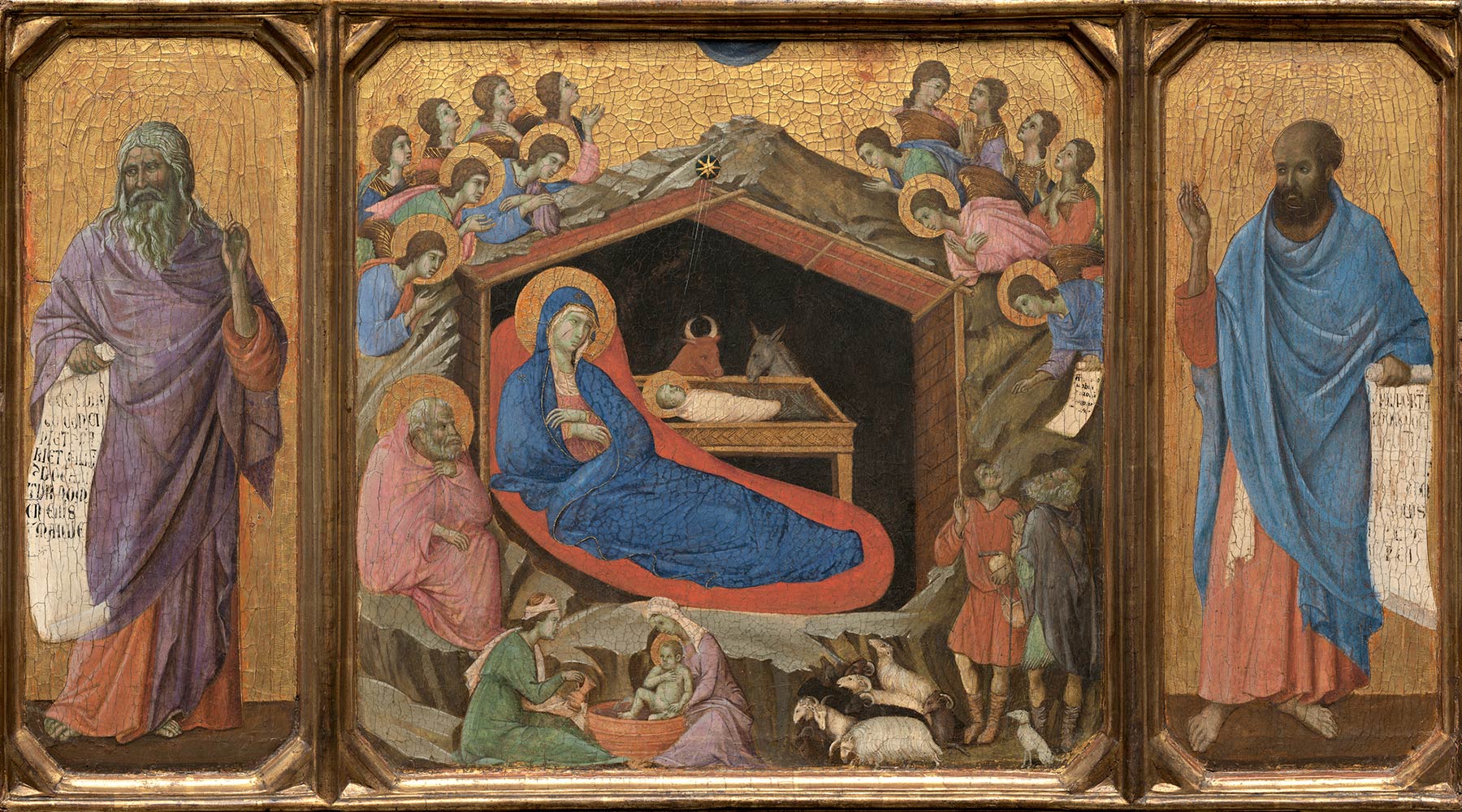 The Nativity with the Prophets Isaiah and Ezekiel

"On the day on which it was carried to the Duomo, the shops were locked up . . . and all the populace and all the most worthy were in order next to the said panel with lights lit in their hands, and then behind were women and children with much devotion; and they accompanied it right to the Duomo . . . sounding all the bells in glory out of devotion for such a noble panel as was this."

—Anonymous mid-14th-century description of a procession to carry Duccio’s Maestà from the artist’s studio to the Siena Cathedral (L. A. Muratori, Rerum italiarum scriptores (Bologna, 1931–1939), xv/6, 90)

The small tripartite painting, , was once part of a massive wood-paneled altarpiece of nearly 16 by 15 feet—the “noble panel” joyfully paraded through the streets of Siena on a summer day in 1311. Its point of origination was ’s studio where it had been built and painted; its destination, Siena Cathedral, a Gothic edifice distinguished by its horizontal bands of greenish-black and white marble. The altarpiece remained at the cathedral for the next 450 years. It was practically an element of Gothic architecture itself, elaborately topped with pinnacles and gables resembling the cathedral’s façade, the whole outlined with gilded framing, supported by buttresses (for it was freestanding), and likely situated on the high altar beneath a four-posted baldachin, or ceremonial canopy. The focal point of this towering shrine was a luminous, gilded expanse of painting depicting the Virgin and child enthroned. It is this scene that gives the altarpiece its name, the Maestà, meaning Virgin in majesty. The Nativity with the Prophets Isaiah and Ezekiel occupied a place on the left side of the predella, or horizontal series of paintings forming the base of the altarpiece. The reverse of the altarpiece comprised a complex array of 40 detailed vignettes from the life of Christ and his Passion.

Church documentation records the purchase of candles to light the altarpiece within the cathedral’s dim interior: 150 for the front side (visible to the congregation) and 80 for the reverse (seen by church canons who would have sat behind it during a service). In an age when most people had very limited exposure to images, it would have been an awesome sight worthy of the veneration due its subject, the Virgin, Queen of Heaven. The Nativity scene, although a component of the original Maestà, played a more modest role. Smaller and more human-scaled, the Nativity was positioned low on the altarpiece and required a closer approach in order to see its details, creating a more intimate relationship between the onlooker and the miraculous, yet humble aspects of Christ’s first night on earth. Here, Mary reclines on a red cushion, gazing toward the Christ child who is watched over by an ox and ass, in whose manger he rests. Although Mary appears to float against the flat red ovoid shape, her body has mass and is suggested beneath her royal blue robes. Her gesture of gathering her garment about her is familiar and may portend the chilly winds of the future that await her child. Her scale, twice that of any other figure, allows her to be read as the protagonist of the composition. Above, angels express their adoration, eagerly leaning over the parapet to catch a glimpse of the child. Multiple vignettes pictured around central figure of the Virgin narrate different aspects of the birth—an angel announces the birth to shepherds accompanied by their flock and a dog at right, while women bathe the child on the left. Joseph, at left with pink cloak and halo, is separated from Mary and the child to underscore the immaculate birth—he is not the child’s father. Other symbols, such as the semicircle above Mary at the top of the panel (heaven) and the eight-sided star that lights the way to Christ’s side, are familiar ones in Christian iconography, which Duccio followed in every respect. The prophet Ezekiel from the Old Testament stands on the right side of the Nativity, turned toward the scene. His Latin scroll refers to the Virgin birth. Isaiah, on the left, faces toward what is the predella’s first scene, the Annunciation and prophecies, “Behold, a virgin shall conceive and bear and son, and his name shall be called Emmanuel.”

Duccio and the Cult of the Virgin

The greenish appearance of the faces of figures in The Nativity with the Prophets Isaiah and Ezekiel, especially pronounced on the face of the Virgin, was not an early painting style. Duccio worked with egg tempera paints, which were thin, quick-drying, and had to be built up painstakingly with small paint strokes. A color called green earth was frequently used as a base upon which layers of tempera were painted to create flesh tones. Over time, the layers of flesh-toned paint have abraded and thinned, allowing the green to show through. In addition, art restorers of the 18th and 19th centuries often worked on the main figures of a painting with particular zeal and “cleaning” efforts may have accelerated the loss of the flesh-toned paint on the main figures such as the Virgin, who is a bit greener than the figures of Isaiah and Ezekiel on either side of her.

The Virgin Mary held an exalted place in the hearts and devotions of the Sienese; a group of church and city leaders dedicated their city to her in 1260, invoking her power as civic protectress and Mother of God. Her image became omnipresent as an icon of veneration, offering the faithful a tangible intercessor between themselves and God. A Marian cult developed as early as the 5th century within the Byzantine Christian church and her image as a devotional icon was employed extensively in frescos, mosaics, and portable panel paintings from which altarpieces developed. Duccio’s altarpiece carries these traditions forward: strongly associated with Byzantine art are the rich materials and hues used to accentuate the figures’ regal status as monarchs of heaven with visible golden halos and lavish garments; but, the rigid and schematic appearance of the Byzantine Mary is made softer, more fluid, and volumetric in Duccio’s hands. Religious currents of the time may have effected her transformation—increasingly influential mendicant Franciscan and Dominican preachers espoused an empathetic, humanistic understanding of Christ’s life and sufferings. Artists began to evince earthly attributes in their work in addition to the divine. Figures became weightier and gravity-bound, placed in relationship to their settings, which became deeper and enveloping, rather than glittering, decorated space around them.

Disassembly of the Maestà

Duveen’s Trade During the Nazi Era

The Nativity with the Prophets Isaiah and Ezekiel was one of the pieces of the front predella separated from the Maestà in 1771. Eventually, the Museum Kaiser Wilhelm Friedrich in Berlin purchased it and it remained on display until 1938. At that time, a Nazi-appointed museum director purged most non-Teutonic art from the collection. The Nativity and Prophets panel was among those tagged for removal. Art dealer Joseph Duveen brokered a trade of a Hans Holbein painting, Portrait of a Man with a Lute, 1497/1498, for two Berlin works: the Duccio panel and ’s . Andrew Mellon subsequently purchased The Nativity with the Prophets Isaiah and Ezekiel from Duveen for the National Gallery of Art collection. The Holbein is on view in Berlin.

The Maestà altarpiece remained in place at the high altar of the Siena Cathedral until 1506 when it was partially dismantled, relegated to side chapels and replaced by a 15th-century bronze tabernacle by Vecchietta, which remains there today. In 1771 the entire altarpiece was dismembered. A cathedral inventory details a carpenter’s “work” on it—sawing the whole into seven vertical pieces, and then sawing each of those pieces in half laterally to separate the front scenes from the back. Different pieces were then reassembled to re-form discrete scenes. The overall framing that had separated the different scenes of the main panels was removed and since lost. The front and back predellas were divided into separate scenes and the crown, or upper band of paintings and pinnacles, removed. These fragments were displayed in different areas of the cathedral, and over time, some were lost or sold to collectors and museums. By 1878, the front, back, and other pieces still remaining in possession of the cathedral were reassembled and placed in the adjacent Museo dell’Opera del Duomo. Missing paintings and architectural elements, and lack of documentation by Duccio or others as to the appearance of the whole, have left scholars to make the best-informed guesses they can about the Maestà’s original form. The restored and partially reassembled altarpiece remains on view at the Museo dell’Opera del Duomo in Siena.

The events of Duccio’s life can be only partially drawn through a constellation of points offered by civic records, contracts, and the political and cultural life of Siena, the city in which he was born and worked. The Maestà came towards his life’s end and was the pinnacle of his achievement.

Duccio may have trained with the Italian painters Guido da Siena or Cimabue. His first artistic commissions were to paint ceiling coffers and biccherne covers, small panel paintings that bound the volumes containing Siena’s financial records. Siena’s governors took great pride in their city’s prosperity and their fiduciary responsibilities, and commissioned the best native artists to decorate the books, which were publicly displayed.

Duccio’s approximately 12 existing works include commissions from Siena’s city leaders but also from Florence, where the Dominican church Santa Maria Novella commissioned his Rucellai Madonna, indicating a reputation beyond his home base. Siena, while not a port or river city, was along a major route used by pilgrims traveling from Rome to France during the years of the Avignon papacy, which stimulated cultural and economic activity and competition. The great oculus window originally situated above the apse of the Siena Cathedral, directly above the altar, was attributed to Duccio only in 1943, when it was removed from the Cathedral for safekeeping during World War II. Today it is housed in the Museo dell’Opera alongside the Maestà.

Duccio’s work and occasional appearance in civic records (that show infractions for non-payment of taxes and occasional unruly behavior) situate him in Siena for most of his life. For a period around the turn of the 14th century scholars place him in Paris or Rome, where he may have absorbed other artistic influences. By the time of the Maestà commission, Duccio was managing a large studio in Siena where the painters Pietro and Ambrogio Lorenzetti and Simone Martini were likely to have trained (works by and are also in the NGA collection). Contracts show that the Maestà was undertaken in stages, without the entire program of the work being outlined in advance. The scale of the project indicates that Duccio likely enlisted a number of other artists to work on it, especially with respect to the rear panels, and that he was under some pressure to complete the whole in a timely fashion. Nonetheless, its unified nature suggests that Duccio strongly directed the other artists.

Political considerations also have shaped our understanding of this artist and his contributions to Western art over time. In the 13th century, Florence and Siena were bitter rivals, the former aligned with the Papacy, the latter with the authority of the Roman Emperor, a position Siena was forced to cede in 1268. Over time, Florence assumed a greater economic and cultural significance, its classically-inspired art more closely associated with the flowering of the Renaissance, while Sienese art became associated with an older style, based in archaic Greek or Byzantine models.