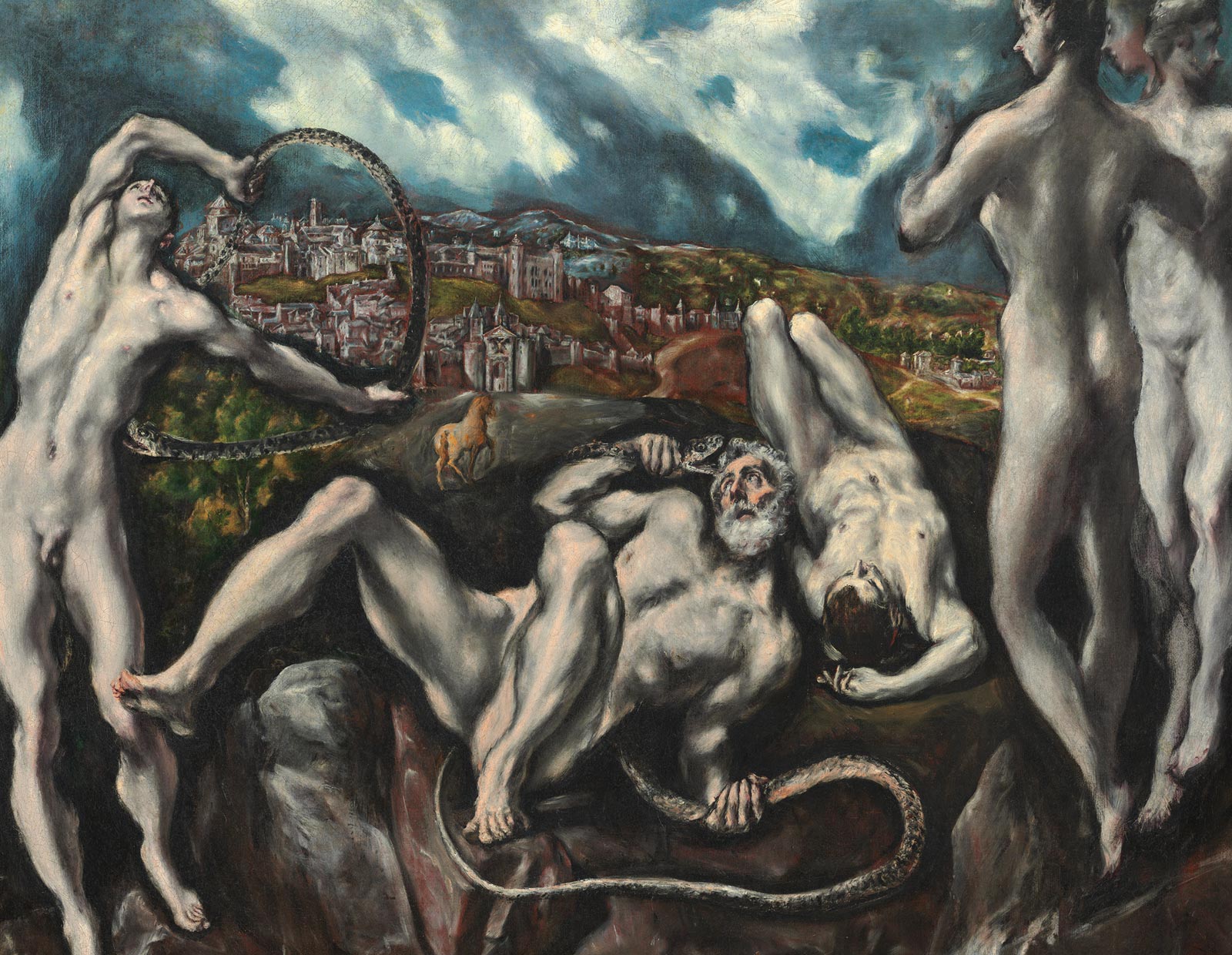 But they went on straight toward Laocoön, and first each serpent
Seized in its coils, his two young sons, and fastened
the fangs in those poor bodies.  And the priest
Struggled to help them…
They seized him, bound him with their mighty coils…
He uttered horrible cries, not even human
More like the bellowing of a bull, when wounded

In his haunting painting , depicts a violent Greek myth as if it had taken place in his adopted city of Toledo, Spain. According to Virgil’s Aeneid, Laocoön, the priest of Troy, recognized the monumental wooden horse proffered by the enemy Greeks for what it was: a trick rather than a gift. Hurling his spear at it, he implored the Trojans not to pull the horse into the city. The goddess Minerva, who favored the Greeks, avenged his action by sending two serpents to kill the priest and his two sons. The Trojans, misreading the cause of Laocoön’s death, drew the horse into the city, where the Greek soldiers hidden inside it ambushed the Trojans and laid waste to Troy.

El Greco’s painting is a study of tumult and anguish. The bearded Laocoön, sprawled awkwardly on his back, wears a look of terror as he struggles to fend off a writhing serpent, jaws agape, which lunges at his head. One son lies dead behind him. The second, at left, desperately twists and strains to keep the other serpent from piercing his thigh. The wooden horse is visible in the background (pointed to by the standing son’s outstretched hand) approaching Toledo’s gates. At the far right, two unfinished standing figures, perhaps Greek gods, witness the action without intervening.

By elongating the naked bodies of Laocoön and his sons, El Greco exaggerates their corporeality even as he renders them conceptual rather than lifelike figures. The harsh lighting, heightened by the dark paint outlining the bleached bodies’ contours, plainly exposes the men’s plight and imparts a flickering, spectral quality to their freely painted flesh. The push-and-pull between the taut, overlapping, angular bodies and the arabesques formed by the serpents together with the threatening storm clouds, the unforgiving landscape, and illogically constructed space contribute to a singularly nightmarish scene of upheaval.

The meaning of El Greco’s Laocoön remains obscure. The artist’s only extant mythological scene, it likely represents a Christianized take on classical subject matter. In substituting Toledo for Troy, El Greco may have been warning his fellow citizens not to succumb to some contemporary treachery, perhaps religious practices he viewed as antithetical to Counter-Reformation edicts. Doubtless familiar with the renowned ancient sculpture of Laocoön that had been uncovered in Rome in 1506, the famously self-confident El Greco may have tackled the same subject to demonstrate that his artistic abilities were equal to those of anyone in history.

Domenikos Theotokopoulos, known as El Greco (the Greek), was born and raised in Crete, which was then part of the Venetian Republic. He trained as an icon painter in the Byzantine tradition and by 1563 had become a master painter. El Greco left Crete for Venice in 1568 to study Western painting and was especially influenced by the rich palettes and sketchy styles of Tintoretto and Titian. Two years later he arrived in Rome, where he became intensely interested in the major humanist and philosophical questions of the day. El Greco stayed in Rome for seven years, and even opened a studio, but failed to win public commissions. Notoriously prickly and outspoken, El Greco reportedly offended influential Romans after declaring that the city’s much-beloved Michelangelo did not know how to paint. Soon after, El Greco went to Spain.

In July 1577 the artist arrived in Toledo, where he quickly came in contact with a circle of learned churchmen who appreciated his work. By 1585 he had established a workshop that produced altar frames and statues as well as paintings. He received numerous commissions from religious institutions in and around Toledo and private individuals sought him out both for devotional images and for his acclaimed portraiture. He lived and worked in his adopted home of Toledo until his death in 1614, after which his son took over the workshop.

Online Tour
Works by El Greco in the Gallery's collection

A fascinating and erudite artist who knew several languages, El Greco was renowned during his lifetime for his artistic originality and his extravagant lifestyle. His large religious works fuse Venetian color and Roman monumentality in fantastic, vertiginous compositions that convey a sense of the miraculous. While closely associated with the spiritual zeal of the Counter-Reformation, El Greco was also a painter-philosopher fundamentally concerned with the artistic and intellectual questions surrounding the means and purpose of artistic representation. His subjective, mannered style of painting, featuring elongated, intertwined figures and non-natural colors, emanated from his understanding that art should engage the intellect rather than slavishly copy nature.