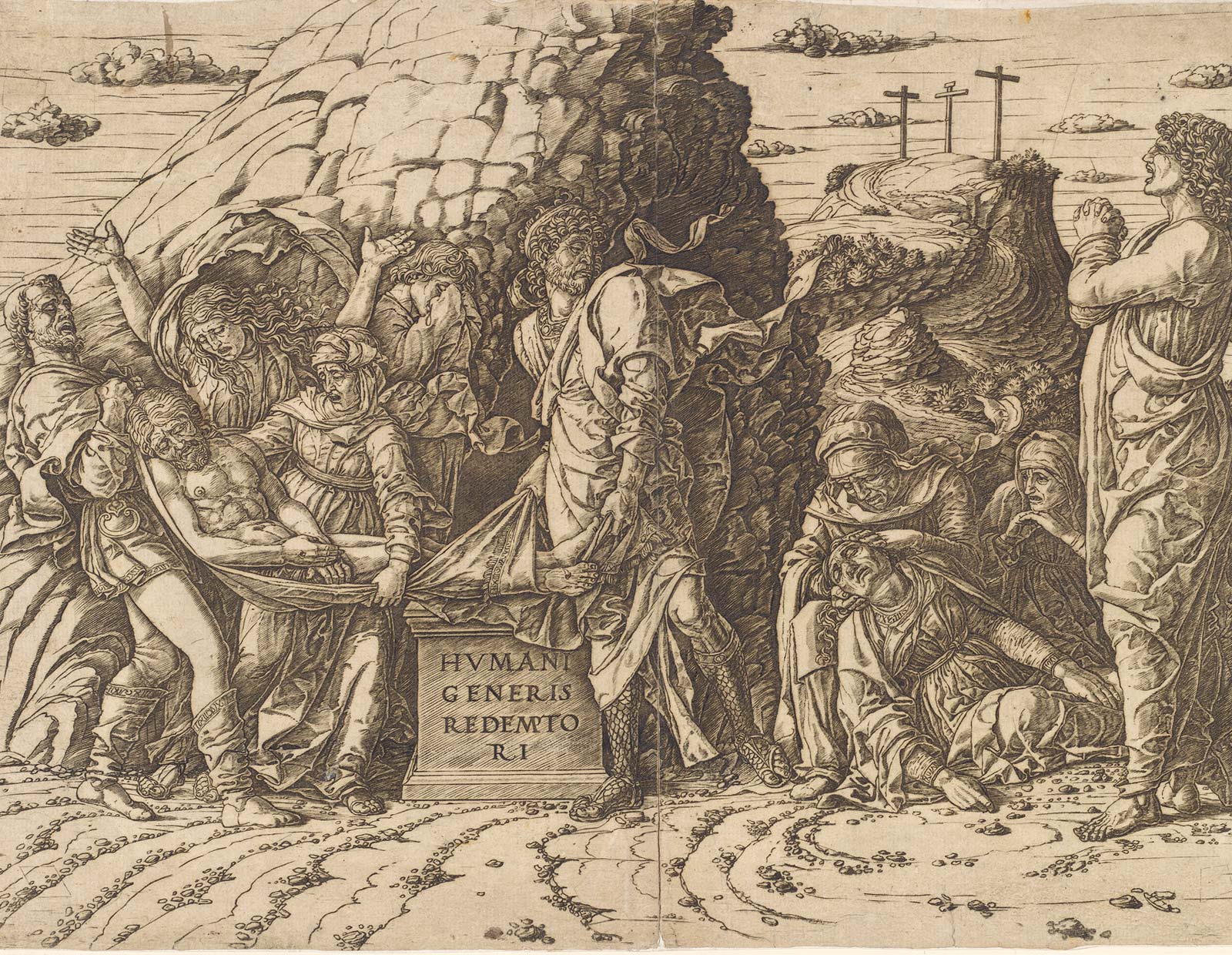 In each work he set himself new problems, fighting shy of no difficulty, but rather seeking them out only in order to overcome them....

, one of the most acclaimed painters of the early Renaissance, decided sometime around 1470 to tackle a new medium—the recently invented and technically daunting process of copperplate engraving. The austere and pathos-filled , though likely one of his earliest efforts, already exemplifies with its dynamic composition, innovative technique, and dramatic expression of lamentation how Mantegna definitively transformed printmaking from craft to fine art. The print’s influence has been profound; Raphael, Michelangelo, and Rembrandt, among others, used Mantegna’s Entombment as a model. The Entombment embodies overwhelming spiritual grief. Ten stricken figures are ranged horizontally, like an antique frieze, against a stark, rocky landscape. At far left, Nicodemus strains under the weight of Christ’s upper body as he maneuvers the corpse, wrapped in a loin cloth, toward a sarcophagus. Mary Magdalene, her arms flung out, her head down, wails in agony. An older woman, wearing a pained expression, helps guide the lifeless body, while a male youth near the mouth of the burial cave covers his tearful face with the edge of his robes.

Joseph of Arimathaea, standing before the cave’s entrance and bearing Christ’s body at the feet, is the composition’s fulcrum. With his face a picture of absolute despondence, and his fluttering robes seeming to echo his inner turmoil, he twists away from the corpse and toward the figures at the right—as if he cannot bear to confront Christ’s death. At right, the collapsed Virgin Mary is supported by two kneeling women; their limp forms contrast with the upright stiffness of a despairing Saint John, his mouth agape in a howl of sorrow. In the background, we see the lonely crosses and the curving, rutted road the burial party has followed from crucifixion to cave. Mantegna’s confident line—clear and hard—emphasizes the anguish and agitation of the scene. The stunning clarity of detail in the figures’ tormented expressions, defined musculature, wind-blown drapery, and sharp contours is matched by that of the intimidating rock formations. By incising lines of various patterns and depth into the resistant metal engraving plate, Mantegna achieved a range of light and dark tones that convincingly describe the figures and define the space they occupy.

An avid student of ancient Roman monuments, Mantegna derived from their example some of the figures’ poses, as well as the chiseled lettering of the Latin inscription on the sarcophagus (which translates, “To the Redeemer of the Human Race”). The seemingly purposeful sternness of the composition, especially as evidenced in the hard, sculptural quality of the figures, reflects Mantegna’s embrace of the antique as a model of both moral probity and aesthetic values.

Engraving is an intaglio printmaking process in which the design is incised directly into the surface of a metal plate, usually copper, with a sharp graver or burin. The ink is spread on the surface of the plate and carefully wiped off until it remains only in the incised areas. The ink is transferred from the incisions to the sheet of paper by means of a printing press.

More Works by Andrea Mantegna in the Collection