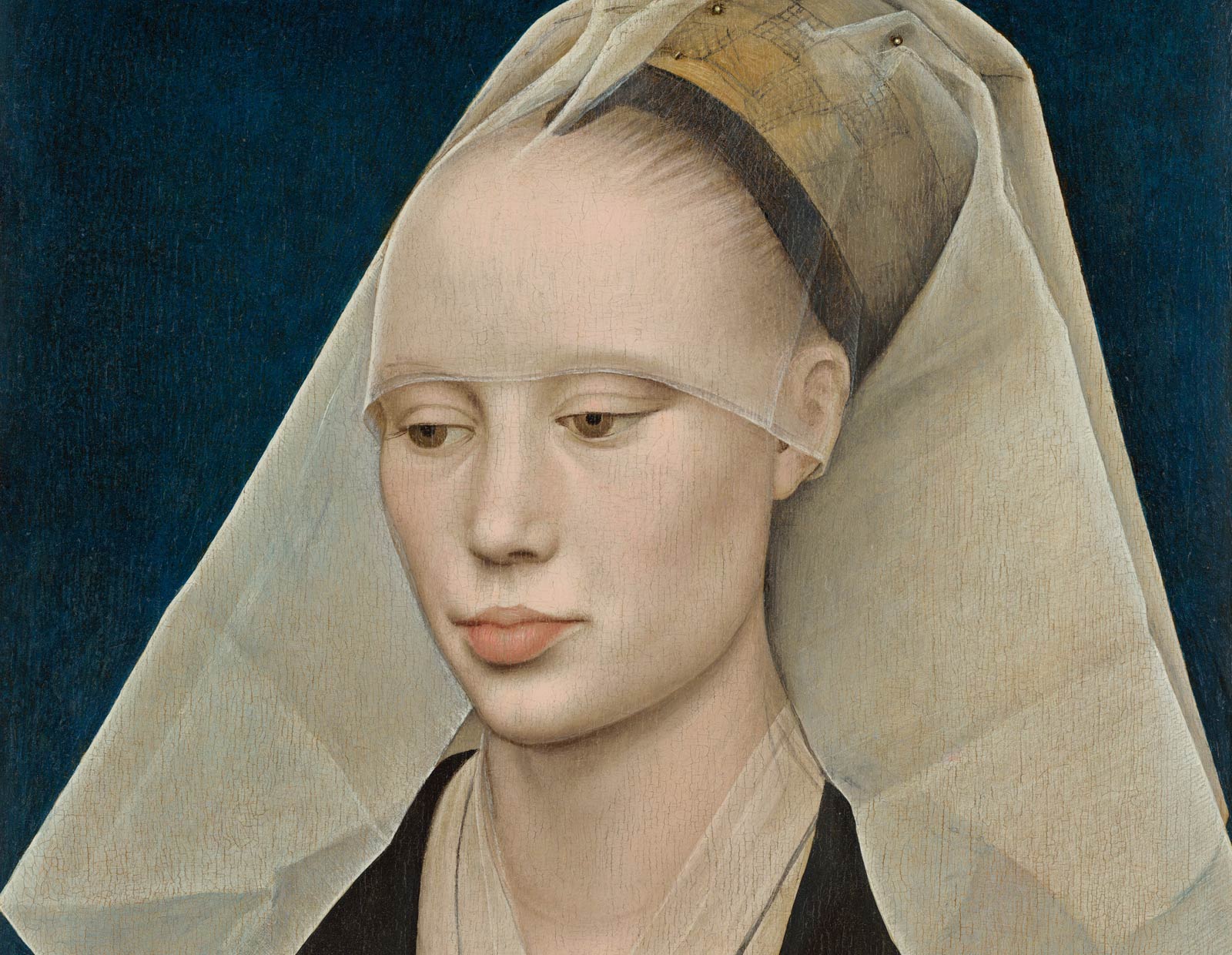 Portrait of a Lady

The gold filigree decorating her belt, the folds creasing her transparent veil, her delicate lashes, all seem very real. Yet we sense that this woman is at some remove from the world and from us. Her down-turned eyes and nervously pressed fingers suggest introspective emotion. Triangular forms abstract and flatten her image, giving it a formal elegance that underscores her aristocratic reserve. A view of the Burgundian court
The miniature on the dedication page of the Chroniques de Hainaut is believed by many to have been painted by Rogier. If so, it would be his only surviving manuscript illustration. Philip the Good stands beneath the canopy. With him, on his left, are the 15-year-old son who would succeed him as duke, Charles the Bold, and probably his older, illegitimate son, Antoine, the Grand Bastard of Burgundy.

Her name is lost to us, but she was likely at the court of Philip the Good, Duke of Burgundy. The court was the mid-15th century’s most magnificent and established tastes for virtuosity and refinement across Europe. , celebrated by contemporaries for the invention and intensity of his religious paintings, produced a number of portraits at the Burgundian court at the end of his career, from about 1450 until his death in 1464, apparently including this one. Their spare formalism and mannered aspect were well matched to an aristocratic ideal of control, which was itself no less an expression of power than the lavish displays of luxury textiles, gold, and gems for which the dukes of Burgundy were known.

These portraits, with one exception, depict members of the Burgundian court. Some were made as independent portraits, others as parts of diptychs, and some are copies made after Rogier’s now-lost originals.

Philip the Good was Duke of Burgundy from 1419 to 1467. This is a copy of Rogier’s portrait. The duke wears the gold collar of the Order of the Golden Fleece, which he established.

Isabella of Portugal was the wife of Philip the Good and mother of Charles the Bold. This is a workshop copy of Rogier’s portrait. Some believe that she is depicted in Jan van Eyck’s Annunciation in the National Gallery of Art.

Charles the Bold was Duke of Burgundy between 1467 and 1477. Rogier painted him before the death of his father, Philipthe Good. Charles was also known as Charles the Rash.

Antoine, Grand Bastard of Burgundy, was an illegitimate son of Philip the Good (one of many). He holds an arrow that signifies his victory in an annual sporting contest for which he received the title of the “king’s archer.”

Francesco d’Este was the illegitimate son of Lionello d’Este, Duke of Ferrara. He was raised in and spent most of his life at the Burgundian court. The hammer he holds is connected with tournaments, the ring perhaps a tournament prize.

Jean de Gros would later serve Charles the Bold, becoming powerful but strongly disliked. His portrait was part of a diptych with the Virgin and Child.

Philippe de Croÿ served both Philip the Good and Charles the Bold, although his family’s relations with the dukes were at times strained. A contemporary described him as proud, eloquent, ambitious, and clever. His portrait was part of a diptych with the Virgin and Child.

Jean de Froimont was a friend of Philippe de Croÿ, who appointed him as guardian of Philippe’s children in the event of his death. His portrait was part of a diptych with the Virgin and Child. Sharp, interlocking shapes produce a severe balance of form in this portrait. Notice how the fall of the veil over the sitter’s shoulders responds to the V of her neckline, and how her body divides the deep blue-green of the background into framing triangles. The alternation of black and white in her dress, bodice, and veil are relieved only by a red belt (which x-rays show was altered from her original even more slender waist). The shallow planes of her face, painted in a spare, linear manner, are made more abstract by the exaggerated proportions created by then-fashionable plucked brows and hairline. She is defined more by contours than by three-dimensional forms, except in her full, sensual mouth. Compare the less abstract quality of this portrait painted earlier in Rogier’s career. Some have suggested it represents the artist’s wife. She exhibits none of the aristocratic hauteur seen in the National Gallery picture.

Many of Rogier’s portraits were parts of devotional diptychs, a form he helped popularize. In these hinged two-panel works, the sitter, typically on the right, was depicted in prayerful attitude toward a religious image, usually the Virgin and Child, on the opposite panel. This painting, however, may have been an independent portrait because the woman’s hands are not steepled in prayer. Luke was the patron saint of painters, and it is possible that Rogier used his own likeness for the saint's face.

Little is known about the life of Rogier van der Weyden. While a few of his paintings can be documented, not a single signed or dated work survives. He was, however, together with Jan van Eyck, the greatest painter working in the Low Countries in the 1400s. His inventiveness and emotional intensity influenced other artists well into the 16th century.

Born in Tournai in 1399 or 1400 to a family of the rising merchant class, he may have received a university education. He began his artistic career uncharacteristically late for the period, entering the workshop of Tournai’s foremost painter, Robert Campin, when he was already 27 years old. In 1432 he was accepted by the guild as an independent master, and by 1435 had moved to Brussels, his wife’s home, where he was appointed official city painter the following year. He lived in Brussels for the rest of his life but during the Jubilee year of 1450 he traveled to Italy and enjoyed an international reputation.


Essay
The Burgundian court by the Metropolitan Museum of Art

Rogier combined the detailed and meticulous style of his teacher Campin and of Van Eyck, whose work he knew, with an emotional resonance that responded to contemporary religious trends such as the devotio moderna (which stressed meditation and inner life) and the writings of Thomas à Kempis, which emphasized a direct and personal connection with Mary, the saints, and the sufferings of Christ. Rogier’s graceful and expressive figures are set in stark settings and shallow planes; austerity lends them a haunting quality.

Rogier’s most celebrated works are large altarpieces, but he also painted smaller devotional pictures and secular subjects, including civic murals (now lost) for the city of Brussels. Toward the end of his career he created a number of elegant portraits for the Burgundian court, many of which were paired in diptychs with devotional panels.