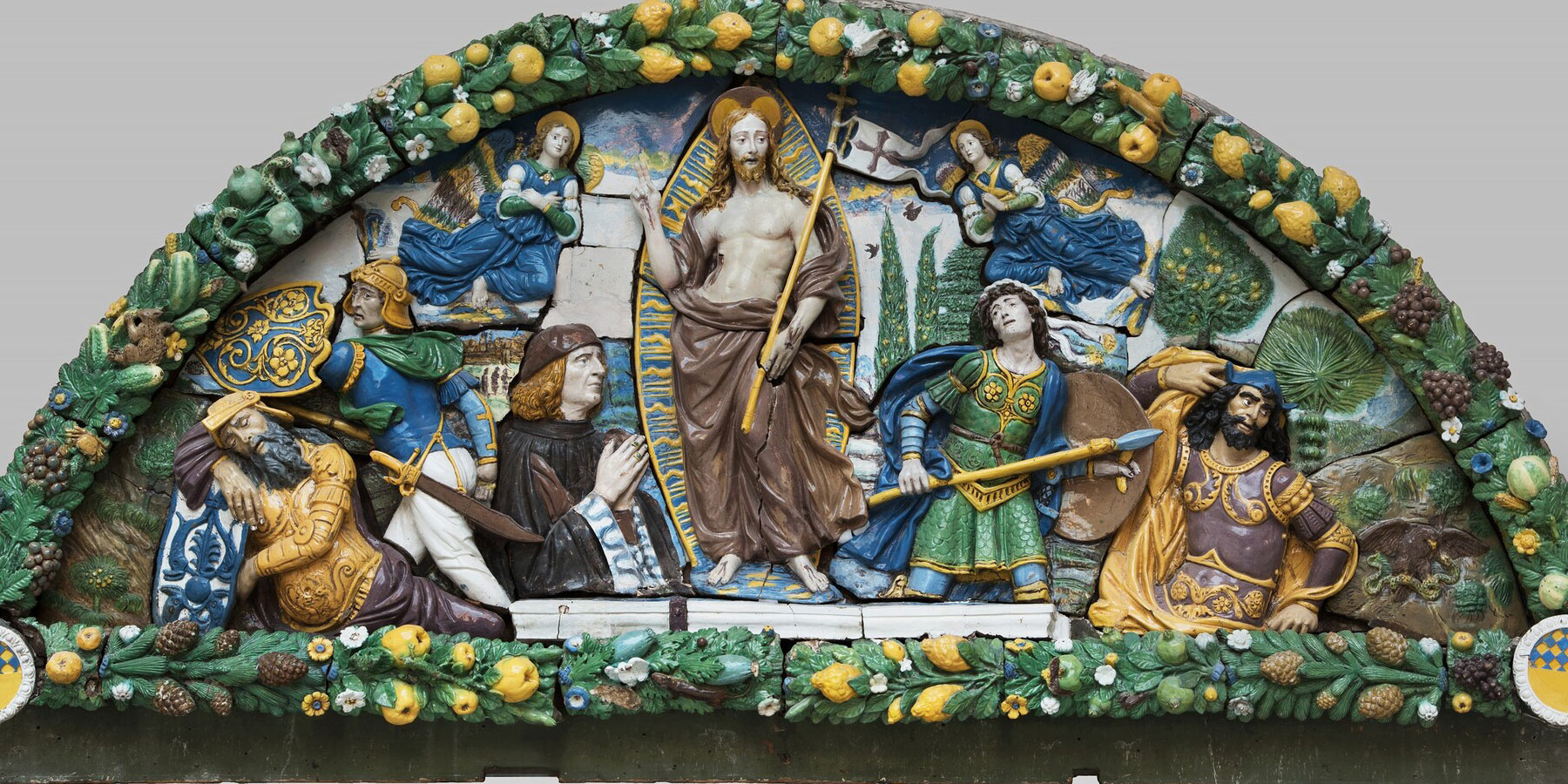 In the rich artistic culture of 15th-century Florence, the sculptor Luca della Robbia (1399/1400–1482) won renown for his innovations in the medium of glazed terracotta. Praised as “new, useful, and most beautiful,” this distinctive technique involved the application of colorful, reflective glazes to sculptures in fired clay. Luca’s methods established a durable and shining surface for ceramic sculpture of many kinds, from independent statues in the round to narrative reliefs and architectural ornament. His family workshop specialized in depictions of sacred history and devotional images of the Madonna and Christ child for a variety of settings, including altars and chapels within churches, exterior walls and gates, and the domestic realm. The sculptures’ humble materials expressed the spiritual value of humility, exalted by a luminous surface, while the skill with which they were fashioned and the visual clarity of the medium made them easy to read and understand. Through pure, expressive color and a refreshing simplicity of means, Della Robbia terracottas illuminated themes of salvation through Christian faith.

Luca collaborated closely for decades with his nephew, Andrea (1435–1525), who entered his workshop by 1451 and inherited it in 1482. Five of Andrea’s children joined the enterprise, carrying the family’s art into the 16th century. As their range of commissions grew, the Della Robbia increasingly explored other genres, such as portraiture, still life, landscape, and allegory, alongside canonical religious subjects. Della Robbia sculptures still grace the churches and squares of Florence and other Italian cities, while portable reliefs, statuettes, and busts by the family adorn museums throughout the world. This major loan exhibition is the first devoted to the Della Robbia in the United States, where a newfound appreciation for the beauty and ingenuity of Renaissance glazed ceramics emerged in the 19th century and continues today. The Italian term terracotta (“cooked earth”) refers to objects produced by sculpting clay and then firing it in a kiln at high temperatures to harden the material. During the Renaissance, terracotta was believed to be the oldest form of sculpture, invented in the ancient world. Luca della Robbia perfected the technique of coating terracotta in durable, colorful glazes that fused with the clay below and lent the surface a particular brightness and shine. His younger contemporary Leonardo da Vinci praised these glazes, seeing the method as a way for painting to achieve the permanence of sculpture. The characteristic look of Della Robbia terracottas was described by the 19th-century writer Walter Pater: “I suppose nothing brings the real air of a Tuscan town so vividly to mind as those pieces of pale blue and white earthenware . . . like fragments of the milky sky itself, fallen into the cool streets, and breaking into the darkened churches.”

The recipes for glazed terracotta were closely guarded workshop secrets developed over decades and used by the Della Robbia family for about a century. The first step in the process was gathering earthen clay from riverbeds. Luca set a standard by seeking out the finest quality of clay available, a light-colored, chalky variety that bound particularly well with his lead-tin glazes. He then refined the clay through cleaning, sifting, and the addition of soft river sand. This presentation provides a virtual walking tour of Florence, Italy, where many important works of Della Robbia sculpture remain immured in their original settings and cannot be transported for exhibition. During the 15th and 16th centuries, the family’s terracottas adorned palaces and public spaces throughout their native city. The patronage of the ruling Medici clan enhanced the prestige of glazed terracotta, and the medium was also prized by guilds and religious institutions for its beauty, legibility, and durability. Commissions for large-scale decorative schemes embedded in the walls of buildings brought the workshop into collaboration with other masters of 15th-century Florentine art, such as the architect Filippo Brunelleschi (1377–1446). Even today, sculptures by the Della Robbia figure prominently in the fabric of Florence, from street corners to the cathedral.

The cathedral of Santa Maria del Fiore is the quintessential monument of Renaissance Florence, its towering masonry dome faced with terracotta tiles rhyming with the warm brick and stone of the city and complementing the green and blue tones of the surrounding hills.

The exhibition, Della Robbia: Sculpting with Color in Renaissance Florence, is on view in the National Gallery of Art's West Building February 5 – June 4, 2017.